All in One Rankings : Team Level

All in One Rankings: Team Level Introduction

This article is the first of 3 that shows you my journey using my ALL in ONE (AIO) rankings analysis. I have gathered using meta-data processes current Dynasty, PPR, NON-PPR, and Half PPR rankings.  I placed all these rankings into the same numerical scale of 100 to 0 (best to worst). This normalization allows us to build landscape views of Teams, Positions, and Players. As an aside, I am researching this ALL in ONE deeper and will report in my textbook for 2020!

I calculated the median of the 4 rankings data streams and that result is highlighted under the Median column.  The is a meta-data metric for a landscape view. I note the closeness of many of these rankings. I propose that most of these rankings are close enough to have no significant differences.

Teams were sorted by their median score (high to low-green or blue to red). I annotated the Teams as well by colorization and 4 large segments are shown.  *high to low

LAC stands out as above the league by 8% points followed by KC and HOU at a second tier. LAR is at the 3rd tier and ATL/CLE/CHI/NO/PHI are within the 4th tier. All these teams have key players that hold value in 2019 and in the future as well.

The Bottom Teams will have lesser valuable players in 2019 and further. WAS is the lowest-ranked team followed by MIA. The public universally are “bearish” on these teams. Note that ATL seems strong but note the 48 ranking for dynasty rankings. Good players, that are going stale?  NYG and DEN are highest in dynasty rankings.  Mark the team’s strengths and weakness as you dig into the rankings.

I would consider the tiers of teams and question the reasons for that median ranking.

Remember we are including all rankings within the AIO ranking, thus a poor outlook for dynasty must have some bearing on 2019’s redraft value. My Player AIO rankings are coming soon allowing us to dig deep.

For example, consider the distance between the dynasty and PPR rankings. A larger distance implies not of much use this year. Having a low dynasty rank but a high PPR redraft would imply to me to use and trade after a great week. This can max your trade value.

All in One Rankings: Team Level Positional Values

I report in these next series of tables, each team’s positional AIO Metrics, Median AIO, and Ratios of RB vs WR, TE vs WR, and WR vs RB. These ratios using the AIO ranking give us a view into 2019 and beyond’s a Team’s uses of its positions. Draft RBs/TEs/WRs on teams with high usages etc.

Also a measure of long-term value (Dynasty/Redraft) metric is detailed. I cover this new metric in the next block.

Important Clues To Be Gathered for each Team Using these Data Tables. (Colorization High to Low)

I would print these tables and mark up your draft sheets to note highs and lows in RB TE and WR team usages predicted from the AIO rankings. 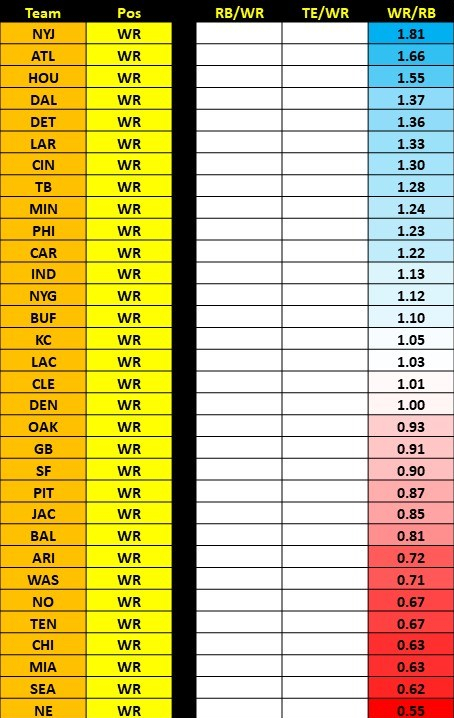 This metric can about during some related research that I will print in my 2020 textbook. A hint is the question was are rankings useful for other worlds? Can redraft or dynasty inform us about the other world?

I suggest that rankings can get us a level of information for other drafting schemes.  Thus I now propose that dynasty vs redraft rankings can give us a view beyond 2019. In later articles using players this ratio really “said” hey here is a player that is more favored in dynasty than redraft? Why? I suspect dynasty rankings I gathered had some very informed opinions that redraft players did not share in intensity.

The plot below looks across at the team level first using the D/R ratio. If there was complete agreement. I would predict a smooth trend. The plot below reveals a trend that was rougher than I expected.

I note that MIN was at 1.4 (40%) skewed to dynasty vs redraft. Dynasty rankers are very bullish on the longer-term of key MIN players!  Tier 1 level ratio. Many teams seem to have some bullish sentiment as well. CAR/DET/SEA/DAL/SF/NO/HOU all are at 1.2 (20% above average)

I assume that ratios of 1.1 to 0.9 are average. I also suspect the 0.8 and below are teams with danger signals (bearish) for dynasty drafters in 2019 for TEN/ATL/BUF/MIA. 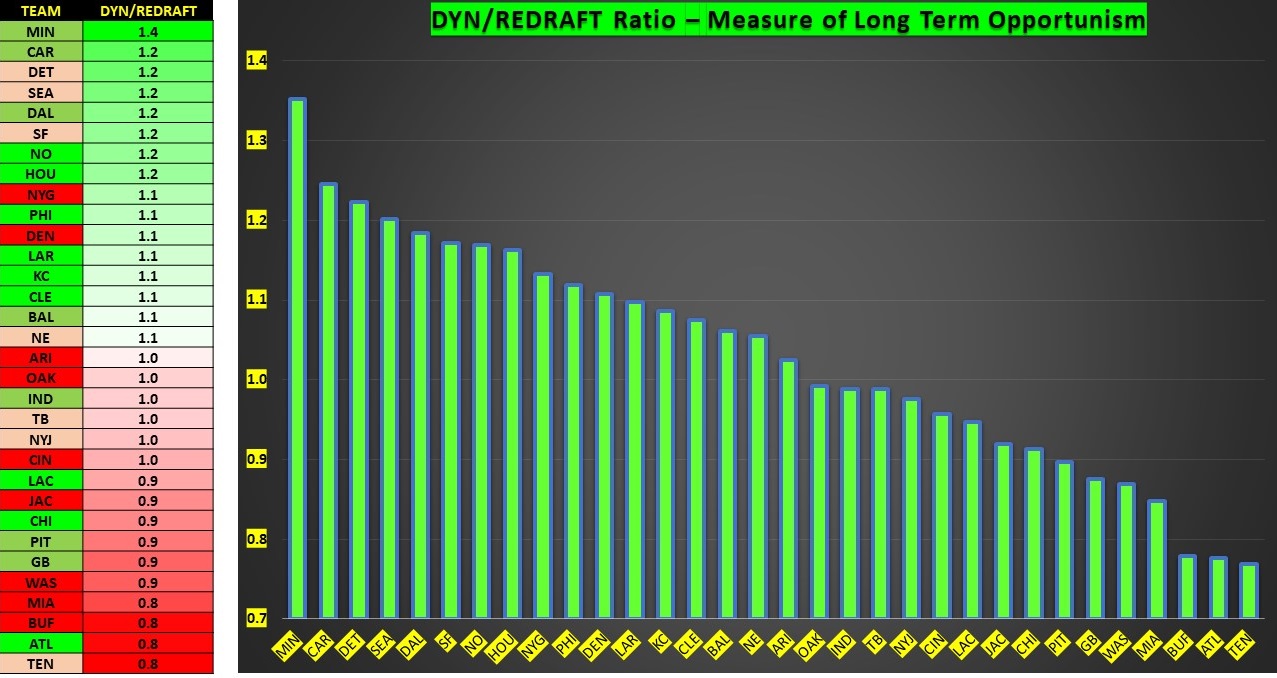 (I use the top-down approach as that is best for system-level analysis FYI. You must see the entire ecosystems for your deeper analysis. Many in the FF Biz skip to the bottom-up and your view I think it made murkier.)

Extending further down we get a better sense of the Bull vs Bears sentiments in dynasty.  I design the tables below to focus on QB/RB/TE/WR levels. I sorted the D/R ratios from high to low and annotated the extremes with Bulls (green) or Bears (Red). The average sentiment is clear.

I would use to also “prune” my dynasty teams in 2019 and beat the rest of your league. Now is a great time to trade etc as most FF players are going to be at a very optimistic level.

Fun Research in my textbook!

If you liked a metric-driven view of Fantasy Football check out my 2000 page textbook!