Nebraska Senior Running Back, Ameer Abdullah, is a dynasty star in the making.

Ameer Abdullah had been in big games before.

But this one was different.

This, in fact, was not a big game – that is, until the game started.  This was Big Red Nation versus a team whose stadium holds less than 18,000 persons.  This was 867 all-time wins and five national titles against Southland Conference FCS member.  To put this in perspective, this was David and Goliath.

This was Nebraska versus McNeese State, and with 20 seconds left in the fourth quarter, the Cornhuskers found themselves in a 24-24 tie with the Cowboys.  Nebraska was heading to overtime against McNeese State. And then it happened.

Nebraska was able to avoid a huge upset on that day simply by Abdullah doing what Abdullah does.  He was the best player on the field when it matters the most.  That ability has been a constant in Abdullah’s career through high school and college and will likely enable him to continue his career as a long-time NFL player – and most importantly to you, a future dynasty fantasy football star!

In the fall of 2010 and the winter of 2011, Abdullah figured that offers from SEC schools would come.  He had just finished a senior season that saw him rush 157 times for 1,795 yards and 24 touchdowns.  He also caught 33 passes for 515 yards and returned four punts for touchdowns for Homewood High School, a school located a mere sixty miles from Tuscaloosa and only a two hour drive from Auburn University.

Fans of both schools, especially Auburn  were perplexed that the versatile Abdullah did not receive more of a look from the SEC powers. Each school eventually signed only one back in the 2011 class. The Tide signed Dee Hart and the Tigers landed Tre Mason. Word was that both schools were concerned regarding Abdullah’s size (5’9″, 177 pounds at the time) and doubted his ability to be an every down back.

Rivals.com rated Abdullah a three out of five star prospect but listed him as an “athlete” rather than true running back.  While most of the state’s other top prospects headed off to a college that was close enough for friends and family to visit and watch games, Abdullah made the 900 mile trip to Lincoln, Nebraska.  He arrived with little fanfare, especially compared to fellow running back signee Aaron Green who was rated by Rivals with five stars and by espn.com as the nation’s 11th best overall prospect in 2011.  Still, it was Abdulla that shone early and continues to shine. 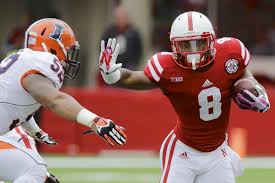 Abdullah is one of the Big 10’s best

Abdulla and Green fought it out for carries their freshman year, as they backed up starter Rex Burkhead.  Results for both were modest – around 150 yards each. However, Abdulla showed his versatility by averaging 29.6 yards per kickoff return, including a 100 return for a score.

It was his sophomore year, however, that really showed the nation he was ready to be a star.  All he needed was an opportunity, and boy did he get one!  An early-season injury to Burkhead and the transfer of Green moved Abdulla to the top of the depth chart.  That season, he rushed 226 times for 1,137 and eight touchdowns.  He torched Wisconsin to the tune of 252 total yards. He also topped the 100 yard mark in six games, including tilts against UCLA, Michigan, Michigan State and Penn State.

Abdullah has not stopped piling up the numbers.

Nfldraftscout.com currently rates Abdullah as the Number 5 running back in the upcoming class, currently behind Georgia’s Todd Gurley, Wisconsin’s Melvin Gordon, South Carolina’s Mike Davis, and Alabama’s T.J. Yeldon. At this point, he is anticipated to be a second round NFL pick come the 2015 draft. 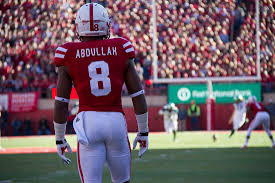 …..Bring on the Spartans

The Huskers and Abdullah play arguably the biggest game of their season this weekend as they travel to East Lansing for a match-up with defending Big 10 Champion Michigan State. Depending on how the season plays out, this could be the first of two match-ups between Abdulla and the tough Spartans rush defense.

Nebraska does not play Ohio State in the regular season, but they do play at Wisconsin on November 15th.  These two games against solid, respectable defenses will go a long way in determining Abdulla’s draft status — and more importantly — determine his value as a dynasty fantasy football asset.

(Note: This is the third installment of a multi-part series that features the top draft-eligible college football stars. A new article will be posted every other Wednesday, throughout the season. To view previous articles, please click here:  Sammie Coates and D’haquille Williams; Todd Gurley)