(This is the first installment of the Future Dynasty Stars series that will feature this season’s top draft-eligible college football stars. A new article will be posted every other Wednesday throughout the season).

Making an appearance in the first Future Dynasty Stars installment are two budding dynasty prospects.  One is from Leroy, Alabama, a town located about 60 miles to the north of Mobile, with a population of just under 1,000.  The other hails from LaPlace, Louisiana, a suburb of New Orleans right along the Mississippi River.

One stands 6’2”, weighs in at 205 pounds, and was recently hand-timed in the forty-yard dash at around 4.3 seconds.  The other is also 6’2” but a little bulkier at 220, and excels at running through and jumping over defenders rather than racing past them.

One was a key member in Auburn’s run to the National Championship Game last season and finished third nationally in Yards per Reception.  The other spent the last two seasons playing for Mississippi Gulf Coast Community College.

They are Sammie Coates and D’haquille Williams, Auburn’s current day version of Brooks & Cribbs, Jackson & Fullwood, and Carnell & Ronnie.  However, these two do not carry the football for Running Back U — they catch it.  Both are potentially first round NFL draft choices.  If you play the Dynasty format of fantasy football, both should be on your radar – possibly as soon as next Spring.

In 2014, Auburn became the first team from the Southeastern Conference to lead the nation in rushing.  The Tigers ran over, through, and around opponents to the tune of 328 yards per game.  They ran for 545 yards against Missouri in the SEC Championship Game.  They gashed Georgia for 323 yards, Alabama for 296 yards, and FSU for a mere 232 yards in the National Championship Game.  While Nick Marshall and Tre Mason were getting the bulk of attention from opposing defenses, Coates was running free in the secondary.  After recording only six receptions as a redshirt freshman in 2012, he exploded onto the scene in 2013, catching 42 balls for 902 yards (21.5 Yards per Catch) and seven touchdowns.  Auburn has other adequate receivers in the program (Ricardo Louis and Quan Bray, to name a couple), but no one quite special enough to keep teams from double-teaming Coates.  That is, until now.

Marshall returns for his second year as Auburn’s starting quarterback and all reports indicate that he has significantly improved his accuracy over the past year and is much more comfortable with the offensive system.  Jeremy Johnson, a talented Sophomore who is much more of a pocket passer than Marshall, figures to play more in 2014 than he did last season.  In fact, Johnson will start the season opener against Arkansas as Marshall sits out at least a portion of the game for disciplinary reasons.  It should be noted that the Razorbacks finished 2013 as the nation’s 79th rated pass defense, allowing 246 Yards per Game. 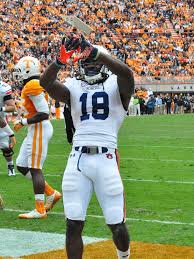 It was a typical five-yard hitch route on a first and ten play.  Marshall threw to his left to Coates, who caught it and turned up field toward Texas A&M cornerback De’Vante Harris.  Now, observers had seen Coates make plays before that showed off his great speed (having already registered five plays of 35+ yards season-to-date), but this particular play showed everyone just how physical of a player he really is.

Midway through the third quarter against the Aggies, Coates made a truly spectacular play.  On 2nd and 16, Marshall tossed a bubble screen to his left side and Coates followed three of his blockers.  He made one quick move to his right, split numerous blockers and defenders, and raced to the end zone as fast as I have ever seen a human sprint while wearing football gear.

Locals from the South Alabama area have been familiar with Coates’ freakish abilities for many years. In addition to being the local high school football hero, Coates also excelled on the basketball court and the baseball diamond, where his fastball was clocked at 95 mph his senior season.  In fact, if Coates weren’t starring on the gridiron for the Tigers these days, he would likely be playing professional baseball on some level.

Nfldraftscout.com currently rates Coates as the top wide receiver and the ninth best overall prospect in next year’s draft class. With more pass plays called for Auburn in 2014, it is conceivable that Coates will inch his way up draft boards over the next couple of months. If he shows at the Combine as most expect him too, a top five pick – or even the number one selection overall – is not out of the question.

Observers who have watched Williams (nicknamed “Duke”) in Spring Practice and Fall Camp rave about his rare combination of size, brute strength, and route-running abilities.  Comparisons and high expectations remind us of Michael Irvin, Terrell Owens, and Anquan Boldin. He’s a super-athletic and strong guy that is fast enough to run past you but much more likely to overpower you at the line of scrimmage.  He can also out-jump you on a 50/50 ball.

In 2012, Williams was arguably Louisiana’s top high school prospect.  Playing for East St. John High School, he finished his senior season with 1,495 Yards Receiving and 25 touchdowns.  Yes, TWENTY FIVE TOUCHDOWNS.  However, Williams spent his freshman and sophomore years at a school that ended up losing its accreditation.  He lost all class credits for those years, and any chance of him signing with a Division I school out of high school was gone.  So, Williams went the JUCO route and became a star and a legend around the south Mississippi campus.  He recorded 67 receptions for 1,295 yards and 17 touchdowns in his first year.  Williams followed that up with a 51-733-9 line, leading to his All-American status and a consensus No. 1 ranking nationally among junior college players.

While Williams is certainly the lesser known player of the duo and has not played a down of major-college football, the excitement surrounding him is real.  Now, I won’t bore you with grainy video from junior college games, but if you cannot wait until Saturday to see Williams on display, check out this eight second clip of Duke’s one-handed grab he made earlier this month in practice.

It should be noted that both Coates and Williams will be juniors this season. However, Auburn coaches and program observers believe that one or both are likely to declare early for the NFL after the 2014 season. The star receivers will have plenty of opportunities to display their special talents this fall as the Tigers play seven teams ranked in the USA Today Preseason Coaches and Associated Press Polls. Marquee games include a Thursday night tilt at Kansas State, home games against LSU and South Carolina, and road games at Georgia and Alabama.  If Coates plays like he did last season, Williams is as good as he appears to be, and if Marshall is more consistent and accurate, then Auburn is a good bet to find itself back in the SEC Championship Game and with a potential spot in college football’s first ever Final Four.