Todd Gurley Soars Over a Defender

Players, coaches and fans of the Clemson Tigers have seen just about enough of Todd Gurley.

First there was this:

Despite Gurley’s 154 yard, two touchdown performance, the Tigers were fortunate enough to win a 38-35 shootout on that hot August night in 2013.

Fast forward one year to the 2014 version of the Georgia-Clemson rivalry, the season opener for both teams.  Unfortunately for the Tigers, there was a much different outcome than the previous year:

You get the picture. The Bulldogs’ junior running back once again burned UGA’s rival to the East. This time it was to the tune of 198 yards and three touchdowns on the ground to go with his 100 yard kickoff return that tied the game after Clemson had taken a 21-14 lead.

If you are a college football fan – particularly one that lives in the South or cheers for Georgia – you are undoubtedly already familiar with Todd Gurley. However, dynasty owners that do not have the time to devote to watching college football may not know just how good Gurley is and just how good he projects to be at the next level.  He will be one of the first players taken in the 2015 NFL Draft and will likely be pick 1.01 in most rookie drafts next Summer.

Gurley originally hails from Tarlboro, North Carolina. After totaling 2,600 yards and 38 touchdowns as a high school senior, Gurley was obviously a hot commodity among college recruiters. He was rated a four star (out of five) by recruiting analysts at Rivals, Scout, and ESPN and was ranked as the 5th, 11th and 10th best running back in the 2012 class by the three organizations respectively. In January of 2012, Gurley committed to Georgia, choosing the ‘Dawgs over Clemson, North Carolina, and North Carolina State.

Oddly enough, Gurley was not the most coveted or highly acclaimed back in Georgia’s class that year. That honor went to fellow North Carolina native Keith Marshall, rated a five star recruit by ESPN and Scout and the 1st, 2nd and 2nd rated running back (according to Scout, Rivals and ESPN). By most standards, Marshall had an extremely impressive season for a true freshman running against SEC defenses. He ended the year with 759 yards on 117 carries and eight touchdowns. If he were playing anywhere else, people would be touting Marshall as a superstar, a future Heisman Trophy winner, and an NFL great. If he were playing anywhere other than Athens, that is. And if he were not sharing a backfield with Todd Gurley. 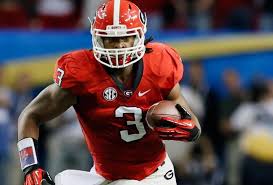 Gurley has great speed for a big back…

One Good, One Great

While Marshall was good in 2012, Gurley was spectacular. He carried the ball 222 times for 1,385 yards and scored 17 touchdowns. In doing so, Gurley became only the second Georgia true freshman to ever break the 1,000 yard barrier (Herschel Walker, in 1980, was the only other ‘Dawg to do so). He rushed for more than 100 yards in nine games; he even rushed for 118 yards against third-ranked Florida. He had 122 yards rushing and scored twice in the SEC Championship game, leading Georgia to within one play of defeating Alabama and advancing to the BCS National Championship Game versus Notre Dame.

Gurley’s sophomore season was cut short due to injuries.  An ankle injury during Georgia’s thrilling 44-41 win over LSU caused him to miss the ensuing games against Tennessee, Missouri, and Vanderbilt (the Bulldogs lost two of those three games).  Gurley returned in style against rival Florida, rushing 17 times for 100 yards, a touchdown, and catching three passes for 87 yards (including a 79 yard touchdown on a short crossing route).  He continued to show off his receiving skills by catching 10 balls for 77 yards against Auburn, five for 90 yards and two touchdowns versus Kentucky, and seven for 97 yards and a touchdown in the bowl game against Nebraska. 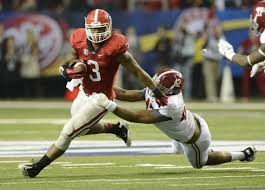 ….And great power for a speed back

What They Are Saying

“Gurley, what he does out there just dazzles you.  The combination of size and speed reminds you of Herschel.”

Others have mentioned Adrian Peterson as the player Gurley resembles the most, a comparison that makes sense when looking at the total package of size, speed, strength, hands and vision.

The latest projections at nfldraftscout.com have Gurley rated as the top running back in this year’s class and the number 18 overall prospect.  Now, we all know that the NFL Draft has not been kind to running backs in recent years.  Most observers, however, seem to think Gurley is the player to change that trend and become the first back to be drafted in the first round since 2012.

Auburn and Georgia will square off in mid-November

As noted above, Gurley and the rest of the Georgia offense absolutely destroyed Clemson’s defense and special teams in the opener. After a bye week, the ‘Dawgs lost a 38-35 thriller to SEC East rival South Carolina.  Georgia still has plenty of marquee games remaining this fall, with the biggest three appearing to be October 11th at Missouri, November 1st versus Florida, and November 15th when UGA hosts defending SEC Champion Auburn.

Even after Saturday’s loss in Columbia, the ‘Dawgs are still (at worst) a co-favorite to win its division.  With Gurley leading the way, Georgia is as good a bet as any to represent the East in the SEC Championship Game on December 6.  That would mean another chance on a major stage to showcase his unique abilities.  A win there, and Gurley and his teammates will likely find themselves in the Final Four.

(Note: This is the second installment of a multi-part series that will feature the top draft-eligible college football stars. A new article will be posted every other Wednesday, throughout the season. To view previous articles, please click here: Sammie Coates and D’Haquille Williams