Peyton Manning continues to storm through offences. His only problem is if he’s benched in the 4th Q because the Bronco’s are already up by 84 points.

Knowshon Moreno has elevated himself to the #1 back in Denver after carrying the ball 17 times against the Cowboys and scoring 21 fantasy points in the process. A nice matchup against the Jags should see him as a RB8-12 this week. Hillman appears to be second in line, with Montee Ball way down the pecking order.

It’s now a case of ‘which Denver receiver will score me the fewest points’ each week. The worst of the 3 will still likely bag you 5-8 pts, so don’t bench any without good reason. This week I rank them as: Wes Welker > Demaryius Thomas > Eric Decker but you could make a case for starting all 3 (even on the same fantasy team, like Manning probably does).

Julius Thomas is becoming an absolute stud at TE. Start him this week and expect a comfortable 8 point floor. With Peyton throwing him the ball, god knows where his ceiling is, but it’s mighty high.

Broncos D/ST v the Jags is a good start. Can’t see Denver’s D/ST being out of the top 5-8 this week.

Alex Smith is sitting pretty as QB12 in fantasy so far, but he is strictly a high-floor, low-ceiling fantasy option (also making him a terrible architect). The Raiders are a reasonably soft matchup, but the worry here is an early lead reducing Smith’s attempts. I can’t see Smith getting less than 10pts, but 14-16 may be his maximum this week.

Jamal Charles would be the beneficiary of an early lead against the Raiders, and I’d start the leading fantasy RB this week without hesitation.

Donnie Avery was the 15th highest scoring WR back in week 3, and no other Chiefs WR has placed higher than that on a week to week basis. This suggests that there are no longer any real elite options at WR on that offence. The matchup again is reasonable, but Dwayne Bowe and Avery are reduced to mid to low flex plays at this moment in time due to a sheer lack of volume of targets. (between them they have just 60 targets on the season, good for 49th and 50th in the NFL for WRs)

Sean McGrath may be worth a sneaky pickup and start this week. HE faces a good matchup and will be the #1 TE option for Alex Smith with Kelce out and Fasano doubtful.

Chiefs D/ST create turnovers each and every game. Can’t see why this won’t continue against the Raiders. Play them as a top 8 D/ST this week.

Terrelle Pryor is a guy you really have to watch. Before the season I expected him to be a flash in the pan guy with few passes and plenty of runs but after watching him take apart the Chargers Defence (who are terrible v QBs it must be said) last week I am a firm believer that Pryor is the answer for Oakland in the mid to long term. This week he faces the undefeated Chiefs at Arrowhead, but you know what? I think he can snatch a win. Pryor will get between 12 and 16 points this week, and I’m starting him over Sam Bradford easily in one of my leagues. 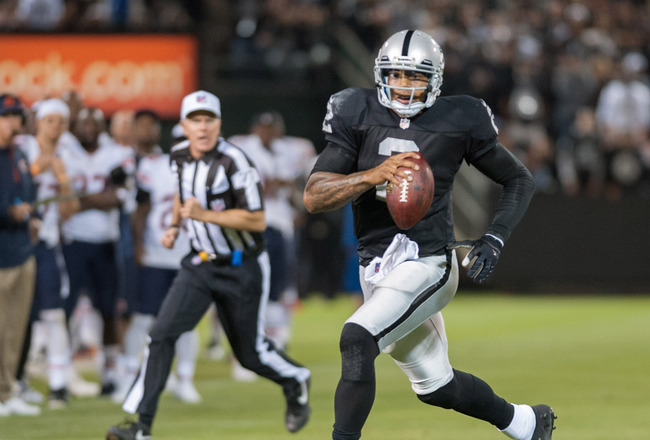 I’ve been very impressed with Pryor so far, he could cause problems even for Kansas’ strong D. – Photo from bleacherreport.com

Darren McFadden looks good to go after missing last week with an injury. Don’t be expecting wonders though as this Kansas defence is brutal. McFadden may be best utilised on short passing routes so may be a little more productive in PPR. I’d rate McFadden as RB14-18 this week.

Denarius Moore has an excellent rapport with Pryor, no doubt about it. I would be happy to start him as a mid to high WR3/flex option this week. Rod Streater is worth picking up now as he continues to be a secure outlet for Pryor. Tough to start him yet but worth stashing.

Mychal Rivera is presently a non-factor in fantasy, likely due to Marcel Reece’s healthy contribution to the passing game. Neither are rosterable at this point, though Reece becomes a little more favourable the more McFadden gets hurt.

Raiders D/ST could actually be decent this week against a pretty low powered offence… but don’t risk it. There are plenty of safer picks this week at the position.

Philip Rivers managed 18 points in the loss to Oakland, so whilst Chargers fans may be furious at his 3 INTs, use your fantasy brain and keep the faith. The Colts have been good against the pass, but haven’t been tested by a team that focuses on the pass. I’d peg Rivers at a healthy 14-18 points this week.

Danny Woodhead had nine catches and nine carries for the Chargers last week, including a TD catch. He is a good RB2 in PPR at this point, and the range of uses he’s put to (kick returns as well as rushes and routes) gives him a unique fantasy value. In non-PPR he’s just a flex though, don’t start him over your stud RBs. Ronnie Brown is worth picking up after Ryan Mathews left the field early with a concussion, but I wouldn’t rush him into your lineup so quickly.

Keenan Allen looked great for the second time and was one foot away from a second TD grab. Allen is the real playmaker on the Chargers WR corps, and could be slotted in as a WR3 at this point. Vincent Brown, Eddie Royal and Malcolm Floyd are all pretty unspectacular, each one getting around 4-6 points per week. I’d maybe roster one if you’re short at WR but don’t expect fireworks.

Keenan Allen has elevated himself above the other Chargers WR with back to back performances – photo from www.thenewstribune.com

Antonio Gates is still the best receiving option for Rivers by a long way. I’d give him TE8-12 status this week, maybe a little higher in PPR.

Chargers D/ST are still not worth rostering or starting.