The Week 1 Snaps Report gives players a view into the Team’s system. Does the team use RBs more than WRs? Does the team rely on their WRs? These are key questions for lineups, DFS plays, and waiver wire selections.

I always suggest players use a broad view of a Team’s activities. I start in this Snap Report by looking at the positions. These tables include:

The table is sorted by high (blue) scaled usages to low usages (red). The key RB using teams in week 1 were CHI/IND/CAR/ARI/JAX/WAS. The teams with weak RB usages were PHI/DET/KC/OAK/CLE/NE. Obviously, some of these teams players scored even with low usage. These metrics give more clarity as the season rolls on.

A visual key of the week 1 metrics. Interesting to see shifts in week 2.

The key teams are OAK with Waller seemly a got to grab guy? KC/MIN/BAL/PHI/NE/NO are other higher TE using teams. Concerns over ARI/CHI (Injury issue?)/DEN/CAR/PIT TEs. 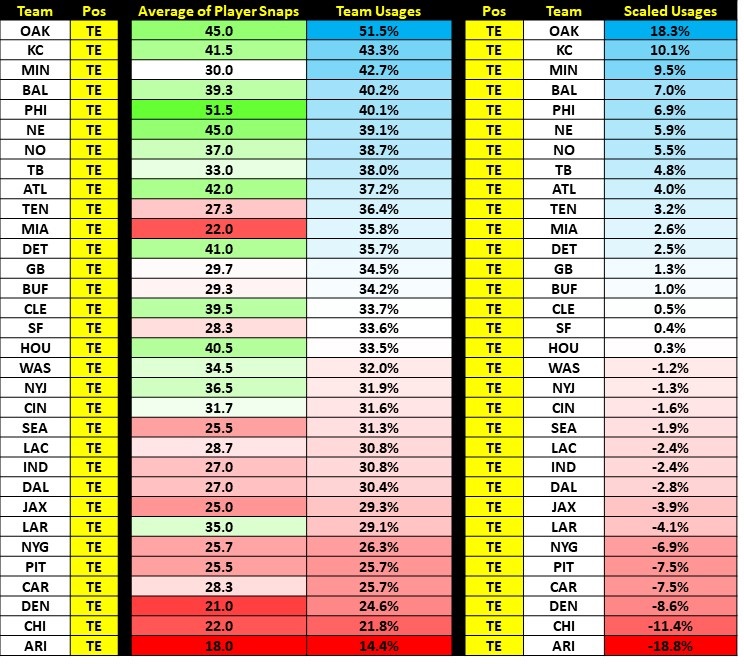 The key WR using teams in week 1 were ARI/DEN/LAR. These were top 3 teams above the league average. Watch these teams in the following weeks for level 2 and 3 WRs that will be highly used this season.

Concerns exist for OAK/IND/BAL/NO/TEN. Watch week 2 trends. Your level 2 and 3 WRs from these team might be less productivity. 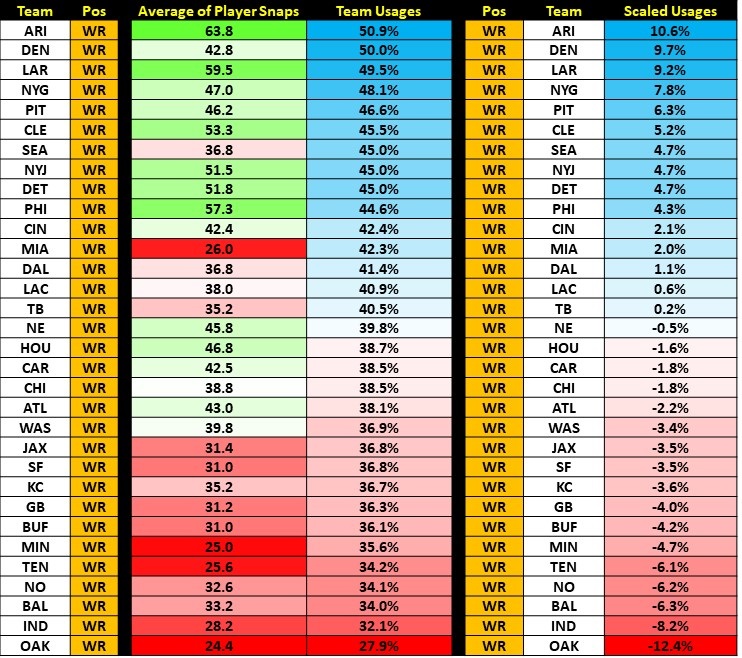 These tables present a series of key data elements.

Search for the Team extremes for a judgment call. For example, the ARI team does not use its TE (low 0.41 TE/RB Ratio and high 3.54 WR/TE ratio).

Use ratios for DFS play and seasonal long lineups. 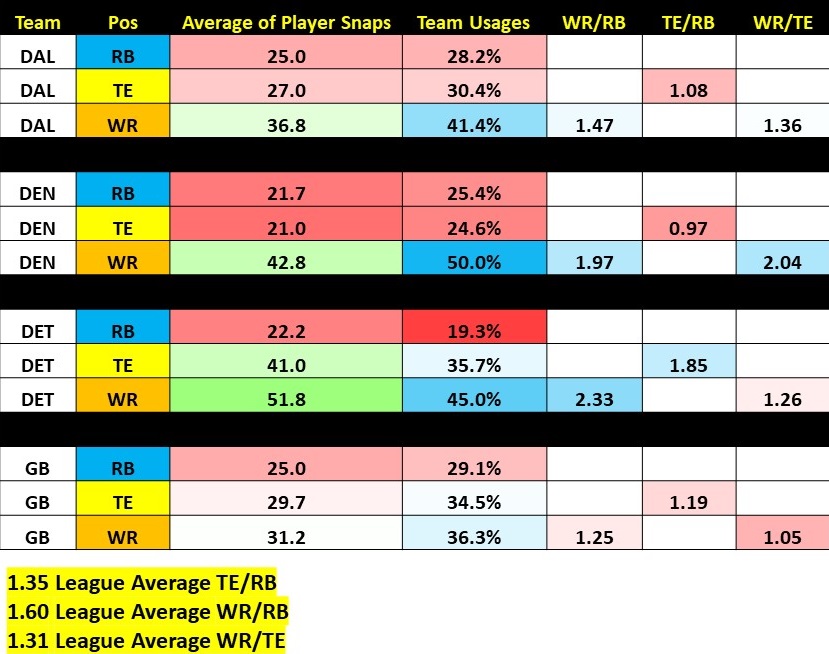 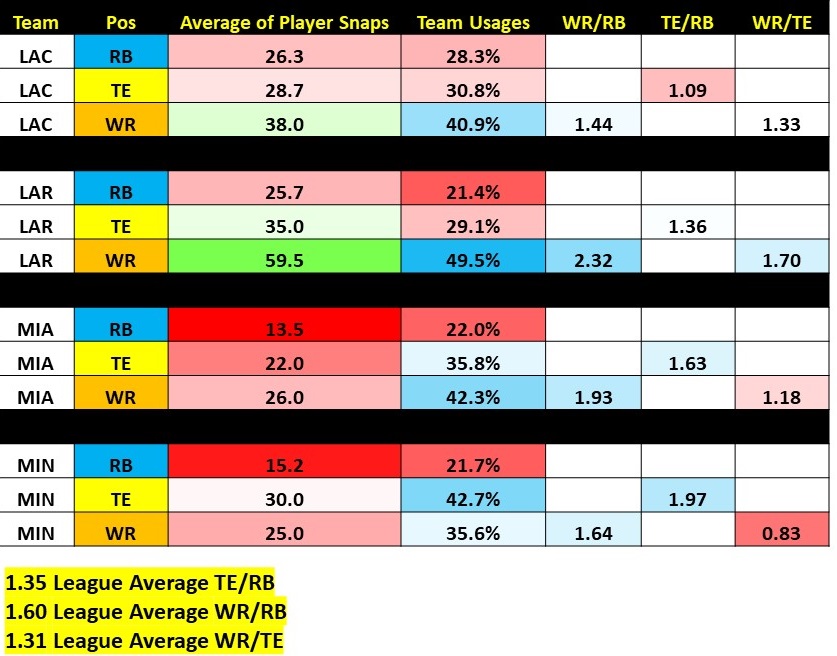 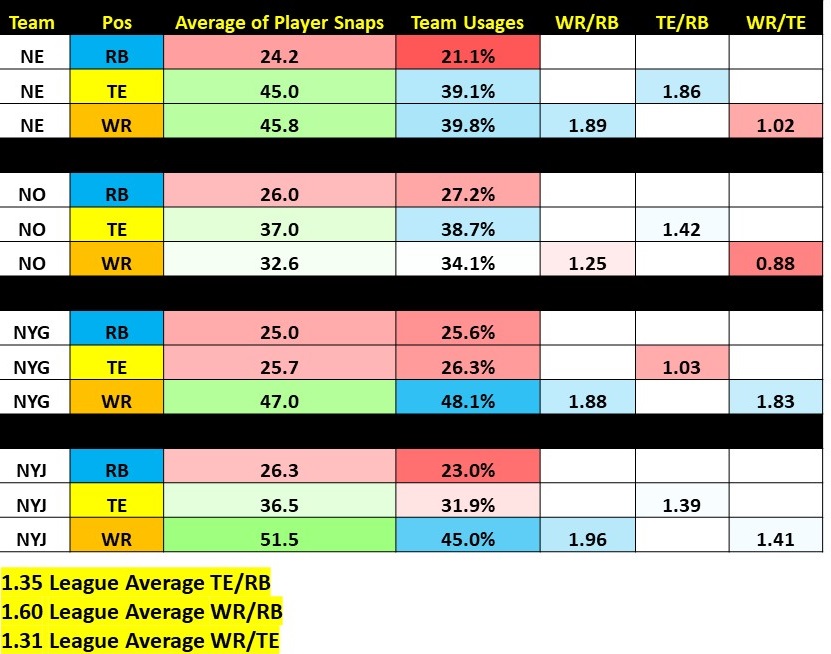 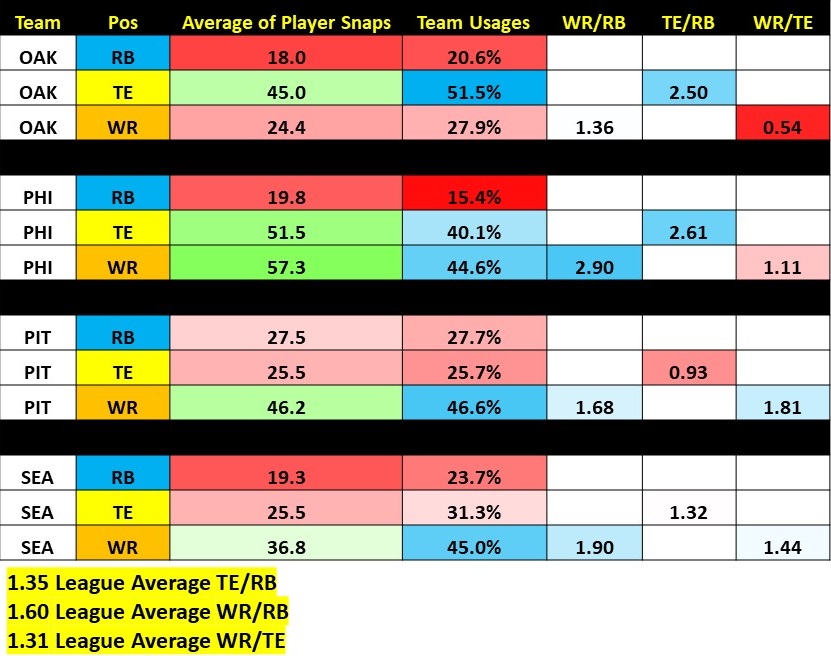 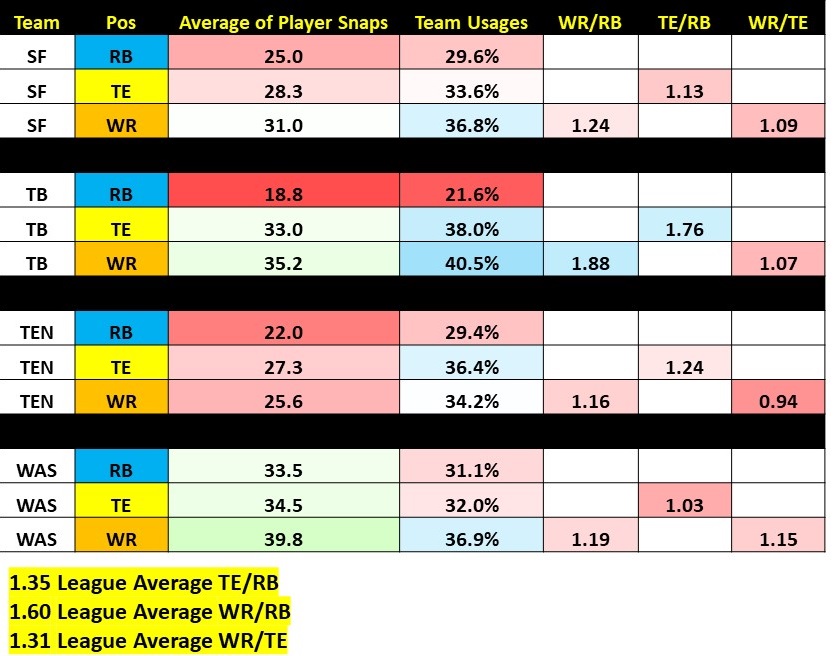 The next series of tables include:

I look for tiers within Snaps and Usages. Some players are highly used in-game with lower snaps. We are looking for opportunities and trying to determine the Team’s game scripts. 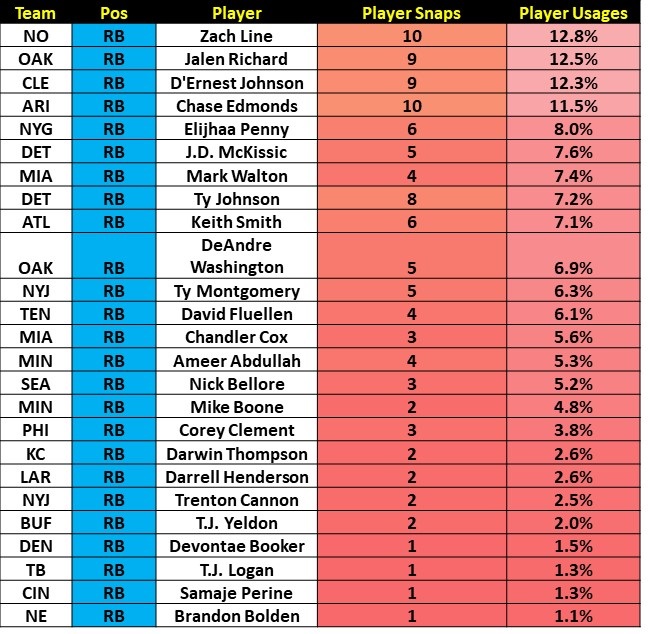 The following teams used their TE highly: NE/PIT/NYJ/MIN. The issue is blocking TE vs pass-catching TEs!  The preseason hype on Vance McDonald at 96% and Njoku at 84%, was confirmed. 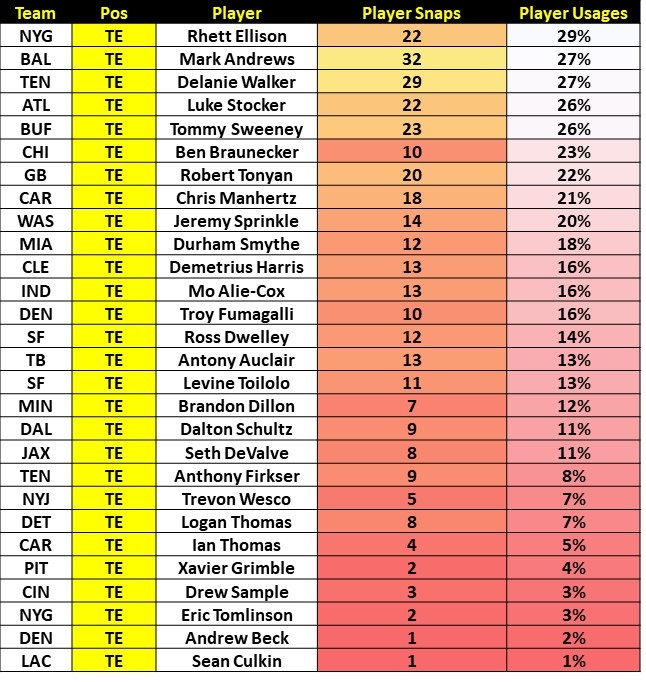 The following Teams needed their WRs: MIN/OAK/DET (Had the top 3 players in usages for week 1) 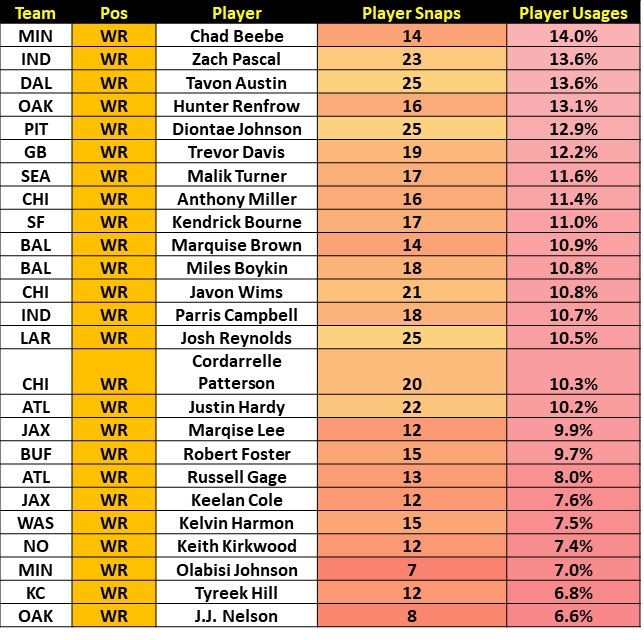 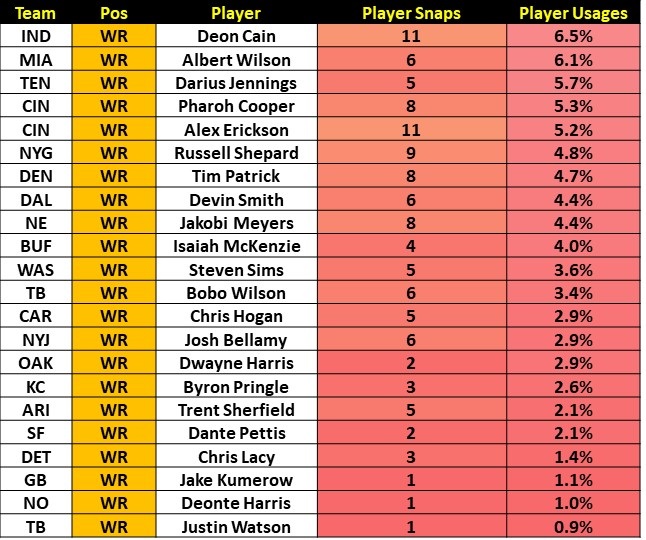 These Team specific Snaps and Snap based Team positional usages are colorized from high to low. Team landscapes can define pecking order and handcuffs.

I use to note handcuffs. Add key used handcuffs in possible

Look at pecking order. Does the Team have a clearly WR1? or is it WR 1A 1B and or 1C? This can be interesting for DFS stacking plays as well. 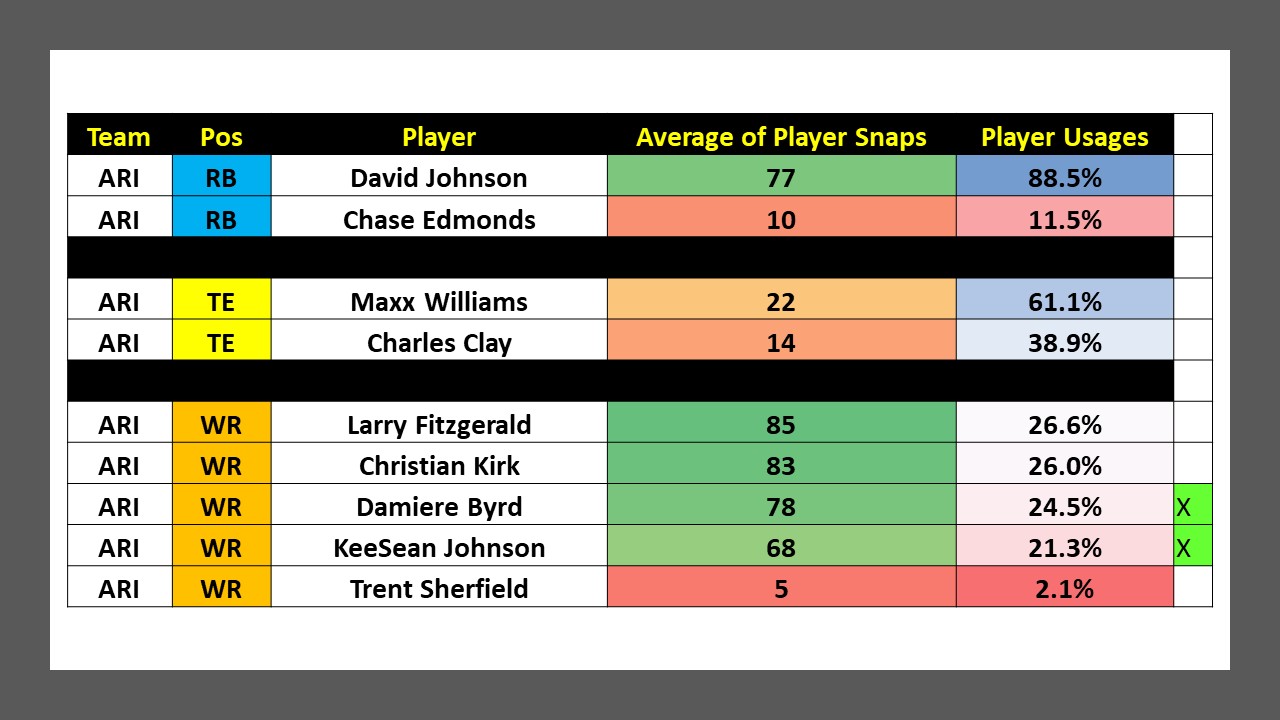 The RBs are RBBC. 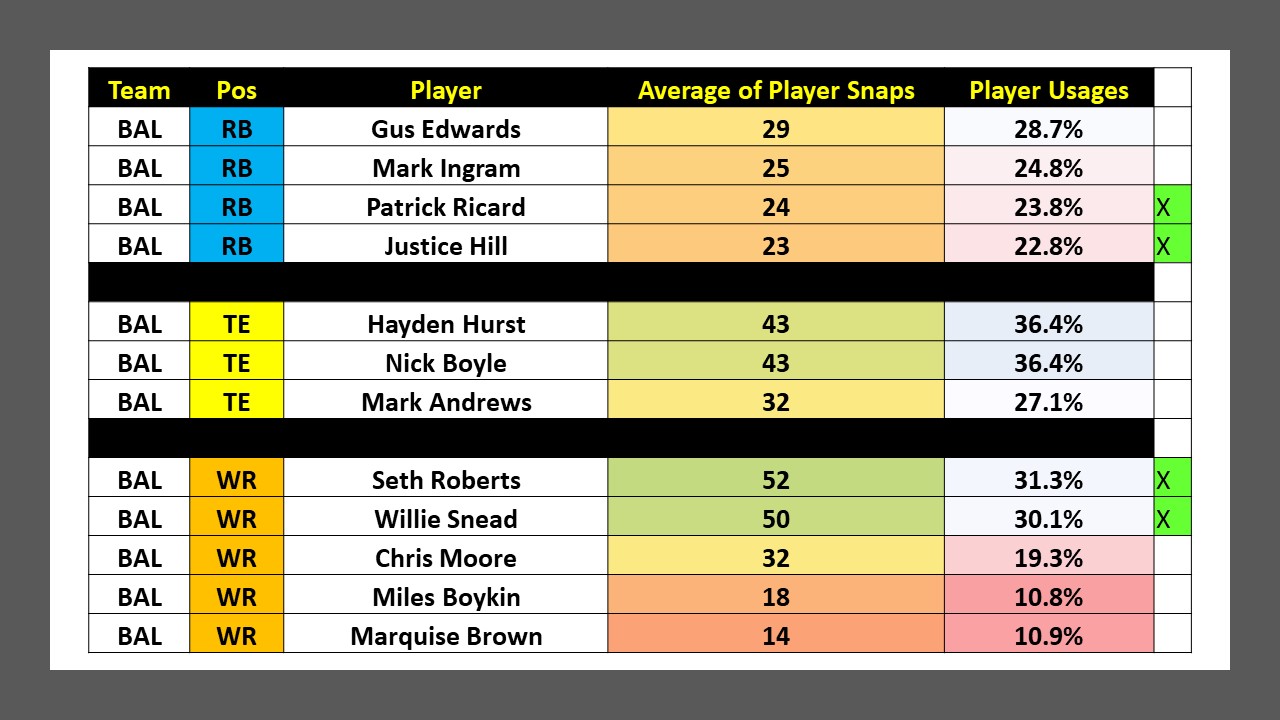 BAL RB is a 4-way scramble?

TEs are a TEBC crew

WRs are clear Roberts WR 1A and Snead 1B 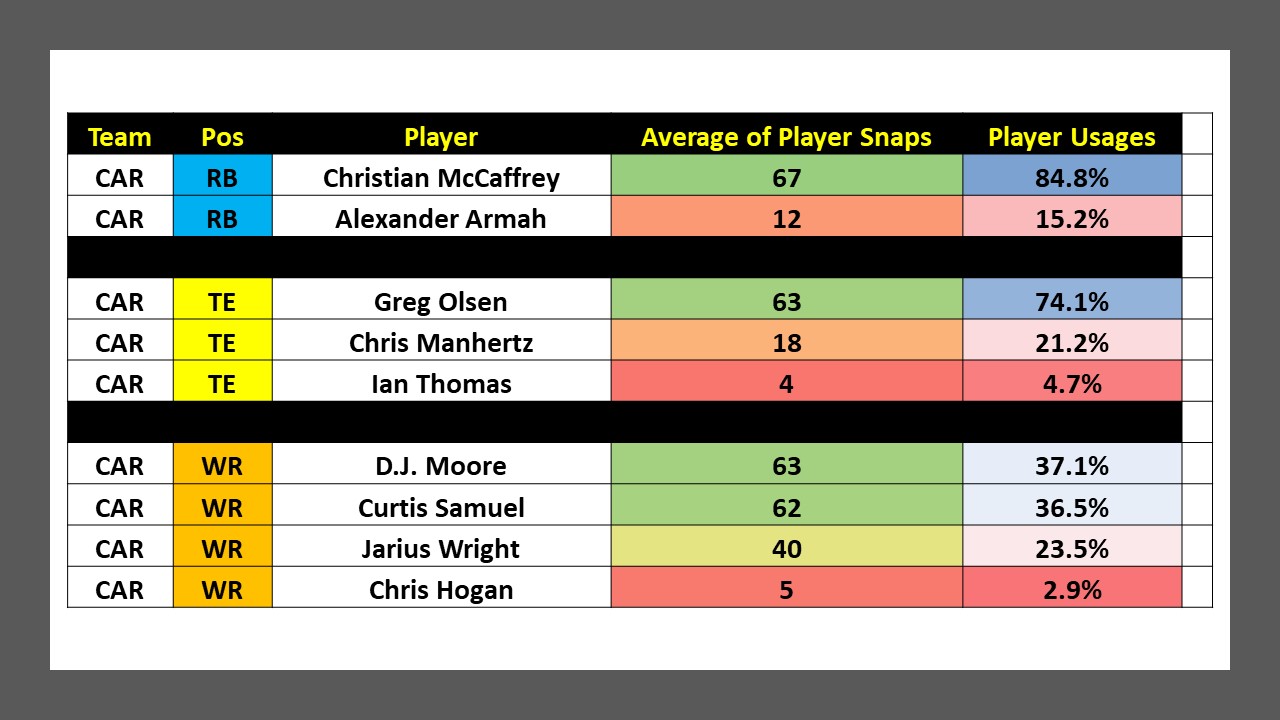 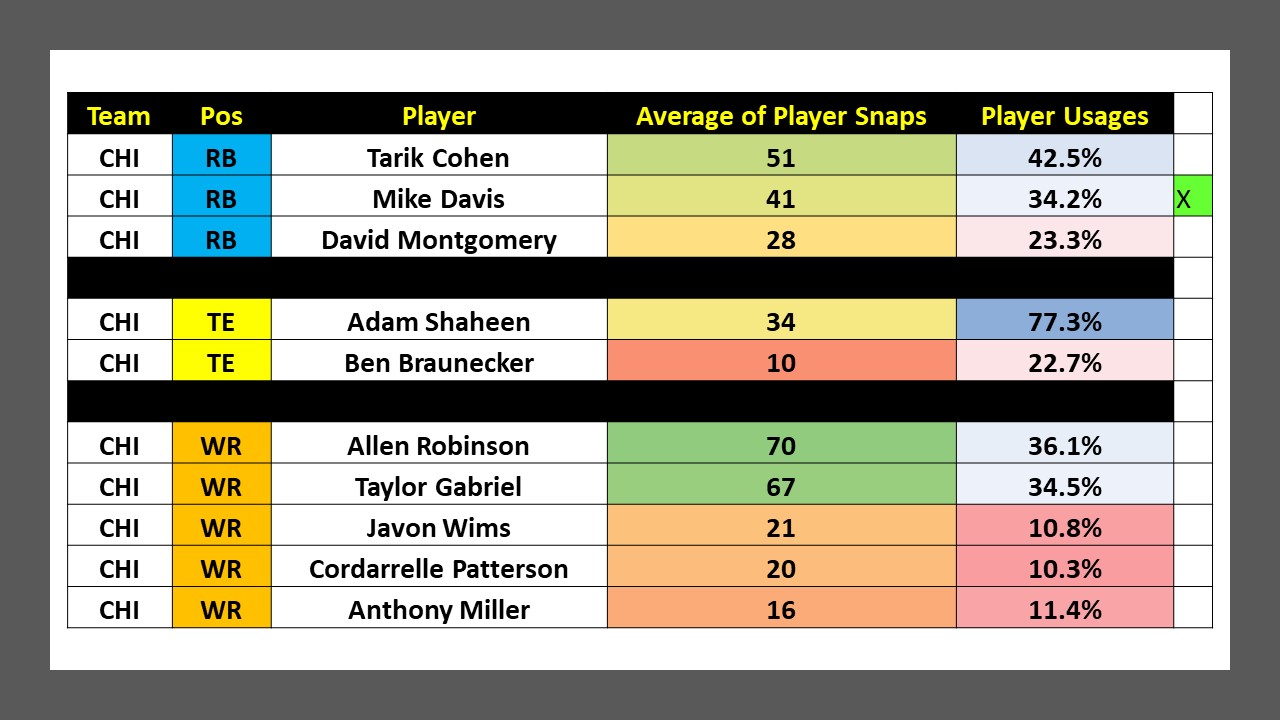 CHI RBs seem a committee but Cohen was dominating at 42% 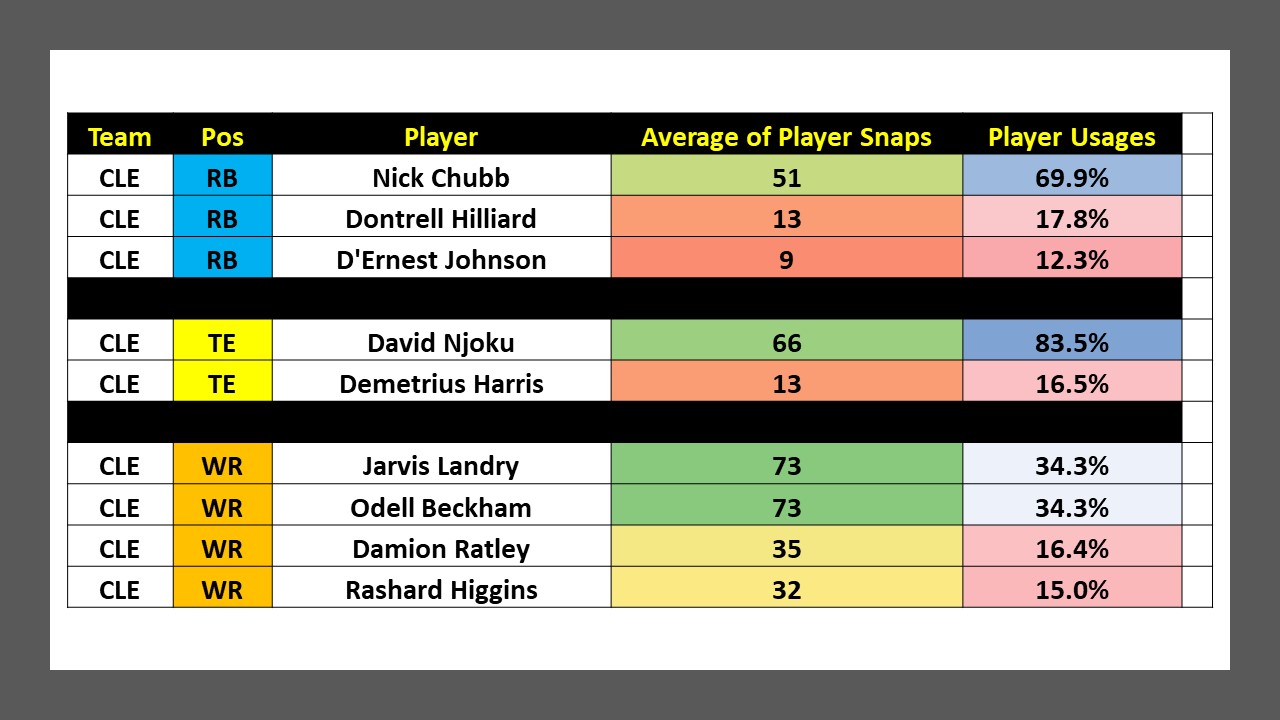 Cobb could be a sneaky WR 4 for your team. 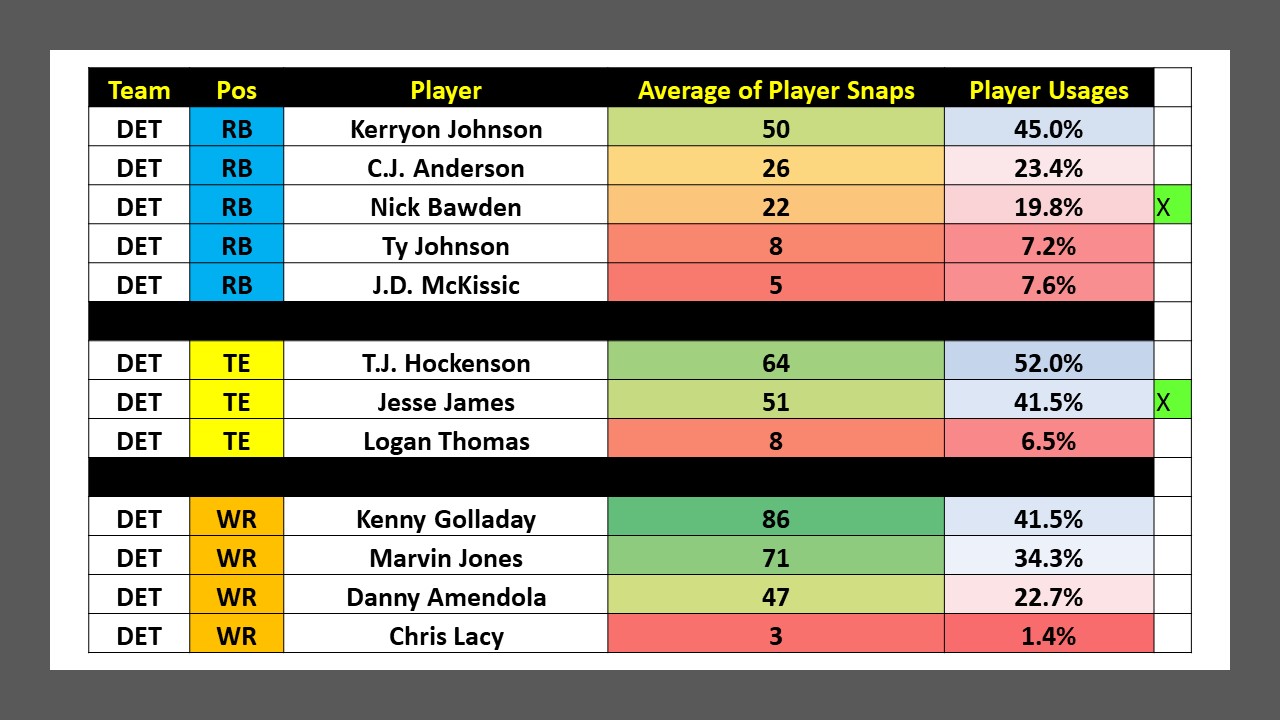 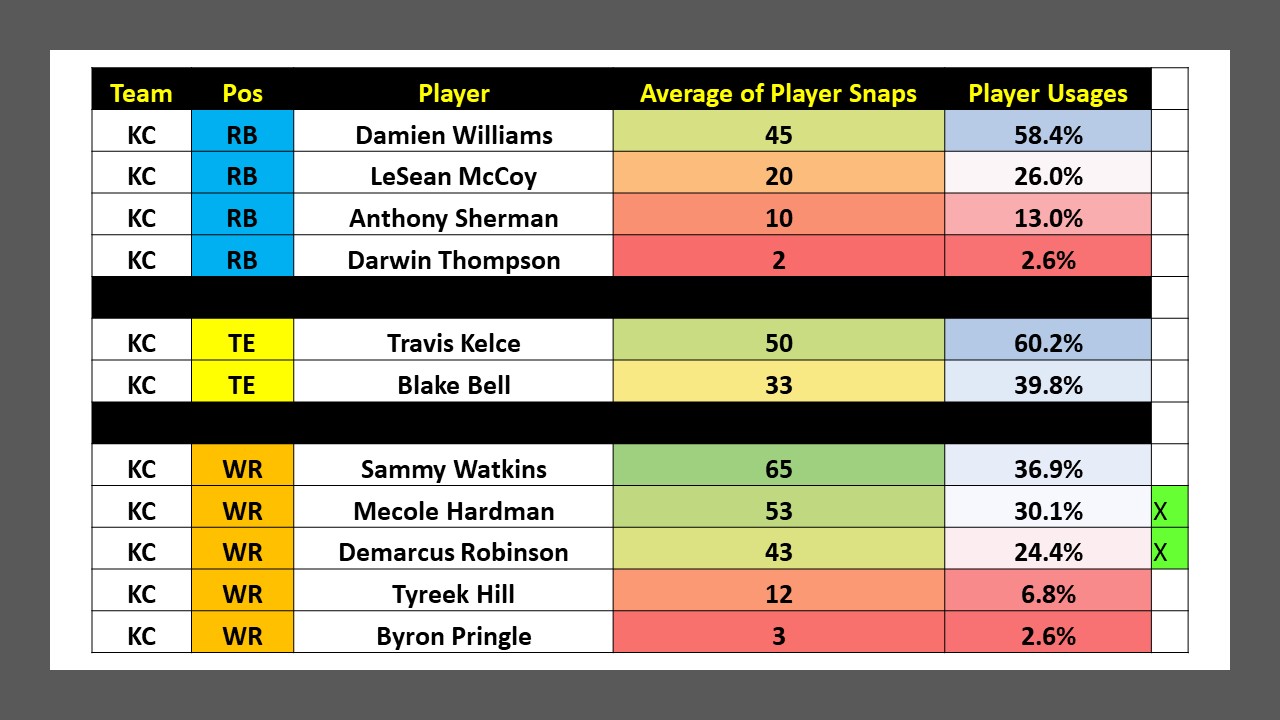 WRs solid  WR 1 is Watkins followed by Harman and Robinson (These 2 KC WRs could be solid pickups.

TE – Hunter Henry injured leads to Green or Culkin? Does LAC bring in a new TE?

WR 1A and 1B  Allen vs Williams 35% vs 27%. Note Williams injury opens up Benjamin and or Inman. Watch list players. 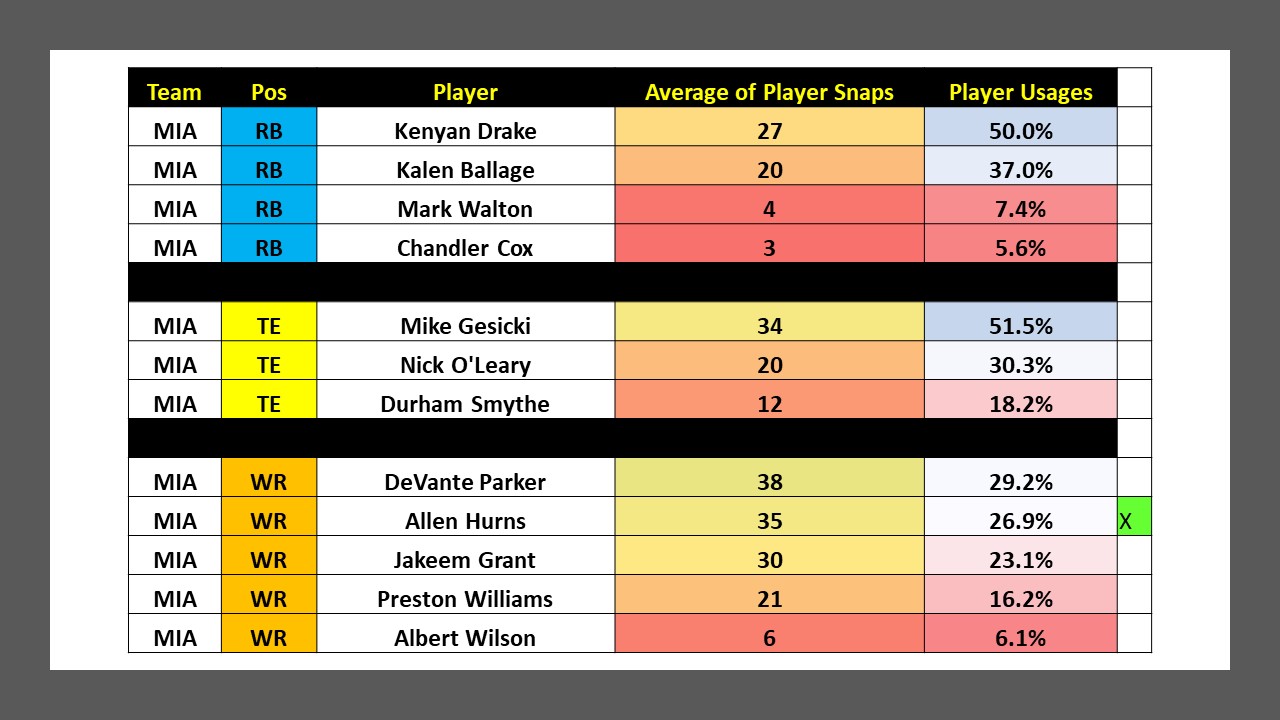 Surprised at Hurns in here.

I think this gap would be closer over the season.

RBs 1A, 1B, and 1C- typical NE RBBC show. Note that Develin was a surprise and Michel was 4th in RB usage was also not predicted.

Brown joins the fray. Dorsett usages drop? Or do we see a three-way committee?

Solid RB 1 in Kamara at 64% usages with Murray at 23%. Surprised at this split and I believe this usage gap closes as the season rolls on. 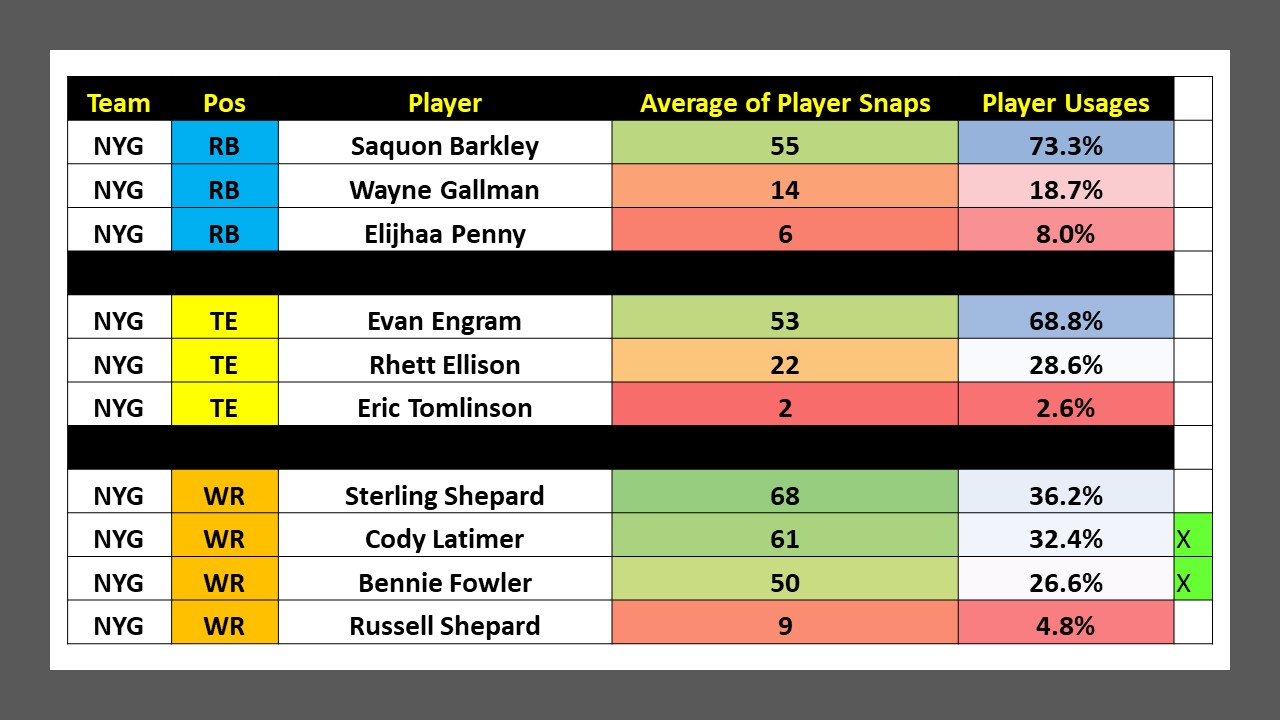 Clear RB 1 but with Bell maybe injured? Monty figures to be used along with Cannon?

Enunwa is out so does it go the WR 1A and 1B of does Bellamy move up?

Note WR Grant surprisingly was at 34% while a lot of buzz on Renfrow at 13.1% Watch List players.

WRs by committee. WR 1A, 1B, and 1C of Jeffery, Aghlor, and Jackson at 35% to 30%. Surprised that Agholor was used as high. An interesting player to watch!

RBs 1 and 2, We see Conner vs Samuels of 58 vs 42% usages. Samuels seems a solid handcuff with stand-alone value? 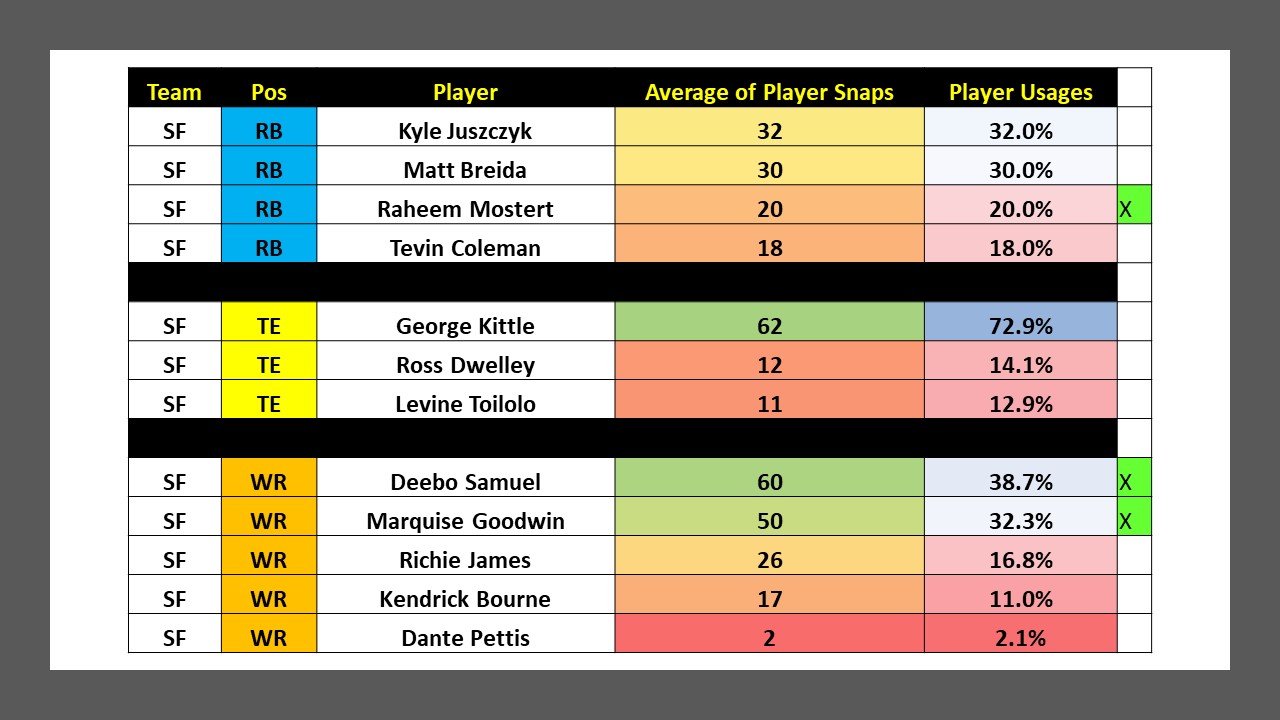 RBs – Committee with Brieda, Juszcyzk, and Mostert. Coleman’s injury leads to high Mostert usages? I purchased him in FAAB leagues for cheap! 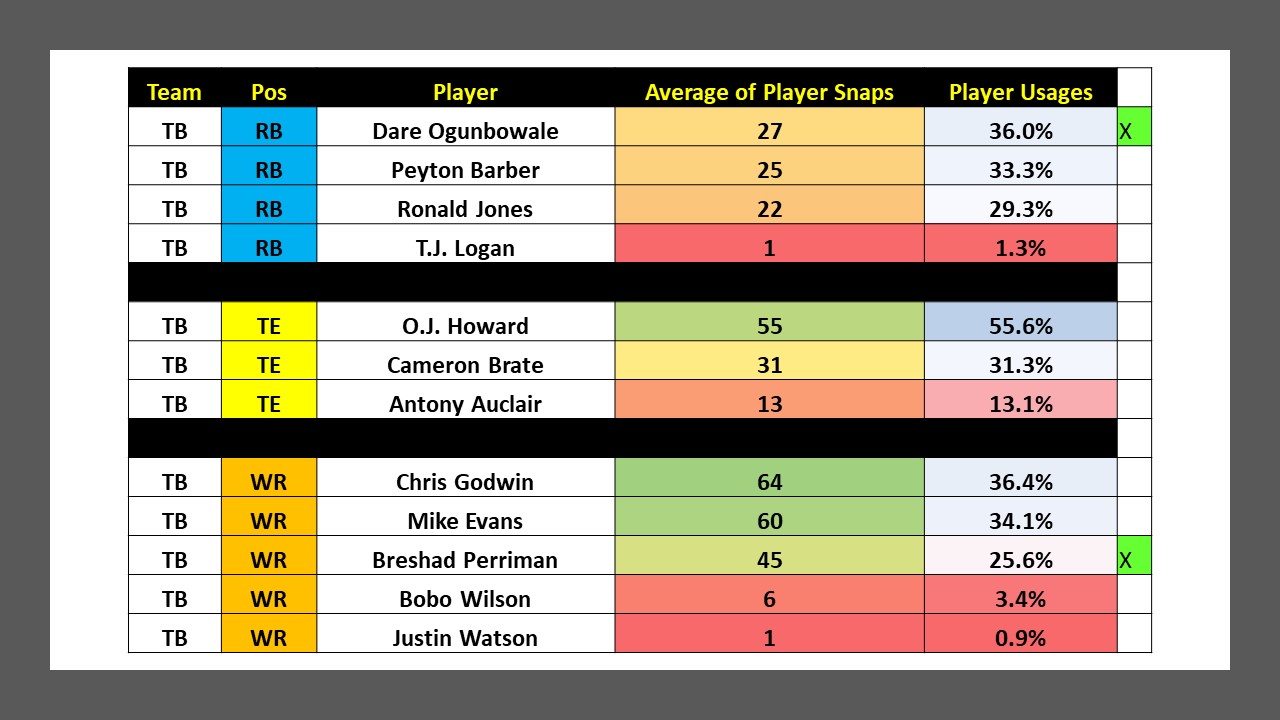 RB Committee. Dare O was the top used TB RB (surprise). I purchase him in FAAB leagues for cheap. Barber at 33% and Jones at 29%. I would not invest too much in this 3-way crew.

Clear TE with Howard at 56%. He was the right play week 1 but bad result! Do not discard!

Interesting TE Committee of Smith, Pruitt, and Walker at  34%, 31%, and 27%. Surprised at the usages of Walker. Caution.

WR- WR 1 is Davis at 35% followed by WR2A, 2B, and 2C of Sharpe, Brown, and Humphries all at 23 to 17% usages. Surprised that Humphries was so lowly used. Caution. AJ Brown may be the better play in here.

RBs – Guice is out so Peterson and Thompson ar ethe show. However, the snap usages are not known. Thompson has stand-alone value.

TE – Davis stepped up due to Reed injury. Reed should be back soon. Davis is the must-have Reed handcuff.

WRs committee of Quinn, McLaurin, and Richardson art 33%, 31%, and 26%. Buzz on the Rookie McLaurin and I purchased him in FAAB.

See my Week 2 Rankings at link below.