What a week the NFL has had. They completely messed up the handling of the Ray Rice situation and their final punishment was strictly fueled by public opinion. The NFL now apparently has stricter domestic violence violations, yet San Francisco’s Ray McDonald and Carolina’s Greg Hardy continue to suit up. The breaking news about Adrian Peterson abusing his child is scary to think about as well. I applaud the Vikings for doing the right thing and deactivating him this week. Then you have a new drug policy that was recently voted on and passed that will reduce the suspensions of fantasy players such as Wes Welker and Josh Gordon. The NFL is a complete mess right now and Roger Goodell is one guy I would hate to be at this time. The season must go on however. So let’s get to week 2’s sneaky starts. My start percentages are based off the Yahoo Fantasy Football game and were accounted for on Wednesday evening.

If you haven’t heard, regular starter Ben Tate has been ruled out this week. The backfield is now West’s to own and he is a good bet this week to receive 20 touches. The Browns offensive line looked borderline dominant in the 2nd half against the Steelers when West scampered for 100 yards rushing. His vision and jump cuts are excellent and his time at Towson University (my alma mater) proved that he can handle a full workload. The Browns are hosting an angry Saints team this week, but I expect Cleveland will want to keep Drew Brees off of the field as much as possible. West is a top 20 running back play in my opinion and excellent flex option. 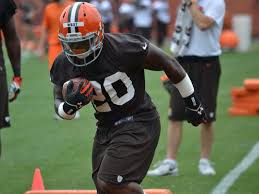 Ivory ran very hard in week 1 while splitting snaps with teammate Chris Johnson. He made his damage against Oakland on his 70 yard touchdown scamper where he showed surprising breakaway speed. The Jets running backs now get to face a soft Packers front 7 who just gave up 207 rushing yards to Seattle. Rex Ryan knows he can’t survive a shootout, so expect the ground and pound offense to be in full force. Ivory is a move the chains type back who has the ability to thrive in these types of games. He won’t catch many passes, but I like his chances of finding pay dirt for a second straight week.

Sanu remains the Bengals No. 2 WR while Marvin Jones continues to recover from his foot injury. Sanu had a decent showing against a tough Baltimore defense in week 1 with 4 receptions and gets an easier matchup this week against Atlanta. The Falcons last week were torched by wide outs Marques Colston and Brandin Cooks. After watching A.J. Green win the game for Cincy last week, I fully expect the Falcons to send extra help towards him all game. Sanu should see beneficial coverages. The unfortunate injury to Tyler Eifert bumps Sanu up to the number three option in the passing game behind Green and Bernard. The Bengals will have to score points to win this game and Sanu could be a big part of that.

Brown showed the little bit of “wiggle” that he has in week 1 when he took a wide receiver screen for a touchdown versus San Diego. He looked great in the preseason and looks to be locked into that T.Y. Hilton role in Bruce Arians offense. The fact that Brown was in for 58% of the Cardinals snaps Monday night bodes well for the rest of the season. The Cardinals Tight End’s are nonexistent and Arians loves 3 WR sets. Brown had a healthy 5 targets last week and I could see an increase versus a weak Giants secondary that just got torched by Detroit. I’m looking for John to get loose in the Meadowlands this Sunday. I struck out last week with Jace Amaro, so why not go to the tight end well again? Starting tight end Jordan Reed has all but been ruled out for week 2, leaving Paul as the beneficiary. Paul was surprisingly effective against Houston posting 4 receptions and 86 yards. He nearly scored a touchdown as well. He is not the most talented individual, but the opportunity is there for a touchdown versus the Jaguars who got eaten up by Zach Ertz. If Ertz can post huge stats in a timeshare with Brent Celek versus Jacksonville, then why can’t Paul with all the snaps to himself?

Think I’m crazy? Let me know on Twitter and don’t be afraid to leave a few of your “sneaky starts” to match your wits with mine! Good luck to all fantasy owners in week 1, may we all start out undefeated!