Carson Palmer is on form at the moment after topping 400 passing yards last week, and is worth starting as a QB12-16 this week in my opinion. I’ve always thought Palmer had talent, and as the Cardinals are building up momentum for a playoff run they will need him to continue his smart QB play. The Colts defence against QBs is so-so, and Ryan Fitzpatrick scored 15 points last week on Thursday Night Football.

Hello Michael Floyd. The sophomore WR had a career day last week with 6 catches for 193 yards and a TD. Floyd has been quietly building up steam in the last few weeks and his good play has coincided with Palmer’s revitalisation. I like him as a low WR2 this week. Larry Fitzgerald has top 10 WR upside but I’d play him as a middling WR2 this week.

Floyd’s coming out party could be a sign of things to come in fantasy – photo from readandreact.net

Rob Housler got 70 yards against the Jags, and appears to be finally finding a place in the Cardinals offence. I still can’t recommend starting him right now, but he’s worth a spot on your roster as the upside is inevitably there.

Cardinals D/ST are flying this year, I like them to score top 10 D/ST points this week.

Colin Kaepernick would be droppable in all but the deepest leagues if it wasn’t for his rushing potential and his matchup this week. If CK doesn’t turn it on against a Redskins Defence that are incapable of stopping the run or the pass then I would seriously consider dropping him. Because of his disappointing season thus far I’m going to say he’s a QB10 this week with QB1 upside, it’s your risk to make.

Frank Gore’s lack of production correlates exactly with a lack of touches. If the 49ers want to win football games Gore has to be the focal point of the offence. In the last two weeks Gore has rushed just 28 times for a total of 130 yards and no touchdowns. I expect an increased workload this week against the second worst Defence in the NFL against the run. Start Gore as a RB3-6 this week, he should see 15 points plus as long as he gets the carries.

Anquan Boldin caught a TD and brought his fantasy score over 10 pts for the first time since week 4 and only the third time this season. Boldin has been a bust for sure, but this week he has the chance to see back to back 10+ games for the first time as a 49er. I think he scores 10-14 points this week and more in PPR. Crabtree is doing individual workouts with Mario Manningham but won’t start this week. Manningham is one to watch but his value is limited to WR3/Flex in deeper leagues.

Crabtree is still not ready to suit up for the 49ers – photo from www.sportingnews.com

Vernon Davis should be started as a top 5 TE every week as he is one of the most talented TEs and is the focus of the 49ers passing attack. If the 49ers can exploit the Redskins poor secondary then Davis should have a great day in fantasy.

Kellen Clemens is a matchup-based starter, and this week I don’t like the matchup. He’s startable in the deepest of leagues but definitely outside the top 16 QBs this week.

Zac Stacy has got it going on. This week against the Bears he should rack up another 100 yard rushing game and a TD. I love Stacy in dynasty and in redraft he’s going to be one of the best draft steals of the year.

Tavon Austin finally had the kind of performance we knew he could have, however this must be taken exactly how it was, one was a kick return TD – something we can’t accurately predict. The other two came off huge reception TDs (he only caught two passes in the entire game). We know Austin can make plays when he gets into space, but this is more lightning striking twice (or three times) than anything. He will always have that upside, but you can’t rely on it on a weekly basis. Austin has 4 points or less in all games this season apart from two (in both of those games he has multiple TDs). No other Rams WRs are worth a start though I like Pettis and Givens more than the rest, just. 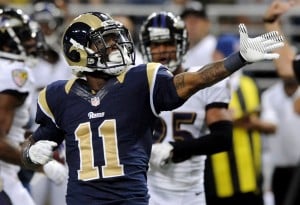 Austin’s TDs are the exception to the rule, don’t get overexcited – photo from www.stltoday.com

Jared Cook put in another dismal effort. Drop him in all but the deepest league.

Rams D/ST are so-so this week. There are better options on waivers if you’re in a 12 team or less league no doubt.