The beginning of Part 2 of Non-PPR Rankings Landscapes. In the last segment began our drill-down into Non-PPR redraft league information. Interstingly, I discussed bottom-up vs. top-down approaches for a deeper analysis.

I continue moving down with the next metrics of my FPR rankings. All ranked players were assigned an FPR score then each team’s crew of players’ FPRs were averaged. That metric is shown in the second column. The league team average of team FPR averages was calculated and substrated from the Average of FPR to yield the scaled FPR for each team.

The 32 NFL teams were sorted from the highest average (best players?) to lowest with colorization of green/blue (high) vs. low (red)

Additionally, the extremes were DAL, LAR, TEN, BUF, KC, CLE, and BAL, while the worst teams under 2020 predicted NON-PPR conditions were WAS, MIA, JAC, LV, CIN, NE, and CHI. Finally, you should move to the high team’s players, especially those that at deeper in the depth chart. Move away for deep players from the red teams. 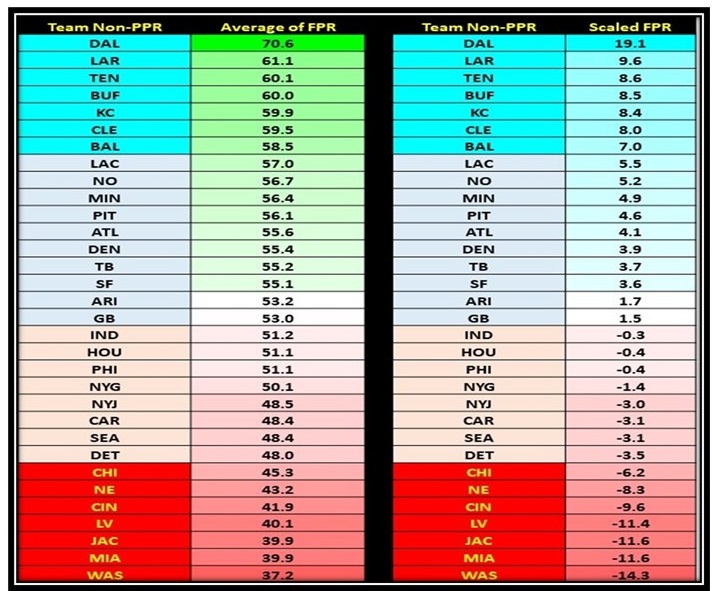 The graph gives us a visual landscape of NON-PPR team rankings. 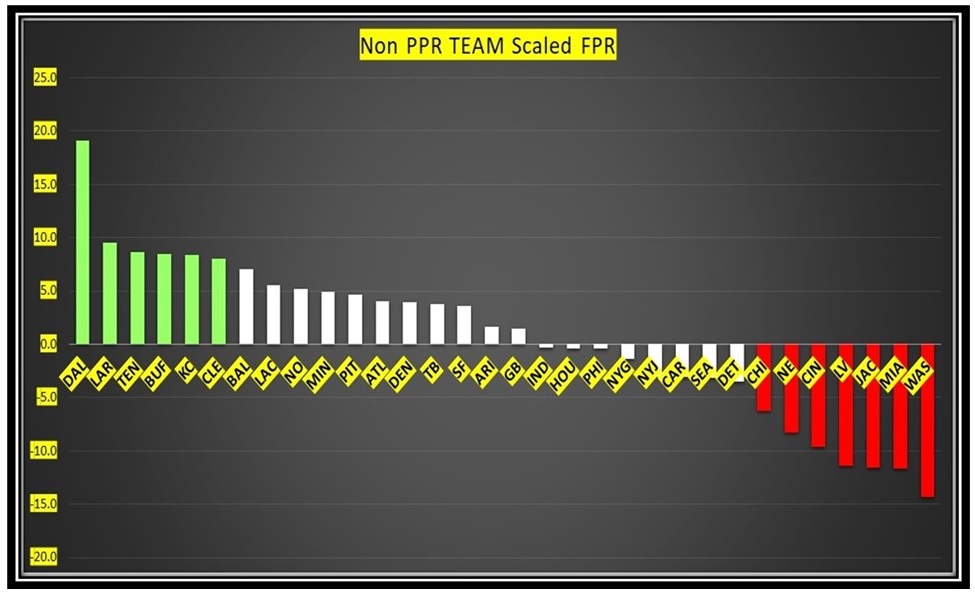 Non-PPR Rankings Landscapes. Heat-mapping of each team’s level of Non-PPR FPR averages. Extremes should be considered within your drafting plans. For example, ARI has a weak DST, while the QB is thought to be strong. Note no TEs ranked (Poor) while the RB/WR were nearly the same.

Go through each team and just say the numbers can focus your attention, especially if an auditory learner. Consider 50% as league average. 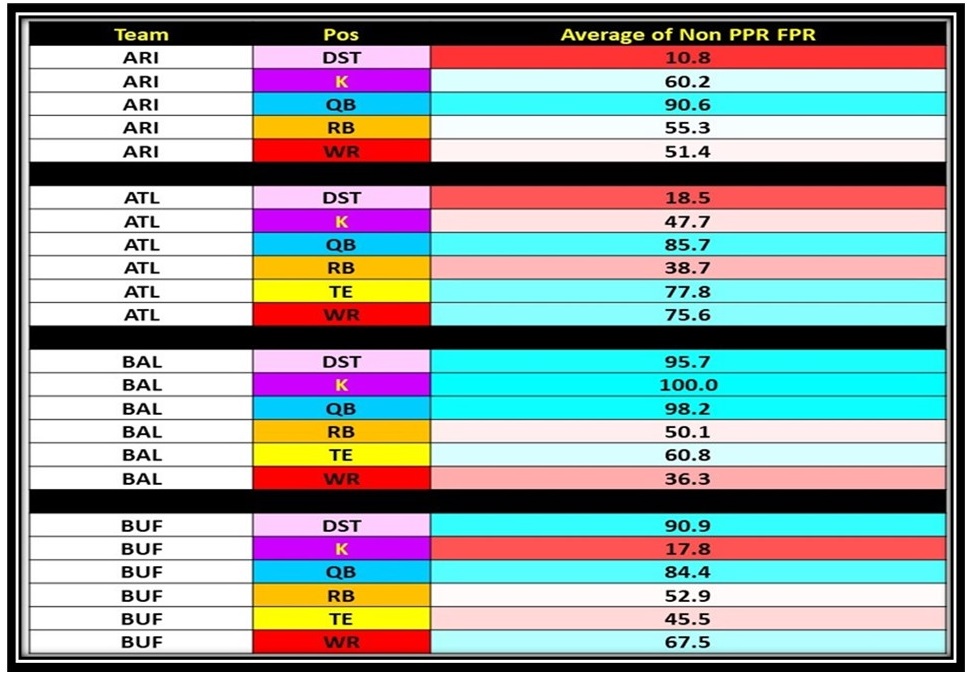 Non-PPR Rankings Landscapes. Firstly, try using visual soft focusing by using the 50% level (purple line) as a guide to see each team and what are their positions ranked. Use these notes to set draft guides.

Next, for example, BAL has great DST, Kicker, and QB with an above-average TE crew. The RBs are average (RRBC is the reason), but the WRs are seen as weak. Thus a strong QB but weak WRs implying a rushing QB who uses their TEs. Write those 2 or 3 sentences down to highlight the talking” metrics. Yes, I could write it all down for you, but you learn by doing. If you are lazy, then it will not matter. Work for your victories! 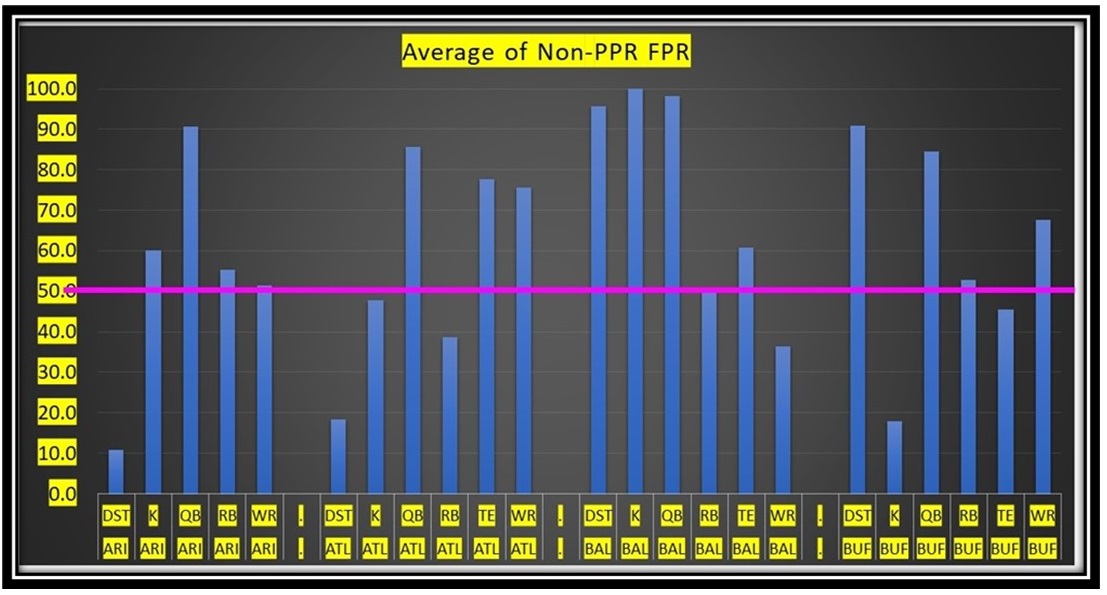 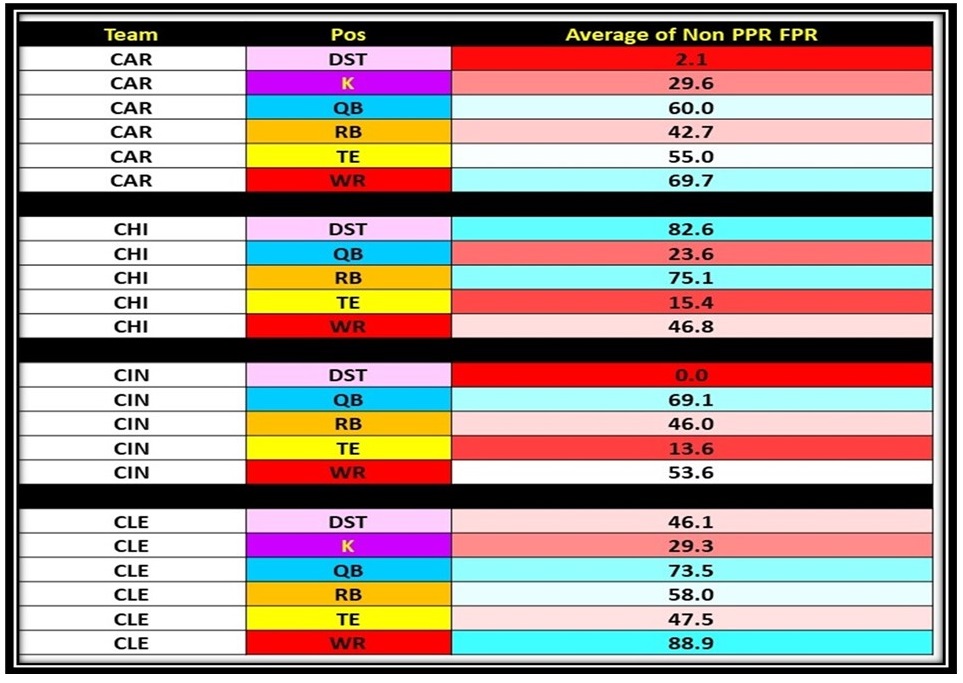 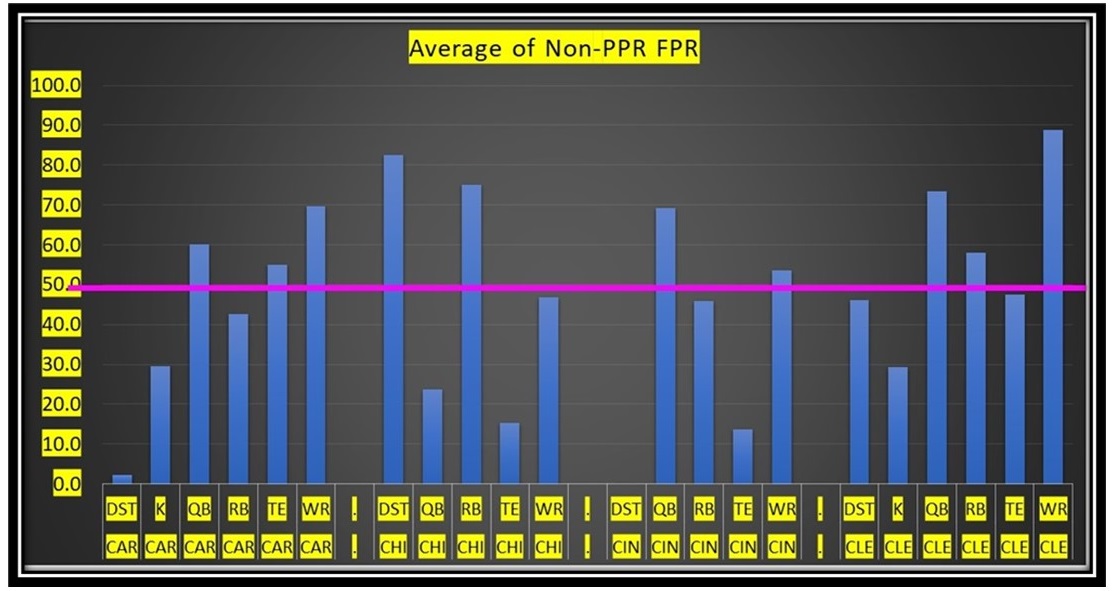 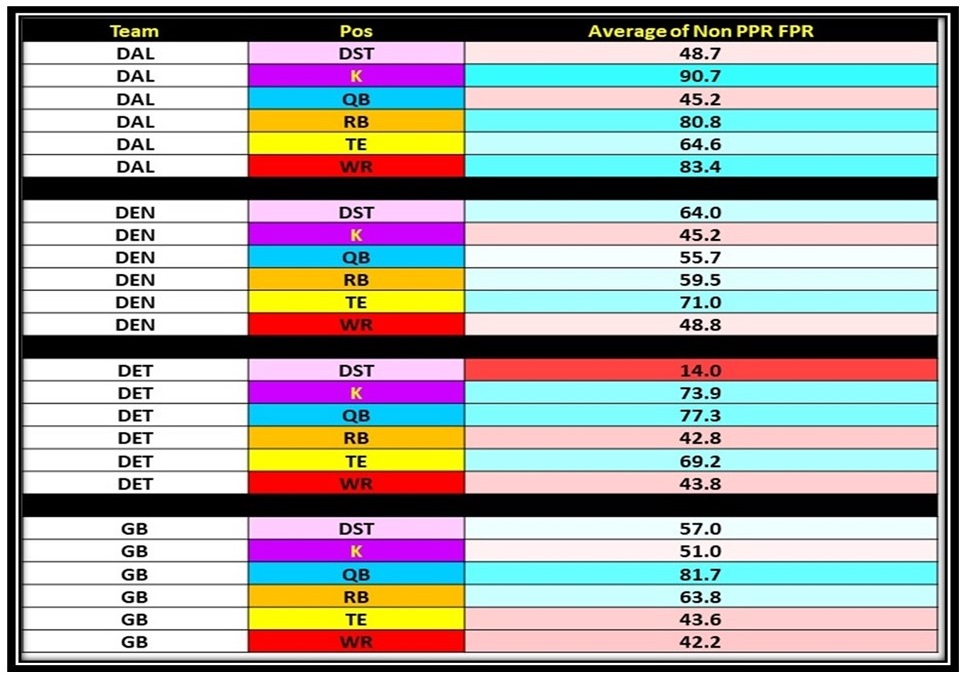 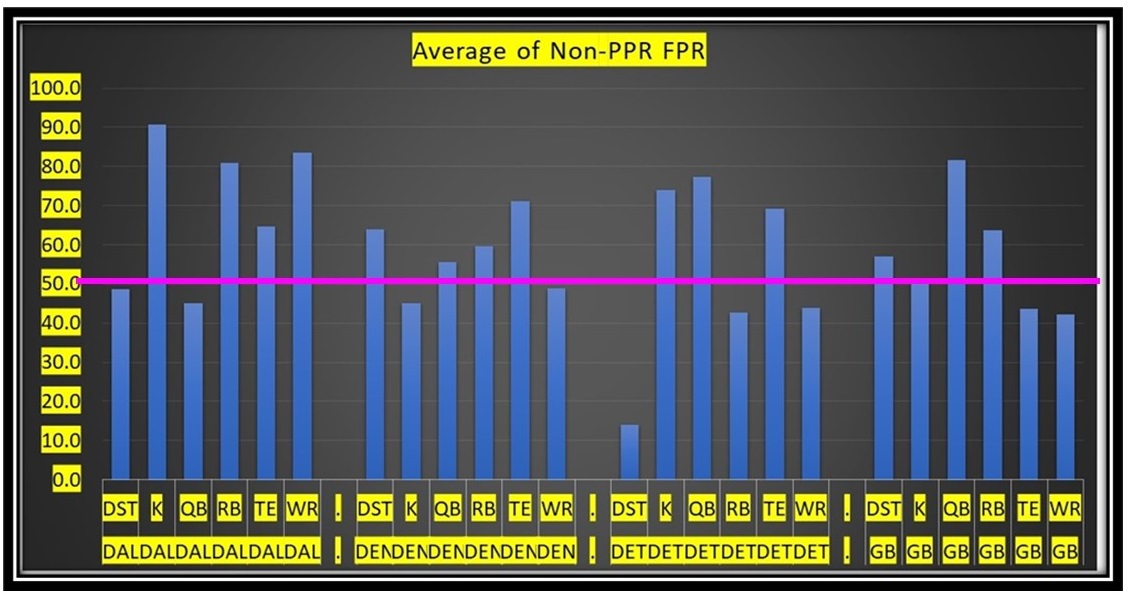 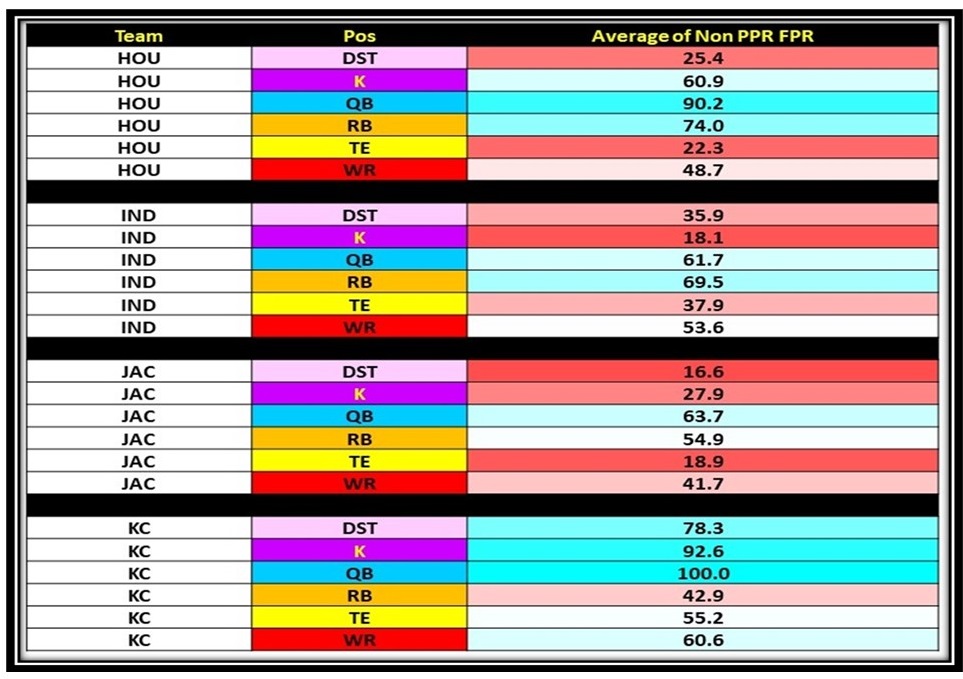 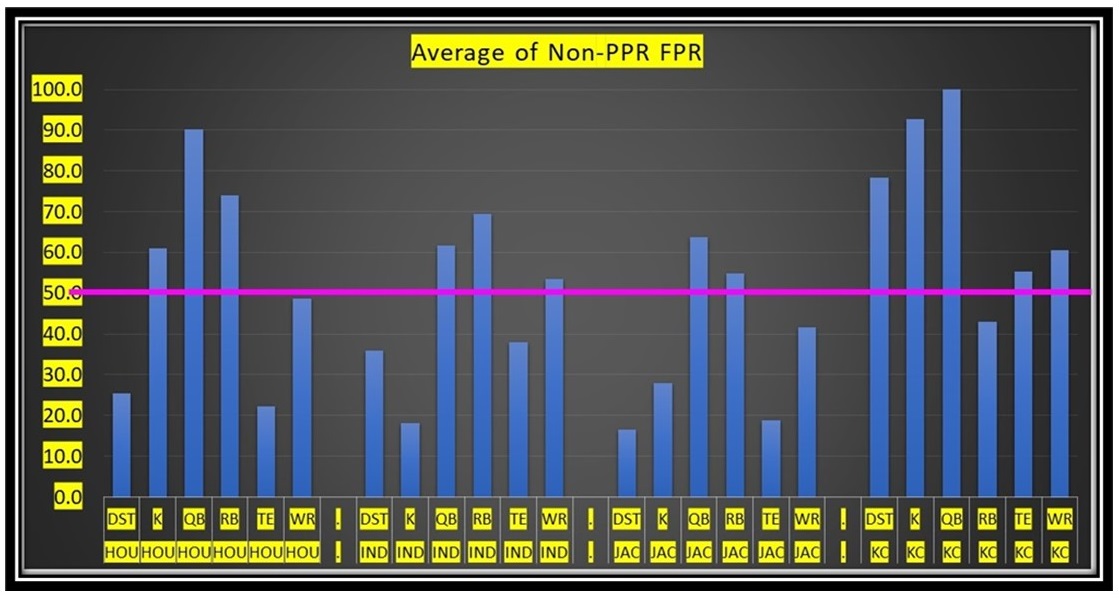 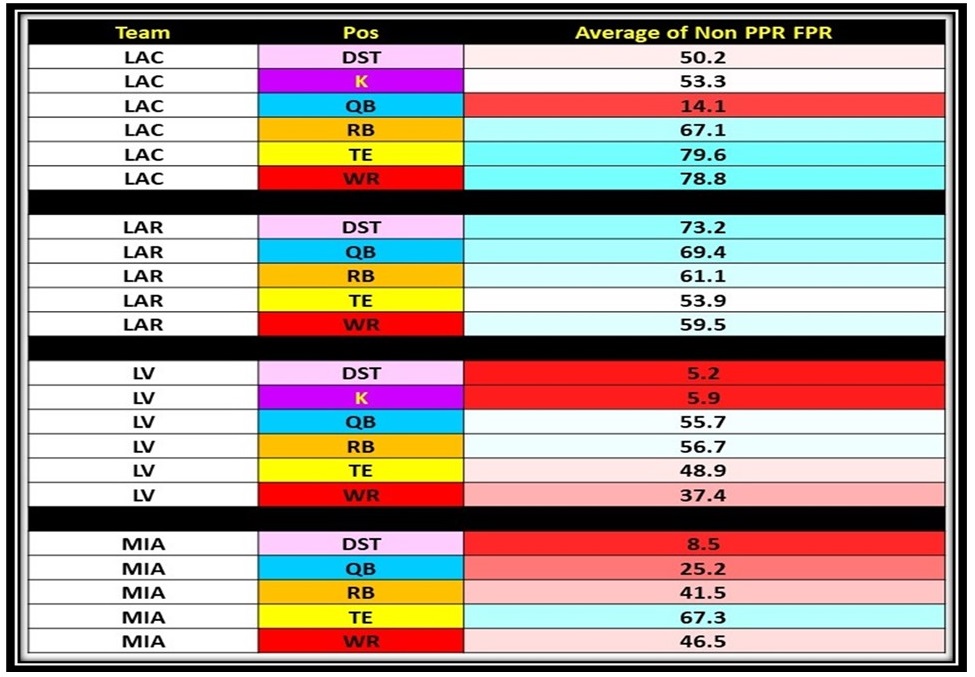 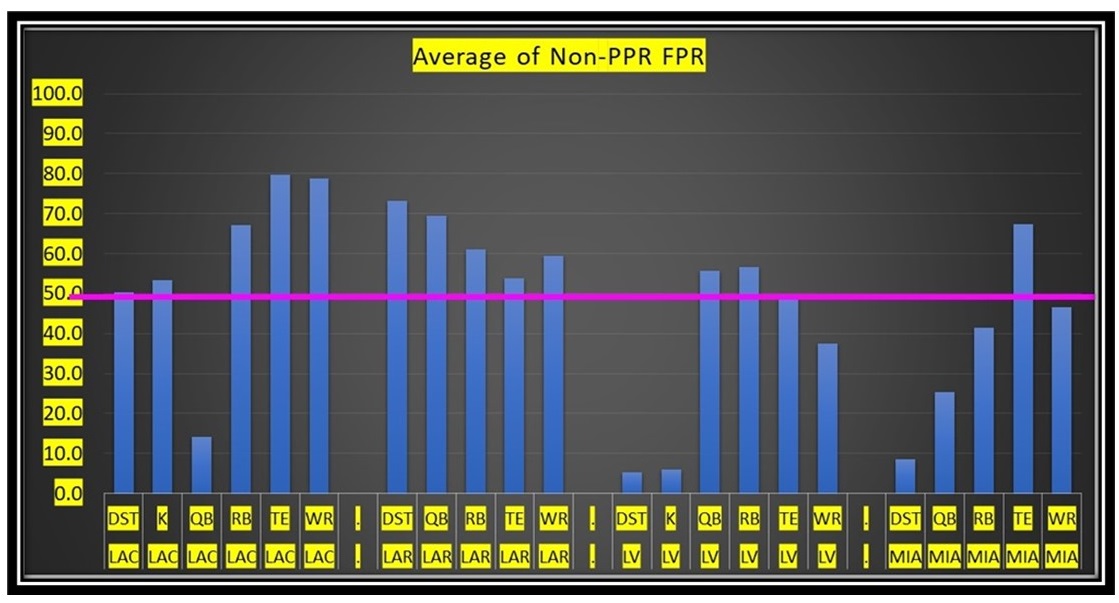 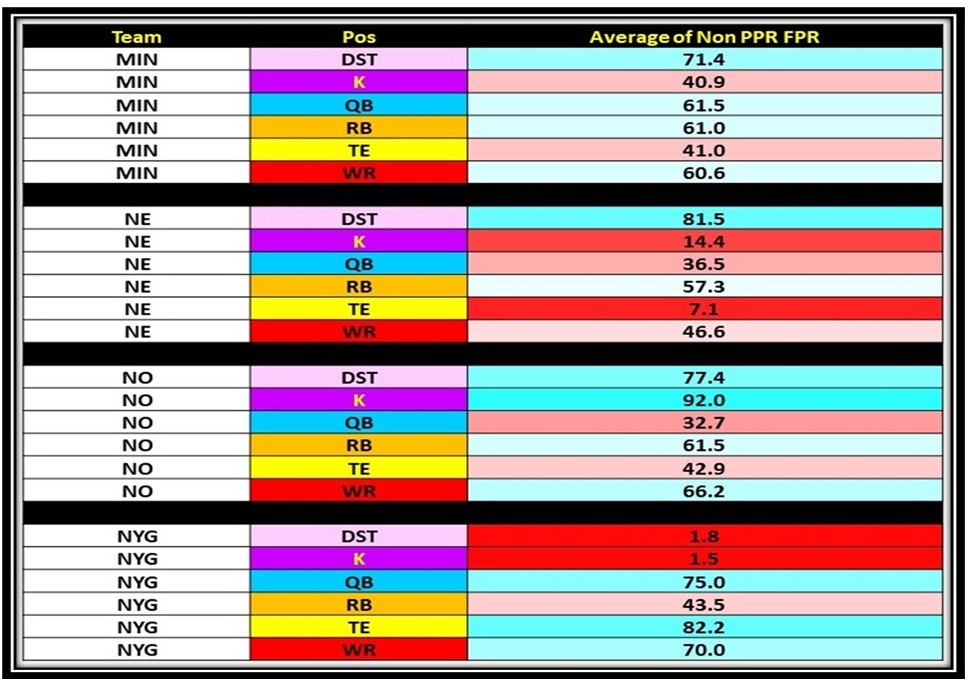 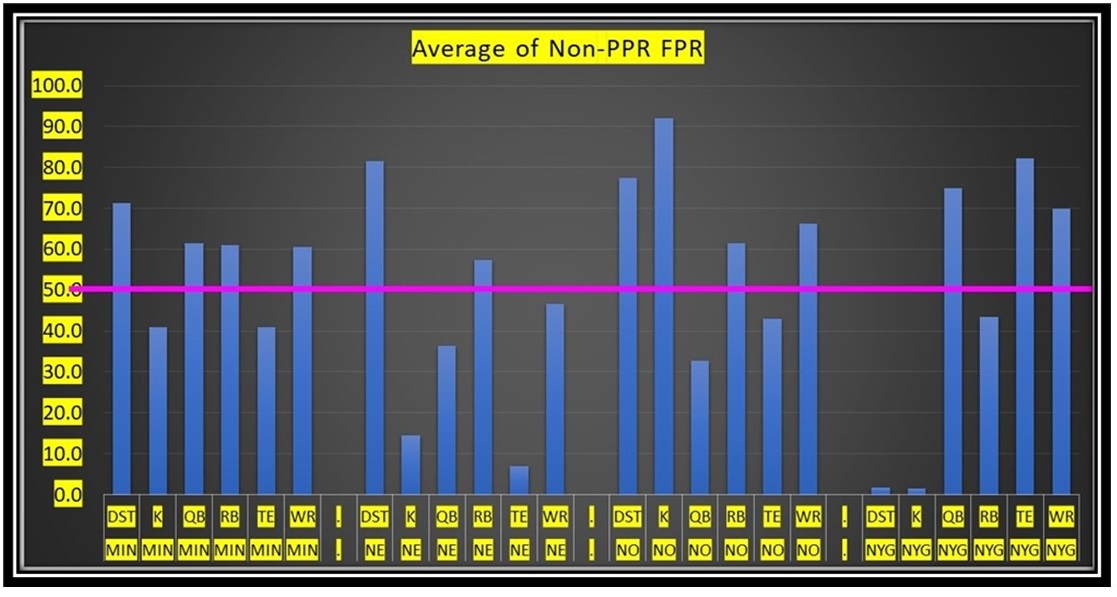 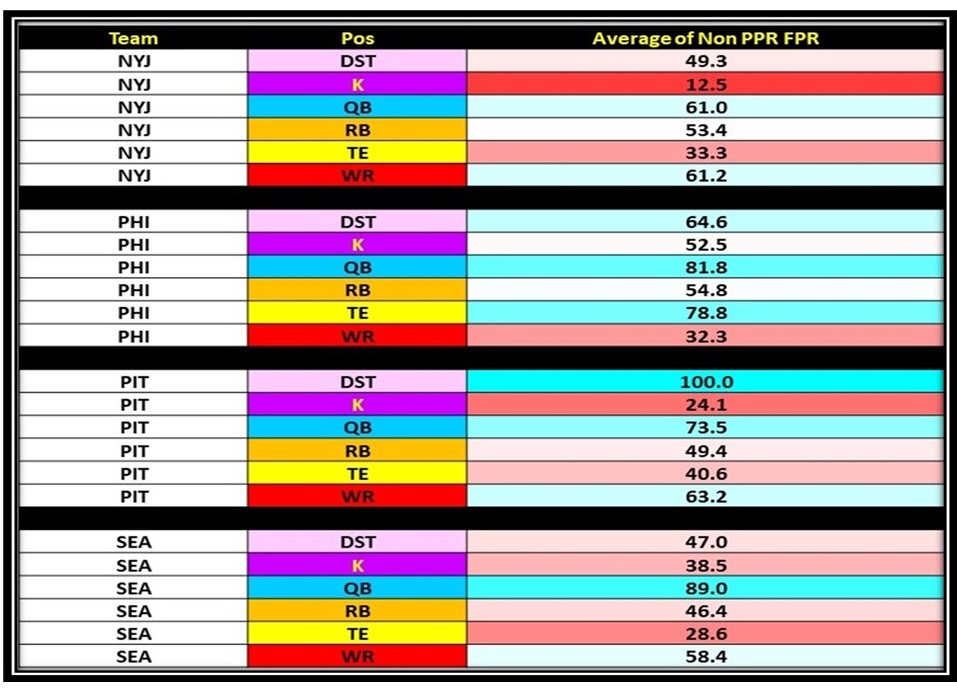 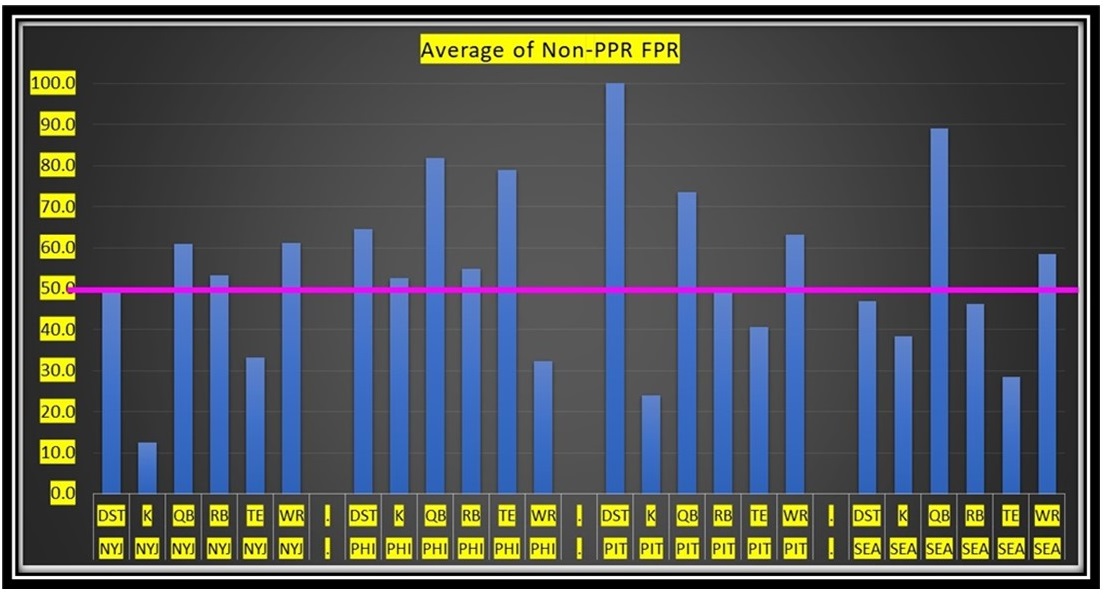 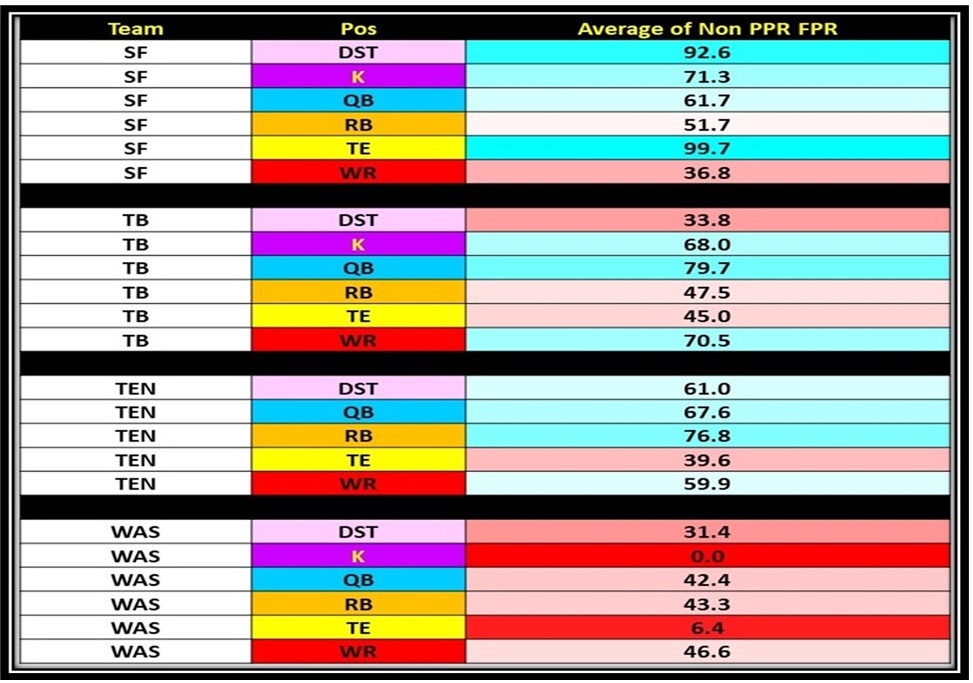 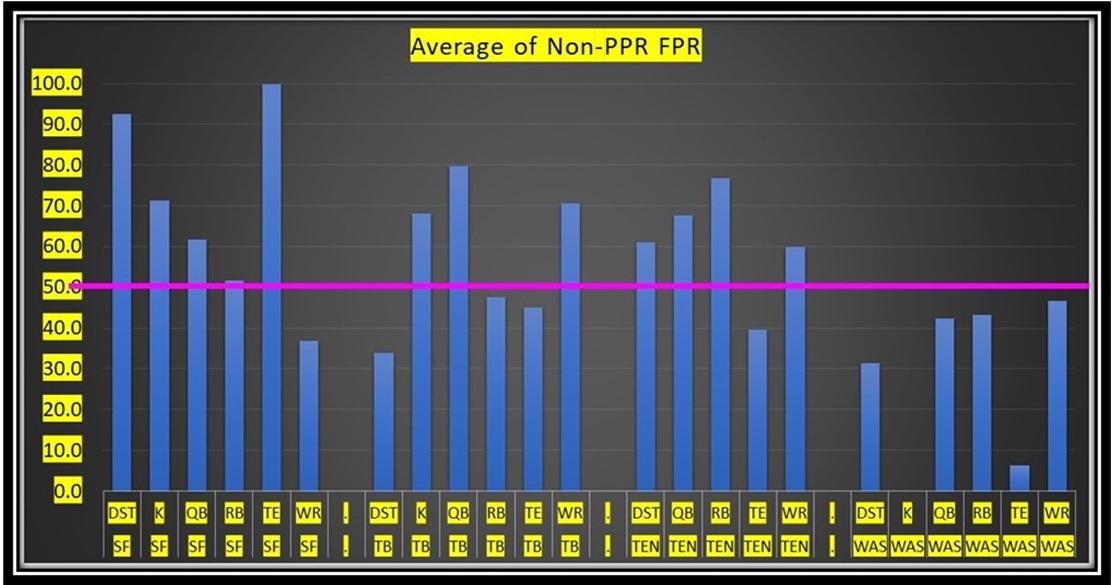 Summary for Non-PPR Rankings Landscapes . Firstly, Actually, go through the data and write 2 sentences on each team. Then use for your Non-PPR drafts. Finally, Double-check the conclusions to make sure the findings are logical.

Link to my Rankings Articles 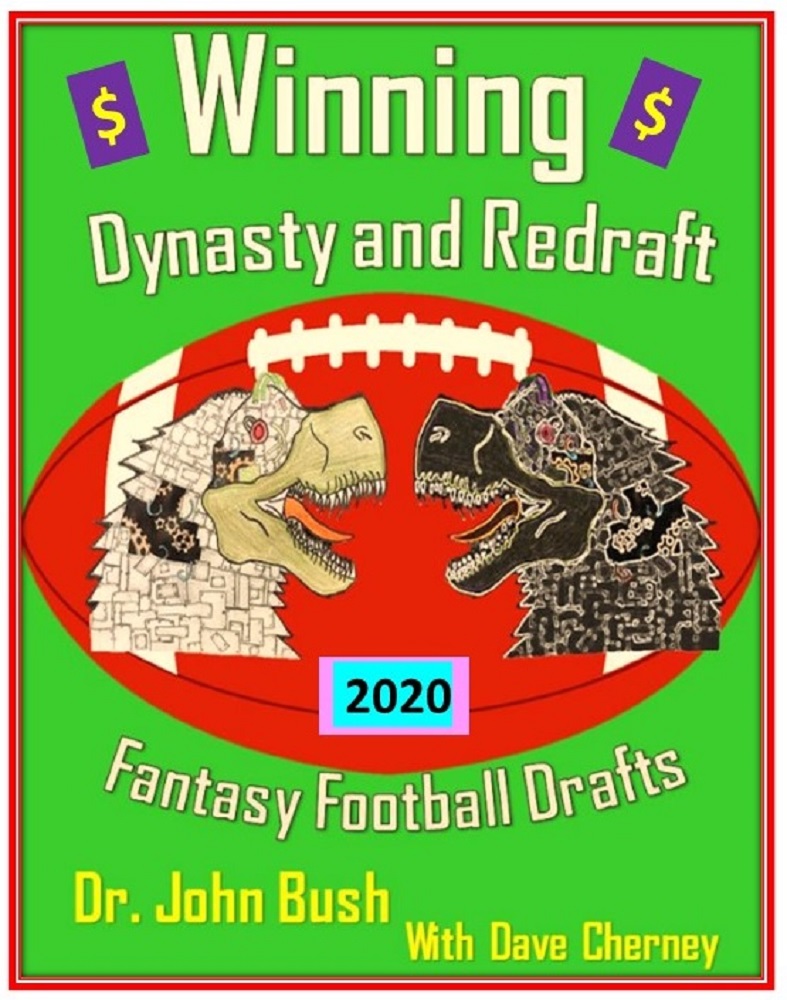 Jonathan Taylor is a Must-Draft