This report presents a fairly comprehensive landscape for week 13 player rankings in Non-PPR, PPR and Half Point PPR Leagues. I combined all together rankings which I call my all in one ranking (AIO).  I believe that rankings can be more than lists and quick numbers. Fantasy Football Week 13 Rankings With Uncertainty.

Therefore, I begin with the current Vegas views of the Week 13 games. We can “see” the predicted winners (more fantasy points!) vs losers (fewer fantasy points). Also, the level of passing can be determined by the total points from Vegas.

These labels are a great tiebreaker between similarly ranked players for your lineups! Also useful in DFS stacking where you might force players into your DFS plays from High Shoot-out games.

Notes for this week. I colorized each team name as to their defense (green easy to red hard).

KC vs OAK and JAX vs TB both have easy defenses. These shootout games seem to be supported by the defensive metrics. I suggest moving to these games in DFS.

The following tables highlight the Week 13 Match-Ups in the context of each team’s opponents DAPS. I give 2 views for analysis. The DAPs measure fantasy point surrendered over the first 12 weeks at the position. Easy to Hard (Green to Red).

I sorted by the overall OFF DAP (Offenses DAP) and that revealed that TB/ARI/MIA/DET/OAK/ATL (GREEN) are seemingly the easy teams to fight.

PIT/NO/SF/NE (RED) are the opposite teams and are thought to be the toughtest teams to face. 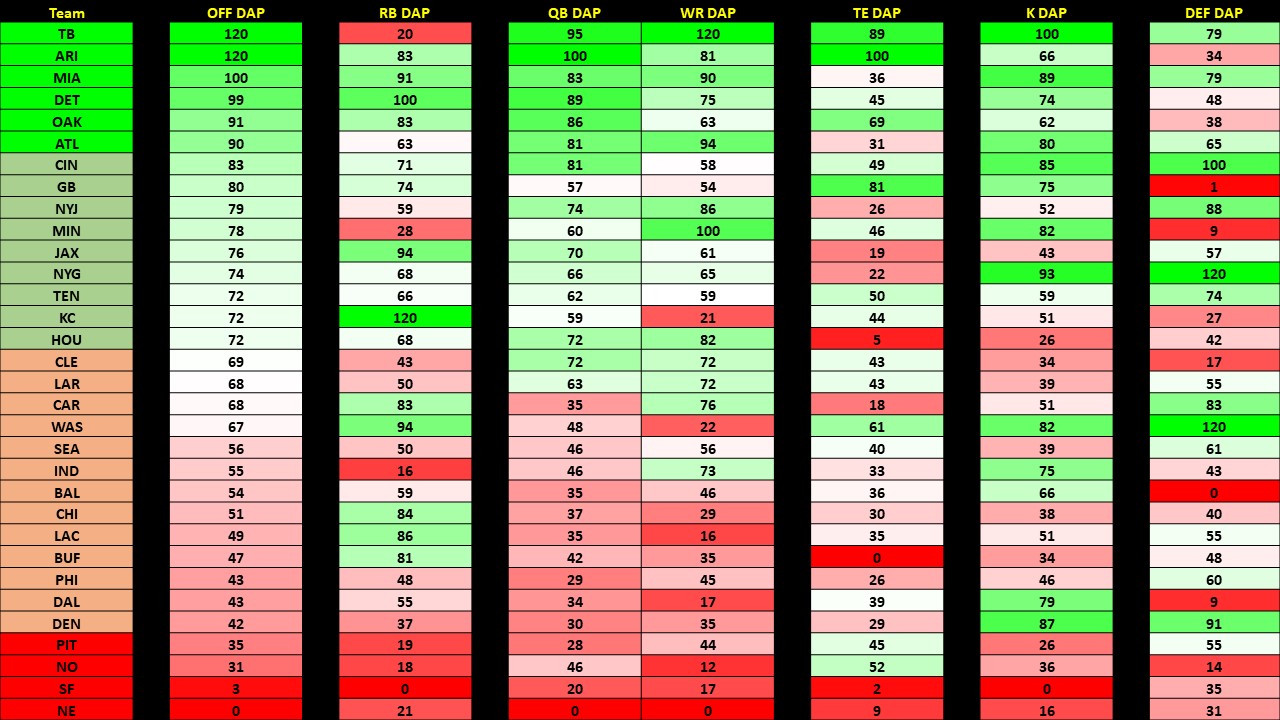 The intersection of these data streams can provide direction to lineups and DFS plays as well.

Use these charts to plan week 13 seasonal lineups and DFS plays. Hunt for these Hot-spots for key DFS moves/Trade/Waivers.

This week is of extremes 4 High vs 5 Low Games. I would then move to the 4 and away from the low. Please consider my Notes above on the KC vs OAK and JAX vs TB games

The DFS key may be collecting surprises in the other games. Find surprises!

I consider the DAPs above 70 in a tough background deserve extra thoughts. I use landscape top-down analysis using the Vegas suggestions with DAPs. See the positive scripts below.

See the positive scripts below.

See the positive scripts below.

My Landscape fantasy painting for week 13 also includes an overview of each team and a grand player FSP Ranking (Fantasy Sports Professor Rankings) average. These rankings should move you to the top teams and away from the lower teams.

In beginning my weekly rankings I obviously use VEGAs Metrics and DAPs (See Above). Also, I calculate all players I rank in the week and get the average FSP Ranking. The raw averages and scaled averages give us a nice Team Level landscape which is useful I think about generating DFS and seasonal lineups.

In general, these metric points to the direction of my choices on average. DFS Stacks might be better within positive teams this week.

Interesting that LAC/CLE are top-rated vs the DAPs/VEGAS want to knock them down. I interpret this to mean these teams have the talent to achieve more than thought. Caution, however, is suggested.  I try to not overdo Vegas and DAPs in my Rankings Gumbo to figure out the player talent levels. Tiebreak with Vegas/DAPs metrics. Talent is first then other metrics.

The plot lets you see the differences in a visual way. Note LAC vs NO is one and two but this week the difference is 20% between the two in a vacuum.  Note WAS is off in its own space. Suggest caution in WAS players.

Remember high uncertainty only means the range of outcomes is large. Thus rankings of players that are highly uncertain should be treated with caution. It does not mean they are low ranked but my rankings would be less accurate!

I use the uncertainty levels and determine the counts of players ranked as High, Avg, and Low uncertainty. The % of each type of uncertainty is then calculated as %H, %A and %L.  The High H/L metric implies a team with players of higher week 12 uncertainty whereas the lower metrics imply lower uncertainty exists. Red Colorized Teams are more uncertain this week!

I annotated for week 13 the teams

The Plot of Week 13 Uncertainty Teams

Nice Visual for UNC levels. Focus on these for DFS move to the lower UNC teams if all else is equal! Extremes in PHI/DET/MIA/ARI/TEN/OAK etc and that implies caution as your plays.

I present my week 12 FSP rankings with UNC levels for all positions. These average rankings (end column) are sorted High (Purple) to Low (Yellow). I combine my PPR/HALF PPR/NonPPR rankings for an all in one (AIO) experience.  Analysis of these metrics that suggest it may be better for fantasy players to see/use a global ranking.

Additionally, I list the player’s rankings with their UNC level of High/Avg/Low. Combining all league types leads to different UNC levels. I show you the complete view of your analysis.

The DST/K/QB are the same under any scoring system and thus they have only one UNC level for week 13.

RB/TE/WR will and can have multiple views of week 13 FSP rankings and UNC levels. Use for deeper analysis. 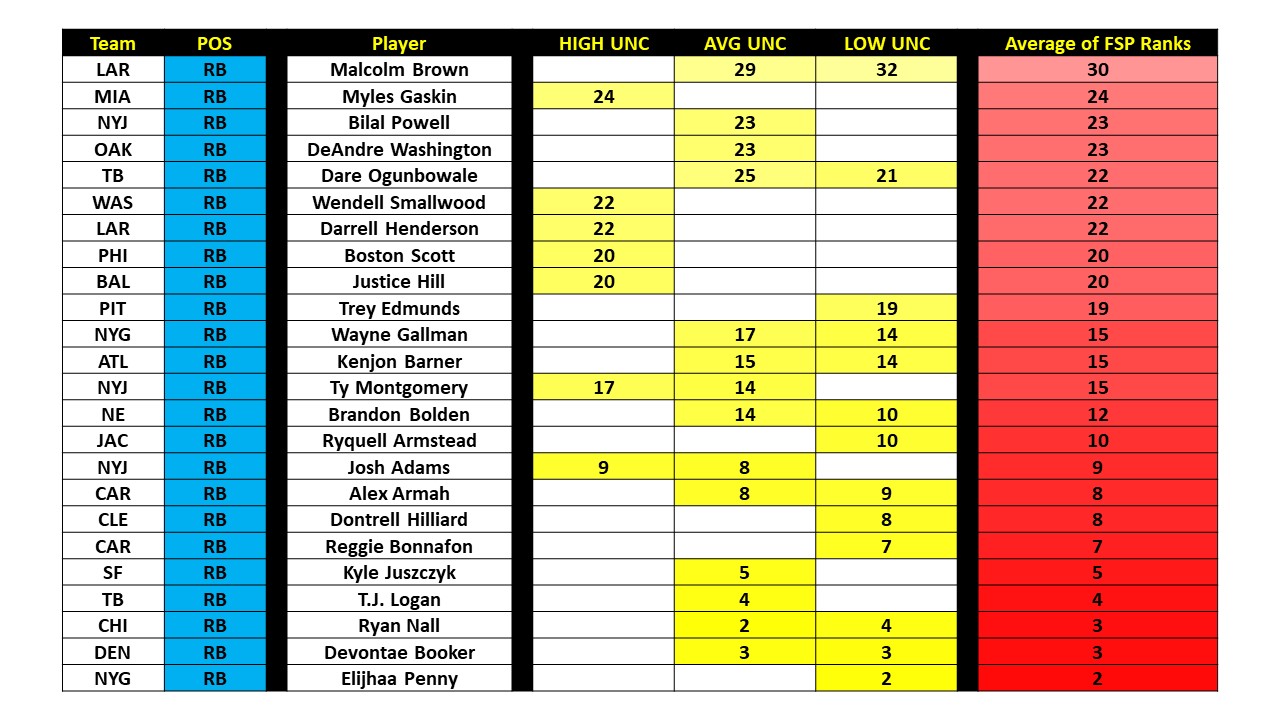 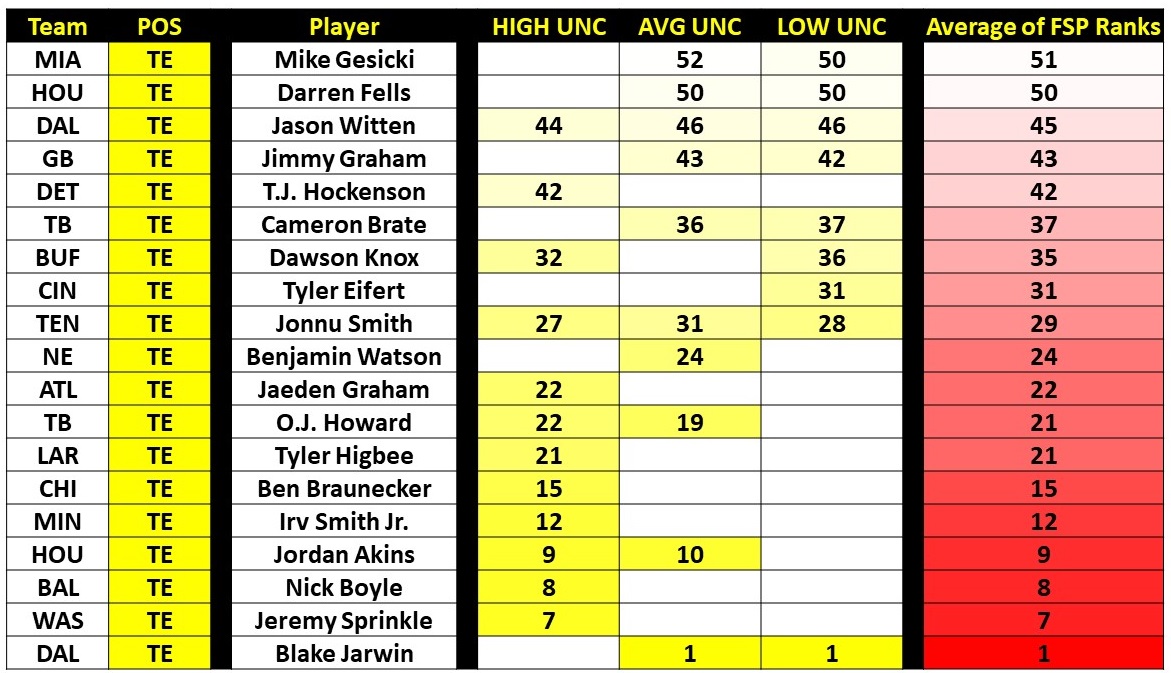 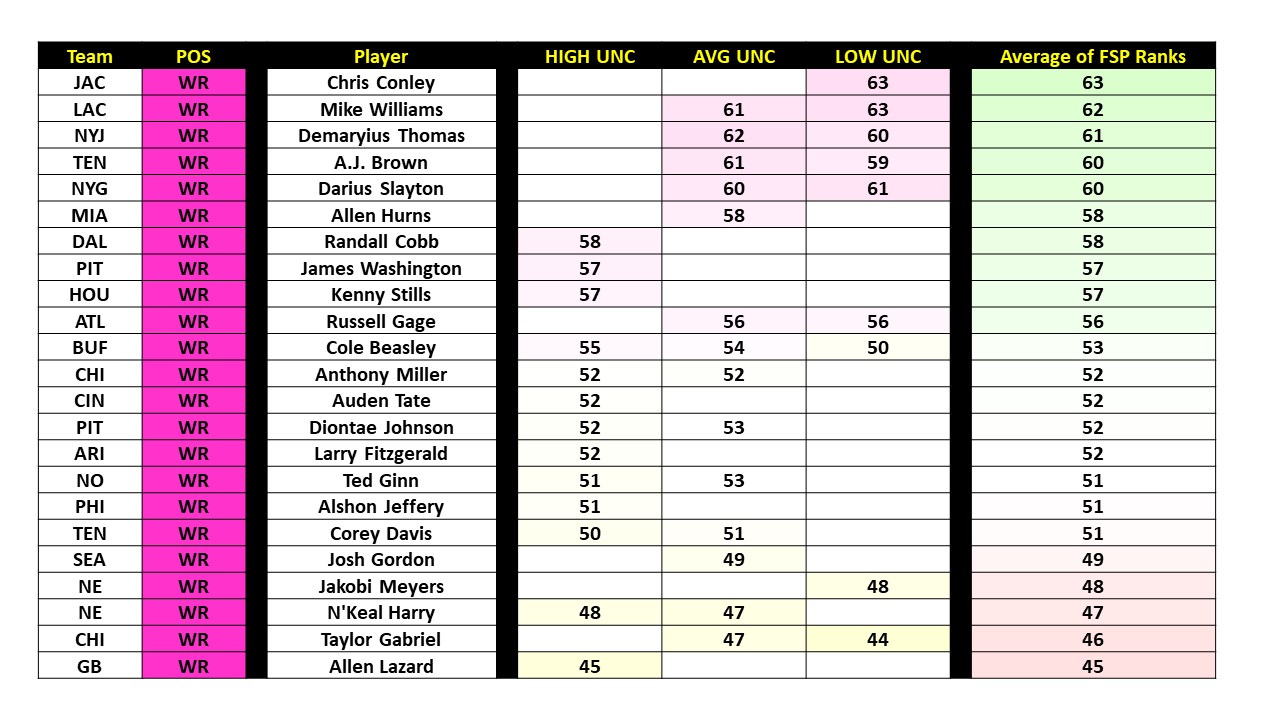 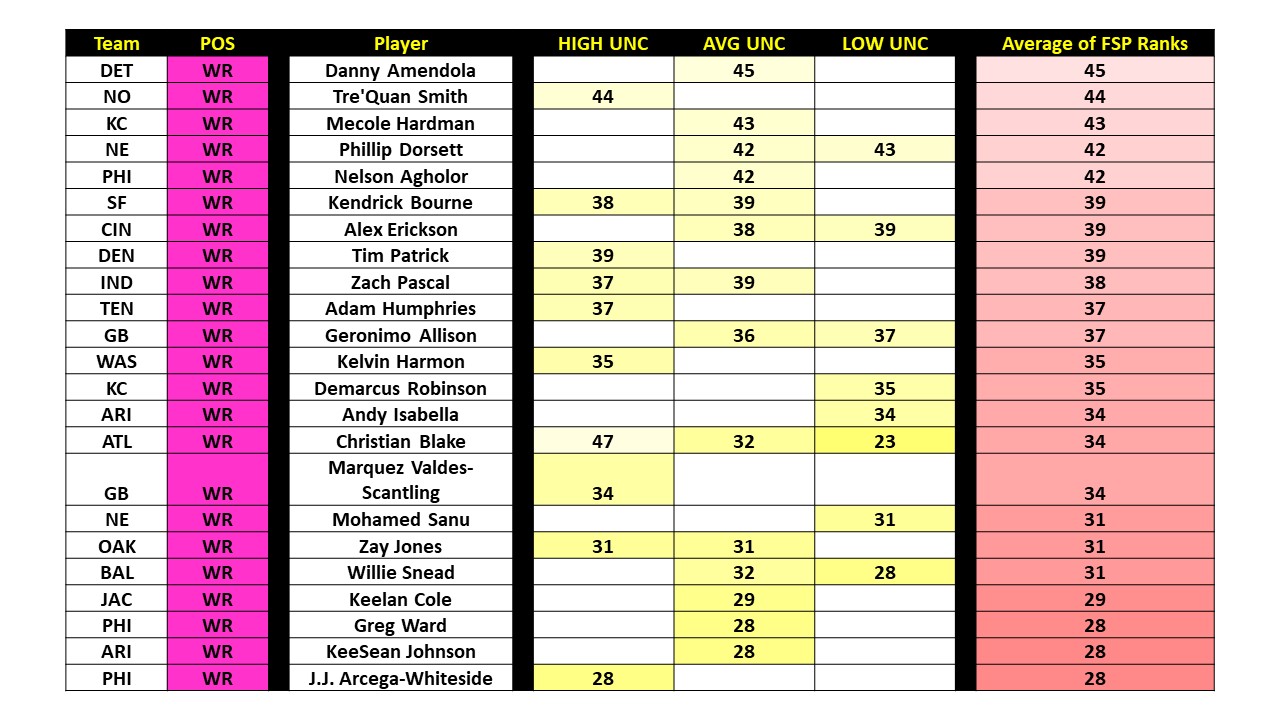 Players within their team environment is shown below.  These Team level FSP rankings with UNC levels view spot pecking orders, usages within the positions, and team strengths and weaknesses. Stroll through and get the vibes for the team! I like to roll through and note the averages and green colorizations.

All sections should be in contexts of VEGAS/DAP/UNC levels. 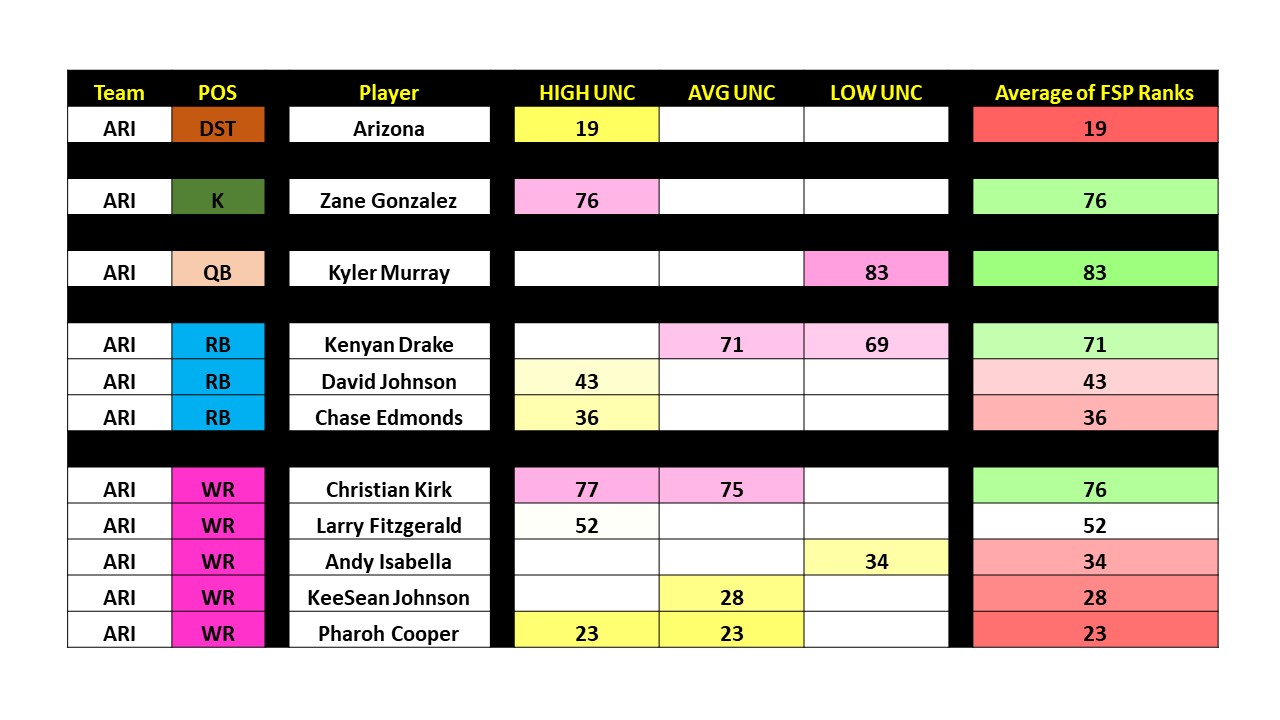 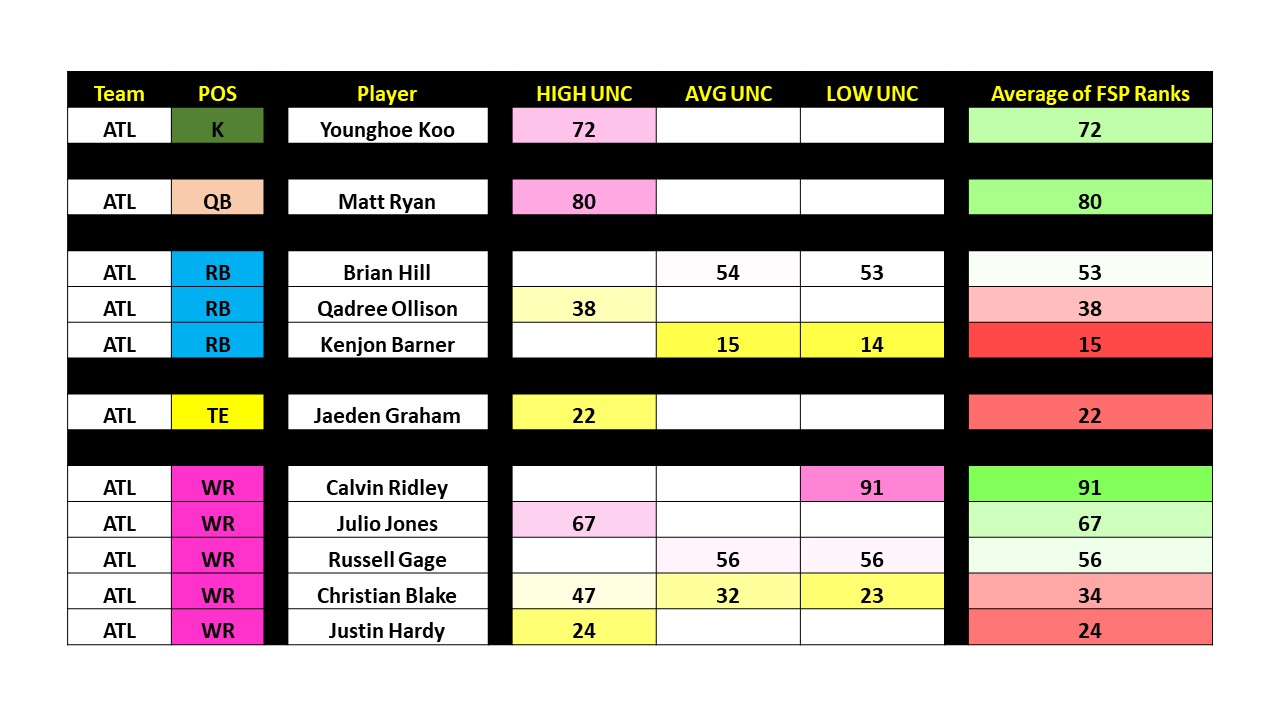 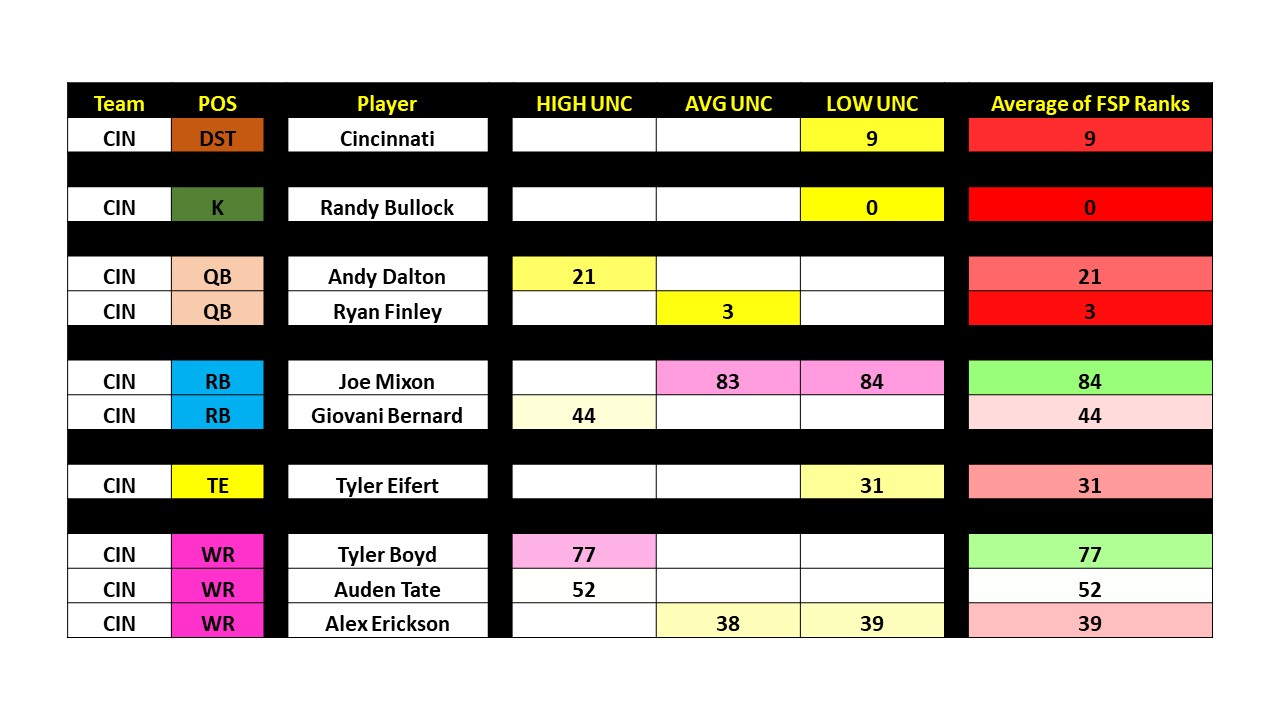 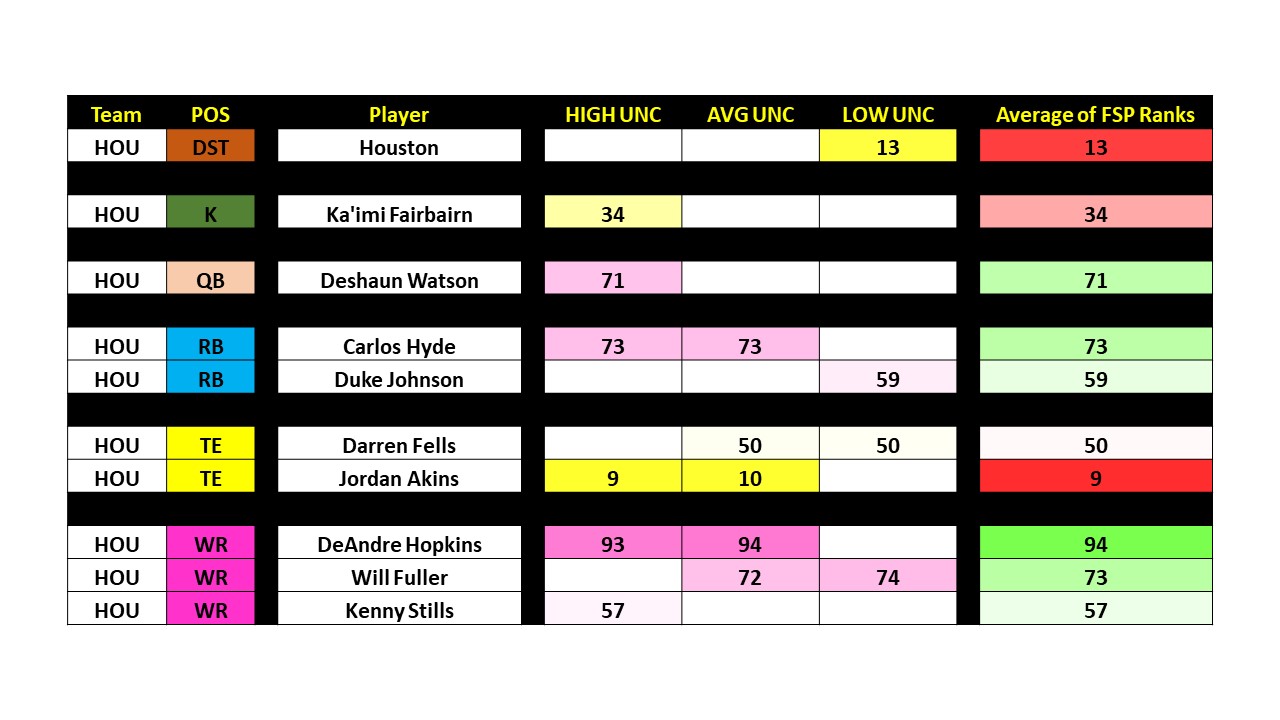 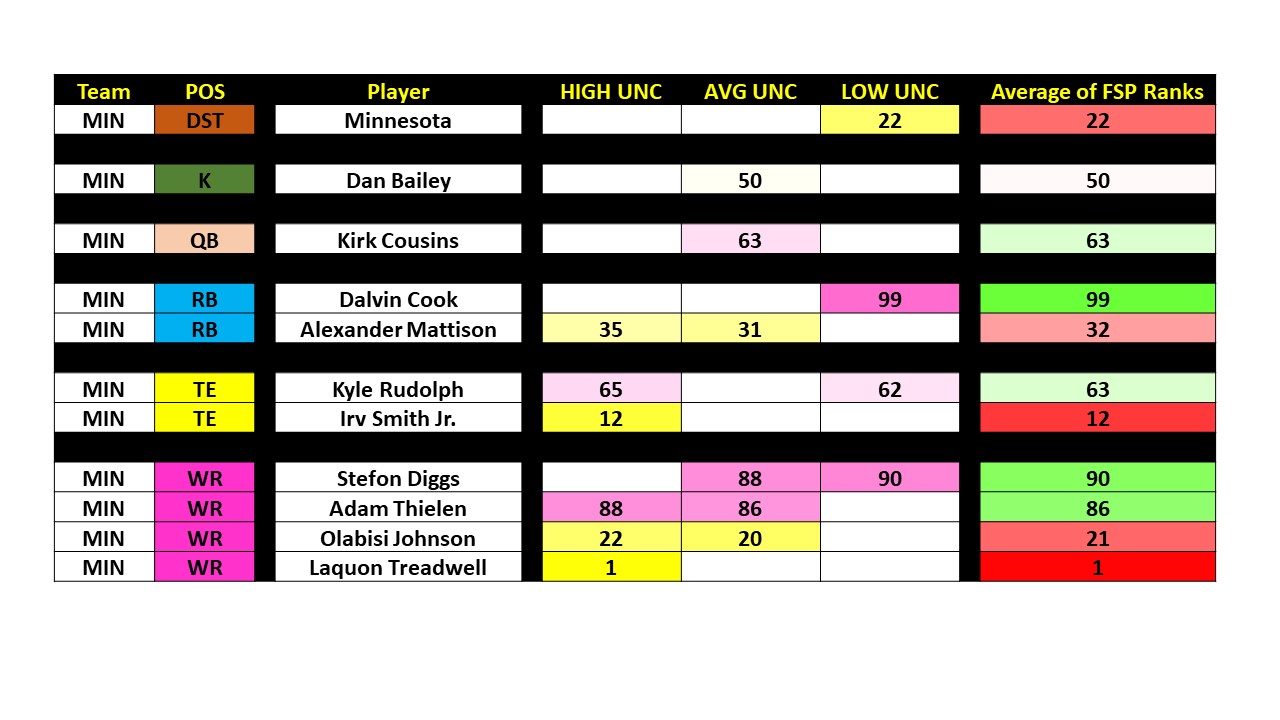 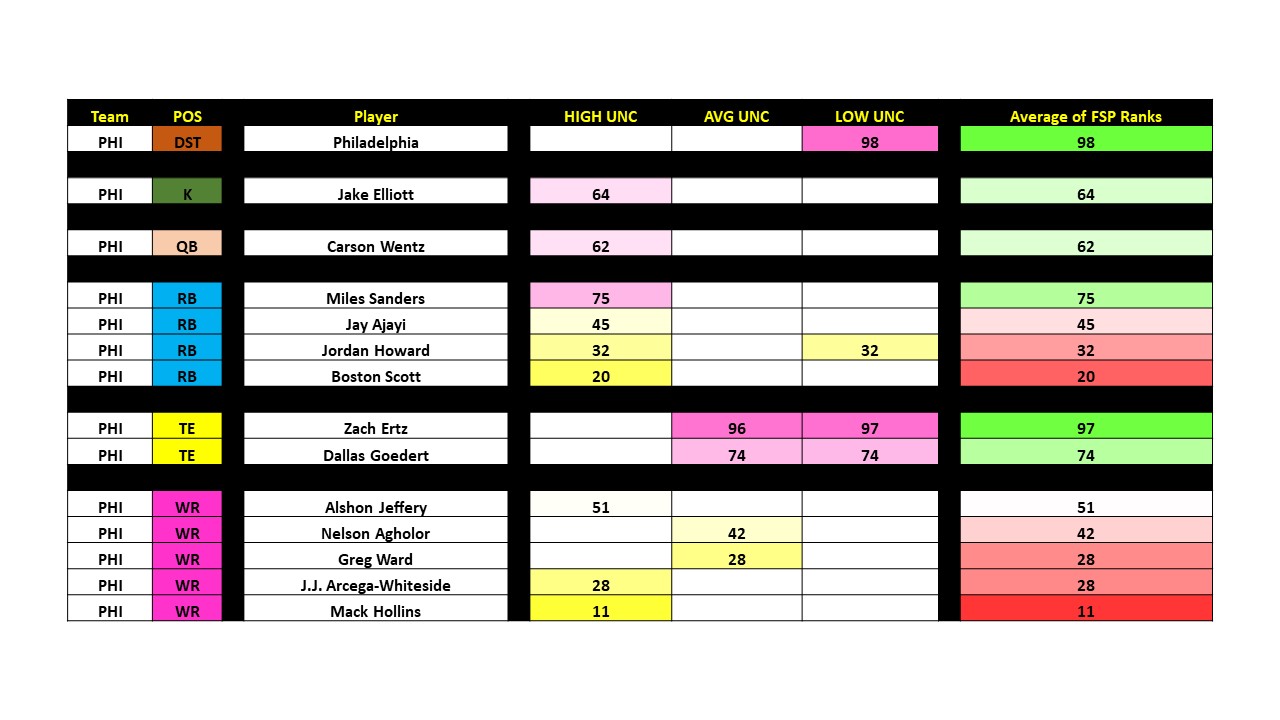 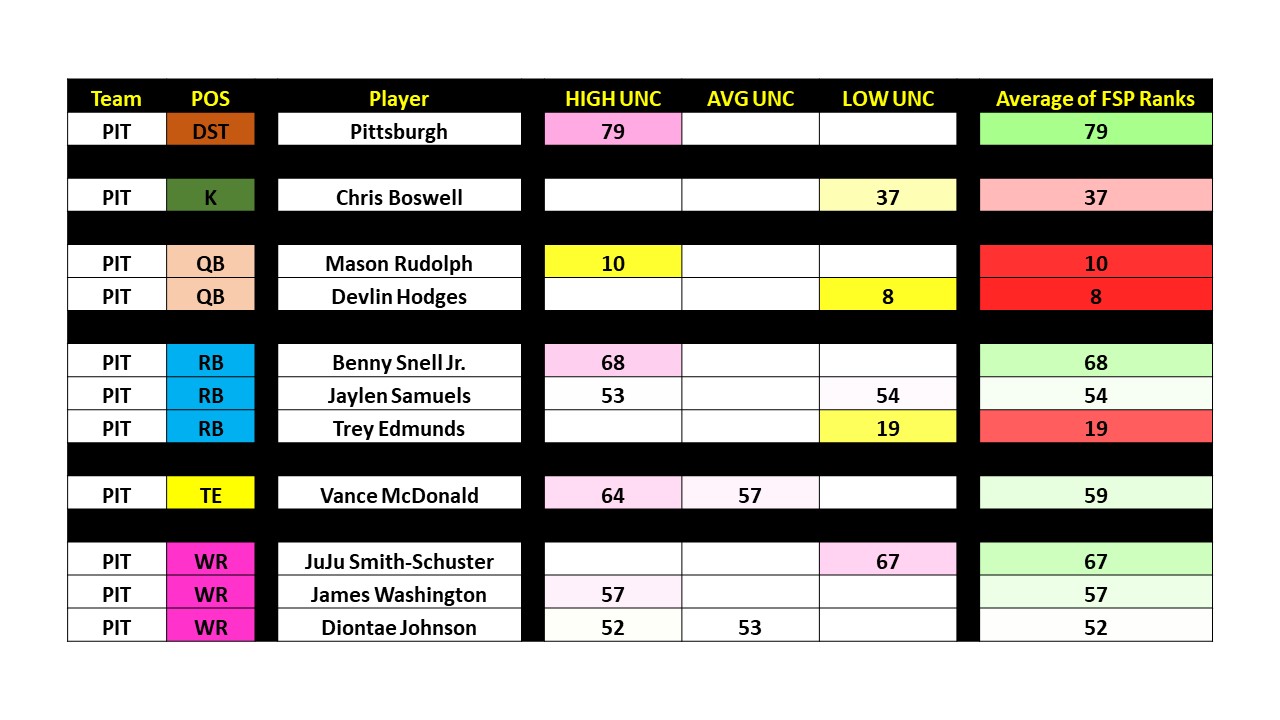 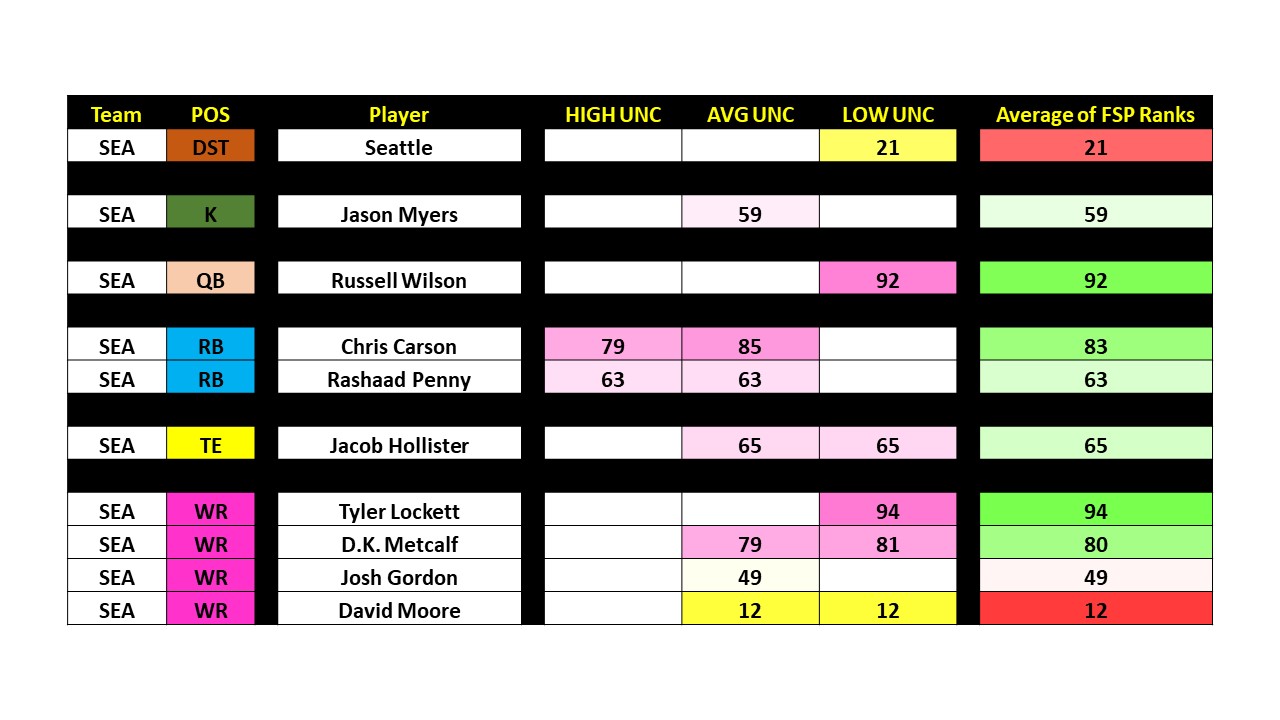 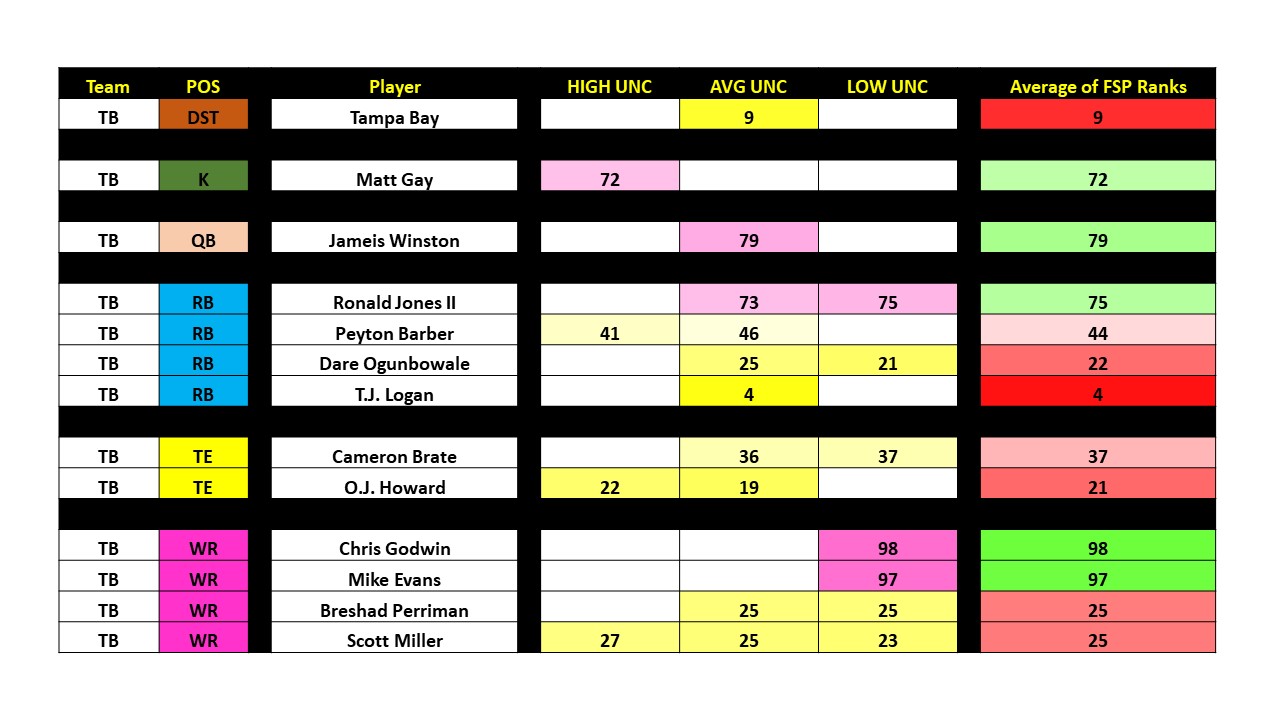 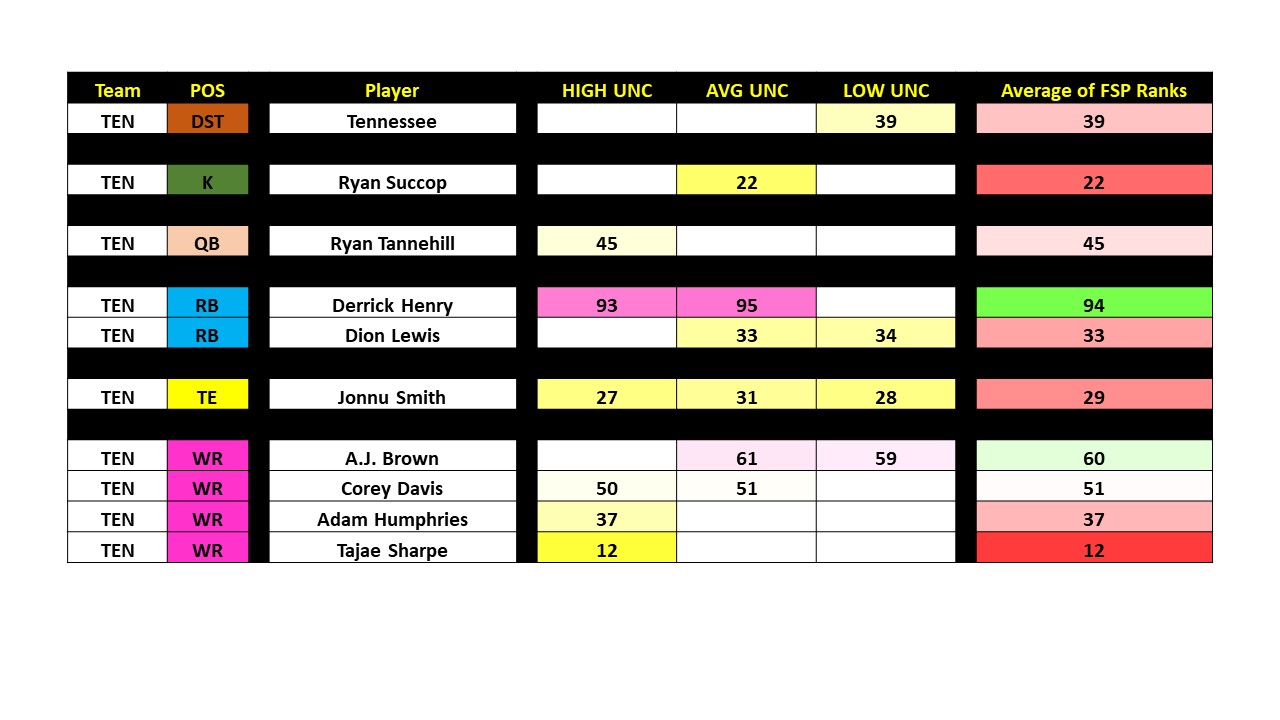