Five Story Lines To Watch For-

When we stop and consider why most people watch this whole MMA thing in the first place it’s pretty simple, most people like to be entertained. Watching two guys just “compete” isn’t enough for the average fight fan, they want to see an entertaining contest with fighters that are really rolling up their sleeves and getting after it. If you fall into this category, the UFC Fight Night 40 main-event is just the match-up for you. Matt Brown and Erick Silva may not be marquee names or highly ranked talents but I would make the argument that this the most exciting UFC headliner that’s been booked so far in 2014. Sure Hendricks/Lawler, Shogun/Henderson, and Barao/Faber would all disagree with me, but I don’t think any of those fights featured fighters with the same kill or be killed mentality as Brown/Silva. Flat out, if you aren’t really crazy about the sport and want to see what the hype is, I’d recommend tuning in to this Saturday night’s main-event. There are no guarantees in professional athletics, but this headliner being a memorable encounter is about as close to a guarantee as you are going to get. 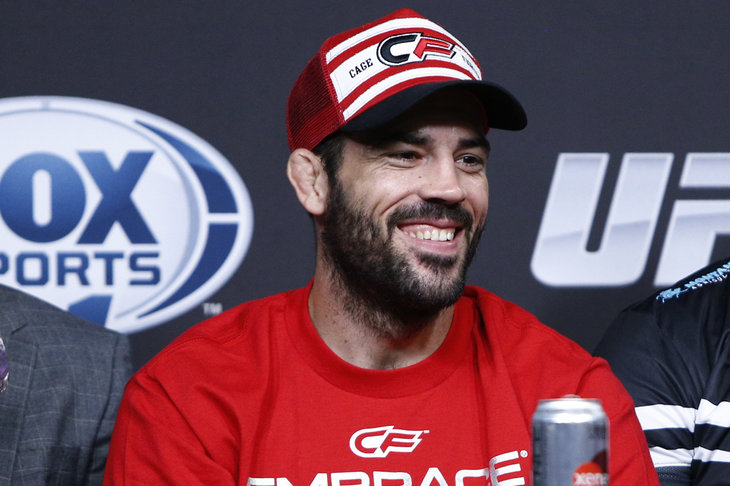 This Matt Brown come back story is the kind of stuff that they make bad fight movies about. The average-Joe tough guy brawler, who loses as much as he wins finally gets his head in the game and starts really thrashing other fighters. But nope there hasn’t been anything scripted about the “Immortal’s” unlikely surge that has him hovering around title contention. Matt Brown lost four of five bouts in the octagon between March 2010 and November 2011, and it seemed like Brown’s time in the UFC was coming to an end. But the UFC gave Brown another chance, and he has made the most of it rattling off six straight wins including five via knockout. Brown now receives his first headlining contest after earning impressive victories over Mike Pyle, Mike Swick, Jordan Mein, and Stephen Thompson. An impressive victory for Brown over a fighter like Erick Silva could put him in a title eliminator to close out 2014. Not bad for a guy that was on the verge of being released a little more than two years ago. Can Matt Brown keep his Cinderella story alive and keep clawing his way into title contention with a victory in his native Ohio?

Let me start this post by stating that based off of explosiveness, agility, and aggressiveness, Erick Silva should be a top five 170-pound fighter in the world. Instead UFC fans have seen a fighter with all the potential in the world come up short during his breakout opportunities against elite talent. Sure he looks amazing against the guys he’s supposed to beat, but Silva has consistently come up short when he takes a step up in competition. After already losing bouts to top fighters like Jon Fitch and Dong Hyun Kim, will the third chance against Matt Brown be his breakout moment? Vegas odds-makers have him as an almost 2-1 favorite over the red-hot Matt Brown, which is just more proof of how much is expected from the explosive Brazilian. At 30-years-old the time is now for Silva to climb into the top-10 and prove all the hype around him when he joined the UFC in 2011 was justified. Will Silva lay waste to Brown in spectacular fashion, or will he once again come up short in his biggest career bouts? The potential is obviously there, but like most fighters would tell you, the fight game is more mental than physical.

4)    Middleweight Strikers Collide In The Co-Main-Event-

When you stop and look at the 185-pound match up between Lorenz Larkin and Costas Phillippou it reminds you why MMA is such a special sport. Sure this match-up on paper looks like a typical striker vs. striker contest, but when you look closer it is a beautiful clash of styles. Sure both men prefer to fight on their feet than on the ground, but both have their own unique styles that promise to make this a memorable encounter. A former Strikeforce fighter, Lorenz Larkin is one of the most creative kick-boxers on the UFC roster. He uses lightning fast kicks to break down opponents methodically, he also posses very stout take down defense. Against Phillippou he faces a 34-year-old Middleweight known mostly for his sturdy chin and crisp, technical boxing. While fans would be wise to not expect high level grappling in this one, it should still be very interesting to see which one of these men’s styles proves to be more effective when they trade on their feet. Will Costas heavy fists be enough to combat the diverse kicking game of Larkin? Not sure, but it should be exciting watching these two men figure it out.

5)    “New Breed” At Lightweight Means Bad News For The Division-

In MMA when most fighters hit a rough patch and drop a few fights in a row, fighters consider losing some weight and moving down a division. Erik Koch dropped two fights in a row in 2013 at 145-pounds, but instead of moving down in weight-class, he moved up to 155-pounds.  Koch said that at 25-years old, the weight cut to 145-pounds became too much to bare with and felt it would be better for him long-term to fight at a more natural 155-pounds. In Koch’s first outing at Lightweight this past February it appeared that his punching power actually increased going up in weight as he finished Rafaello Oliveira in 84 seconds by knockout. In his sophomore outing he takes on Daron Cruickshank on the UFC Fight Night 40 main-card. Cruickshank is a versatile striker and should be a much tougher assignment than Oliveira was, but I am excited to see Koch in his new division. “New Breed” was a top ranked 145-pound talent who was actually penciled in to fight Jose Aldo for the world title on two separate occasions before injuries ruined both fights. The talent is obviously there for Koch and with a few more impressive victories he could find himself in some meaningful fights at Lightweight in the not so distant future.