Last article we took a look at a post free agency mock for the AFC East and now we move on to the AFC South. The Houston Texans were the favorite to come away with the division crown, but injuries and poor quarterback play ended up making them the worst team in the league. The Jacksonville Jaguars weren’t much better than the Texan, but coach Gus Bradley made some food free agent signings and with a strong draft looks to be moving in the right direction. The Tennessee Titans finished in second in the division, but injuries to Jake Locker really hurt what they were trying to do. Despite an injury to their potential Hall of Fame receiver Reggie Wayne the Indianapolis Colts finished in first place. Andrew Luck carried them to a playoff victory, but they still have significant holes they need to fill as well. That all being said, here are my predictions for the first round picks of each AFC South team.

Two years ago the Texans were coming off of a second straight year where they were division champs and had won a first round playoff game. However, things did not go nearly as well for them in 2013. Injuries really hurt them, but poor quarterback play was what made this talented team the worst in football. Matt Schaub, who is not in Oakland, was benched mid-season for Case Keenum who played decent, but could never get this team trending upward.

Enter Blake Bortles. While he isn’t my favorite quarterback, his size, athletic ability and leadership make it easy to see why teams fall in love with him. Bortles has shown the ability to lead UCF to a BCS Bowl game and bring them out with a victory. He has a strong arm and can escape the pocket to make plays. His size fits the mold of the kind of quarterbacks Bill O’Brien likes under center. Bortles does have some flaws however, and the main one I see is his decision making. It seems like every game that he has 2-3 passes that you just look at and say to yourself, what is he thinking? He also has some footwork and mechanical issues that whoever is coaching him will have to work on.

A lot of people probably expect the Jaguars to take a quarterback here and they need one. However, Gus Bradley is a defensive coach from Seattle and it will be hard for him to pass on a defensive player who has this kind of potential. The Jaguars defense didn’t get much pressure on the quarterback and that has to improve if they want to be a playoff team. They re-signed Chad Henne and he can be a vet starter for them at quarterback until they find their starter for the future. Clowney would add a presence on that defense that they haven’t had.

Clowney doesn’t come without his flaws as well, but his talent is so great that even him playing at 75% is better than most. You also have to wonder about his conditioning at South Carolina as well. He would disappear for stretches of a game or have to go to the sideline. Whether that was due to poor conditioning or an injury we don’t know. Clowney isn’t just a pass rusher either. He plays the run well and won’t be a liability in any phase of the game. He can slide and stunt inside as well, showing how strong and tough he is. Clowney is one of the best defensive prospects to come out in a long time and a defensive coach like Bradley will be able to maximize his talent. 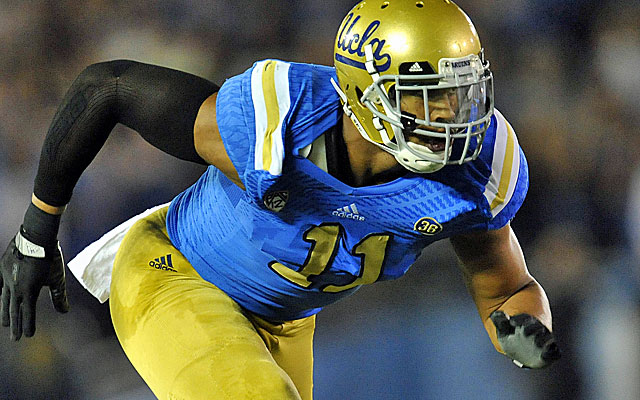 The Titans could go with a cornerback here like Justin Gilbert or Darqueze Dennard, but Anthony Barr and his tie to Lou Spanos the linebackers coach, who was the defensive coordinator at UCLA the past two seasons makes him a more likely candidate. The Titans need pass rush help and Barr is an athletic, talented, raw pass rusher. In the NFL you need a quarterback and you need to be able to get to the quarterback to win consistently and the Titans haven’t been able to get to the quarterback well enough lately.

I am not as high on Barr as other, but there is no denying the potential is there. The big question is can he ever reach that potential. He doesn’t have a real good natural bend around the edge and has mostly relied on sheer athleticism to beat tackles in college, but that won’t work in the NFL. He is going to have to get stronger and develop some pass rush moves. He also really needs to work in the run game and in coverage because those are not strong areas for him. He tackles well in the open field and if he can develop some pass rush moves and get stronger will be a nightmare for NFL tackles. The colts do not own a first round pick because they traded it away to Cleveland for Trent Richardson.

NFL Draft by the Numbers