Carson Palmer was fantasy relevant once more and is becoming a borderline starter in 12 teamers. This time out he’s facing a really soft matchup so might be worth a start if you’re having bye week blues. I can see Carson throwing for around 300 yards and a pair of TDs to add to a pick or two. 15-20 points should be on the cards for the Cards QB.

Andre Ellington had a reduced workload and right now I just can’t trust him to get consistent production, but this is purely because Arians appears to refuse to utilise him enough. He had 11 carries for 55 yards whilst Mendenhall had two more carries and 13 less yards. Ellington is the future TB of this franchise in my opinion and I just can’t understand why Arians won’t unleash him. Right now it’s impossible to rank them higher than a low end flex, though we know Ellington is more likely to do more with less carries. 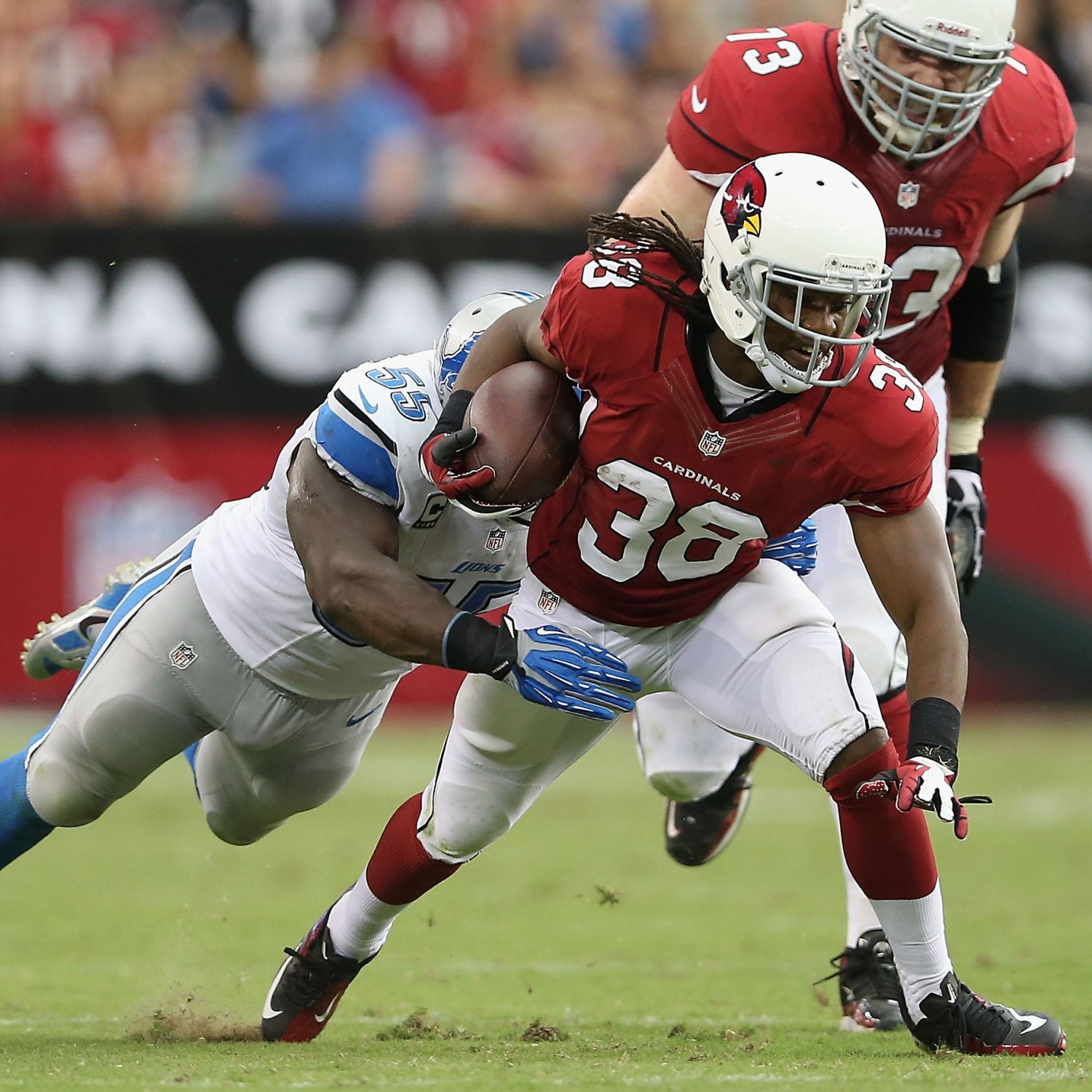 Andre Ellington has undoubted talent, yet Bruce Arians continues to spread the carries around. – photo from bleacherreport.com

Larry Fitzgerald was disappointing last week but Andre Roberts, a guy I loved pre-season, lead receivers with 5 receptions and 72 yards and a score. It’s too early to add him in 12 teamers as this is certainly an exceptional performance. Start Larry as a WR2 against the Jags, and Roberts is a solid WR3 in 16 team leagues.

Rob Housler has been terrible all year. Absolutely terrible.  He scored 57 yards and a score on 4 catches last week against Houston. Whilst this one performance doesn’t change that, it does make owners step up and take note. In a season where we have precious few productive TEs, Housler could and should be a top 10 talent. Pick him up if he’s there in 16 teamers but don’t start him just yet unless you’re desperate.

Cardinals D/ST against the Jags are a pretty good defence. Top 10 floor and top 3 ceiling.

Colin Kaepernick was flat out terrible last week. I wched the game wishing for Alex Smith back at points (and in my lower moments, Troy Smith). In all seriousness Kaepernick’s passing game was dreadful, but this was to a great extent down to his receivers. Once Vernon Davis left the game with a head injury Kaepernick looked to other receivers and none showed up. Davis looks set to play this week, so Kaepernick will have his best weapon back available. However, the Saints allow the 3rd fewest points to opposing fantasy QBs. I genuinely think this could go either way, since Kaepernick has often come back swinging from bad games. This is a defining moment in the 49ers season and Kaepernick has to be a part of that. If you absolutely need a win then I’d risk Kaepernick as a top 5 upside, but if you’re in a more favourable position then don’t risk it. Definition of a boom or bust play this week.

Frank Gore is the key to the 49ers offence but Jim Harbaugh doesn’t appear to realise this. If Gore gets the ball for 20+ times a game the 49ers establish a running game. Last week he got 82 yards on 16 carries against a tough D, this week I like Gore as a RB1 upside. Gore’s best fantasy attraction is that he is a clear #1 back in that offence, so if the 49ers rush the ball 30 times, he will get at least 20 of those carries.

Anquan Boldin has been poor since the start of the year and is almost droppable in 10 team non-ppr leagues. Like Kaepernick he is a boom or bust this week. Once Michael Crabtree is back on the field Boldin’s value and production should take a shot in the arm. This won’t be for another week or two at least I think.

Vernon Davis looks like he’ll start this week but a concussion is always a tough one to get medical clearance for. A gametime decision but I expect Davis to be a top 10TE this week and should be started if you don’t have one of the big names at the position.

49ers D/ST are still one of the best in football. Against the Saints they can’t keep them under 20 points in all likelihood, however they will force turnovers and should still be startable in 12 team leagues.

The 49ers still possess a top 5 NFL and fantasy Defence – photo from bigblueblitz.com

Russell Wilson helped the Seahawks rout the Falcons with a 20+ point performance that has been his staple in recent weeks. I like him to continue that against the Vikings at home. Start Wilson as a QB5-8 this week.

Marshawn Lynch continues to carry the ball early (and late) and often. 24 carries saw him amass 145 yards and a score on the ground. Can he do that against the Vikings? I see no reason why not, as the Vikings allow the 7th most fantasy points to RBs on a weekly basis, more than the Falcons do, even after last week.

Percy Harvin will make his debut against the Vikings but his snaps will be limited – photo from blog.seattlepi.com

Percy Harvin is a name on all fantasy owners lips this week, however considering Seattle’s comfort in the NFC West, I can’t see any reason why they’d rush him back onto the field when he could be a key player down the line. He’s a WR30 this week for me but his limited game time makes his ceiling low, even given his talent. Golden Tate caught a TD for the second time in two weeks and he’s looking like the key option in that passing game. Start him as a high WR2 in 12 teamers. Doug Baldwin and Jermaine Kearse also put forward a case for more targets as they combined for 8 receptions and 150 yards and a score. Both should be owned in deep leagues and I’d start either as a low end flex, even with Harvin back.

Zach Miller had no catches this week and Luke Willson had one catch. Don’t own or start either.

Seahawks D/ST should be started as a top 5 D/ST potentially this week.