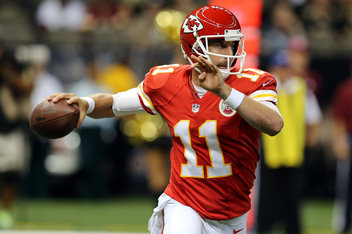 Smith is a matchup based starter this season, and his week 1 matchup is favourable. photo from www.sbnation.com

Alex Smith will begin his Chiefs career against the Jaguars, and should have a reasonable outing this week. Smith is rarely going to be a top 5 QB in fantasy any week, but this week he may dip into the top 12 – not bad for a guy drafted in the late rounds. I expect him to throw for around 200-250 yards and a score or two this week.

Jamaal Charles is not a guy you should be benching any week unless he’s injured or on a bye… That being said his matchup is nice this week so he makes for an even better starter than usual. Charles should be in line for a top 8 performance this week, perhaps even top 5 in PPR against a poor Jags run defence who allowed over 20 points per game to opposing RBs on average last year (non-PPR, 4th most). Start this guy.

Dwayne Bowe is likely to be Smith’s favourite WR target this year, and will want to start with purpose and connect well with his new QB. I can see Bowe being a high end WR2 this week in 12 team leagues and should be good for 8-12 points at least. Donnie Avery is perhaps a low end flex in deeper leagues but no more at this point.

Anthony Fasano is the starting Tight End on the Chiefs roster according to www.ourlads.com, but the man I’m looking at is Travis Kelce. The Cincinnati Rookie has eerily similar frame to Vernon Davis, though admittedly does not have the same burst of speed as Smith’s favourite 49ers target. Whilst this week both aren’t startable – keep an eye on Kelce long term.

Chiefs D/ST was likely undrafted, and don’t seek them out on the waivers this week. Both defences in this game are poor and whilst the matchup seems pretty good there are a lot better Ds out there to hang your hat on.

Terelle Pryor has been named the starter, but do not play him this week, barring a deep 2QB league perhaps. Pryor made some impressive plays this preseason but he is nevertheless working behind a poor offensive line and has few options in the passing game beyond Denarius Moore. Pryor is worth rostering in some deep leagues but you will want to bench him for this week at least until we figure out what, if anything, he can bring to the NFL and fantasy football.

Darren McFadden should be started this week as a high end flex option. If you drafted McFadden you are aware of his health issues – if you aren’t going to start him whilst he has his health then why did you draft him? A good matchup for him here as well, should reach 12-15 points with relative ease.

McFadden’s concerns are injury related, when he’s got his health he should be starting – photo from blogs.thescore.com

Denarius Moore’s play this season is going to be undermined by the dilemma at QB. Pryor’s strength is not his throwing, but his ability to extend plays could give Moore a chance to use his athleticism to find space. However I’d hold off on Moore till we have a clear starter in place and we know what they are capable. If you must start him he is a low end flex options at this point and likely due boom and bust totals.

Barely anybody has heard of David Ausberry, the Raiders starting TE this year, however Myers did have Palmer throwing him the ball. Lay off Ausberry this week and all future weeks barring a miracle in Oakland.

Raiders D/ST should not be started in any situation this season.

Philip Rivers’s NFL career has gone from boom to bust in just 2 short seasons. Back in 2010 Bleacher Report ranked Rivers as the 7th best Fantasy QB, but the same site has put him at 26th this year. Rivers begins the season against a formidable defence in the Texans and will likely be pressured on many of his dropbacks. Rivers may put up QB15-20 numbers but I would not want to be starting him unless you play in a deep, 2QB league.

Ryan Mathews is another player who’s health frustrates fantasy owners and Chargers fans alike. Last year Mathews was worse than awful. He missed 4 games, but of the 13 he played in he scored under 10 points 11 times and only bagged one TD all season. Nevertheless he has produced in fantasy previously, and that is no doubt why you picked him. This week isn’t the best matchup for Mathews, but he could make for a reasonable flex slot. A little like McFadden, it’s hard to bench Mathews when he’s healthy given his tendency to get injured. Another guy to look at is Danny Woodhead, who might make a low end flex option in PPR leagues as well. Woodhead is going to be a boom or bust player like he proved in New England last year, though I believe his floor is higher. Woody only got 3.8 yards last year against the Texans though (5.8 in PPR) so don’t overvalue him in week 1. For what it’s worth I’d definitely start Mathews over Woodhead this week (and all weeks he’s healthy) if that’s your dilemma, even in PPR.

Eddie Royal is the starting WR for the Chargers according to their depth chart, but any one of  Malcolm Floyd, Vincent Brown and rookie Keenan Allen could become fantasy relevant this year. I would perhaps start Royal or Floyd as a low end flex in deep leagues but the rest are far too risky. A ‘wait and see’ approach would be sensible when looking at the Chargers WR corps. It’s a real shame Danario Alexander is out for the year. Gates’ fantasy value has slumped a little with age, but he’s still a top 10 option – photo from www.boltbeat.com

Antonio Gates continues to roll back the years, though last year was a bit of a down year for him. Gates is undoubtedly going to be Rivers favourite target and should be a fine PPR TE, potentially top 10 this week. I’d be happy to start Gates over the likes of Cameron, Pettigrew or Rudolph in week 1.

Chargers D/ST are unlikely to be fantasy relevant this week, and whilst their matchup could be worse there will no doubt be better choices on waivers.