This article is intended to build on the overall IDP rankings that were featured in the 2013 FakePigskin Draft Guide, which can be had for FREE by simply signing up to our weekly newsletter email on the homepage. I’ll list my top 50 at Defensive Linemen, Linebackers and Defensive Backs, showing sub-positions where necessary. These rankings are based on sack heavy scoring, a description of which can be found in my  Breaking Down an IDP Scoring System article. 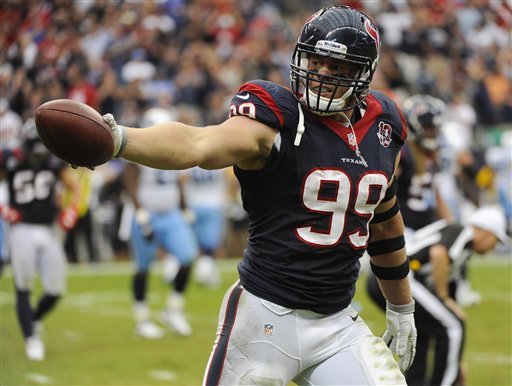 Watt is the undoubted king of all IDP players, but don’t overpay for him this year – Photo from www.footballperspective.com

Defensive linemen, split into Ends (DE) and Tackles (DT) should be considered as the Wide-Receiver of IDP, as their stats can be very erratic. It’s difficult to find consistent DLs in fantasy, but those who can get behind the line often and disrupt play can have excellent weeks, especially if they can get to the QB. If your league regards DL as one position (like NFL.com) then usually a DE will outscore a DT, though DTs are more consistent. This explains why so many DE’s are present in my top 50 DLs below:

It’s no surprise that Watt is at the top of the list which makes him the undisputed #1 IDP player this year (in both scoring formats). That being said, don’t overpay for him. Although he’s got the best shot to win the first Deacon Jones award as sack leader, Watt will not reproduce what he did last year. Some guys like Campbell and Hardy are better value picks in my opinion. Atkins is the clear #1 DT this year after he scored 150% of the next guys points last year. Don’t just go for the names you know like Suh and Wilfork (though Suh is due a big year), as they aren’t always as good in fake football as in the real world.

Linebacker is full of two types of fantasy players: Sack masters and tackle monsters. For this reason it’s important to try and get a combination of the two to ensure a balanced LB group. There is a premium on Sack masters however and they should be the targets of your first few LBs barring a few exceptions. 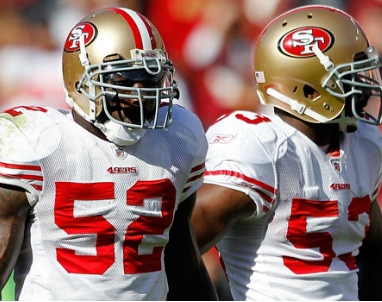 Willis and Bowman would both make excellent Fantasy Linebackers – Photo from www.sportstalkflorida.com

Miller would be atop this list if it weren’t for his potential ban, and if it does get overturned you can put him above Smith. Here you can see the premium of LBs who can get 10 sacks or more in a season with Timmons at #3 (he may not make the top 50 in tackle heavy leagues). This is why its important to know your scoring system. There is a great bunch of tackle monsters in the top 20, but Laurinaitis, Bowman, Kuechly and Willis are all guys who will almost certainly get over 120 tackles this year and can be trusted to get you 8-12 points almost every single week. Guys like Aldon Smith, Clay Matthews and Elvis Dumervil are less consistent, but can single-handedly win match-ups any one week. Last year Aldon Smith scored 59.50 points for me in his demolition of Chicago QB Jason Campbell, which helped give me over 200 points that week. If you’re starting 3 or more LBs each week I’d try and get one of these guys as they can put you over the edge any one week.

DBs are the enigma of IDP football. No scoring system exists that fully utilises them in fantasy football as the best DBs do very little statistically. However to exclude them would be foolish. The best general advice to give regarding Defensive Backs is not to draft them early. I would draft my first DB in the 20-24th round of a 30 round draft, unless one of the top guys were there. Even then it can pay to take a 5th LB or a 4th DE before you stockpiled on DBs. Secondly, don’t confuse real NFL talent with fantasy value. The best Cornerbacks are avoided by opposing QBs and as such their opportunity is restricted. Don’t get Revis early, and be wary of guys who’ve just had a huge year – they likely wont repeat it in terms of fantasy production.

Cortland Finnegan offers a little consistency at DB which is hard to find – Photo from www.Gridironfans.com

The top guys in this list offer some consistency, which is very difficult to find at DB. Finnegan has been a consistent performer the last few years and should continue to be a lock for a top 10 CB this year. Other guys like Weddle are also known for being a top 10 DB in the last few years. This sounds like poor value from a top ranked S or CB but it’s the nature of the position and exactly why you shouldn’t draft them early. Later in the ranking we find guys who play for teams in pass-heavy divisions. A DB who is facing Drew Brees and Matt Ryan twice a season (See Bucs or Panthers) is going to have increased opportunity to get tackles on WRs, pass defenses and even the odd interception. If you’re struggling to find a name you recognise late in a draft, find a player for a team in a pass-heavy division (NFC North is another) and draft a starting S or CB. This seems a crude way to pick your players but again it just reflects how poorly the position is represented in fantasy – this is the best way to combat DBs in your fantasy league.

Any further IDP questions and you can get in touch on twitter @FFMattLane. Thanks for reading!