This report presents a fairly comprehensive landscape for week 7 player rankings in Non-PPR, PPR and Half Point PPR Leagues. I believe that rankings can be more than lists and quick numbers. Fantasy Football Week 6 Rankings With Uncertainty

Therefore, I begin with the current Vegas views of the Week 7 games. We can “see” the predicted winners (more fantasy points!) vs losers (fewer fantasy points). Also, the level of passing can be determined by the total points from Vegas.

These labels are a great tiebreaker between similarly ranked players for your lineups! Also useful in DFS stacking where you might force players into your DFS plays.

The following tables highlight the Week 7 Match-Ups in the context of each team’s opponents DAPS. I give 2 views for analysis. The DAPs measure fantasy point surrendered over the first 6 weeks at the position. Easy to Hard (Green to Red).

Find the extremes as use for week 7 lineups or DFS adjustments. 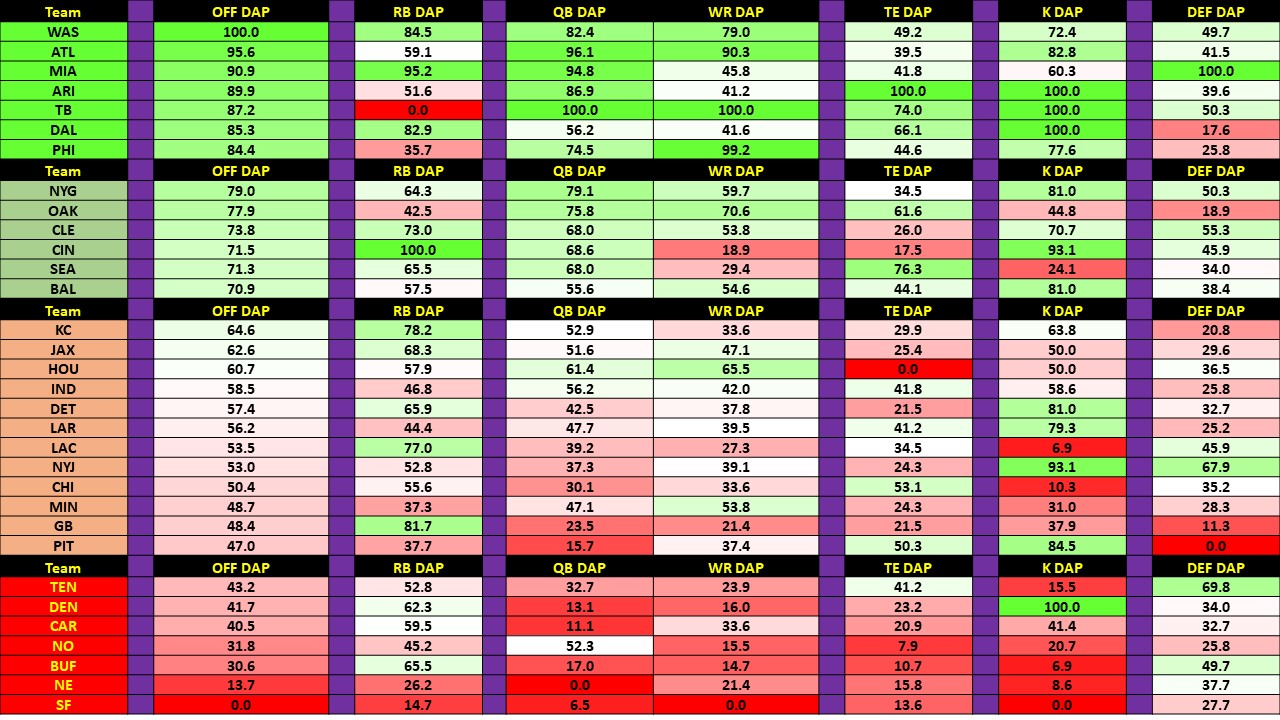 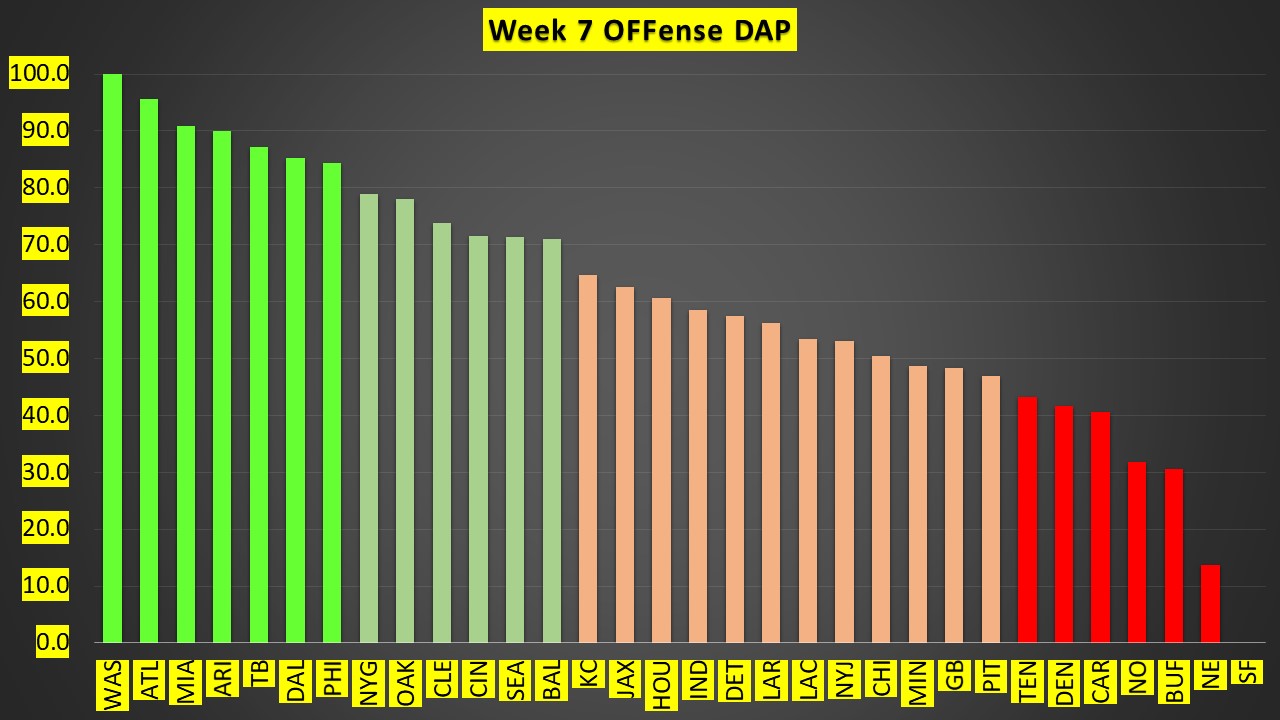 The following figures present the Vegas view with the DAPs of the teams playing in week 7.  Does the Vegas view support the DAP metrics? The intersection of these data streams can provide direction to lineups and DFS plays as well.

These figures highlight the landscapes for week 7.

The easy DAP niches are highlighted by yellow circles. Easy to Red *Green to Red

For example DAL vs PHI. Vegas picks DAL to win by 6 points. Vegas “says” the game is high scoring with plenty of TDs and yardages. The overall defenses are easy for both teams. That implies an offensive based game. Move toward this game. 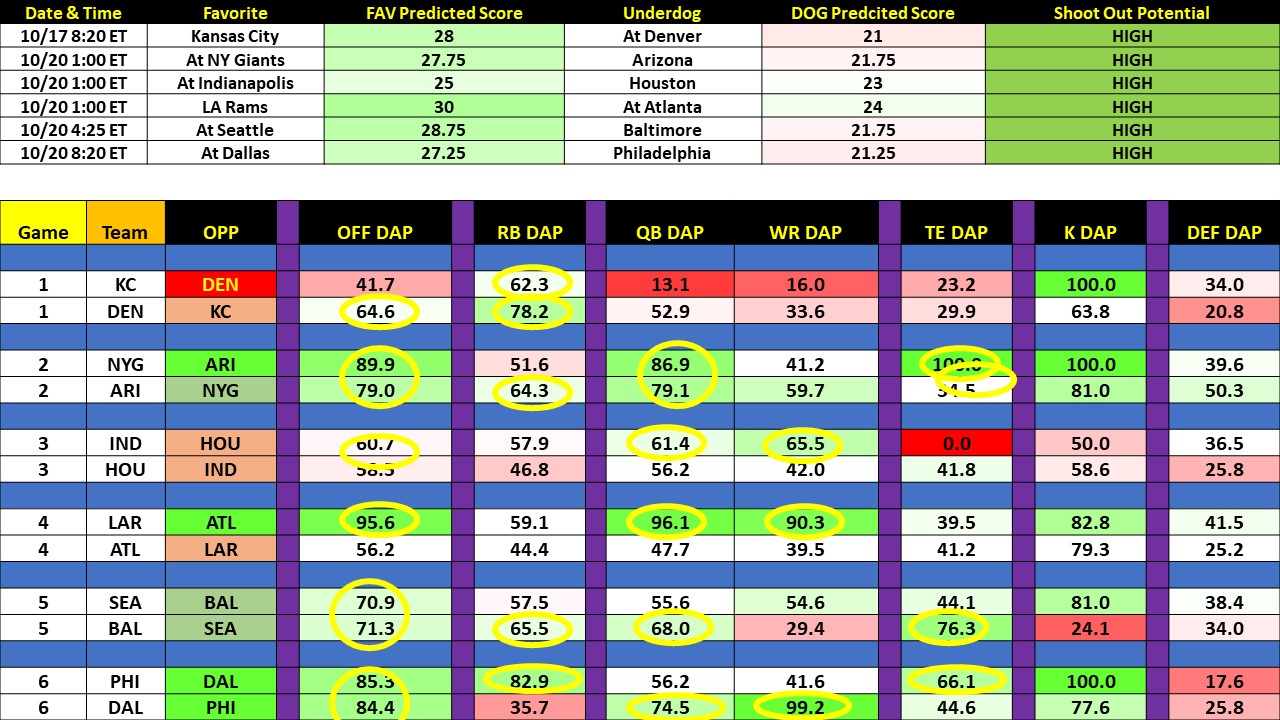 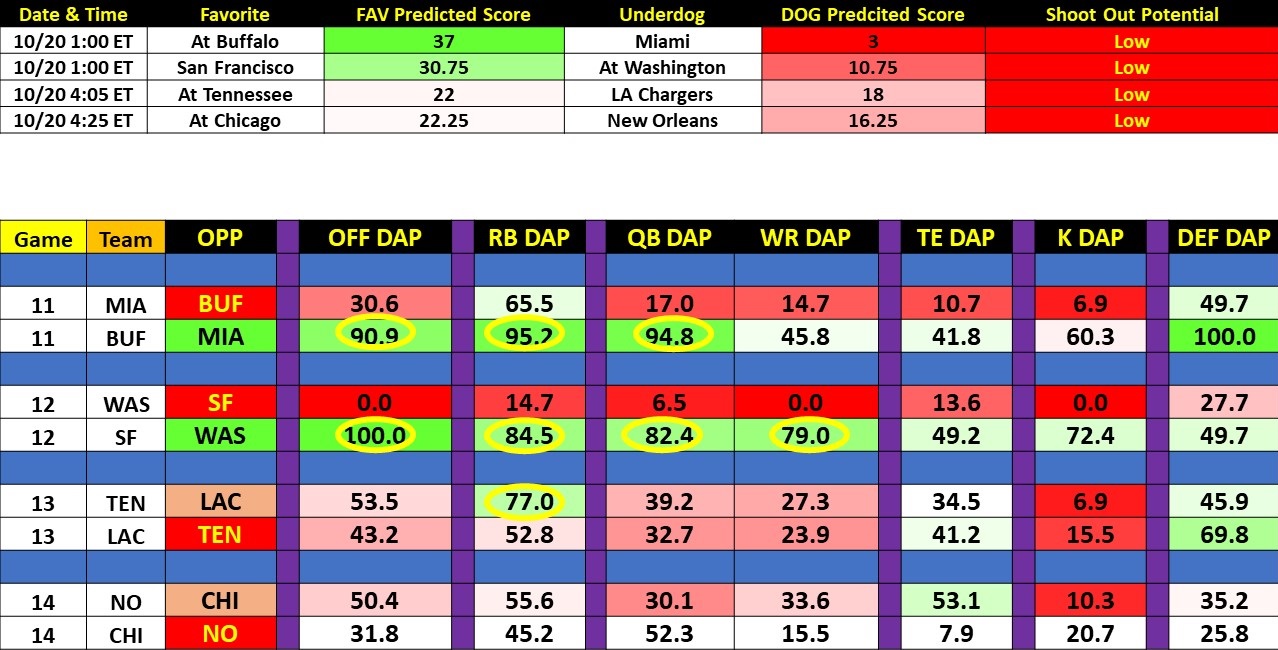 Red Zone Touchdowns can make or break your team’s week. I gathers the current 2019 season of RZ TDs and assigned each team a metric from highest-scoring teams (green) to low scoring teams (red).

Where these scores occur also is a critical aspect of weekly play and decisions. Does the team do well at home or away games? Red-Away/Green-Home/Yellow-Balanced

The following table and graph present these data and place them into a quick use format for setting lineups and DFS plays.

HOU and BUF are the tops in RZ TD scoring vs CIN and MIA as the worst 2 teams. These metrics highlight night nuggets to combine with DAPs/Vegas/My Rankings. Fantasy Football Week 7 Rankings

The green bars denote the Team’s level of RZ TDs while the red line marks each team’s Away/Home Bias. The pink line is the league average in Away/Home Bias

For example, SEA is Home Biased and the 3rd highest RZ TD scorers. SEA is at home this week! Move to SEA players. MIN is the 8th highest RZ scorer with a high Away/Home Bias. However, MIN is playing at DET. Caution! 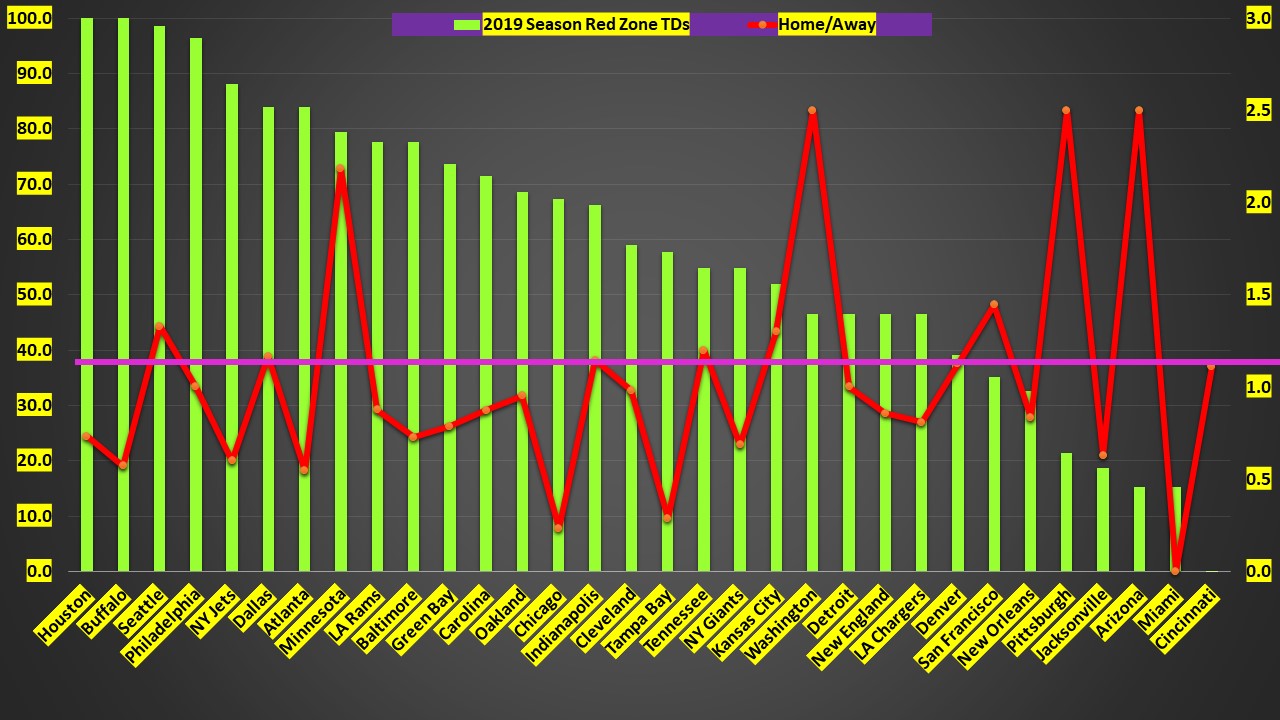 Remember high uncertainty only means the range of outcomes is large. Thus rankings of players that are highly uncertain should be treated with caution. It does not mean they are low ranked!

I use the uncertainty levels and determine the counts of players ranked as High, Mid, and Low uncertainty. The % of each type of uncertainty is then calculated as %H, A and L.  The High H/L metric implies a team with players of higher week 7 uncertainty whereas the lower metrics imply lower uncertainty exists. Red Teams are more uncertain this week!

I annotated for week 7 the teams 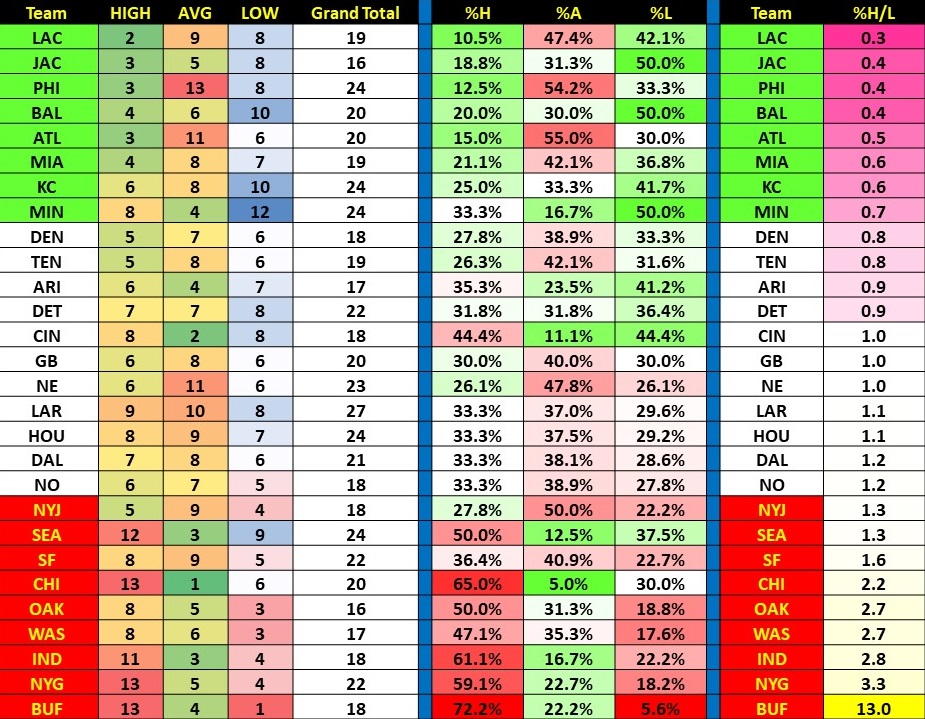 The Plot of Week 7 Uncertainty Teams 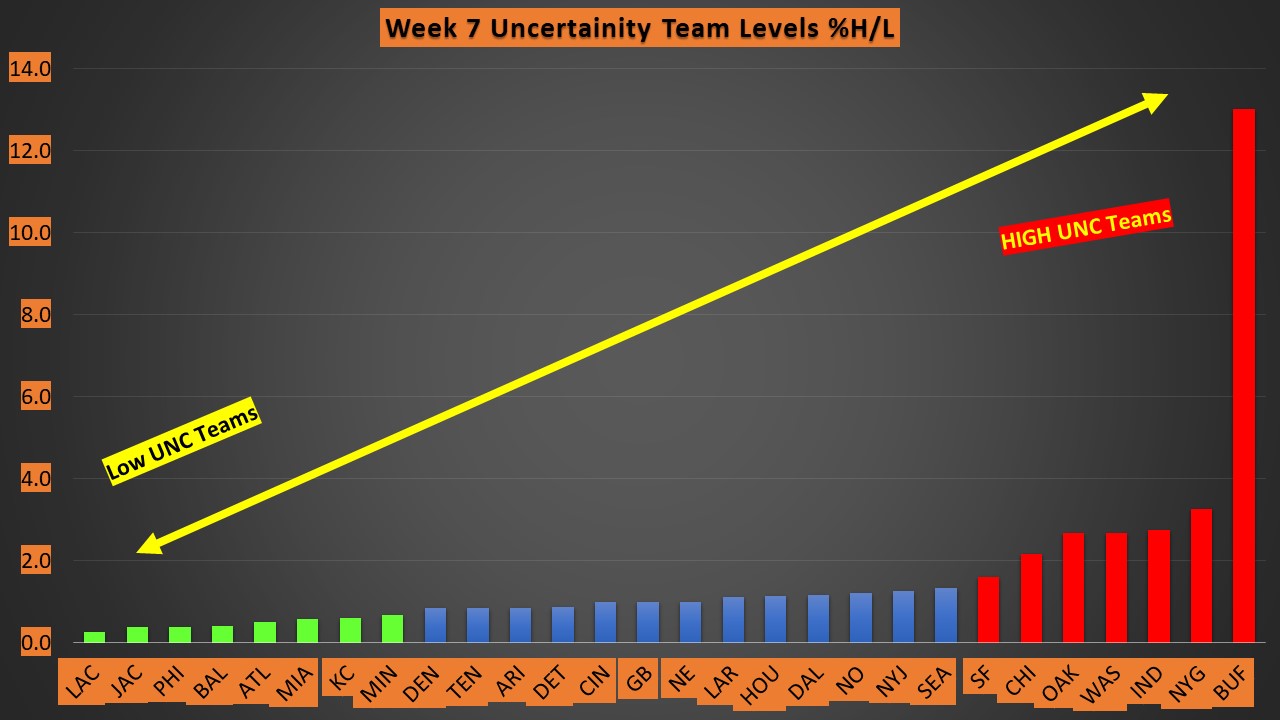 The ranges of my FSP rankings are High 100 (green/purple) to Low 0 (red/yellow). I averaged my FSP players rankings by teams and I sorted that Team Metric average from high to low below in the table. Fantasy Football Week 7 Rankings 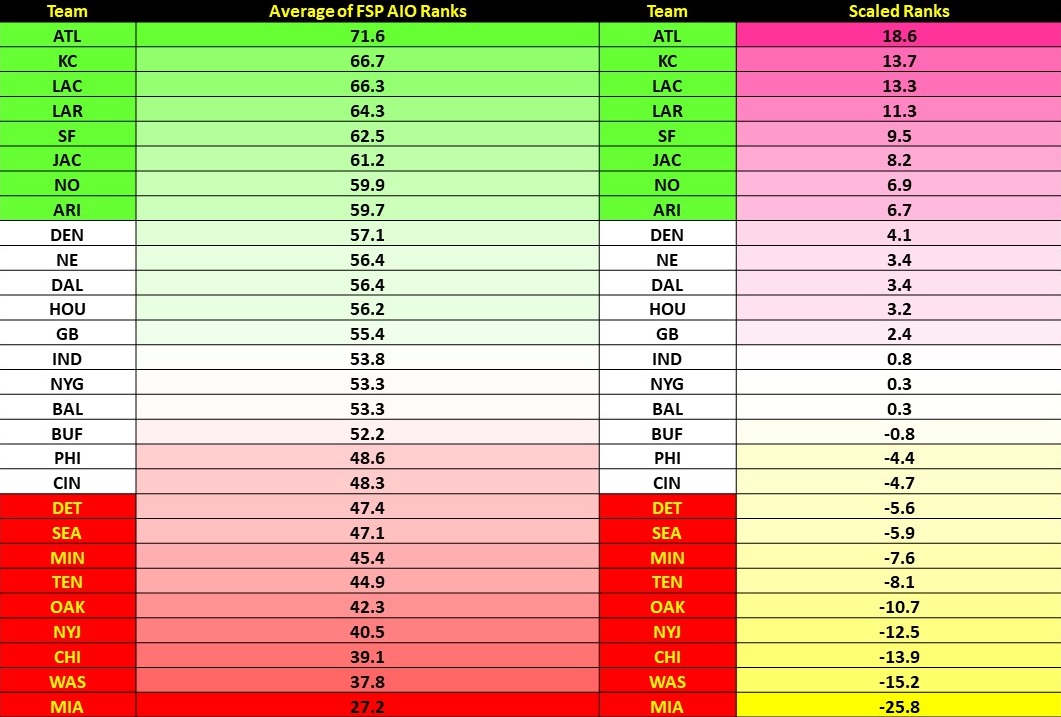 Scaled Rankings compares each team’s average week 7 FSP vs the league average. How much better is team 1 vs 2 this week? I would list all teams with an average scoring (above) and then these scaled ranked for comparison. Then I might combine the vegas and DAP metrics for a benchmark to further analyze.

Yes, I want your to work for your results. I want you to see my process so you can get better.

This graph presents a nice visual of all teams ranked for the level of uncertainty players. 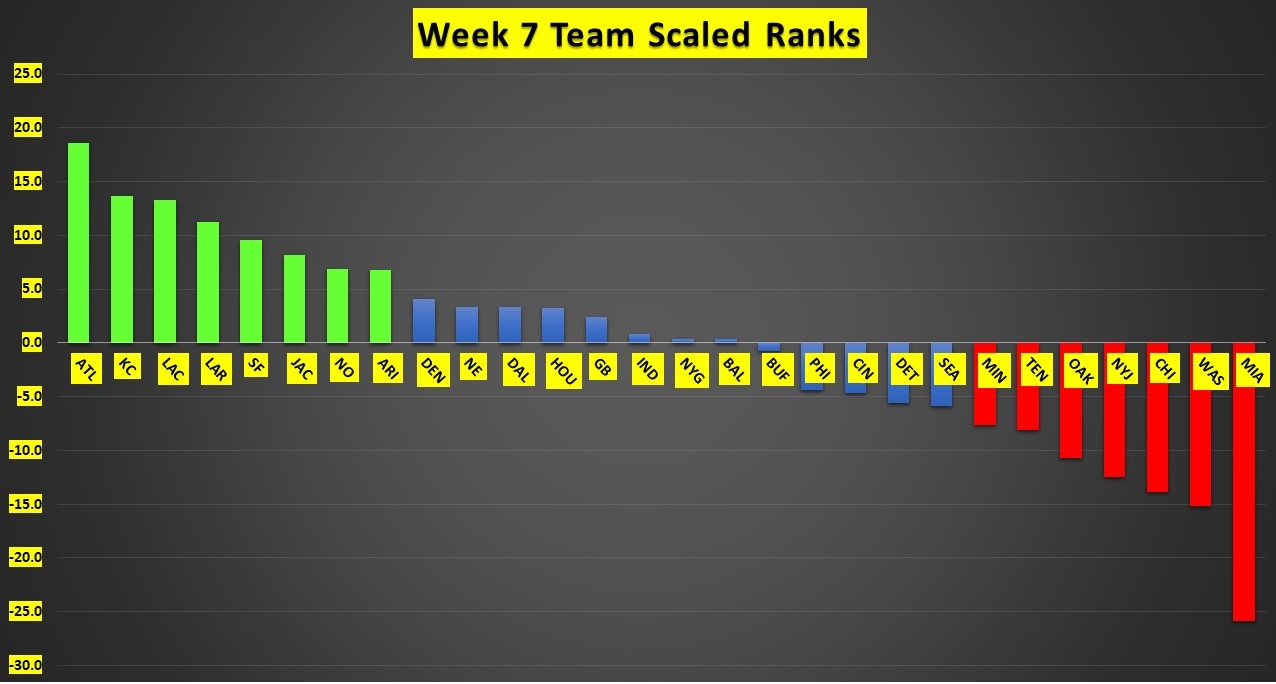 I present my week 7 FSP rankings with UNC levels for all positions. These average rankings (end column) are sorted High (purple) to Low (Yellow). I combine my PPR/HALF PPR/NonPPR rankings for an AIO experience. I have metrics that suggest it may be better for players to see a global ranking.

Additionally, I list the player’s rankings with their UNC level of High/Avg/Low. Combining all league types leads to different UNC levels. I show you the complete view for your analysis.

The DST/K/QB are the same under any scoring system and thus they have only one UNC level for week 7.

RB/TE/WR will and can have multiple views of week 7 FSP rankings and UNC levels. Use for deeper analysis. 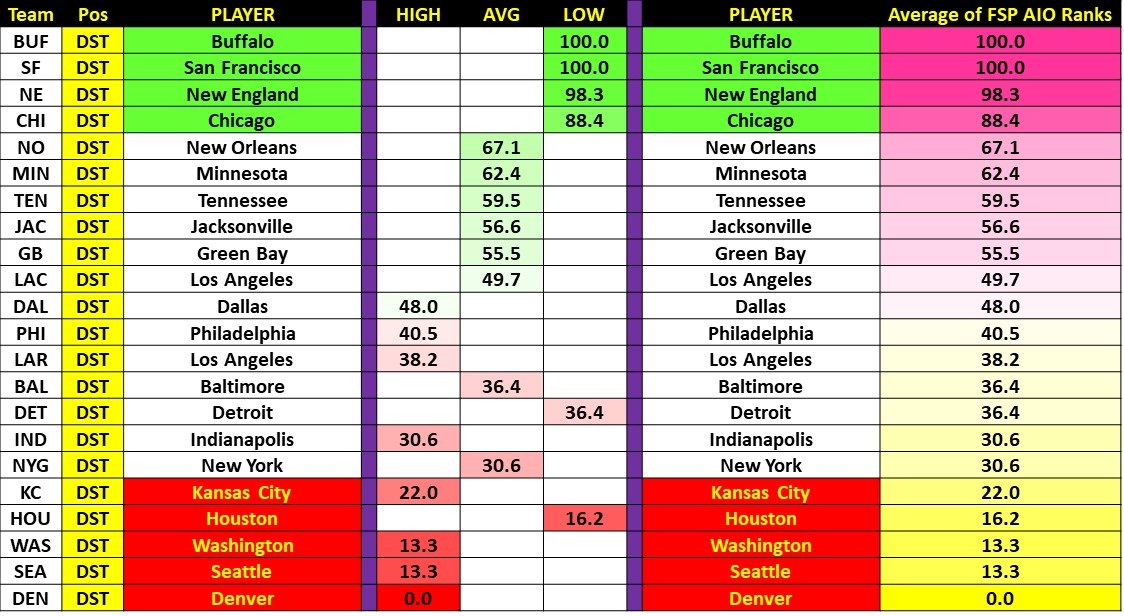 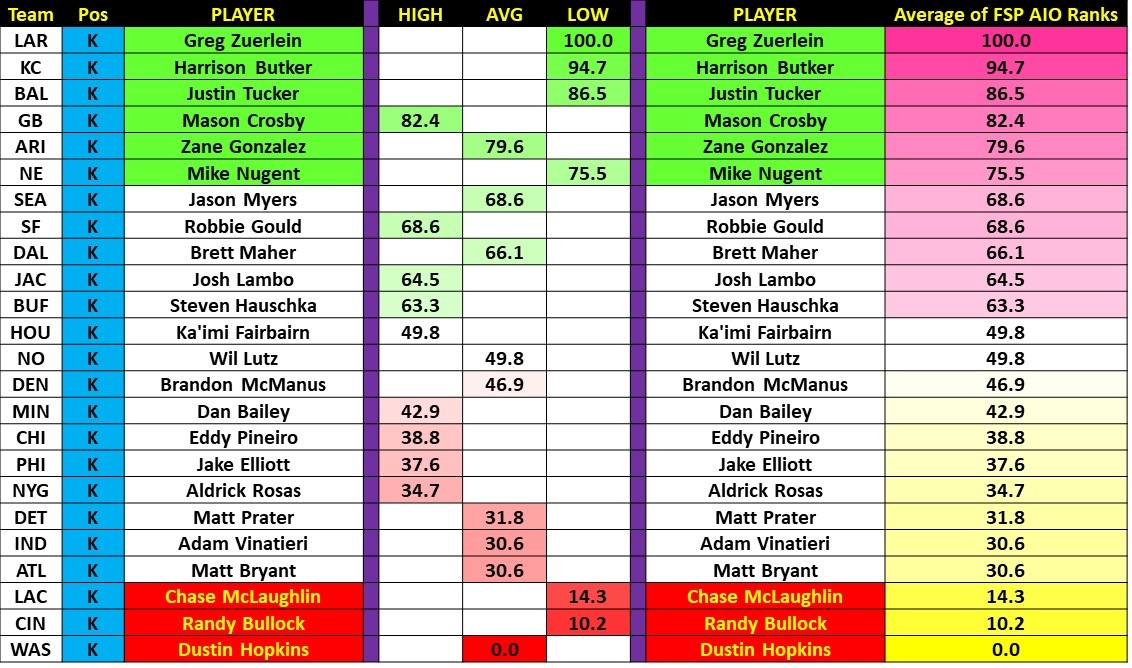 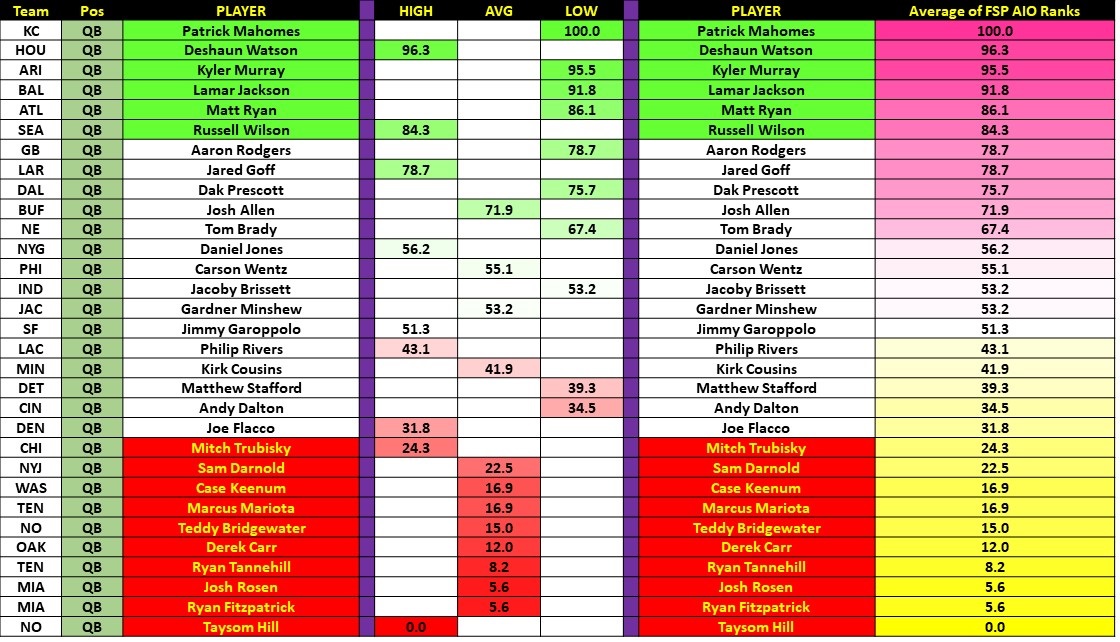 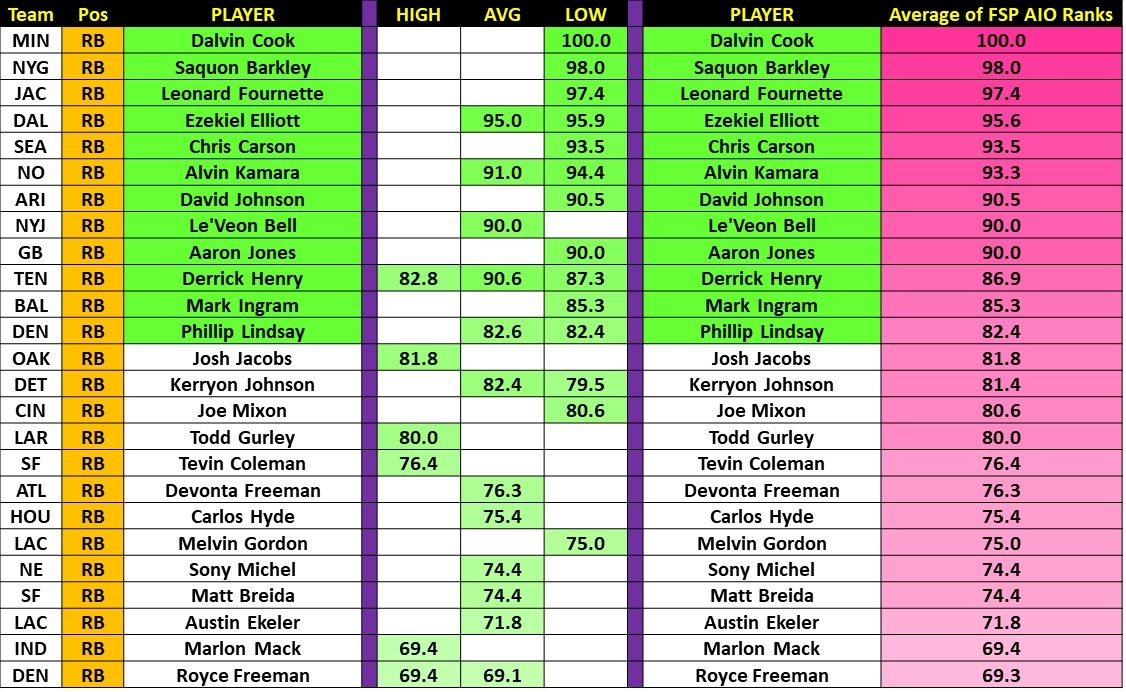 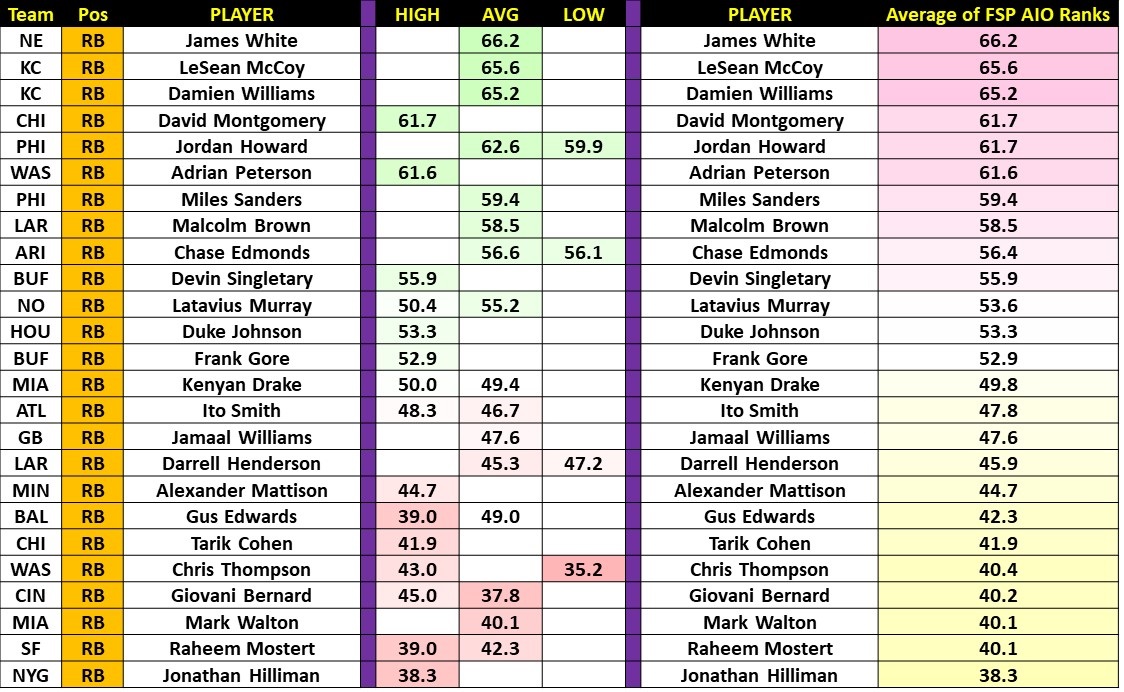 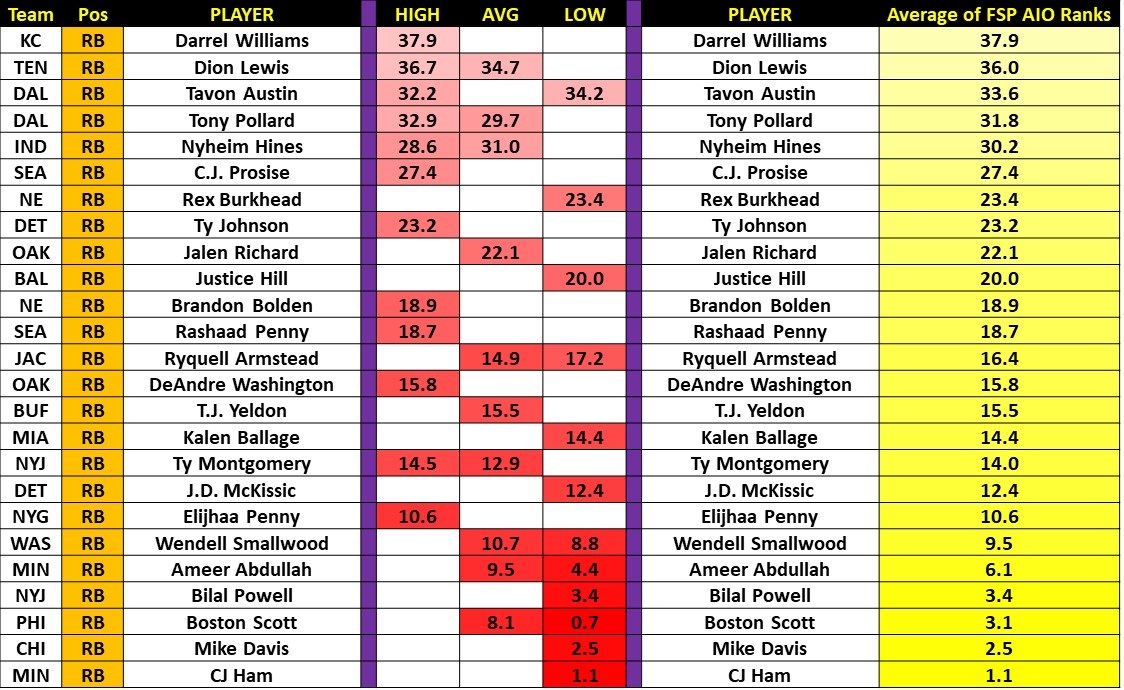 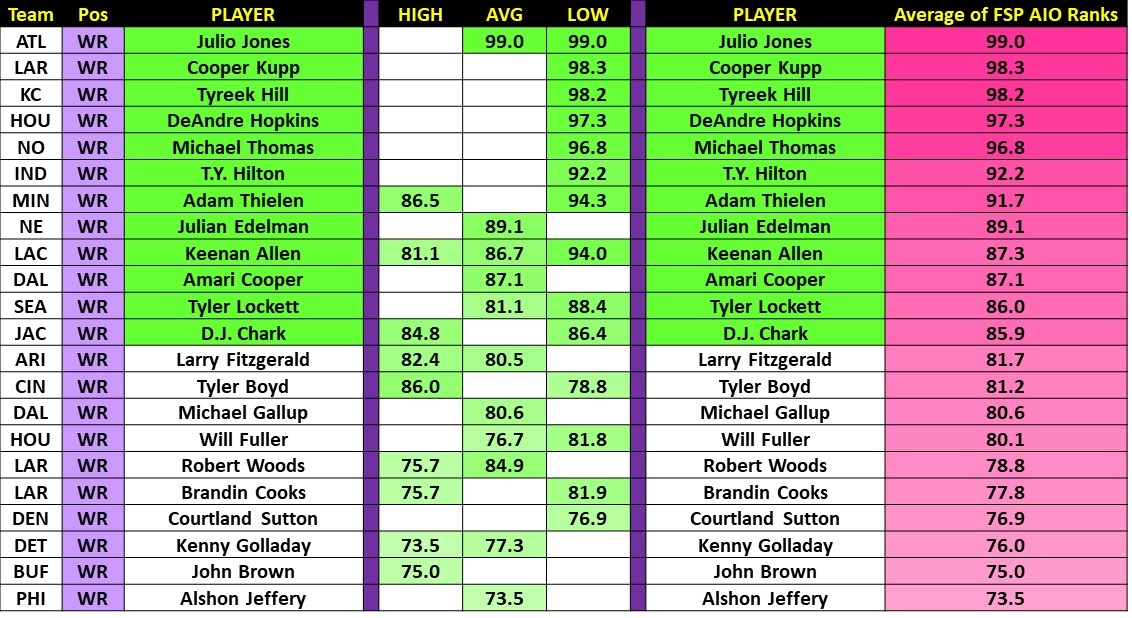 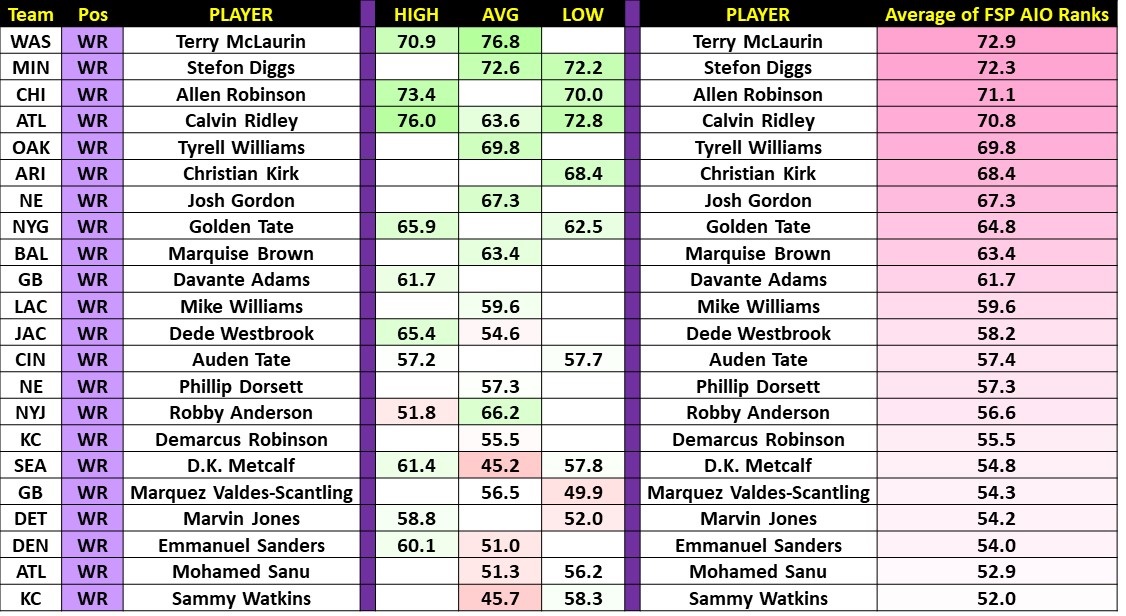 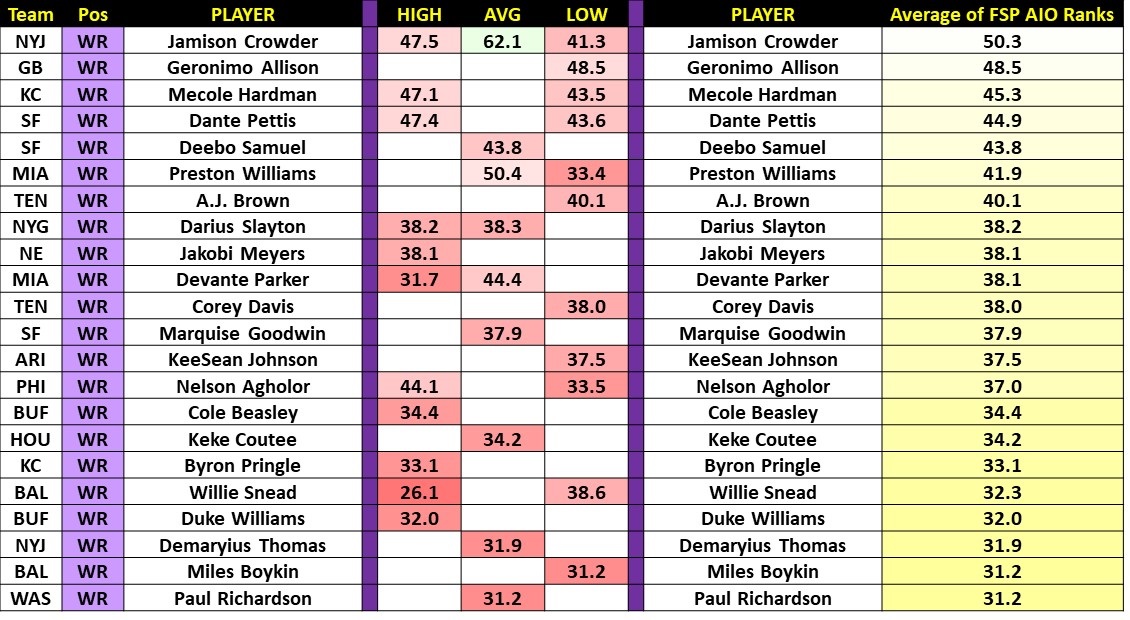 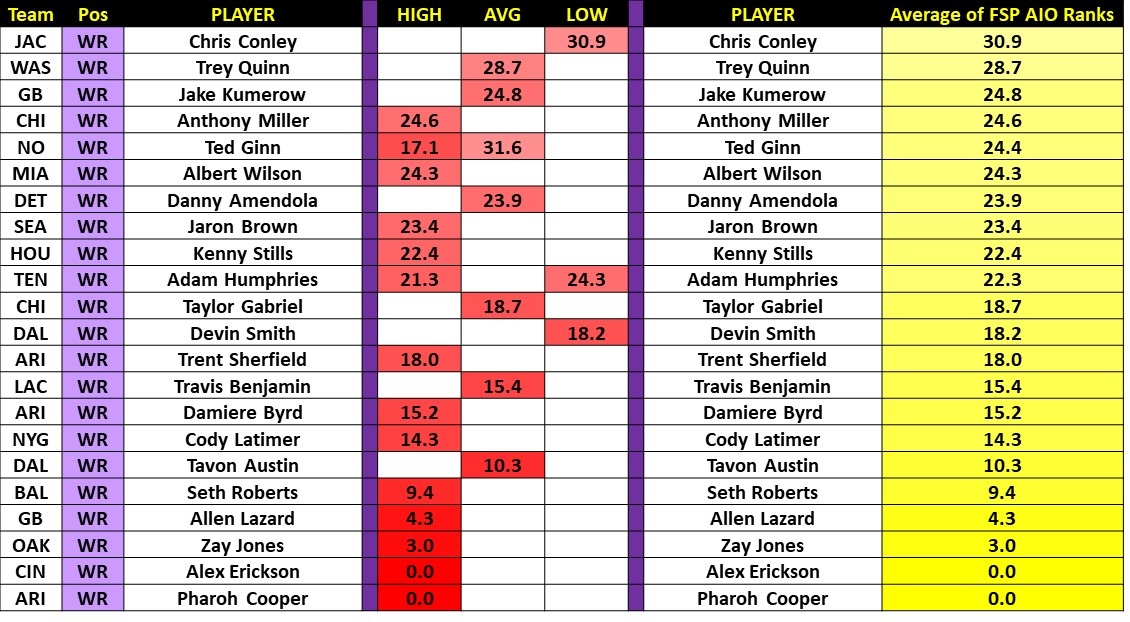 Players within their team environment. These Team level FSP rankings with UNC levels view spot pecking orders, usages within the positions, and team strengths and weaknesses.