Team Snaps Per Minute Week 10 Report is a data “Snapshot” of the post Week 10 team snaps per minute activities and speed of play.

Snaps Per Minute (SPM) Weeks 6 to 10 By Team, Seasonal Average of SPM, and Last 3 Game Averages for SPM.

The table has been presorted by the last 3 game average of SPM. I colorized the team names from highest speed teams (dark green such as BAL, NYG, NE etc), Above Average (light green), below average (light red) and slowest teams (dark red). 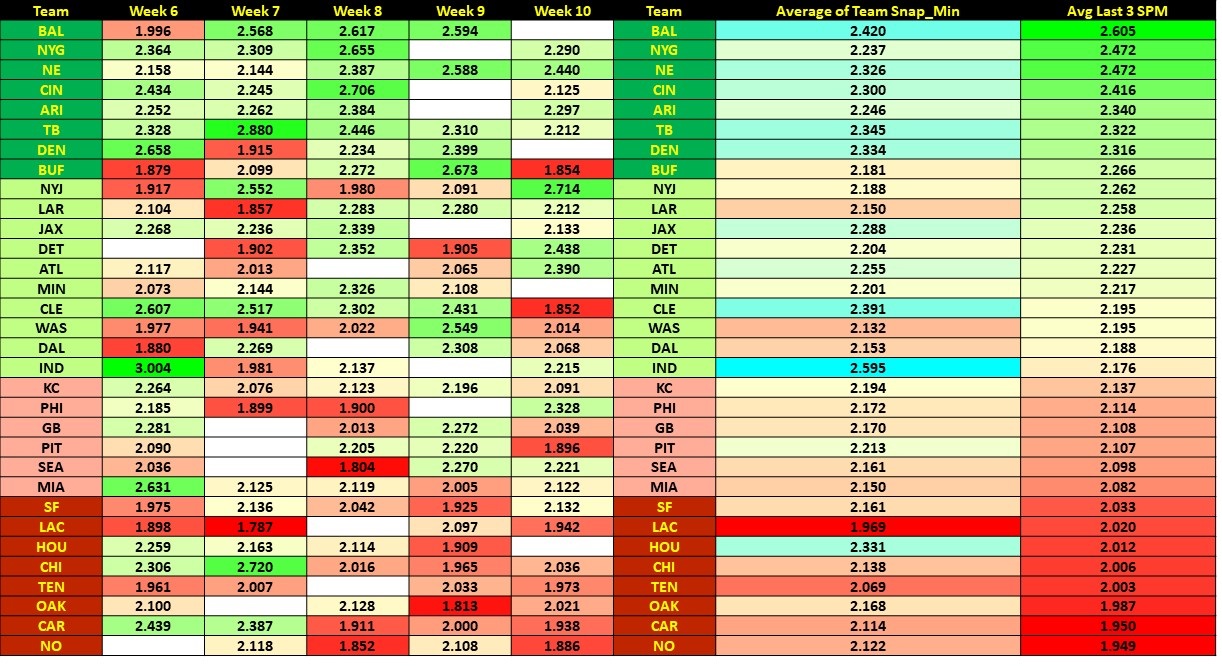 Does team speed mean anything?

This table assigns each team a type based on the DIFF metric of their last 3 game averages vs the earlier first 7 games. What teams have slowed down? or increased in speed (SPM)? I used red colorization for slowed down teams vs green for increased speed. See the DIFF Type Column.

Also to “see” the effects of speed, I sorted the table by the Teams’ Average Points scored in their last 3 games. I next assigned a Scoring Type moniker of Best Scoring, Above Average Scoring, Below Average Team scoring or Worst Team Scoring. (Blue to Red – last column)

Is 86% different than 29%? Yes! Unpublished data showed that these two team types (slowed vs increased in speed) were statistically different in points scored on the field by ANOVA and Tukey Testing. BAM! Slowed Team scored on average 26.5 points on the field vs sped-up teams only had 19.7 points average. That is about a TD difference! Can an extra TD help your fantasy team?

This a small sample of “secret” stats that most pundits will not have on hand. I have more of this information every year in my textbook on drafting at amazon kindle! The 2019 version should be out June 1, 2019!

I debated on showing this great stat find (First to find it!) but the readers who plow through the data now have a data bone to chew!

I present the data of Last 3 SPM by Team vs Last 3 game Averages in Points. The polynomial trend lines (Blue vs Yellow) show a clear reciprocal relationship of team speed and scoring success!

Teams that have slowed down are scoring more points. KEY Finding! 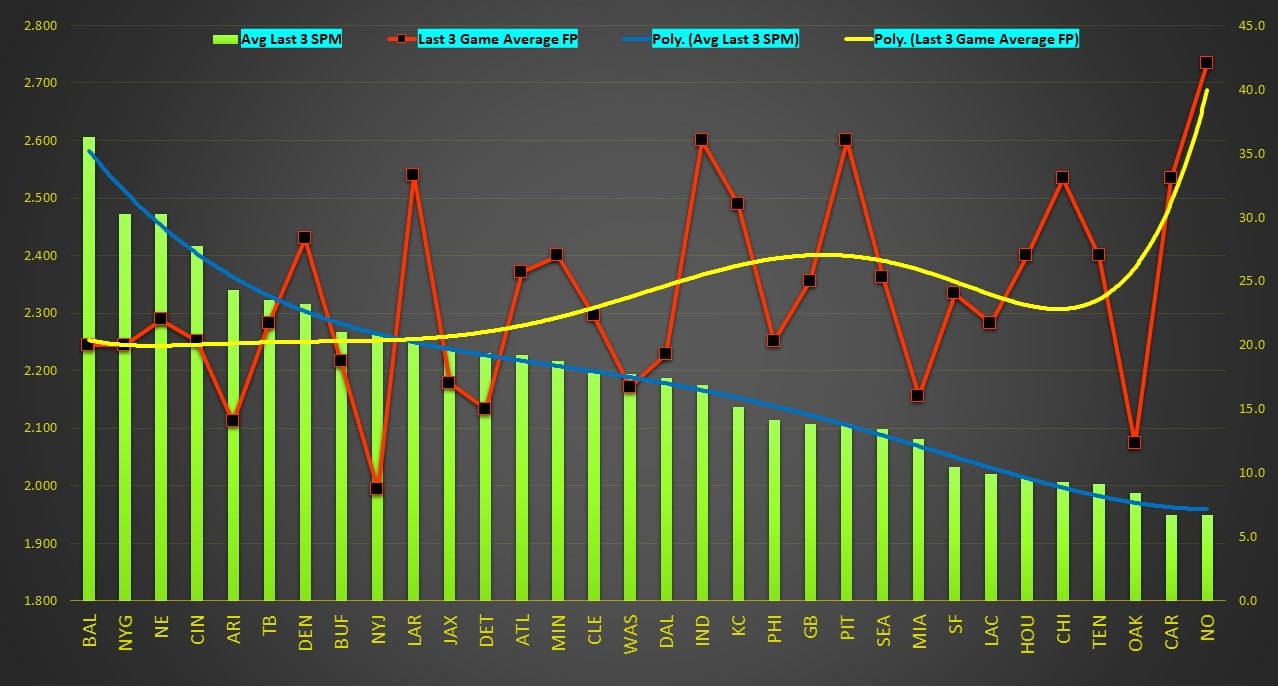 This is the data discussed above in sortable form.

For each position, I include a team prospective table and plotted a graph for visual emphasis.

Use these data to “see” what teams use a position and which one do not. You should in general trade to the high usage teams and exit the lower usage teams for each position

Players deeper in depth chart might have better value in high vs lower usage teams. Use the sortable table for each position to research that question.

The tables for each position include the same metrics and annotation as discussed above.

The focus is on Position with high SPM usage improving on high using teams!

There are too many hot-takes to write about. Scan the data for fun facts!

I use the data to emphasize seasonal and DFS lineups. Trades and Drop/Adds are modified by these data as well. Move to high usage and away for lower usages.

The table is colorized for emphasis and the graph gives you a visual confirmation of the trends in team positions!

Note the data is sortable by recent activity usage in the last 4 games vs first games. What teams are improving or declining? 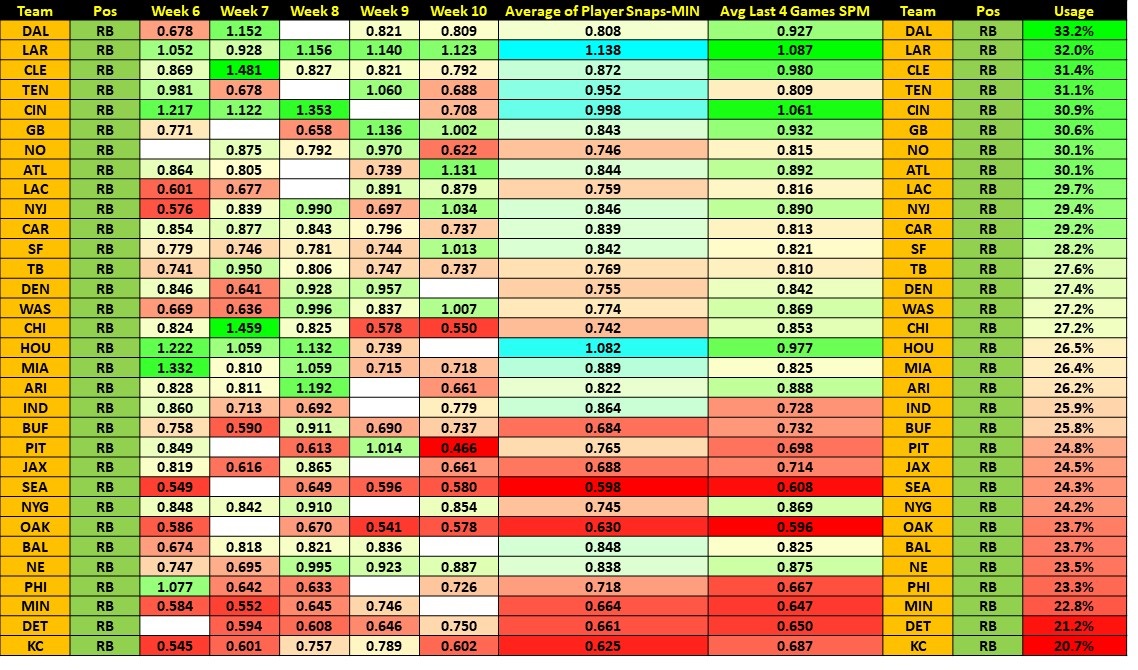 Landscape view of the RB data.

I highlighted 4 teams (red arrows) which had high usage over the season but have had recent declines in RB Usages. (BAL, CAR, LAR, and TEN). The opposing teams would be low seasonal RB usages that have increased recently. (NYG, KC, ARI, CHI, WAS, and DEN).

The pink dashed line is the average of the league seasonal usages.

NOTE- DAL, CLE, GB, NO, and CIN had all had high RB usages in the season and have recently increased more! 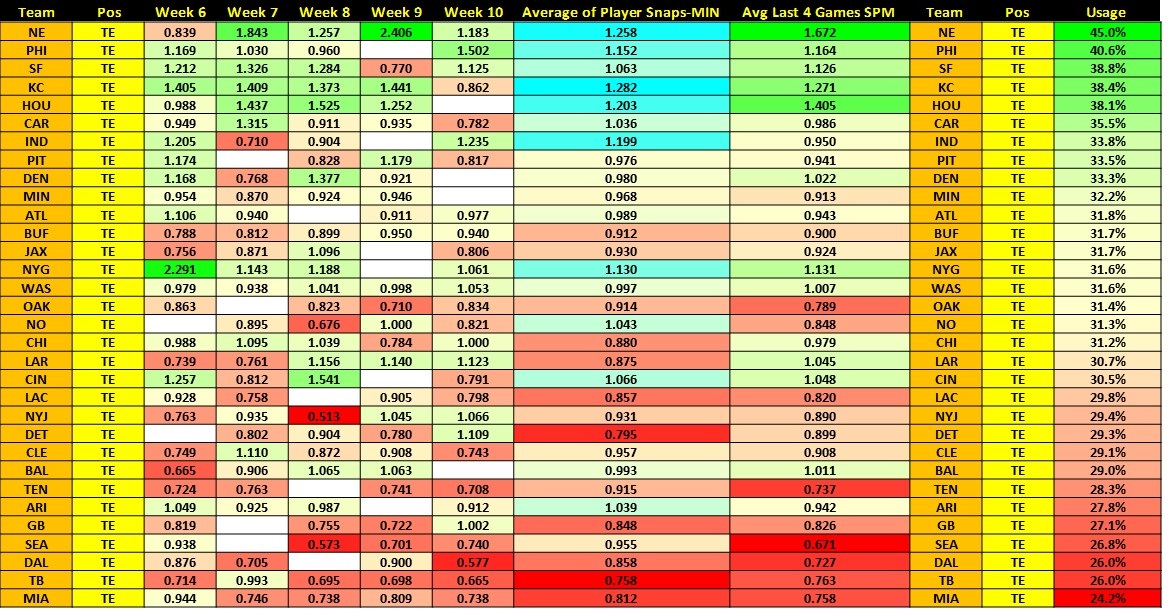 Landscape view of the TE data.

2 red arrow teams are CAR and IND. Watch this trend.

Landscape view of the WR data.

The red arrow teams are MIN, OAK, GB, and JAX. Watch this trend!

The table can be sorted and it in default using the NUM column gives each team by position and player sorted by SPM.

The focus is on players with high SPM share who are improving in SPM. Trade Targets etc.

These tables were sorted by DIFF Last 4 Games SPM Average.

Be concerned about the declining players (Red colorized)