Team Targets Per Minute Week 5 report looks at the use of weekly target numbers by Team and Position. This metric is useful in fantasy football especially in PPR scoring formats where receptions count.  The tables/graphs below provide target data for the running back, wide receiver, and tight end positions.

Targets Weeks 1 to 5 By Team

This figure below ranks team by the raw number of targets from weeks 1 to 5. This data does not deal with byes. It is a simple metric to establish a view of the league.

The top targeting teams are IND, BAL, MIN, PIT, GB, and JAX. I would predict these teams have deeper depth chart player who can gather your team fantasy points. I would use these metrics as a beginning of my analysis.

The bottom teams are ARI, CAR, CHI, WAS, MIA, SEA, TEN and BUF. These would have players that are not so useful especially in PPR leagues. I suggest focus on the WR1 and maybe WR2 only. Few if any WR3 or deeper are going to be significant.

The graph presents a visible landscape of the league with the league average shown (green dashed line). Note the levels of targets. IND is so above the league! I picked up several deeper WRs from IND this week. Watch if Doyle was dropped. Stash him!

BAL and MIN are the next tiers. (Trade for Players in high target teams!) 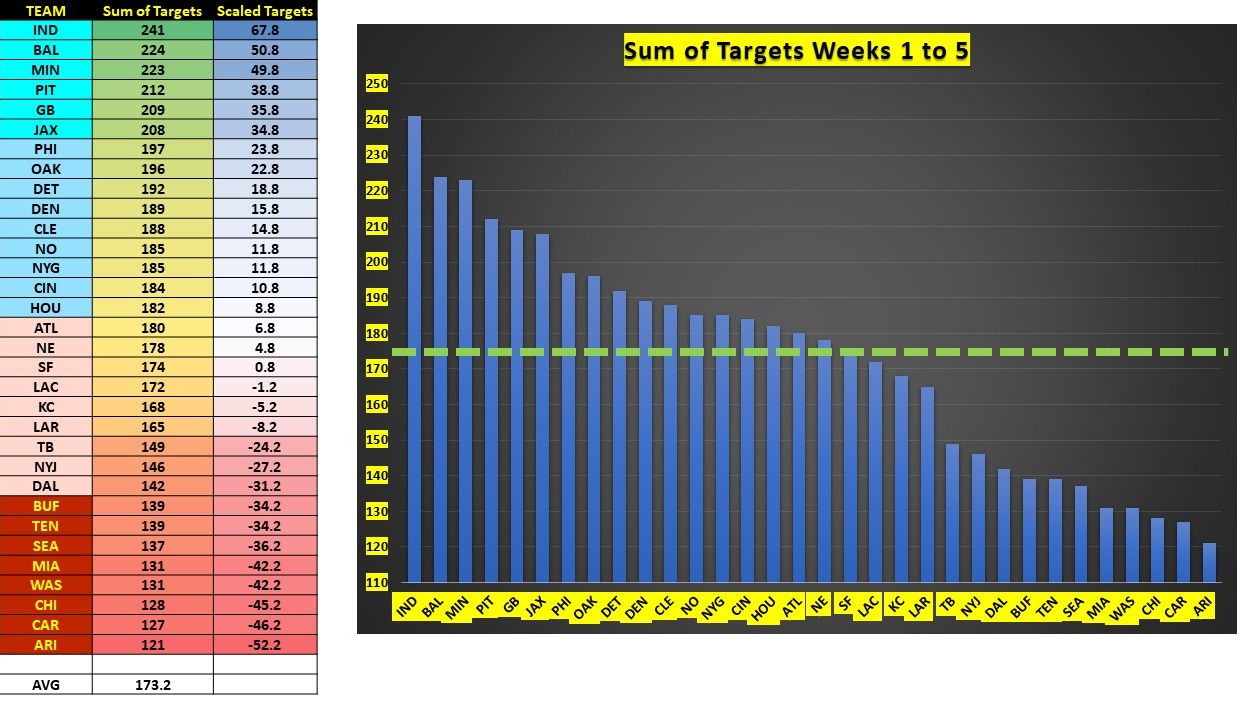 These sortable tables give the following:

The table focuses on the Usages of the RB from High (Green color) to Low Usage (Red). It is now time to move your deadwood players either vis trading or add/drops.

The top preferred teams for RBs usages are NE, NO, LAC, WAS, ARI, CAR, OAK, and SF. I am stashing handcuff players from these teams is possible. Be prepared. (Bibbs WAS, Richard OAK, Morris SF, Edmonds ARI etc).

The lower RB using teams are TB, KC, HOU, PIT, CLE, NYJ, and ATL. Be much more cautious on RBs from these teams. 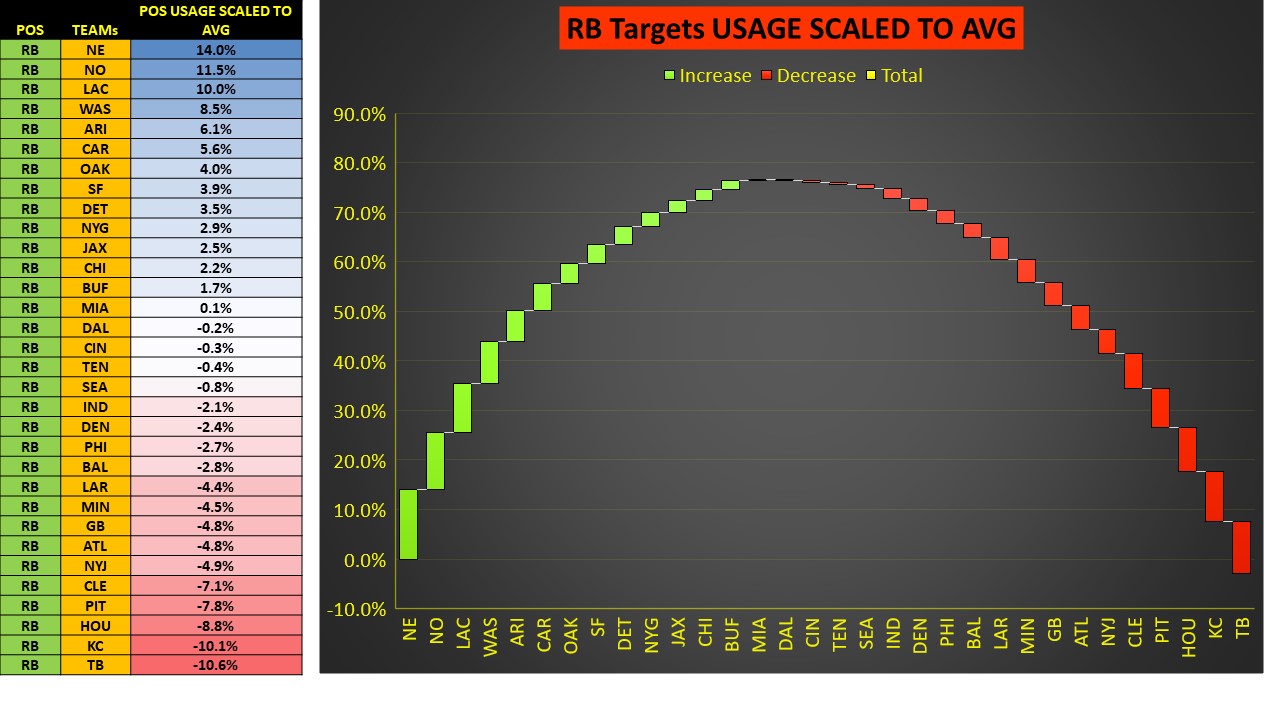 The table focuses on the Usages of the TE from High (Green color) to Low Usage (Red). It is now time to move your deadwood players either vis trading or add/drops.

The TE usages are highest are PHI, KC, IND, OAK, SEA, CLE, SF, BAL, and WAS. I focus to add TEs from these teams. Key handcuff TEs as well may be found.

TEs from DET, LAR, MIA, TEN, CAR (Olsen back!), LAC and NYG are underused! I suggest moving away from these players. 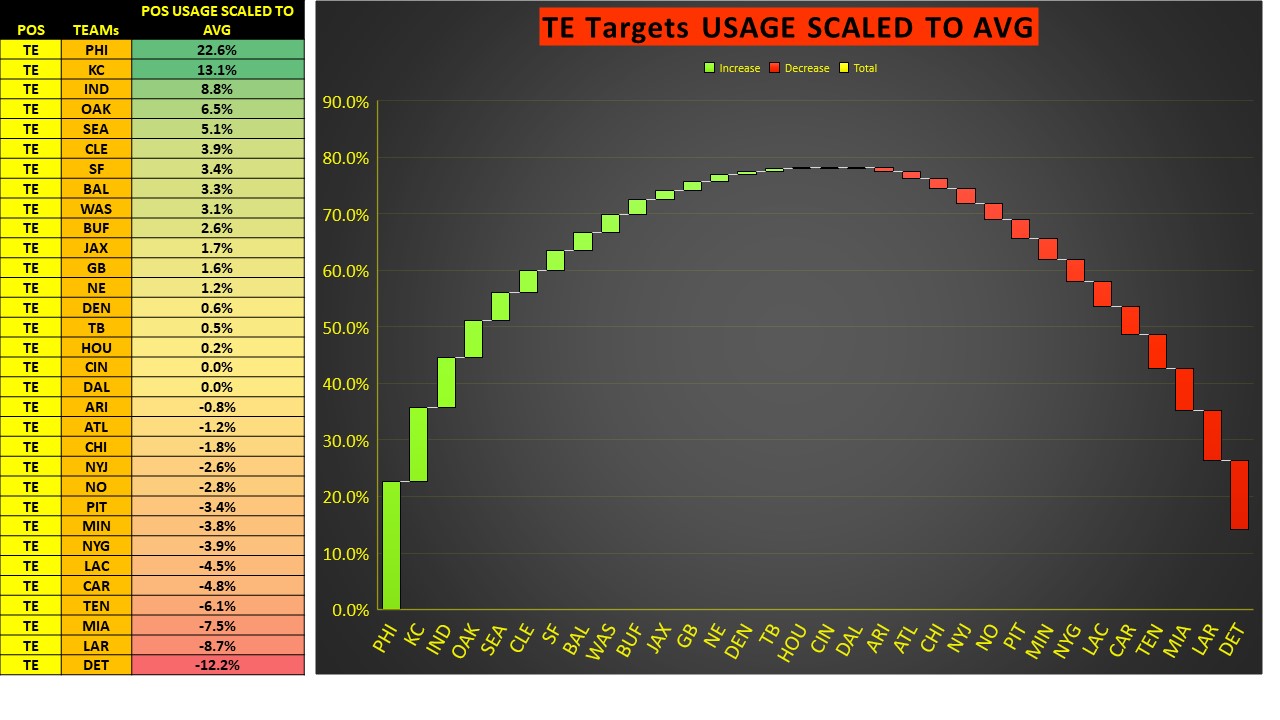 The table focuses on the Usages of the WR from High (Green color) to Low Usage (Red). It is now time to move your deadwood players either vis trading or add/drops. 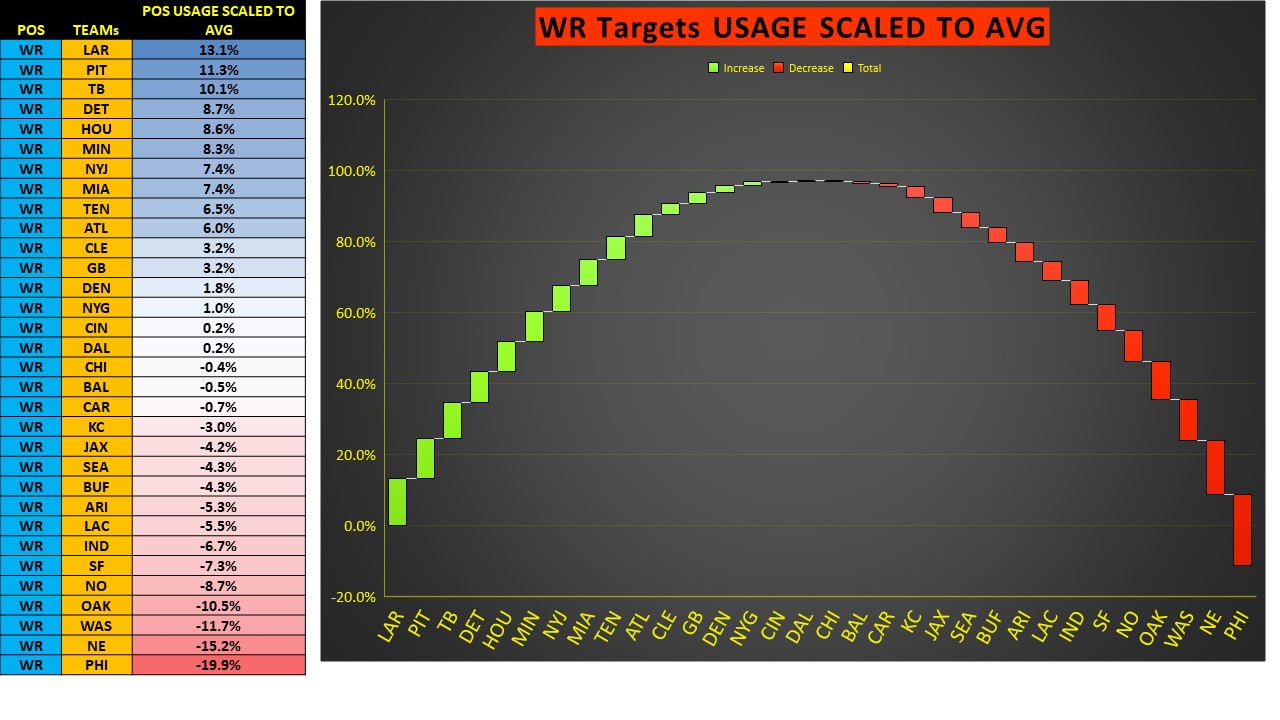 I have developed a new metric called Targeting Speed Ranking. This ranking incorporated usages over a minute of Team offensive possession. It captures the team speed with positional usages. Teams that heavily use a position and target that position fast will have a high Target Speed Ranking.

Spot the bargains! See the team focus figures after these sortable tables.

These tables highlight what I believe are key metrics for each team. Use for trades, drop/adds and lineups. The XX green symbol is my mark for a key team metric.

I want to use CAR RBs vs TB!   CIN WRs vs CAR WRs etc. Find and compare players on your team. I declare this week as trim the deadwood. Use these metrics as part of your pruning session!