RB Attempts and Touches Week 4 report focuses on the RB position. Given the importance of both Rushing Attempts and Receptions in PPR league this metrics should prove useful.

I also use a DIFF metric to pull out the Receptions and the Rushing Attempts improvements in week 4. These 3 data points highlight each Team and Player balance of run vs pass as well as a level of weekly success.

As the season goes forward the database build and more solid team and player patterns can emerge.

The table below displays the week 1/2/3/4 based data on rushing attempts. Looking for biases in team rushing vs receptions in their RBs!

Teams were sorted by the highest to lowest of their 4 week average Rushing Attempts.

The bottom teams in red color are BUF, MIA, MIN, PIT, NO, and KC.

Bar Graph of the 4 Week Average of Rushing Atts.

A reference for a quick study before last DFS lineup checks or season long teams.

The top 3 teams all had poor DIFFs. Note the next wave and the 3 teams showing positive DIFFs. Some Bottom teams with improvements last week. 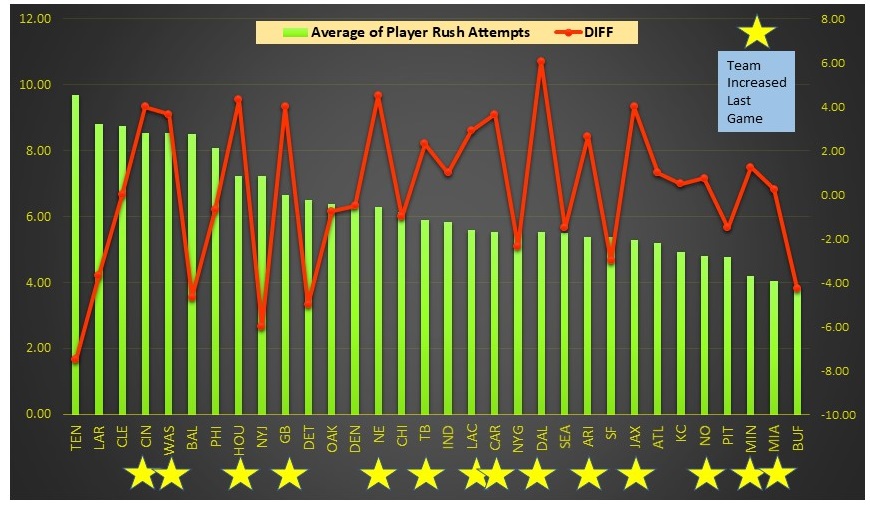 The data can be teased out to focus on rushing speed which teams are running rushing play the fastest. This can point to very nice RBs with high-speed of opportunities!

The Top Teams are TEN, CIN, CLE, LAR, WAS, BAL, NYJ, HOU and PHI. Thus watching to see how these team backfields are going with have a higher impact over the season.

Lots of questions. Henry vs Lewis (TEN), Mixon vs Geo (CIN), Hyde, Duke and Chubb (CLE), WAS (Peterson vs Thompson), BAL (Collins vs Allen), NYJ (Powell vs Crow), PHI (Ajayi vs all). HOU is seeing Blue coming on vs Miller and Foreman in the wings (Foreman stash now). LAR Gurley show.

Critical Teams to trade and acquire for big points! Monitor all these teams!

Please see the obvious team tiers. I will track this metric going forward. For example, NO should see an increase as Ingram is back. Will Bell come back to PIT if so they would move forward. MIN needs Cook back!

I would shy away for the bottom teams in RBs and emphasize the RBs in the top teams on average with no other data to use. It’s a good tiebreaker. 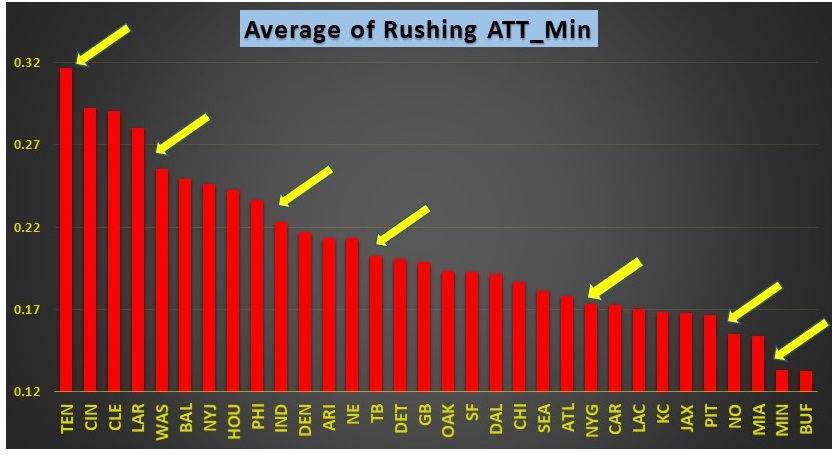 I also use a ratio metric of Touches (ATTs plus Receptions) vs Attempts. This ratio is scored should that players significantly above 1.3 are pass based RBs vs below are more rushers. Note Riddick and Richard are the 2 extreme RBs who strictly catch passes. Ratios of 4.8 and 3.15!

FYI note for research purpose that many of the top RBs are rushers or balanced!

In order to catch a broad view of RBs, I turn to Average Touches Per Minute to “see” all RB activity and its speed. RBs that are active and fast will have more opportunity to collect us Fantasy Points.

Below is a complete series of RBs sorted by their Touches Per Minute and their current Ranking. Elliot is number one! Gurley and Mixon are 2 and 3. Note Mixon is quietly being fantastic and is a trade target. Note the data is a 4-week average. Also, there are some highly ranked RB preseasonally that are buried in the rankings. Trade away but probably not going to get a lot. Wait till an extreme game and sell high!

Each team and their RBs are shown below and ranked by their scaled ranking! The weekly Touches per Minute are color-coded high to low (blue to red) and the players are colorized based on their rankings as shown in the tables above.