Sunday Above Average Games Analysis will include:

I have constructed these data charts below to maximize your visual view of the entire game landscape. Use thoughtfully. My philosophy is less is more? I will hit the highlights but will not give you the same old tired pundit driven opinions.

How to Read Game Scripts and Defense Against the Position (DAP) Figures.

Use the Risk Discussion for a deeper understanding of player risk levels are shown below. See the Detail Game Risk and Ranking Data for each team and player following the game scripts and DAP data. 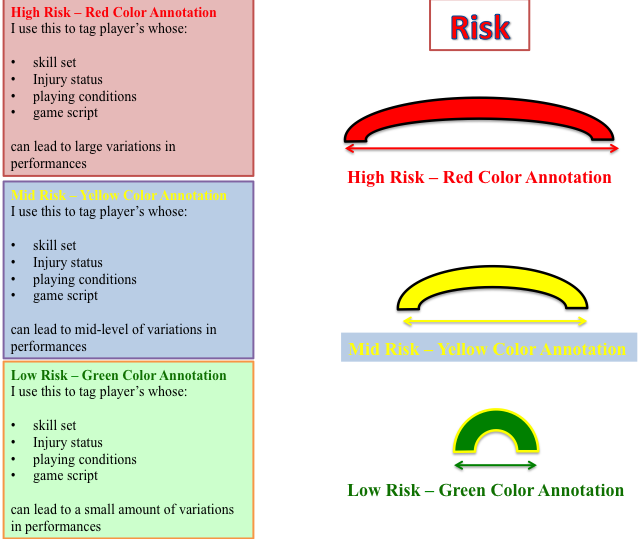 Min is predicted to crush the SF team. The SF Defense is easy! Scoring from Min all day long! DFS goodness in here!

Cousins get a sweet matchup to debut his MIN show! He faces a weak 22 QB DAP! Scores (3X) or more but he is ranked high risk 66. Cousins may need a game or two to get the MIN team altogether. Hence my high-risk designation. His WRs get a nice 42 DAP and RBs get 15 DAP but the TEs face 61 TE DAP.

The game script does seem to point to heavy RB usage. I have Cook is low risk 80. That can be his floor if the SF can’t keep up! Murray could get a score in short red zone situations. Cook is a weaker DFS cash game and stronger tournament play.

I think Diggs has the least risk in here vs an easy SF 42 WR DAP. I rank him a solid low risk 92 vs Thielen at mid risk 91. Very close tandem. Great best ball pair but who goes off this week? Both should and could but Diggs is more a cash game DFS play vs Thielen tournament play.

The TE Rudolph has the toughest SF DAP of 61 but that is slightly tough. He should collect a score plus catches. Low risk 86 tournament DFS play.

K and Def are viable in lineups and DFS.

Jimmy G gets a tough away game to start the season going against an 88 ranked MIN Defense. They should be able to mine his mistakes to crush the 49ners!

Jimmy G vs a 108.6 QB DAP. Oh my goodness! If he can chew his leg out of this trap then he can run the table for the 49ners! Mid risk 35 ranked QB this week but that might be generous!

His WRs will get a slight break vs 76 WR DAP but that is still rough! Goodwin Low risk 68 ranked and Garcon at mid risk 70. A lower ranked tandem with Goodwin collects more of the scraps the MIN Defense allows. I would pass in DFS

The two “new” RBs are going to be a Low ranked RBBC this week. They face Berserker Vikings defense of 108 DAP. 60 yards of the rushing total? Morris is a low risk 24 and Breida is a high risk 36! Tough. They must pass catch to give SF any chance. Pass in DFS.

Kittle having injury issues can be the check down guy and faces the above average 68 TE DAP. He is a mid risk 52 and does have a shot especially if the WRs are shut down. Expect to earn check down catches 8 maybe and a nice shot to score. Tournament DFS longshot only.

The K might collect FGs more than usual. Maybe a DFS Kicker play! SF defense will have it rough!

PIT is predicted to win this game by a score or so. Big Ben has a road game issue and it might be closer than thought. PIT goes into CLE facing a weak CLE defense ranked 32. Ben gets a new 19 QB DAP and scores (3X). He wins this game by the passing as Bell is not playing. I do have Ben at a high risk 66 due to road issues and no Bell.

Brown and JuJu will earn their keep as they do face a tough 78 WR DAP. That might limit these two but expect 2X scores anyway. Brown is low risk 100 and a cash DFS play but JuJu is a mid risk 80 and a tournament DFS play only.

Conner can surprise and reward drafters or DFS players as he gets a below average 47 RB DAP to face. The issue will be how good is he at pass catching. Using him in DFS cash vs tournament will depend on that answer but his price is so low that it might not matter as everyone is going to have him. Fade maybe is the play? High risk 61 ranked

The TE DAP is zero and a surprise from McDonald could occur. A good longshot tournament high risk vs reward play! High risk 50 ranked player.

CLE has a whole new suite of player and the risk levels are overall higher in week 1. They face a tough defense from PIT of 70. Note impossible but will limit some CLE action!

Taylor the QB has to deal with an above average 55. That actually is not too tough near average. Taylor should score 3X and keep this game close by his rushing. I rank him high risk 48 as he is getting his first real start with CLE.

What loses the game for CLE is the PIT WR DAP of 54 because Taylor rushes a lot under pressure. He will need to settle down and use Landry as check-down control the ball WR and hit Gordon to the house for the X-factor. Gordon to me is the fulcrum for CLE. If he collects scores then CLE upsets. I have them at Mid Risk 84 and 77 respectively. I suggest Gordon as tournament DFS play. Fade Landry except in cash games.

Duke Johnson and Hyde are a balanced RBBC and together can get 2X scores vis rushing and passing. These RBs face a 54 RB DAP. I ranked them low risk 40 for Duke and Mid Risk 52 for Hyde. Hard to figure for DFS. Fade them unless you “know” which goes off!

The TE faces a tough 85 TE DAP and Njoku while talented is still a mid risk 64 ranked as his chemistry with Taylor is unknown. A gamble for DFS tournaments only.

TEN is favorite in this away game. Both Teams have weak Defenses. 35 MIA vs 34 TEN. Very Similar ranked defenses. Thus the concept is TEN has a better suite of players.

Mariota the QB is mid risk ranked 57. He faces a weak 25 QB DAP from MIA. Note he can rush in a score as well. He should collect 3X scores if TEN needs passing in case MIA is able to keep up.

The TEN WRs are weaker than you might think. Davis and Matthews should see the targets but MIA has a stout WR DAP of 80. Davis is high risk 81 ranked and Matthews is low risk 61 ranked. The passing scores may come from TEs and RBs instead.  Fade DFS.

Mariota will connect with his TE Walker for 1 to 2X scores. Walker can have a blowout game vs an easy MIA 1.5 TE DAP. He is a solid DFS cash and tournament play. He is low risk and 87 ranked!

The RBs are a tandem and we have the which one goes off today routine. They fight into an MIA RB 19 DAP. Given the game script of TEN dominating, then Henry a mid risk 60 figures in the scoring. If MIA surprises then Lewis a mid risk 56 will collect the scores. To play either in DFS requires thinking about the probability of TEN crushing MIA and TEN letting MIA stick close. It’s a fade for me.

K should be ok and the TEN Defense feasts on MIA!

MIA gets Tannehill back and he gets a shot in here facing at home an easy TEN defense. He faces a 36 QB DAP and should keep MIA close. Multiple scores.

The WRs should have a 43 WR DAP and an easy time to collect. Stills should score even 2X. He is mid risk 70 ranked. The others are mid to high risk. Parker is healthy is a high risk 67 ranked, he might collect in here. Amendola is high risk and we will see if he replaces Landry!

The new TE faces a 30 DAP.  Gescki will have an opportunity to shine but remains a low ranked 36 mid risk TE for me. Maybe a lucky score?

Drake is the RB of note but Gore is still there. They both fight into a 43. The game script of TEN ahead does not favor the RBs. Drake is a high risk 74 in this game. Fade in DFS. Gore not ranked but could be a lucky red zone score. 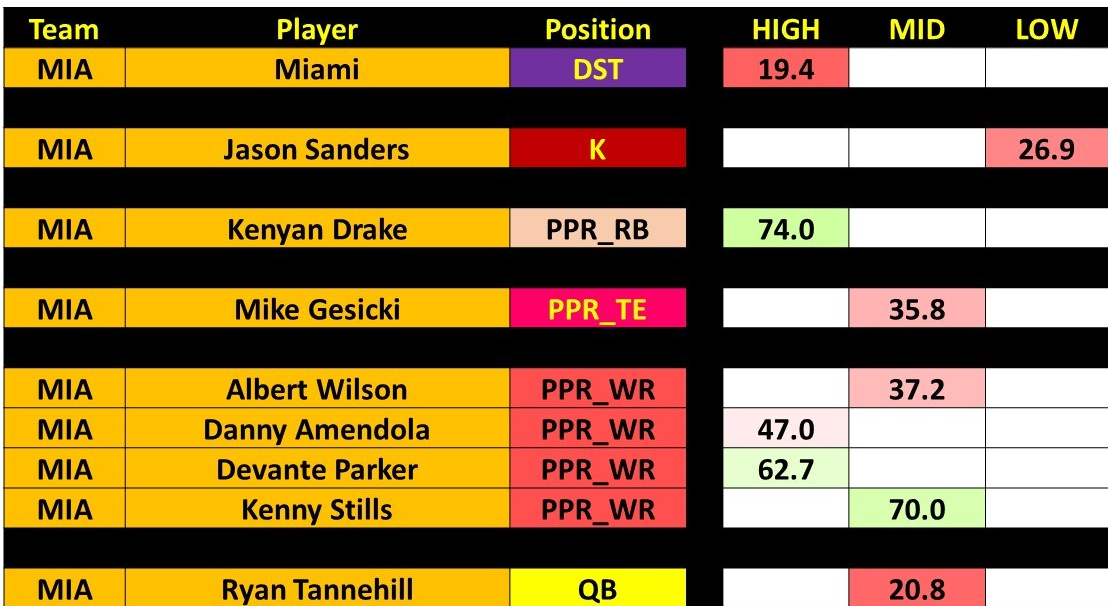 The defenses are very close and below average hence the above average game total.

ARI will have Bradford for a while and he will deliver scores. He faces a tough 66 QB DAP. That may mean David Johnson leads the scoring for ARI.

DJ faces an easy 22 RB DAP and he will collect a fist full of scores, catches, and yards. Solid DFS play under all condition but especially PPR.  He a low risk 97 ranked. Payday Johnson will have his cake and get to eat it too!

Fitzgerald faces a tough game vs 94 WAS WR DAP. He may collect less than usual but he will collect a score. Play in tournaments only though. I have him a mid risk high ranked 93. Looking to watch Kirk but if he is not able to do his business he could be a sly week 2 trade target if reactionaries give up too quickly. Test the waters and see.

Ricky Seal-Jones got streaky last year and was a top TE for a few times. He faces an easy 35 WAS TE DAP. He could be a longshot DFS play! Maybe a score or so. I have a high risk and 43 ranking. 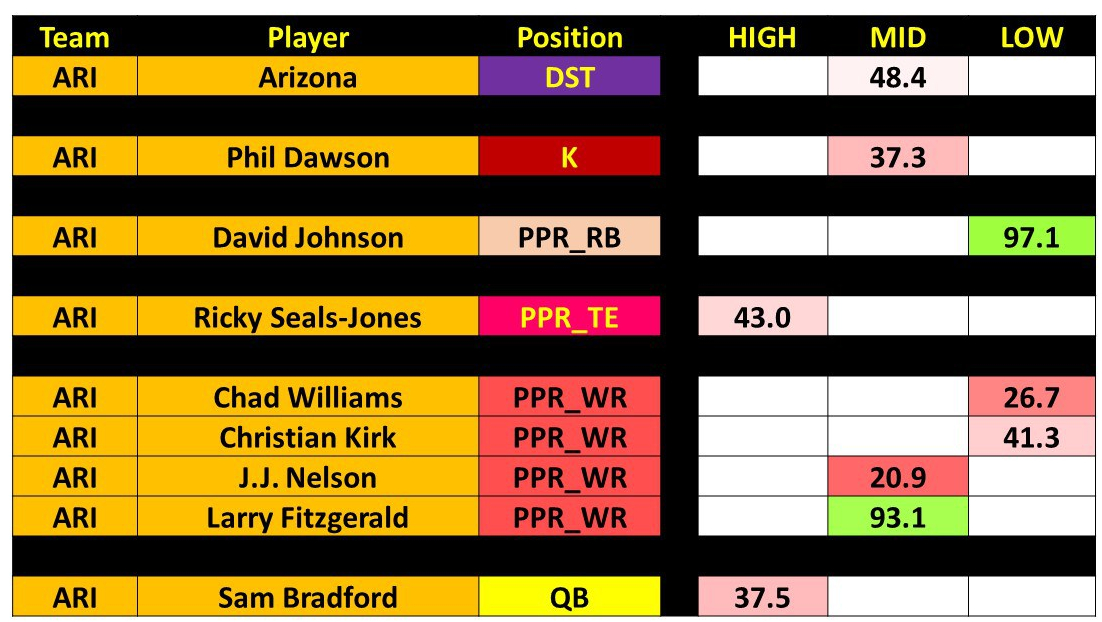 Which Alex Smith will show up for WAS. Last year’s Smith would be able to win this game. He is ranked at mid risk 46 but gets a nice 27 QB DAP. He should connect to his WRs all day as they face a weak 39 WR DAP.

Crowder should be a great PPR play at a low risk 75. He should catch plenty of balls and score. Solid DFS play.  Hard to figure Doctson or Richardson both are high risks and ranked near 50.

Reed the TE while healthy should score. He will face a tougher go vs a 67 TE DAP! He is a mid risk 83. The mid risk reflects the harder DAP from the WAS defense. I expect an average game from him and will play in tournaments only.

The Kicker has issues but the WAs Defense should collect its share of fantasy points from Bradford.