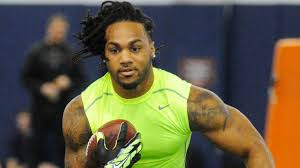 At 5’09”, 216-pounds, Player X has a short and squatty build with a natural leverage advantage. He runs decisively with good forward lean and determination. He was clocked at a respectable 4.53-seconds in the 40-yard dash but is quicker than he is fast, demonstrating the ability to make defenders miss to complement his deceptive power. Perhaps best of all, he’s proven his toughness and talent against elite talent, rushing for back-to-back 1,000 seasons against SEC competition. – Cbssports.com

The above assessment is taken from the website’s pre-draft evaluations for 2013 – yes, 2013.  The assessment is not an analysis of Auburn’s Tre Mason.  It is from one year ago and comes from the site’s breakdown of Vanderbilt’s Zac Stacy who was the 12th RB taken (No. 160 overall) in last year’s NFL draft.  As everyone knows, Stacy went on to emerge from the Rams’ running back-by-committee and rush for 973 yards – second only to Eddie Lacy among rookie backs.  Heading into Year 2, Stacy is a consensus Round 2 pick in start-up and re-draft leagues.

So, why are you reading about Stacy in a Mason-themed fantasy football rookie RB watch?  Let us compare the two: 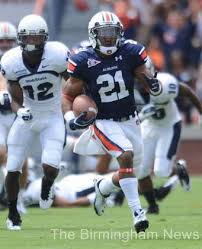 When Mason signed with Auburn in 2011, he was just as well-known to the Tiger faithful for being the son of a member of the hip-hop group De La Soul as he was for being an SEC-caliber running back (if you’re thirty-something or older, don’t tell me “Me, Myself and I” didn’t just pop into your head). [Editor’s Note: Why yes, yes it did] Rated by Rivals.com as the No. 14 RB in the country and the No. 199 overall prospect, Mason arrived on campus with somewhat modest fanfare.  Buried on the depth chart behind Freshman All-American Michael Dyer and speedster Onterrio McCalebb, playing time was limited.  Because of this, Mason turned his sights to special teams and scored on a 97 yard return in his collegiate debut.  In fact, Mason led the SEC in kickoff return average that season.  However, he only carried the ball 28 times for 161 yards.

Heading into the 2012 season (and with Dyer now out of the picture after being dismissed from the team) Mason looked to make his mark.  Once again, though, it appeared that he may have to yet again wait to be the man.  Incoming freshman Jovon Robinson (a current JUCO RB whom Dynasty owners will likely be salivating over in another year or two) stole the show the first two weeks of fall practice and was primed to make his mark as the next great SEC back.  At this point, Mason likely wondered if he was ever going to get the full-time job.  He continued to work as hard as ever, and before the season started, Robinson was ruled academically ineligible and left school.

The job was finally Mason’s.

How did he respond?  He managed 171 carries for 1,002 yards and 8 touchdowns despite the Tigers having arguably the worst offense in recent years in the SEC.  Mason ran hard; he ran fast; he ran determined.  He turned the corner and was primed for a strong junior season in 2013.  No one – not even Mason – could imagine just how strong it was going to be. 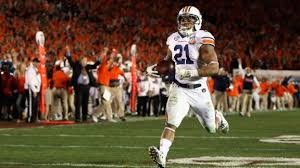 Games against Washington State, Arkansas State and Mississippi State showed that Auburn would be a good (but not great) team in 2013 and Mason would be a steady (if not spectacular) back for the Tigers.  While the team started 3-0, Mason only carried the ball 15, 14 and 10 times in the victories while sharing time with two others.  Then there was that one Saturday night in Baton Rouge.  Despite falling behind 21-0, Auburn stuck with its ground game – even late into the second half.  While the Tigers dropped their one and only regular season game, Mason took control of the  job that night by rushing 26 times for 132 yards and two scores.

By midseason, Mason, QB Nick Marshall, and the Auburn running game were firing on all cylinders.  The junior RB mauled Texas A&M to the tune of 27 carries for 178 yards and the game-winning score.  He ran over, through, and past top ranked Alabama for a line of 29-164-1.  Missouri entered the SEC Championship Game allowing only 119 yards per game.  Mason sprinted his way into Heisman contention that afternoon by rushing for 304 yards on 46 attempts.  He scored 4 touchdowns, and Auburn was on its way to the national championship game – due in large part to Mason’s special talents as well as his leadership on and off the field.

Although he rushed for nearly 200 yards against Florida State and scored the go-ahead touchdown with just over a minute to play, the Seminoles scored late to win the title.  As if the football world needed more proof of his competitiveness, Mason apologized to Auburn fans, saying he felt like he had let them down by not finishing.  Not finishing, huh?  Mason finished the year as the SEC Player of the Year and a Heisman Trophy finalist.  Auburn finished the year as the top rushing team in the country – the first time an SEC team had ever done so.  Mason finished the year with 317 carries for 1,816 yards and 23 touchdowns.  While Auburn may not have finished with a championship to cap off the most remarkable turnaround in college football history, Mason finished his college career as an all-time great — showing toughness, perseverance, and incredible leadership.

So, back to that Zac Stacy comparison.  Yes, they have similar builds, resumes, and strengths.  Can Mason have similar – or more – success in his rookie year than Stacy did?  I believe that he can, however, we all know that so much of that depends on opportunity.  Who will draft Mason?

Will it be a team that has an established starter and is looking to add a back for depth and possibly start 2-3 years down the road (perhaps Philadelphia or Baltimore)?

Will it be a team that has limited options and will give Mason every opportunity to earn the starting job in his rookie year (the Titans and the Giants have been mentioned as possibilities)?

As we have seen with Stacy and many others, if given the right situation Mason can absolutely be a first year contributor at a minimum.  Former Chargers great LaDainian Tomlinson (a 5’9”ish 215 pound’ish RB himself) has stated on several occasions how impressed he is with Mason and asserts that Mason has all the tools to be an all-around back in the league.  Other backs that Mason has drawn comparisons to include Ray Rice and Frank Gore.  The three have similar builds and like those rushers, Mason has very quick feet and exceptional balance.

By now, everyone reading this article has likely heard that Mason may require minor wrist surgery before OTAs and training camp.  While Mason has denied the need for surgery, the issue may raise a red flag for certain teams.  Rotoworld’s Evan Silva has stated that the injury may drop Mason from the 2nd round to the 3rd.  He may also slide a bit because teams are not convinced of his pass-catching or blitz-pick up abilities. (Keep in mind that just because he did not showcase those traits for a run-dominated Auburn offense, it does not mean that he cannot do those things). If that is indeed the case – and you are a Mason fan (as I obviously am) – that may end up working to your advantage.  You are now likely to get better value for him than you were two months ago when he was being touted as the Top RB in the 2014 class ahead of the likes of Sankey and Hyde.

Mason is exactly the same player that he was at that time – a hardworking and skilled playmaker that is ready to finish.