Congratulations guys, you’re made it to the finals! This week I’ll try and go into a little more detail into my recommendations and the thought processes behind them. Go get that championship! 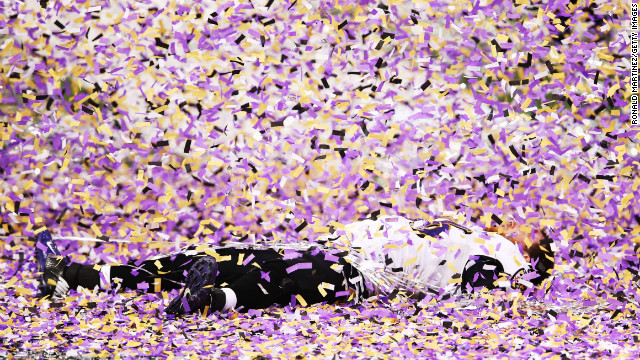 The weather could be a factor in this one, and at present (Saturday morning) there is a 60% chance of rain. If this game sees a lot of rain it is going to seriously reduce the number of passing plays of course, but both defences are very strong v the run also. If the rain does come, expect a low scoring contest.

Carson Palmer is listed as Questionable but he is expected to start. The issue here (regardless of weather) is the matchup. Last time he faced Seattle he scored just 3.82 points, and that was in good weather in his home stadium. I can project him such a low score but Palmer must be started at your own risk. Nobody can really throw on that Seattle Defence, they allow 9.75 points to opposing QBs with a TD rate of 0.9. When the Seahawks are at home it gets worse for QBs. The combined stats for QBs throwing at Seattle at Qwest Field this season is: 136/236-1293-4-12. I would say Carson is a poor start this week, even if the weather holds off. I rank Palmer as a QB18-22 this week.

Rashard Mendenhall should be good to go this week as he practised fully on Friday. His matchup again is one that’s hard to look at. I have little confidence in Mendenhall anyway as his value comes with his carry numbers rather than actual ability. Last time he faced the Seahawks a goal line TD bumped up his score, but aside from that score he ran 12 times for 19 yards. I can see Mendenhall getting plenty of carries (18+) this week, but I’m not confident he can get much out of it. I think he can get between 4 and 8 points, barring a score. Andre Ellington has come off two strong weeks and has over 100 receiving yards in that period. If you’re in a PPR league I like Ellington as a low end flex, despite the matchup. Be warned though, Ellington will not get the carries his talent deserves, likely under 14 carries even if the game is a ground war.

Larry Fitzgerald is recovering from a concussion and will probably play if he passes the final test of the concussion protocol. However, suiting up against Richard Sherman is going to kill Fitz’s value. I think he can catch 3 or 4 passes, but unless he gets on the end of a bomb or makes a defender miss I can’t see him scoring over 6 points in standard leagues. Michael Floyd is an exciting WR prospect but this week he’s going to be in for a rough ride. If he can repeat his 5 catch 58 yards performance against Seattle earlier in the season then he’s had a good game. Beware of the weather having an even more adverse effect in this one.

Floyd and Fitz have been great late in this season, but this matchup kills their value in championship week – photo from blog.sidelinesapp.com

Rob Housler missed out last week and is 50/50 to start this week. Housler is unlikely owned in many championship teams, but if you do own him I’d look at your waiver wire before putting him in this week.

Cardinals D/ST are a strong unit and will get you a top 10 score this week in a matchup that will be won on the defensive side of the ball.

Russell Wilson has dipped slightly over the last 2 weeks, throwing just 1 TD in each game. If the weather holds off then he should be able to master the Cardinals secondary which offer him a middling matchup this week. Wilson relies on his TDs to boost up his fantasy score (he has just 2 300+ passing yard games this season), and his running ability also helps him in that endeavour. I think Wilson can get 15-18 points this week, as his numerous weapons in the passing game make it hard to gameplan against them.

Marshawn Lynch is the 4th highest scoring fantasy RB and has the tied most (11) rushing TDs in the league. He’s up against the hardest defence to run on in the NFL. Do you bench him in your championship game? No. Don’t get too cute. Treat this game like any other and start your best team from your roster. I rank Lynch at RB8-10 this week. Last time he faced the Cards he got 16.4 points and he can do that again.

Percy Harvin is officially out, making Doug Baldwin and Golden Tate the top receiving options in Seattle. Neither are elite WRs in fantasy but both offer solid value on a consistent basis. Baldwin has just the 33rd most points at WR (770-5) with 107.6pts, and Tate sits just below at 37th (735-4) with 100.40 points. Either of these guys would be a safe WR3 for between 7 and 14 points this week. If you’re picking between the pair I’d go for Baldwin as Tate has been out of form lately (no 7+ fantasy game in last 4 outings). Jermaine Kearse could have sleeper value, but he relies too much on TDs to be a championship starter unless you’re desperate, and he hasn’t scored a TD since week 10 against the Falcons. Zach Miller has great upside against a defence that simply cannot stop any TE. – photo from www.zimbio.com

Seahawks D/ST should be started in all leagues.

This will be the final game at Candlestick Park for the 49ers, who need a win to keep hold of their 5th seed in the playoff hunt. Harbaugh will want to get ahead early to relieve any pressure on his team and that will mean a gameplan built around Kaepernick and his arm.

Colin Kaepernick will face the fifth worst defence v QBs this week in the form of Atlanta. Whilst he didn’t quite hit the lofty targets I set him last week, he connected with Michael Crabtree a lot more, as the defence tried to cover up Anquan Boldin. Kaepernick’s new weapons returning has lead to him increasing his passing yards per game (222) and his TD rate (2.0), this should continue against the Falcons who gave Russell Wilson over 20 fantasy points. I would recommend starting Kaepernick as a QB8-10 with QB5 upside. I expect him to get around the 20 point mark this week.

Frank Gore is up against the 8th worst defence against RBs, and although I think he may get a slightly reduced workload as the 49ers will look to air it out against the Falcons, if he gets 16 carries (usually a minimum for Gore unless the 49ers slip behind early) he should get over the 80 yard mark. Gore should be good for a RB10-16 performance this week, and is a safe RB1 choice.

Michael Crabtree caught his first TD of his short season last week against the Bucs and I can only see him getting better. The most important thing about Crabtree is that he has looked almost 100% in his cuts and hasn’t shied away from tackles. I think Crabtree is well and truly back and the only thing holding him back is his other receivers demanding attention. Crabtree should top 100 yards this week against one of the worst secondaries in the NFL. He is a borderline WR1 in my opinion. Anquan Boldin has seen 9 targets per game with Crabtree and Manningham back in the fold, and this should stay at a steady rate as Kaepernick obviously trusts Boldin to make those critical catches. Boldin is better in PPR in my opinion, but he is a viable non-PPR flex option in 12 team leagues also. 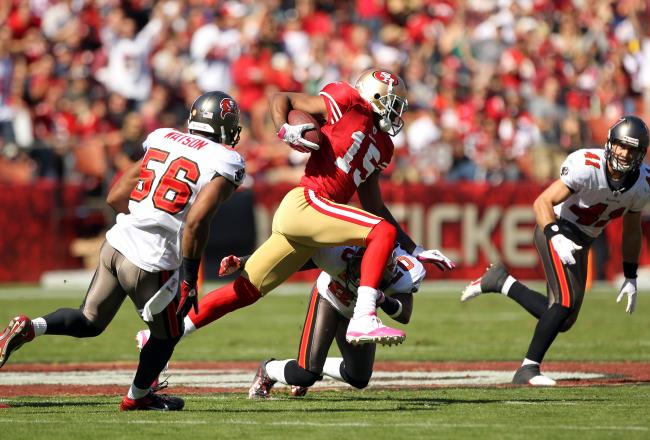 Crabtree got his first TD of the year against the Bucs in his 3rd game back after injury. – photo from bleacherreport.com

Vernon Davis has 5 consecutive TDs at the moment and in that period his lowest score is 8.10 and his highest 14.20. He has shown incredible consistency and has made the most of the space that the returning weapons in the 49ers passing game have brought him. There is no way you should bench Davis this week, unless you have Jimmy Graham. Even then it’s a close run thing.

49ers D/ST are facing a team in disarray, despite their win last week. A top 8 performance beckons in my opinion.

Kellen Clemens is facing a reasonable matchup, and if you’re in a 12 team league he is likely not owned. I can recommend you starting him, but only if you are seriously stretched at QB. One thing going for Clemons is that the Bucs are efficient at stopping the run, so the Rams are likely going to need to pass the ball a lot more (he is averaging just 26.8 passes per game in his 7 full starts this season). If Clemons can get the ball out quickly then he could get you around 12-14 points. But he should only be started in deep leagues where your other options are Chad Henne and Josh McCown.

Zac Stacy will be up against a Defence that allows just 14.71 points to opposing RBs, but he has shown that he can run against even the toughest NFL defences (134 yards v SEA, 133 yards v NO, 72 yards v SF). If Stacy can find the end zone it will be a bonus, but right now I like Stacy to get 75 yards and maybe a 0.75 chance of a TD. Stacy has the 7th most carries (73) in the NFL over the last 4 games, and he does tend to get a lot of looks in the offence. This gives him a high floor every week. 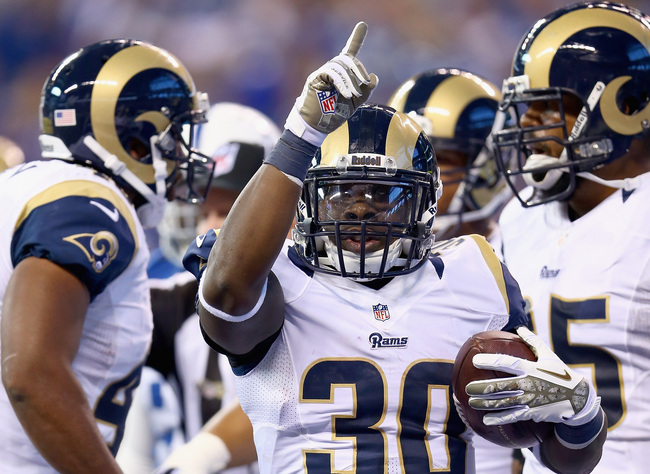 Stacy has been a superb waiver pick up this year, no defence has stopped him yet. – photo from bleacherreport.com

I honestly cannot tell you with any confidence that any Rams WR will score you enough points this week. In the last 4 weeks, the only Rams WR that has over 20 points (in total) is Tavon Austin, and he’s Questionable to start. Don’t risk it with any of these guys.

Jared Cook is not a guy you want to rely on as he is up and down more often than a bungee jump. I’d rate him as a TE16-20 this week. He has only scored over 5 points on 3 occasions this season and could only muster 4.9 points against that awful Arizona defence in week 14.

Rams D/ST should not be started, even against the Bucs.