We’re one game away from a shot at the title… Stay calm and don’t get too cute with your lineups. I’ll see you next week…

Alex Smith threw 2 TDs to bump up his fantasy score to around the 14 mark, but don’t be too concerned as this game was over before halftime and Smith wasn’t required to throw the ball much in the second half. I would imagine you’re thinking that this week against the Raiders it will be a similar deal, but having watched the Raiders all year I can tell you that they are not as bad as that. They do allow the 4th most points (18.63) to QBs in fantasy though, and I think Smith can have a 15-20 point outing this week. He only threw the ball 20 times last week but this time he should see around 28-35 attempts, giving him just over 250 yards and a couple of scores. 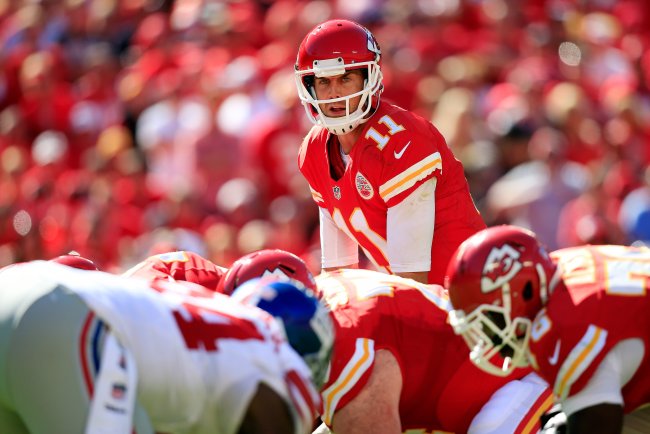 Jamaal Charles is in the form of his life right now. Do not bench him in any league or format. Potential top 5 RB every week. Benching Charles would be getting too cute with your lineup, something we are all guilty of from time to time. This week it really matters so keep him in and forget about your Vereens and Raineys.

Dwayne Bowe was also limited by Smith’s volume of passes, but even when Smith throws a lot, Bowe is only one of the 5/6 receivers Smith looks to. I would be happy to start Bowe as a low end flex in 12 team leagues. He has 3 TDs in his last 4 games with an average score of around 10 points in that span (non-PPR)

Anthony Fasano is not officially out of the game, giving Sean McGrath another look as the Chefs TE1. Don’t start McGrath unless you are absolutely desperate (maybe in a 16 team league where you have to start 3 TEs), as he hasn’t shown any consistency in his games as a starter (2/3-20 yards, 2pts last week as starting TE)

Chiefs D/ST bounced back against the Redskins and should be rolling against the Raiders. I expect a D/ST 8-12 performance this week.

Matt McGloin has thrown for 245 yards or more in his last 3 games and has under 13 fantasy points in just one of his 4 starts for the Raiders. I am a big fan of McGloin (his first name is Matt, his surname sounds like groin, what’s not to like?!) but I would temper my expectations against this defence. McGloin could have his lowest fantasy start as a Raider, but if he goes off and you benched him, be safe knowing it was the logical move. I predict 8-12 points for McGloin.

Rashad Jennings has been cleared to play after missing out last week and he should see 60%+ of the Raiders carries. I believe Jennings is auditioning for the Raiders starting RB job in the future, and with McFadden injured and almost certainly leaving the franchise this season, Jennings will continue to get the opportunity to show his worth. This week Jennings is facing a good run defence. I expected to find that KC had gone softer on the run since Justin Houston got injured, but they have only allowed a 100 yard rushing performance once in that period (4 games). Jennings could struggle and I’d peg him with 22-75-0.75 numbers this week. Those of you thinking of starting Marcel Reece be warned, he will not get enough carried to see the same amount of points as last week, but he has been an effective PPR player all year and in 16 team PPR leagues he should be started as a mid flex option. 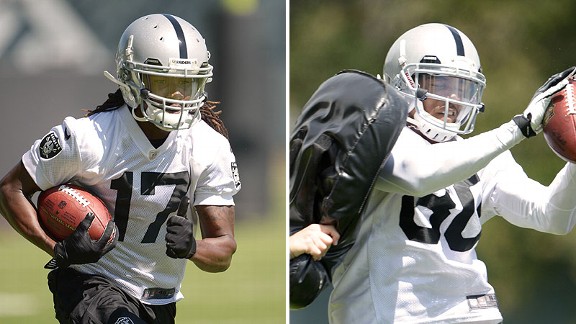 If its a choice between Moore and Streater, i’ll take the in form Rod – photo from espn.go.com

Denarius Moore is listed as Questionable but I expect him to start this week. However, Rod Streater may be the more appealing option, especially in PPR, as he has over 7 targets per game (10 last week) since McGloin became the starter. I think Moore is a volatile fantasy play this week, especially with his injury, and if forced between the two I’d take the in-form Streater as my flex player. Andre Holmes is nothing more than a dynasty prospect at this stage, though I have been impressed by him.

Mychal Rivera caught a TD last week but his inconsistency means playing him this week is very risky. One for the future perhaps, but leave him out this week.

Raiders D/ST shouldn’t be started against the Kansas City Chiefs.