Peyton Manning is going to be part of a shootout no doubt in New England. Don’t hesitate to start him this week.

Knowshon Moreno had a colossal 27 carries last weekend but only managed 79 yards. The story here was Montee Ball stealing goal-line carries off of him, resulting in 2 TDs. Long-term this should harm Moreno’s value if it continues, but right now keep plugging him in. I like Moreno for 12-16 points this week as he continues to be an underrated star. 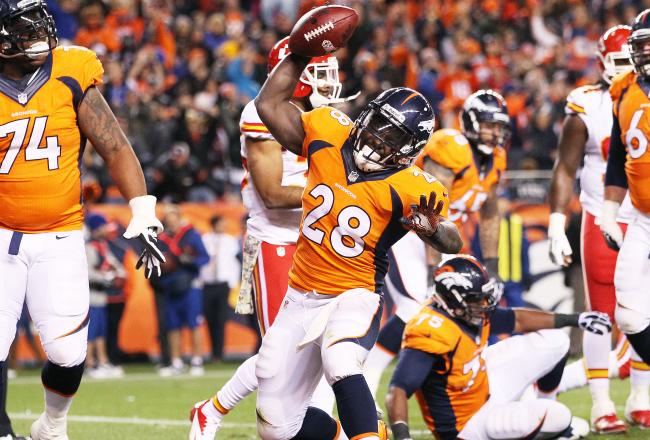 Montee Ball’s two vulture TDs could be a sign of things to come – photo from bleacherreport.com

Demaryius Thomas caught 3 TDs and scored over 28 points this week in a phenomenal performance. I reiterate what I write every week, all three of these guys are startable every week, I like Welker to put up a big score this week, but even if Decker scores the least of the three he should still get around 7 pts, not bad for a WR3.

Julius Thomas has been limited in practise all week, if he doesn’t start look out for a Delanie Walker or John Carlson on the waiver wire.

Broncos D/ST face a tough opponent but should still finish as a top 12 D/ST.

Alex Smith was pretty impressive, even as the Chiefs lost against the Broncos. Against the Chargers I love his upside, the Chargers can’t stop any QBs and Smith should get 12 points at least with upside in his legs and if he throws TDs. I’d say he’s a top 10 QB this week.

Jamaal Charles is a weekly starter, the matchup is fair, but he’s matchup proof anyway. Start him with confidence.

Could Dwayne Bowe’s fantasy value be revitalised? – photo from sports-kings.com

Dwayne Bowe is coming off a week with a TD catch and has seen a rise in targets in his last two games, with an increase in points also. Start him against a poor Chargers secondary (one of the worst in the league in fact) as a mid-range WR2. Hopefully he can get his season back on track and repay owners that paid a high price for him.

Anthony Fasano is the clear top tight end in the Chiefs offence but it’s hard to give him much attention when he’s been so inconsistent this year.

Chiefs D/ST against the Chargers is a middling matchup, I’d say they’re worth a D/ST 8-12 this week. Don’t drop them though as long-term they are among the best.

Philip Rivers had a bit of an off week last time out, throwing a TD and an INT. This week he faces a real tough opponent in the Chiefs. I think he’s in line for a 10-14 points haul this week and I’d be wary of expecting the performances we’ve been used to this season for this week at least.

Ryan Mathews ran all over the Dolphins weak run D this week, but failed to score a TD again. I wouldn’t start him this week any higher than a low end flex in 12 team leagues, I think he’ll struggle to move the chains against the Chiefs powerful D.  Danny Woodhead was even less productive, as he was kept in check in the passing game, catching just 4 passes. In PPR he is always going to be worth that flex spot but his value is limited this week in my opinion. I’d be starting him as a flex in deeper leagues but wouldn’t want to rely on him for RB2 numbers.

Keenan Allen had a shocker last week, but he is still the prime option for the Chargers. He’s a flex option for me this week with WR2 upside.

Antonio Gates finally caught a TD, his first since week 4 and only his third of the season. He’s a top 10 TE, but has become an erratic scorer this season which isn’t great for his long term value. Start him as a TE8-12 this week.

Matt McGloin had a phenomenal start for the Raiders, playing behind that line in your first NFL start in such a manner deserves far more praise than he’s garnered. In redraft his value is shaky for sure, but in Dynasty he could be something special and I’d grab him if you have roster depth. This week against the Titans? A real tough matchup, I can’t recommend you starting him, but in 16 team leagues definitely pick him up.

Rashad Jennings’ fantasy score was bumped by an 80 yard TD run to bring his total yards to 70 and increase his fantasy score by 14 points. This week he faces a bad run defence in the shape of the Titans, I’d start him as a high end RB2 as he is the clear #1 RB for the Raiders in a great matchup.

Denarius Moore is officially out, but Rod Streater had a nice game with his new QB at the helm. Streater finished as the most targeted player (8) and scored his highest fantasy total of the season so far. In PPR he’s worth owning in 12 team or bigger leagues, and I’d start him as a flex with potential this week, he’s certainly one to watch.

Mychal Rivera also saw a much greater role with McGloin as his QB, with 54 yards (a season high) and a TD (just his second on the year). Rivera is still somewhat of an unknown entity so don’t rush to grab him, but like Streater, his value is significantly increased while McGloin is starting as the Raiders QB.