Carson Palmer’s last performance saw him throw just one pick, but he’s thrown a pick in every single game so far, bear that in mind if your league punishes INTs. Against the Texans, who have demoted Ed Reed from first team duties, he likely won’t pass the ball a great deal as Arizona are likely to mould their offence around a running attack, since it was so successful against the Falcons (30 rush Att v 18 Pass attempts). This makes Palmers ceiling pretty low and I wouldn’t rank him higher than 20th this week at QB.

Andre Ellington was finally given a significant load (15 carries) and managed 10 yards per attempt including a huge 80 yard effort. As I said above, Arizona are likely to run the ball a lot and Ellington will see at least half of the carries. Mendenhall is iffy at the moment with a head injury and I can’t see why Arians would rush him back (forgive the pun) when Ellington showed so much promise. Start Ellington as a RB2 this week but he could have a RB1 week if Arians matches his production with more carries. 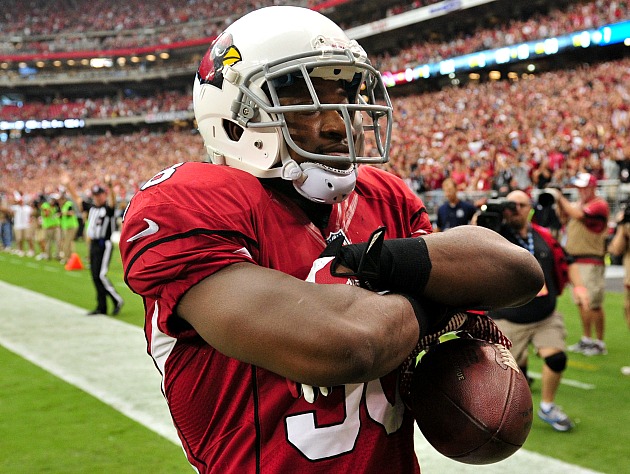 Ell’s Bells! Andre Ellington was a monster last week, expect it to continue with Mendenhall’s health uncertain – photo from sports.yahoo.com

Larry Fitzgerald is finally off the injury report after being listed with a hamstring problem for quite some time. The bye week has obviously done him good but I reiterate that Arizona won’t be throwing the ball a whole lot. Fitz is a low end WR2 play this week for that reason and Michael Floyd a flex choice in deeper leagues.

Rob Housler has been very disappointing this year and isn’t worth owning.

Cardinals D/ST have top 10 upside this week against Case Keenum and the Texans, a good bye week filler.

Colin Kaepernick is facing the toughest fantasy matchup for QBs, as the Panthers have allowed less than 11 fantasy points to opposing QBs on average this season. Significantly, the Panthers have allowed no rushing TDs to opposing QBs and just 43 rushing yards from 21 attempts. That’s the lowest YPC average for QBs by some way and that includes a game against Russell Wilson in week 1 when he rushed for 7 yards off 4 attempts (though he did throw for 320 yards and a score.) Ultimately I’d say Kaep always has upside, but this is certainly a tough matchup and I think the match will be pretty low scoring. Start Kaep as a low end QB1, he should get 10-14 points as a floor you would think.

Frank Gore is also facing a mean matchup, but his talent and workload should see him upto 70 yards. I can see Gore scoring 6-10 points this week, if he scores a TD then more, a high RB2 against the Panthers

Anquan Boldin is struggling to get seriously involved in the passing game, enough to warrant a start at WR. He’s got genuine upside considering the limited WR options at San Fran at the moment and in PPR I’d say he’s a WR3 easily. In non-PPR formats he’s a low end WR3 though as his inconsistency since week 2 has been an issue.

Vernon Davis has to be the focal point of any 49ers attack and I can see him having a lot of involvement this week. Davis can explode with a deep catch at any point and that’s why you drafted him. Plug him in as a top 5 TE this week.

49ers D/ST as I said above, I can see this being a relatively low scoring game with turnovers and big defensive plays. I think both the Carolina and San Francisco defences can be top 8 plays this week.

Russell Wilson overcame a shaky start to finish with a hatful of points last week, and against an awful Falcons pass D he should thrive. Peg him in for another 20+ points this week.

Expect Russell Wilson to pile on the misery for Falcons fans this week – photo from www.nwsportsbeat.com

Marshawn Lynch got the touches his owners wanted to see and finished with 6YPC and 125 yards. He’s a guy you just can’t bench ad should top 100 yards once more this week.

Percy Harvin is unlikely to suit up this week which gives Golden Tate, Doug Baldwin and Jermaine Kearse the opportunity to score you points. Tate has the most upside by far but don’t underestimate Baldwin. I’d have Tate as a low WR2 and Baldwin as a mid WR3. Kearse could be started as a low end flex this week in deeper leagues, as this is a tasty matchup for WRs.

Seahawks D/ST should be started as a top 10 D/ST potentially this week.

Kellen Clemons is only rosterable in deep league and shouldn’t be started unless in an emergency, regardless of opposition. The Rams are running the ball a lot more without Bradford, and this shows they don’t really trust Clemons to win them games with his arm, and neither should you.

Zac Stacy lead all RBs in fantasy points last week, with 178 all-purpose yards and a pair of scores on the ground against the Titans. He leads all RBs in yards (261) and carries (53) in the last two weeks and he has earned a feature role in the Rams offence. I can see Stacy continuing to pile up on carries and yards for the rest of the year and he has legitimate RB1 potential this week. His running style is a lot like Frank Gore, he’s tough to tackle and drives his legs to earn more yards after contact. He possesses more speed than Gore though so I think he has a lot going for him. I’m a very pleased fantasy owner, I’ll say that much. The other Rams RBs are not much to write home about though I’d keep hold of Richardson at this stage.

Stacy ran all over the Titans defence last week, and nobody has more carries or rushing yards than him over the last 2 weeks – photo from msn.foxsports.com

I’m not going to waste any of my or your time talking about Rams WRs. None are startable this week and I’d probably only own Givens or Pettis at a push. Drop Austin if you haven’t aleeady.

Jared Cook caught a TD last week, his first since week 1, but this may be more to do with him facing his former team the Titans. Interestingly though, Cook has 12 targets (6 in each) over his last two games, good for tied 6th at TE in that period. Worth keeping an eye on him if you own him but I wouldn’t pick him up unless you’re desperate.

Rams D/ST aren’t going to be worth starting any week. They continue to be porous against the run, giving Chris Johnson a field day last time out. Whilst they can force turnovers they just aren’t a startable fantasy Defence any week.