Philip Rivers will duel with Peyton Manning this week in a game that will challenge both QBs to outscore the other. Rivers has a good matchup and he should surpass the 16 point mark comfortably. Top 5 QB upside this week.

Ryan Mathews is not worth starting barring a bye week massacre, he is just too inconsistent and frustratingly unproductive. Moreover, this is going to be a match fought in the air and Ryan Mathews won’t feature in the passing game much if at all.  Danny Woodhead on the other hand offers significant value in the passing game, as he caught 9 passes for 77 yards last week. In PPR weeks he has top 10 RB upside every week and I think he’ll get over 15 points easily in that format. In non-PPR he still has low RB2 value and is a nice flex choice.

Woodhead is a much better fantasy RB than Mathews, regardless of opposition or scoring format – photo from thecoastnews.com

Keenan Allen is the top WR by some way, last time out 8 of the 13 receptions by Chargers WRs were to him and he had more yards per catch than Royal and Brown who may be better setting up a law firm. Allen is a top 15 WR this week in my opinion, a fine WR2.

Antonio Gates disappointed me last week, but more than anything Rivers’ inaccuracy (29/46) is partially to blame. Gates is a great tight end despite his age, and will likely be a top 10 most weeks. Play him as a good TE1 this week, as he should feature significantly in the Chargers offensive gameplan.

Chargers D/ST against the Broncos? You’d be better playing the Chiefs (who are on a bye)

Peyton Manning is breaking records almost every week. Start him as QB1 against one of the softest pass defences in the NFL.

Knowshon Moreno’s production can’t be argued with and he’s thriving in an offence that is looking at stopping Manning first, with him as an afterthought. Start him as a low RB1, continue to ride him whilst he’s hot.

This week I’d order the WRs as: Welker > Thomas > Decker. You honestly can’t go wrong with any of them this year and this week is no different, between them they’ll likely score over 30 points, just pray the fantasy Gods shine on your starter and not your opponents this week.

Julius Thomas had a down week with just 3 catches for 29 yards, but don’t let that fool you. This guy has talent and a great team around him, that was just his week to be 4th in the pecking order. Likely it won’t happen this week so start him as a TE1 with ease.

Broncos D/ST have been disappointing, even with the return of Von Miller, I think you can make a case for a lower than 15th finish this week. However don’t drop them unless you have to, stick with who you drafted. Likely this won’t make or break your season or matchup anyway.

Terelle Pryor was poor against the Eagles but I’d say that was more down to the Raiders Defence flat out giving up in the game. Pryor did his best to keep the game manageable, but even Peyton Manning couldn’t have won that game for the Raiders. Add to that a complete lack of a running game with McFadden leaving the game early, and Pryor’s performance can be excused. Against the Giants the Raiders D are less likely to get served an All-You-Can-Eat-Touchdown-Monsoon (ACYETDM), and Pryor may actually get a chance to play his natural game rather than forcing passes and making mistakes. He always has that top 10 upside because of his running and I’d say he’s around a 14-18 point QB this week.

Darren McFadden left the game early and I’m pretty sure he’ll sit out this week at least. Step up Mr. Rashad Jennings, who managed 102 yards on 15 carries and a score, as well as 7 receptions for 74 yards. Jennings is a sleeper RB this week against a soft defence, and I can see him quietly finishing as a top10-15RB. However, I remember last year when Jennings got a full game for the Jags he was worse than awful against a poor run D, so be warned. If you’re a McFadden owner then grab Jennings if he’s there, you really should’ve handcuffed him at the start of the season anyway so those owners will be rewarded (of sorts). 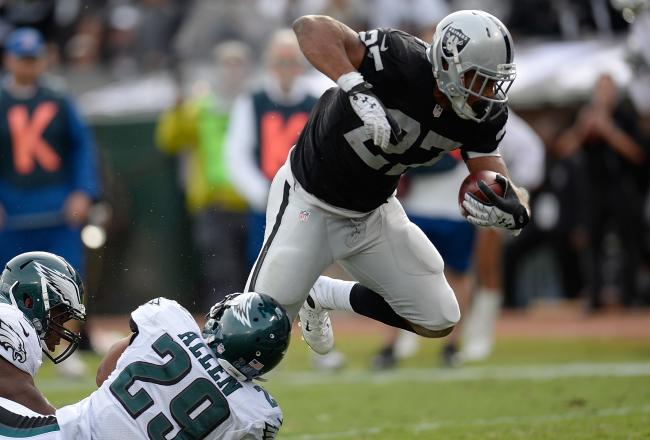 Rashad Jennings could prove a valuable hancuff this week against the Giants – photo from bleacherreport.com

Denarius Moore caught 5 passes for 84 yards, not a bad return considering how abject the Raiders performance was. I’ve said it before, Moore’s skillset matches up well to Pryor’s, and his ability to extend the play gives Moore and Rod Streater a reasonable amount of value each week. I’d start Moore as a low WR2 with WR1 upside this week – he’s undoubtedly Pryor’s favourite WR. Streater is worth owning but only in deeper leagues. A better dynasty prospect in all honesty.

Mychal Rivera is not ownable in any but the deepest leagues. Avoid him and all Raiders TEs.

Raiders D/ST. Just drop them and forget them. If you can