Alex Smith will be looking to lead his Chiefs to another win, and he’s facing a team that other QBs love. Smith isn’t a weekly starter, but his matchup this week makes him potentially a top 10 QB against a team that has allowed multiple TDs to all their opposing QBs this year.

Jamaal Charles is startable every week as a RB1. No way you should drop him here.

The leading Chiefs receiver is actually Jamaal Charles with 41 on the season. McCluster, Avery and Bowe have between 20 and 26 each. It’s tough to predict who will be the beneficiary of a big Alex Smith performance but I like Bowe over McCluster over Avery. Bowe is a low end WR2 this week. The other pair low end flex choices.

I though a picture of Bowe next to Jamarcus Russell would cheer Bowe owners up a little… – photo from sports.espn.go.com

Anthony Fasano and Sean McGrath just aren’t contributing enough to warrant starting. Own Fasano at a push but McGrath isn’t worth much outside of Dynasty.

Chiefs D/ST against the Bills is a pretty good matchup. D/ST 5-10 this week is my prediction.

Philip Rivers is facing a great matchup this time out and I’d happily start him as QB1 in a 10 team league. I can see Rivers throwing for 300+ yards and a pair of TDs as a minimum against the Redskins.

Ryan Mathews has been bad and good this year, and between him and Woodhead you have a fantasy dilemma. Of the two Mathews will always be a safer choice but Woodhead offers you more in PPR and has the higher ceiling. This week Woody wil thrive on short passes and given the chance to beat a weak secondary. Both could contribute low end RB2 numbers this week, but I’m tipping Woodhead to get a TD or two. Start them accordingly.

Keenan Allen is one of my favourite players this year and he shouldn’t have trouble against a Defence that allows the 5th most points to WRs this season (26.9 Avg per game). Allen has WR1 upside this week and guys like Vincent Brown and Eddie Royal are flex options with upside this week also.

Chargers D/ST shouldn’t be played this week. If you own them, drop them.

Terelle Pryor grabbed over 15 points on the first play of the game but from then on went downhill, throwing a pair of picks. I still really like Pryor’s upside on a weekly basis, and far too many people are believing him to just be a running QB but he has a reasonable arm from the games I’ve seen this season (all of them). Pryor v Eagles is a real nice matchup as well, so I’m gonna go out on a limb here and say he scores over 20 points. Pretty conservative considering his rushing ability.

Darren McFadden got two TDs, but only managed 73 yards on 24 carries. Without those TDs he would’ve had a rough night in fantasy. Matchup wise, McFadden is facing a so-so defence, and I think Oakland will lead their attack through the air. If McFadden can get involved in the passing game he can put up RB2 numbers but I’d expect no more than 10-12 points this week from him. 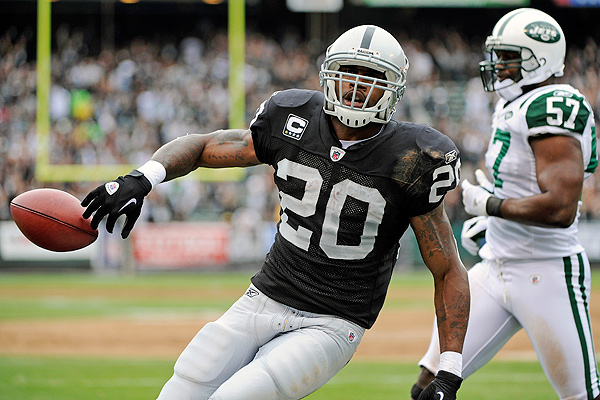 McFadden’s 2 TD haul may lead owners into a false sense of production – photo from espn.go.com

Denarius Moore had a quiet week last time out, largely as Pryor only completed 10 passes. Against a team like the Eagles they’re going to need Moore to step up and we all know he has the ability to do just that. I’d expect a 12-16 point haul from Moore. Rod Streater is only going to be owned in deep leagues, I can see flex value in him this time out.

Mychal Rivera is not ownable in any but the deepest leagues.

Raiders D/ST aren’t a great fantasy Defence anyway, and against a high-powered offence I wouldn’t be starting them this week in any league.