Carson Palmer was shocking last week against the Carolina Panthers. This week he has a horror matchup and I wouldn’t be starting him in any leagues.

Don’t start Palmer in any leagues. – photo by www.arizonasports.com

Rashard Mendenhall split carries with Andre Ellington last time out and the pair both had success on the ground, Mendy had a TD but Ellington had a nice 7.5 YPC on 7 attempts, which could stand him in good stead long term, especially since Mendenhall had just 2.5YPC on 17 attempts.. Either way don’t start them against the 49ers unless you’re seriously desperate. I say they combine for under 8 points this week.

Larry Fitzgerald just isn’t getting the targets you would expect and is a risky play each week. Don’t be afraid to bench him this week, I can see another sub 10 pointer performance from him. Floyd is in the same boat but with less expectation of course.

Every heard of Jim Dray? Well he caught Palmer’s lone TD last time out, his first in the NFL. I’m not saying pick him up of start him mind you.

Cardinals D/ST Had an absolutely stunning game last time out, 7 sacks, 3 INTs, a safety and a forced fumble… Plus just 6 pts allowed. Daryl Washington coming back really sparked them into life and they could be productive against the 49ers who’s offence has been far from stellar. I’d put the Cards in at D/ST 10-14 this week.

Colin Kaepernick will have disappointed fantasy owners in a big way. He’s just not running enough to get you the points you were hoping for when you drafted him. However, This is a game the 49ers would expect to win and for that Kaepernick will need to perform. I’m going to stick my neck out and say this week CK scores over 18 points and gets back on the fantasy map.

Frank Gore faces a solid defence this week in the Cardinals, but he has shown that he can put a solid game together against a good defence, as he did last week. One concern is that Gore is losing some goal line carries to Anthony Dixon, but don’t let that stop you from starting him just yet. Gore should be an RB 12-16 this week.

Anquan Boldin is the only WR worth starting for the 49ers and I’d peg him in at around 12 points this week in non-PPR. 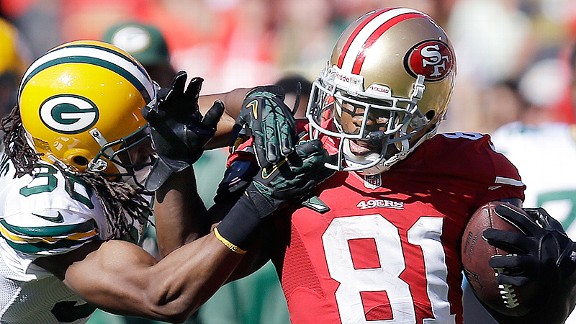 Vernon Davis looked free of injury and managed to get 88 receiving yards and a score on just 3 receptions. Davis will be productive in a secondary that struggles against TEs, allowing them the 4th most average fantasy points this year (28r-425y-4td)

49ers D/ST against the Cardinals is a definite start. The Cardinals have been turnover happy lately and the 49ers Defence is unforgiving, even in the absence of Patrick Willis who may make a return this week.

Russell Wilson really impressed me against the Colts, using both his arm and his legs to rack up 22.6 fantasy points (10.2 through rushing yards). Tennessee have surrendered the second least fantasy points to QBs, but don’t let that put you off starting Wilson, who is unlike the other QBs they have faced: Roethlisberger, Schaub, Rivers and both Geno and Alex Smith. I’d be shocked if the Titans can stop Wilson eclipsing the 14pts mark at the very least. Wilson is a top 10 fantasy QB this week comfortably.

Marshawn Lynch is another player who impressed me last time out, blasting through defenders consistently on his way to 102 yards rushing. Lynch is a guy you can rely on  to get 80 yards at least as a benchmark, any TDs are just bonuses. I can see Beast Mode being a RB6-10 this week

Golden Tate has 16 targets thru the last 2 weeks and is reeling in some superb catches. I feel Tate has quickly become the big-play threat of the Seahawks passing game, with Doug Baldwin doing his fair share with 13 targets over the same period. Tate can be started as a mid range WR3/Flex in 12 teamers I feel, but I’d hang fire on Baldwin at present. Aside from his huge day against Jacksonville in Week 3, Sidney Rice has just 16 targets and 6.8 fantasy points. He’s quickly becoming droppable in all formats, but maybe hang fire for this week.

Luke Willson is now slightly higher ranked than Zach Miller in my books, though neither are worth starting or owning.

Seahawks D/ST should be started in a reasonable matchup.

If you drafter the Seattle Seahawks you really should be playing them every week – photo from blog.seahawks.com

Sam Bradford performed well against a poor defence last time out, and today he faces the best defence against the pass in the NFL. I’m having a tough time starting Bradford over many guys this week, a QB16-20 against Houston.

Zac Stacy looked great against the Jaguars in week 5. He got 14 carries and managed a 5.6 average but failed to score a TD. In comparison Daryl Richardson had just one less carry and an average of 3.7 yards per carry. The Jags are the worst team against the run in the NFL at the moment, but its clear that Stacy outperformed DRich. It’s still a situation to avoid, but I’d be much happier owning Zac than Richardson right now. I would only bother starting Stacy in a deep league if you’re desperate this week.

The Rams WR carousel keeps on spinning, with Brian Quick now getting a few looks. Bradford found 4 different WRs last week and 7 receivers in total. Austin Pettis is the top dog and he has the size and speed to remain that way. Chris Givens is still serviceable, but until Bradford finds a true #1 WR this is not going to be a very happy fantasy hunting ground. I’d rank Pettis as a borderline flex starter, but I don’t like his matchup.

Jared Cook was quiet against the Jags, but his fellow TE Lance Kendricks caught 4 passes (Tied highest on team) for 37 yards and a TD. Kendricks is emerging into a Tony Scheffler type production as a second TE on his team, but he has shown he can really contribute and may see more looks. I’d still say Cook is the better starter right now, he’s going to struggle to top 8 points this week though, barring a score.

Rams D/ST could be Schaub’s last chance to keep the starting QB job in Houston, but I expect him to pass it. If Andre Johnson sits they may be a borderline top 10 D/ST but there are certainly better choices out there.