Larry Fitzgerald should vault back into the ‘Elite’ WR category this year. Photo from www.utsandiego.com

Carson Palmer will make his Cardinals debut this week against the Rams in a divisional matchup that will likely be low scoring. Both defences are solid, especially against the pass and neither has a great offence. Palmer should be in line for a QB12-15 display this week, so unless you’re in deep leagues you may want to consider benching him.

Rashard Mendenhall is looking likely to start this week despite missing the last pre-season game, and he should be on course for 12-15 points this week. Mendenhall’s issues in fantasy are not performance or consistency related, but injury related. If you aren’t playing Mendenhall while he’s healthy then why did you draft him?

Larry Fitzgerald is matchup proof. Start him this week in all leagues. Andre Roberts and Michael Floyd could also be a reasonable flex option in deeper leagues. I have Floyd slightly higher than Roberts in preseason but one of them is going to have a good year, no doubt about it.

Rob Housler has had a miserable preseason, but he certainly has talent to make an impact in fantasy this year. If you drafted Housler as your starter you likely waited on him till late. I think Housler should score between 5 and 8 points this week, but he has all the attributes to contribute more. I’d start Housler over the likes of Jermaine Gresham but not over say Owen Daniels.

Editor’s note: Housler is day-to-day with a high ankle sprain and is Questionable to play Week 1.

Cardinals D/ST is a value pick, and they have a nice matchup here in all honesty. Potential top 12 finish this week against the Rams.

Sam Bradford could be on the verge of a big season, one that both him and the Rams need after picking him first overall in 2010. This week though Bradford is facing a defence that allowed the second least points to QBs last year, and they have hardly got weaker with the additions of Tyrann Mathieu in the draft and John Abraham in free agency.

Daryl Richardson has earned the starting role at RB in St Louis, though I wasn’t convinced he was  good enough. The Rams staff definitely know more about the RB group there, so Richardson it is. He’s definitely worth starting as a low end RB2 or high flex option this week and the matchup is reasonably good. Don’t be surprised to see Richardson as a top 15 RB this week.

Chris Givens is an underrated WR this year, and appears to be the leading WR for the Rams at the moment. However with so many mouths to feed in the passing game it’s tough to recommend starting him as anything other than a low end flex this week. We need to season to progress further before having good judgement here. Tavon Austin is likely to be a PPR WR2 come the end of the season but rookie WRs tend to start the season slowly so don’t anticipate a break-neck week from him against the Cards.

Jared Cook should excel in his new home after moving from Tennessee – and this season might see him become Bradford’s favourite weapon. I’d be happy to start Cook this week as a low end starter in 12 team leagues.

Rams D/ST Like the Cards, this unit should be solid this week, likely posting a top 12 D/ST outing.

Colin Kaepernick shredded the Packers defence in the playoffs last year, racking up 181 rushing yards, 263 passing yards and a pair of TDs on the ground and in the air. That would be good for over 50 fantasy points. Now I don’t need to tell you he wont repeat that, but Kaepernick is nevertheless a good QB start this week, easily top 10 and approaching top 5. I can see Colin scoring 18-24 points this week.

My NFL man-crush, Frank Gore, will lead the 49ers rushing attack and should see a minimum of 15 carries, likely rising into the early 20s. The matchup is middle-of-the road, but Gore should get just over 100 all purpose yards and perhaps a score too. I’d rank Gore as around the 12-16th best RB this week, an easy RB2 start in most standard leagues. If you play in deeper leagues, Kendall Hunter may be worth a shot too in the flex spot, but his scoring is difficult to predict. Only start him if you’re short due to injuries or suspensions.

Anquan Boldin is going to be Kaepernicks favourite target this season no doubt, and in PPR leagues he should be a top 20-25 WR. I can see Boldin with at least 5 catches for perhaps 80 yards this week. 8 points is not something to be sniffed at and he’s a low end flex option in 12 teamers. At this stage of the season I wouldn’t recommend starting any other WR in even a 20 team league, though I think Kyle Williams could surprised a few by season’s end.

Vernon Davis struggled last season when Kaepernick took over, but with Crabtree out he has to make his presence felt this season and make the most of the increased targets he should get. Assuming you drafted Davis in the first 6 rounds, it shouldn’t be a tough choice whether to start him or not this week – the problem comes if he starts off slowly. You may need to have patience as a Davis owner this season, though 8-10 points should be achievable this week. 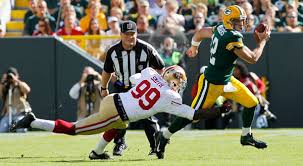 Aldon Smith and others will likely get to Rodgers early and often this Sunday – Photo from www.nytimes.com

49ers D/ST have a tough matchup this week – despite being one of the best NFL defences – it’s tough to stop an offence like Green Bay. 49ers are a middling D/ST choice this week, but if you drafted them you should start them regardless, as you don’t want to waste a bench spot on them this week and they shouldn’t be dropped. Bear in mind the Packers O-Line allowed 51 sacks last year though so a few early QB hits could make all the difference in this one.

Russell Wilson had a phenomenal rookie season, his rushing ability makes him even more of a mouthwatering prospect this year. He should be fine against the Panthers this week, there’s no reason not to start him. A top 10 QB this week.

Marshawn Lynch is among the best RBs this year and barring a draft miracle there is no way you should consider dropping him this week. The Panthers defence are so-so against the run, but that’s not really too important with a back like Lynch. I can see Lynch comfortably marching over 100 yards and he’s likely to get a score as well. Easily 12 points plus this week.

Sidney Rice and Golden Tate have been thrust into starting roles after Harvin was injured this pre-season. I really like Rice, I think he’s more of a complete receiver than Tate and has a track record of being a good fantasy WR. I’d happily start Rice in the flex. Tate could put up flex numbers but as of now I’d rather be starting Rice. Stephen Williams came out of nowhere and now sits 3rd in the depth chart. Don’t start him this week, but he may be worth looking for on the waiver wire if he explodes onto the scene. 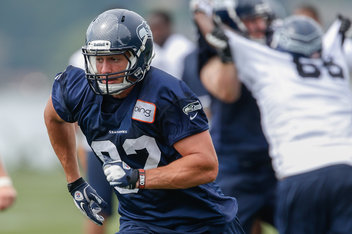 Luke Willson was the standout TE in Seattle’s camp and preseason – photo from www.sbnation.com

Zach Miller is undraftable at this stage. Luke Willson however, has impressed me this preseason and I’ve heard a lot of good things about him. Neither will be rosterable in any league format really, but I prefer Willson of the two for definite.

Seahawks D/ST are the best in fantasy. They should be top 5 most weeks and you should start them each and every week as there’s no point in holding 2 D/STs and no point in dropping the best D/ST in the league since you likely paid high to draft them.