Carson Palmer lead his team to a late victory, but it came at a fantasy score of under 10 points, not exactly setting the world alight. Panthers allow just 11.15 fantasy points to QBs, though they faced a woeful Eli and the rookie Manuel in that period. Palmer has been very disappointing this year and I would only start him in a bye week emergency. He should score between 10 and 14 points this week.

Rashard Mendenhall’s week 4 performance drew criticism from Head Coach Bruce Arians and it looks like rookie Andre Ellington may get a shot to lead the Cardinals line. It’s definitely a risk playing either as we don’t know how the timeshare will work. I like Ellington more long term though, both are low end flex in deep leagues at best this week, just hope you start the right one if you do.

Larry Fitzgerald has been up and down but for the first time this week he is completely off the Cardinals injury report. A late TD rescued his performance this week and he should get lots of looks this week. I would say Larry is a middling WR2 this week. Floyd is a low end flex option at this point and Andre Roberts even lower. Both could be good but we need to see more at this stage.

Rob Housler had just two targets last week. He’s not worth owning in most leagues unless you’re prepared to be very patient.

Cardinals D/ST are barely startable this week unless you’re in a deep league.

Kaepernick bounced back a little last week with 167 yards, a pair of scores and crucially no TDs. With a mobile QB like Kaep you have to take the rough with the smooth and I’d only bench him in an emergency. The matchup isn’t great but Kaepernick has played well at Candlestick so far in his career.

Frank Gore ran the Rams defence ragged last week after a slow start. He’s likely to see 18-22 carries each game, so barring a big defensive performance, 8 points should be a good floor to start with. This week he’s likely to score 12-14 points, especially if he hits his stride early. No other 49ers RBs are startable

Anquan Boldin should be started as a low to mid WR2 this week, and slightly higher in PPR given his volume of targets. No other 49ers receiviers are fantasy relevant at this stage, Kyle Williams has the second most receptions with 9.

Vernon Davis is still harbouring a minor injury. I’d be wary of starting him at the moment unless you have to. Whilst he’s banged up he’s a boom-or-bust TE8-10 this week in my opinion.

49ers D/ST should be started if you drafted them. Likely a top 10 performance this week.

Russell Wilson has scored under the average points allowed to fantasy QBs in 3 of his 4 games so far. The Colts are second in the league this week so Wilson may struggle, however the Colts offence is looking good this year and Wilson may need to pass more to keep his offence up with the Colts’. Wilson should be good for around 12-16 points this week.

Marshawn Lynch has actually fared better in his tough matchups this year and I think he could be in for a good time. I’ll give him about 16 points this week.

Beast Mode is a reliable RB1 start this week – photo from www.taylorblitztimes.com

Sidney Rice caught just one of his five targets last week, and he cant be relied on on a regular basis. Baldwin should be rostered at present and is, like Rice, a low end flex option. Tate should be reserved for 16+ team leagues.

Zach Miller caught two TDs in week 3, but aside from that he has just 7 fantasy points on the year. Don’t own him or start him.

Seahawks D/ST should be started despite the matchup.

Sam Bradford has cooled down after a red-hot start, and this week I think he’ll get back on track. I’m going to be bold and say Bradford will throw 3 TDs this week against the Jags. Start him as a low end QB1. He’s proved he can do it against Atlanta and Arizona, time for the Jags to get a taste.

Daryl Richardson should not be started this week, in fact none of the Rams RBs are worth the risk. The matchup is good, but we have no idea who will get the most snaps. I trust Richardson the most, Pead the least and perhaps Zac Stacy could get significant carries this week with Pead unlikely to even be on the field through injury. Avoid at all costs.

Tavon Austin may see snaps at RB this week, which can only be good for your fantasy team. The other options are Givens and Pettis, the latter has come on a lot these last few weeks and I like him this week as a low end flex. The other two are decent starts as well, Austin as WR3 and Givens as a low end WR3. If Bradford is going to play well he’ll be using these receivers a lot.

Jared Cook has 32 targets this season, just one away from tied 3rd at TE. If he can improve his 57% catch rate he will be a solid TE for the season. Start him this week as TE 6-8. 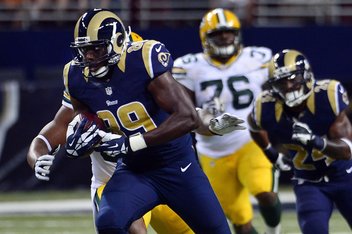 Jared Cook can get even better – photo from www.sbnation.com

Rams D/ST has started the season poorly but should be fine this week for 6-10 points.