Knowshon Moreno is edging the RB battle after leading the team in YPC with all 3 backs getting carries. I’d still be wary at the moment till a lead back is fully established.

All 3 Denver WRs are good starts each week and this week is no different. The short passing game could be effective against the Cowboys athletic secondary so I expect Welker and Decker to be very productive. Still start Demaryius Thomas in all leagues though. 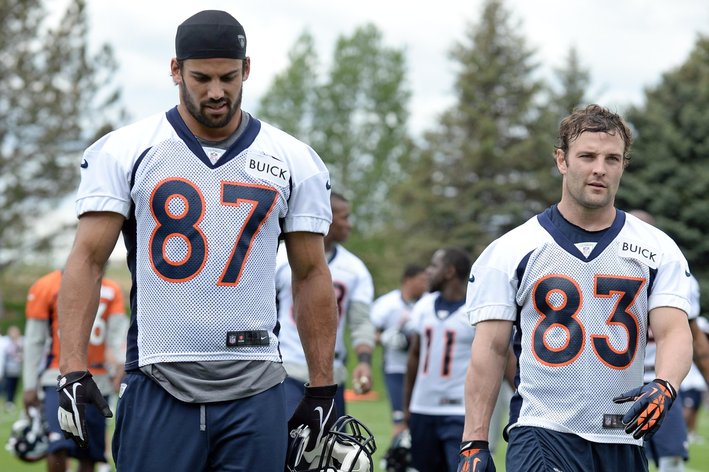 Decker and Welker should lead targets against the Cowboys – photo from www.sbnation.com

Julius Thomas didn’t get a TD last week for the first time but he’s still a good starter at the moment. I’d be inclined to sell high in a trade though if you haven’t already.

Broncos D/ST should score around 8-12 points.

Alex Smith has started off very well and I think he can be the Carson Palmer of this season. However I would argue that he wont have many weeks of over 20 points, so don’t be relying on him to get a big win. This week Smith should get around 14-18 points.

Jamal Charles should be started this week as a RB1.

Dwayne Bowe got a TD last week but he’s still hit and miss. I’d start him but be prepared to be disappointed any one week, though he may have turned a corner, changing his style to suit Smith’s skill set. I really like Avery, especially in PPR, play him as a solid WR3/Flex this week.

Sean McGrath came from nowhere to get 64 yards and a score last week. He is going to be KC’s starting TE this week so whilst I wouldn’t start him yet, I’d keep him on your radar if he pops up with another good performance this week.

Chiefs D/ST should continue a good start and be a top 8 D/ST this week against Ryan Fitzpatrick’s Titans.

Terrelle Pryor is the starter this week after recovering fully from a concussion, and I think it’s likely the Flynn performance will be his only one as a Raider. I’m a fan of Pryor short term, and he has a favourable matchup this time, as San Diego have allowed the most fantasy points to opposing QBs so far this year on average (26.57). If he can use his legs against the Chargers, he should grab around 16-20 points this time round.

Darren McFadden didn’t practise on Wednesday so he is a player to monitor up until game time. Rashad Jennings could lead the line this week, but I wouldn’t want to rely on him as any more than a low flex option after his dismal run for the Jags last year. Denarius Moore is a high end WR3 this week I think. All the WR performances from last week should be discounted as Flynn was throwing to them. Streater was a favourite of Pryor’s too so keep an eye on him long-term. This week he isn’t startable but perhaps rosterable in deeper leagues.

Mychal Rivera scored a TD last week and could emerge as a viable fantasy TE in the long term. Another player to monitor in your league but don’t grab him after one TD in one week.

Raiders D/ST aren’t worth starting against the chargers.

Philip Rivers has the 3rd most fantasy points at QB and faces a soft defence this week. Start him as a QB5 this week with 20+ points a distinct possibility.

Danny Woodhead has now eclipsed Ryan Mathews’ scoring on the season, though only just. I still think Mathews is a safer option, but Woodhead has serious value in PPR leagues as the 3rd most targeted RB in fantasy (27). Sell high on Woodhead now, but if you’re choosing between the two I like Mathews over Woodhead in non-PPR only.

Woodhead showed his potential last time out with 2 TDs – photo from www.sportsillustrated.cnn.com

Keenan Allen lead the team in receiving yards last week and the rookie could establish himself with Malcolm Floyd out. Allen is a WR3 option at best this present week, but he does have long term potential. Royal and Brown are low end WR3 options this week.

Antonio Gates is going to have a big game no doubt. Start him as TE 5-8