Pump those brakes! 6 players being overvalued in drafts

We’ve all been caught up in the hype machine at some point or another. It’s easy to watch a couple of big pres-season plays and think: “Man this kid’s got it all!” But make sure you see that for what it often is – just a snapshot of the big picture. When drafting for upside, you shouldn’t pay for a players fantasy ceiling – something I fear many people are doing this year. Here are a few players I think are being drafted too early as a result of preseason hype. Pump the brakes, pull over, take a few deep breaths and think about this rationally! 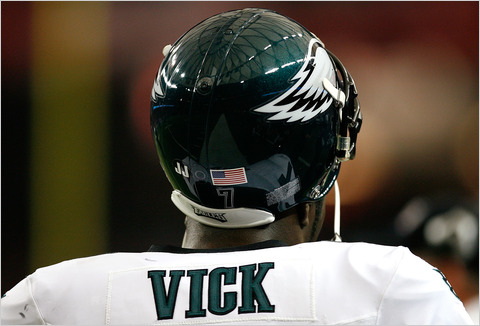 Even Mike Vick wouldn’t draft himself in the 9th round – Photo from www.warroomsports.com

Vick’s stock has soared up two round in the last few weeks – people appear to be buying into his talk of ‘loving the game again,’ and the fit with Chip Kelly as his new coach. Remember how bad Vick was last year? That doesn’t just evaporate with a new head coach, and a poor start to the season could easily see Foles takeover as the starter. Vick has undoubted upside – he single-handedly won leagues a few years ago – but look at those being drafted after him: Eli Manning, Jay Cutler, Andy Dalton and Ben Roethlisberger. All of these guys offer you a stable point to build your franchise. I’d take Vick as a QB with upside if the price is right – an 11-12th rounder if you want a precise figure – but I’m worried people are expecting a huge season from him. He’s no spring chicken, and his passing has never been the reason you draft him. Be wary of what you’re getting for that early 9th round selection.

Murray is a player who infuriates me. He is injury prone on the same level with Darren McFadden but not as talented, and yet he is going almost a whole round earlier than him. Murray did explode onto the scene two year ago with a handful of impressive games, but an injury (surprise!) ended his season early. Last year was a season riddled by injury and his performances were much poorer. His YPC dropped from 5.5 to 4.1 and he has never been one to get in the end-zone regularly (6TDs in 23 career games). Murray is definitely a boom or bust player and I would not want him as any more than a low end RB3. Sproles, Lacy and McFadden are all players I’d rather have over him but are going after him. Don’t fall into the trap.

Thompkins ADP has well and truly skyrocketed. 2 weeks ago his ADP was 13.06, now it sits at 7.11 and doesn’t show any sign of stopping soon. Whilst I like Thompkins and what he’s done a lot in preseason, do not overpay for this guy. KT is going ahead of Greg Jennings, Stevie Johnson, Mike Williams and plenty more of proven players. These guys have seasons of production behind them to lean on, whilst Thompkins is an UNDRAFTED ROOKIE. You should pay for his potential in your draft, nothing more. I wouldn’t be overly surprised if he finished in the top 20-30 at WR, but I also wouldn’t be surprised if he wasn’t in the top 50 – you cannot attach a 7th round pick to this player – don’t get swallowed in the hype. Remember Brady has Amendola and Edelman to lean on in the passing game, as well as Dobson and Gronkowski when he’s back from injury. Brady can turn trash into treasure at WR but a 7th round pick is crazy for Thompkins. Alternatively, if you did draft him a few weeks back – think about cashing in on the hype, and tradying him away for a Stevie Johnson or a Greg Jennings.

Lets clear this up, Eric Decker is the third choice receiver at Denver. So why are you drafting him ahead of a bunch of talented first choice WRs from other teams? Peyton Manning is his QB yes, but remember that Denver picked up Wes Welker from New England – there is no way either Welker or Decker can maintain their production from last year yet they are being drafted as if they have that same value. Here are just some receivers being drafted around Decker: Cecil Shorts, Steve Smith, Anquan Boldin, Mike Wallace. I am confident all of these guys will score more points than Decker, perhaps not in PPR but even then it’s pretty close. Of the two I prefer Welker, but neither are being drafted at a sensible point in the draft.

I think Finley has a chance this year to get a lot more looks and could prove a real asset to both the Packers and your fantasy team. However, considering the depth of TE this year, Finley’s ADP is too high. This is a guy who has flattered to deceive almost every single year despite being in arguably the most talented receiving corps in the NFL. I like Finley’s upside, but that should not cost you a 7th round pick. Considering you can get Olsen at 9.12 or Pettigrew in the 13th, Finley is too risky to take so much earlier. I’d slot him in at the 10th at the earliest.

Note: All ADP’s taken on 28th August 2013 from www.fantasyfootballcalculator.com