Team Snaps Per Minute Week 13 Report is a data “Snapshot” of the post Week 13 team snaps per minute activities and speed of play.

The table below presents weeks 8 to 13 Team SPM as well as their Seasonal SPM Average. Additionally, I focus on the most recent 3 weeks of each team (Last 3 SPM) and their Points scored per game (Last 3 PTs/GM). I finally have calculated each team’s SPM DIFFs comparing the Last 3 Games SPM Average vs entire seasonal SPM average.

I sorted the Team list by their last 3 weeks SPM average and colorized the Team names (Green Highest vs Red Lowest). FYI most of the top teams have also been improving see their DIFF.

Concerning teams for me are:

Note slower may associate with scoring points (see below). What is the source of the extremes in team speed? I am concerned about extreme changes within a team.

The Plot of each Team’s Last SPM vs Point Scored

The pink dashed line is the last 3 SPM average. Note the association of points scored with slow SPM team speed. The fast half of teams we see LAR, KC, and OAK only significantly above the average of Points Scored. The lower half of the league we have TEN, BUF, HOU, SEA, BAL, NO, and LAC. That is 3 vs 7 of the top scoring teams are slower teams.

So tie in my concerns to scoring and think deeper.

I used this data to focus in my lineups and DFS plays. More to highly used players vs lightly used players. More away from players whose DIFF is extremely negative (declining) vs Position DIFFs (improving).

The teams highly using their RBs are at the top of the league list. Especially focused on GB and SF. (Hence the run on Wilson in SF). Some concern on the CLE/DAL RB DIFF -0.068/-0.024!

The low usage teams are always of some concern but do note some improvements in KC RBs.

The top teams for using TEs are also many of the teams with positive DIFFs recently. Note KC, BUF, and MIN as improving. Note DET and LAR are improving in their DIFF.  I see that Clay (BUF), Troilolo (DET) and Higbee (LAR) are highly unowned in many leagues. Break glass in case of poor TE play! In the highly WR using teams, I note a nice DIFF in CHI while extreme declines in MIA and BAL. Note we see many teams that are outside the highly using teams are improving.   See TEN, PHI, WAS, ATL, LAR, NYJ, and SF. I predict and will test in the offseason that WR usages are higher in variation than RB or TEs!  I would consider scanning the free agents from these improving teams for surprising WRs for gambles in your playoffs. If you assess that you need upside, these team could supply what is needed for you this week!

Team Landscape of Usages of RB, TE, and WRs

Each Block of 4 teams has the position, Last 4 weeks of SPM, DIFF, Usages, and Usage Types. I look to find next man ups in highly using teams due to injury. ARI losing Kirk vs DEN losing Sanders. I would lean-to finding a surprise WR in ARI vs DEN.

The table focuses on:

Use these data to look into each team’s players. Is the entire team declining or specific positions or players? Use in lineups and DFS analysis.

Use for complete positional perspective. Who are the key players? Are they improving? Injuries? Who is next?

IE ARI  (Kirk to IR) seems to be Sherfield up! I move to use improving players in the playoffs! 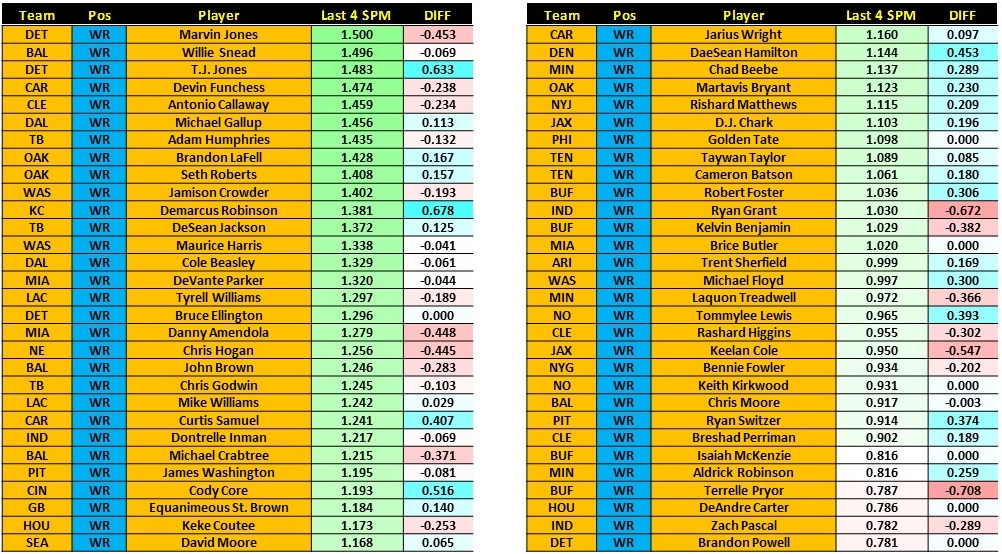 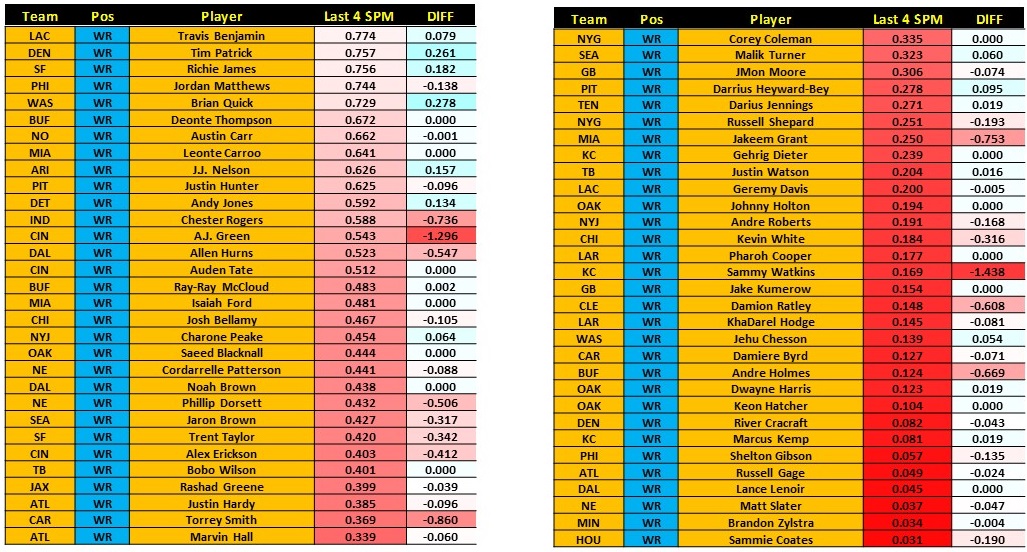