1)   Werdum Is Better Than Anyone Thought- 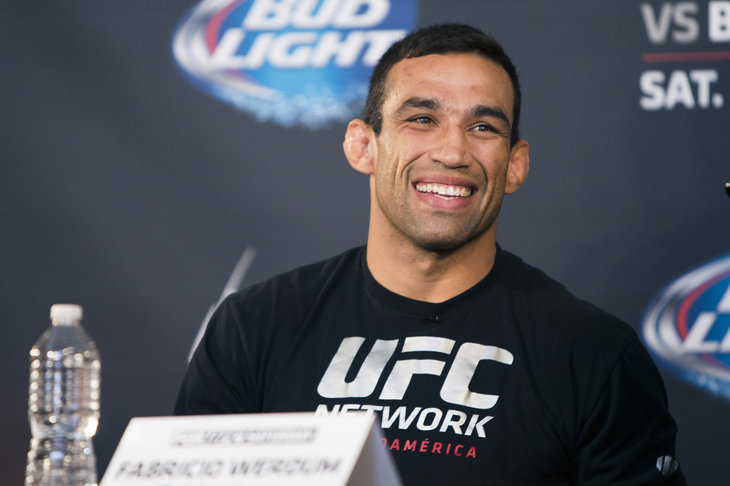 I admit, I chose Browne to dispatch of Fabricio Werdum and have his hand raised in the UFC on FOX 11 main-event, and I wasn’t alone. Even the staunchest of Werdum supporters did not predict for Werdum to handle Travis Browne with ease in the stand up department the way that he did. If you were a new fan tuning in, you wouldn’t believe that Werdum’s background is in submission grappling, and not kickboxing. All the experts leading into the bout (including myself) raved about Browne’s fluid stand up, and how light he was on his feet, but instead it was Werdum’s smooth stand up that stole the show. Werdum came in ready to go five rounds, and proved that 25 minutes isn’t a big deal for him. That gas tank will be essential if he intends to take the belt from MMA’s top Heavyweight, Cain Velasquez. Any credible fan would admit that Werdum was a top Heavyweight going into Saturday night, but I don’t think anyone thought he was a legit threat to the belt. After Saturday night Werdum opened up a ton of eyes, and I believe Cain Velasquez now knows he has a legitimate challenge coming his way later this year. Werdum is a very interesting challenge to Cain Velasquez because of the unique style clash between both men. Cain is known for his wrestling, cardio, and work rate that rarely allow fighters to see the final bell against him. Against Werdum however, will he attempt to put the two-time Abu Dhabi Combat Club Submission Wrestling World Championships gold medalist on his back? After all that is where Werdum was able to bait Fedor Emelanenko into a triangle choke, where he ended up tapping out the all-time great. Would Cain really play that game with Fabricio? And if Cain does decide to stand up with Werdum, there is no guarantee he would get the better of Werdum on the feet. Not against this new well-polished Fabricio that has become a better stand up fighter than anyone would have ever imagined. These are some of the big questions that already have fans anticipating the Werdum-Velasquez title clash later this year, which is tentatively scheduled to take place in Mexico City in November. I never in my life would have labeled Velasquez vs. Werdum, a “big money fight,” but after Saturday night’s performance by Werdum, I think that is exactly what we have on our hands.

While the official record states that this is the second setback of Browne’s 17-fight career, this is really his first legitimate loss. Sure he lost to Antonio “Bigfoot” Silva in 2012, but that was after he tore his hamstring in the opening moments of the fight, which practically made him a stationary target, that led to him being knocked out. This was the first time we ever saw Browne, clearly, and definitively beat up in a fight. I do think we saw some good came out of this for Brown, which makes me think we shouldn’t write him off as a legitimate heavyweight threat just yet. The main issue I saw with Browne Saturday night was his cardio, after the opening five minutes he became a slow timbering heavyweight for the last 20 minutes. Against the best guys in the world, you need to be able to go full strength for more than 5 minutes and Travis Browne certainly learned that lesson. I’m also pretty sure he only gassed because of the spotlight on him, fighting in the FOX main event for the country to see is a very daunting task. I have a feeling the bright lights got to good old “Hapa,” which is a valuable learning experience. Travis did show some good against Werdum that shouldn’t be overlooked. He proved he could take a punch; he was tagged repeatedly all night and never went down. He also proved he isn’t horrible on the ground either, seeing how he survived each time the fight went to the mat. Which is no easy task when you consider Werdum is the best grappler in the heavyweight division The loss to Werdum takes Browne out of immediate title contention. But nothing from Saturday night makes me think Travis won’t be back in the title conversation sometime soon. He is still a talented big man; he just lost to a big man who was better prepared than he was. In the fight game, nights like that are bound to happen. Don’t give up on “Hapa” just yet.

3)   Tate Has Mental Hurdles To Deal With-

I am not a psychologist, so my diagnosis could be a little off here, but Miesha Tate has some mental hurdles she needs to deal with. In the FOX 11 co-main-event women’s MMA star Miesha Tate came out as lethargic and conservative as fans have ever seen her. Which don’t get me wrong, was a nice change of pace from the wild reckless Tate we saw get tossed around by a calmer Ronda Rousey in their title fight this past December. But talk about going from one extreme to another. Fans love Tate because when she’s in the cage she fights with all her emotion and at an insane pace, sure she gets reckless at times but she fights with her heart. Against Liz Carmouche, she completely gave away the first round, and arguably gave away the second as well. Then when the third round came, Tate flipped back into her normal aggressive self, and dominated Liz over the final five minutes, almost ending the contest by rear naked choke on a few occasions. If the judges had awarded Liz Carmouche the fight, a lot of fans and fighters wouldn’t have complained, and Tate would have had no one to blame but herself. When Tate wanted to engage Liz, she was clearly the better fighter. But to often she wanted to play it calm and composed, and it almost cost her against the mentally strong ex marine Liz Carmouche. While in the end “Cupcake” got her much needed first UFC win, she also showed she has a lot of work to do in terms of mentally preparing for fights. She can’t be the wild aggressive Tate that was systematically picked apart by Ronda Rousey, but she also can’t be the passive Tate she was against Carmouche. She needs to find a middle ground, and until she does that she probably won’t fight for the title again anytime soon. Tate has the physical tools that 90 percent of the division doesn’t have, but she needs to work on her mental tools. After all you know what they say, the fight game is 90 percent mental.

Donald Cerrone is known for earning bonus money, just to go out and spend it on his expensive hobbies. Which is also why he keeps one of the busiest fight schedules out of anyone in the UFC, his expensive lifestyle means he needs to work more than the average fighter. Since joining the UFC in early 2011, he has already fought for the promotion 13 times. No one else in the UFC keeps up the pace that Cerrone does. And to his credit, he fights like he needs that extra bonus cash coming in. Cerrone again dazzled during the UFC on FOX broadcast, finishing Edson Barboza in a spectacular sequence that led to a first round rear naked choke. Cerrone doesn’t just fight to win, he fights to get paid and impress. As fight fans we are lucky to have him in MMA because we can pretty much bank on excitement each time he gets in the cage. There really is nothing like a sure thing in sports. We thank you Donald “Cowboy” Cerrone.

5)   Nurmagomedov Is Coming, Be Ware-

Despite how much you may hate having to learn how to pronounce Khabib Nurmagomedov’s name, trust me you will have to learn soon. Khabib recorded his 22nd consecutive win after besting Rafael Dos Anjos, and isn’t far off from a title shot. Because of his suffocating style of fighting, it may take another two or three wins before we see him compete for Lightweight gold, but I think it is only a matter of time. “The Eagle” is a special talent, and the other men at 155-pounds know it, that’s why he has such a hard time securing opponents that will help become a more well known name. I don’t know whom Khabib fights next because of how many opponents out there don’t want to fight this guy. But I do know chances are Khabib will suffocate them and keep his unblemished record in tact. All I’m saying is if I’m Anthony Pettis, I’m already beginning to train for the undefeated Khabib because those two are on a collision course, like it or not.