This is the first in a new Fantasy Baseball series called  “Mocking The Offseason” where I will be doing a realistic mock draft based on having pick 7 of 12. I am not strictly using ADP to determine what players are available, as much as drafting a team as I would in reality. I will break down each of the players I would hope to select in each round with the 7th pick. So come along for the ride….

For those of you who know me, or have read my Fantasy articles, you know I tend to play Fantasy sports with a High Risk/High Reward strategy. I will not take a player simply based on rankings, but try to to pick players who have high upside, I enjoy watching play, and typically are young. Obviously, every pick I make is not as desired, but I tend to stick to that methodology.

I value pitching, but I avoid drafting pitchers early. Ideally, if I can land an ace, or ace caliber starter in the first 5 rounds I am content, and load up on scarce positions, and hitters early. Then start stockpiling pitchers in the mid to later rounds.

So with that brief introduction, let’s get on with it shall we? 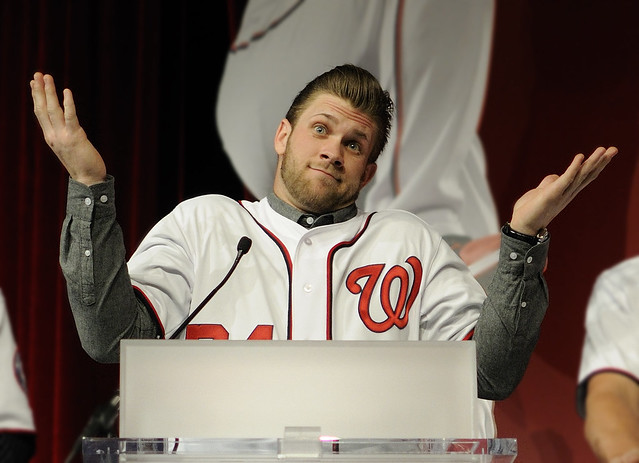 Bryce Harper in mid-First Round in 2014?? Why Not? Photo by: Scott Ableman (Some Rights Reserved)

When I first did a draft in early February and ended up with the seventh pick, I felt sorry for myself, and unfortunate. Middle of the draft….blah. Top 4 names….Gone. Ability to see or stop position runs…Not so much.

After doing that draft, and a few mock drafts I came away feeling not so icky. The middle of the draft isn’t really that bad. I don’t have to wait extremely long to pick, I can gauge who will be around a bit better than working from the ends of the snake, and I have more time to ponder each round, rather than potentially rush a back to back pick and regret it.

Now I am going to be honest here. I am torn between Davis and Bryce Harper. Harper is my favorite player in the game. I also know I will not get him if I don’t take him now.  Depending on league setup and format, I would likely take Davis 50 percent of the time. Keeper or Dynasty leagues however, Harper likely won’t fall to me at 7th overall, so it is a no brainer.

In this case, and for the sake of fun, I am taking Harper. In reality, it will be a coin flip. I mean, I cut my hair like Harper’s mullet last season! How can I not have him on one of my teams?? 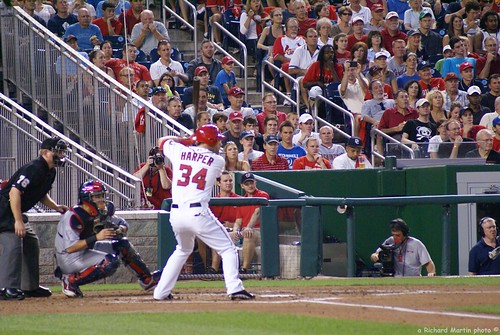 Harper has Bulked up in the Offseason which should lead to more power strokes in 2014. Photo By: L. Richard Martin, Jr.

Harper has impressed already in his young career, and he is barely 21. So he has had some growing pains, and plenty of real pain. Harper plays with no guts no glory, on every single play. No matter if it is sprinting out a dribbler to the mound, or slamming in to walls. He plays and he plays very hard.  Which has caused him to miss some time, or even play hurt.

His defensive prowess and speed are near elite, and should keep him moving on the base-paths in 2014. So far things have been good for Mr. Harper, and the future is very bright.

I think a power surge, and legitimate breakout is on its way in 2014. Harper has clearly bulked up this offseason, and that much hyped 40 home run potential, may come to fruition over the next few seasons. Maybe not in 2014, but soon.

He can come close to hitting 30 home runs this season,  80 RBI ad 80 runs, all while maintaining at least his .270 average, and raising his OPS even more.

Having better plate discipline, and playing a little smarter in the field will allow Harper to play in even more games this year, and compile even better numbers this season.

There is no doubt whatsoever, Harper is a late first round, to very early second round talent. If you are in a keeper or dynasty league, you have to have him on your radar, and as a top 5 player.

Where Is He Getting Drafted?

As I mentioned earlier, Harper’s ADP at NFBC is 13 currently, with the highest pick being 4th overall, and lowest 23rd. Plan accordingly, know your formats and remember if it is a Keeper, or Dynasty League you will need to draft him very early.

I will be back with more from the “Mocking The Offseason” series soon at fakepigskin.com. Stay tuned as well for my upcoming Draft Strategy series, Rankings, and more Prospect Profiles over at davidgonos.com. Finally, feel free to send questions my way on Twitter @fantsychillpony and I will answer all of them as soon as possible.