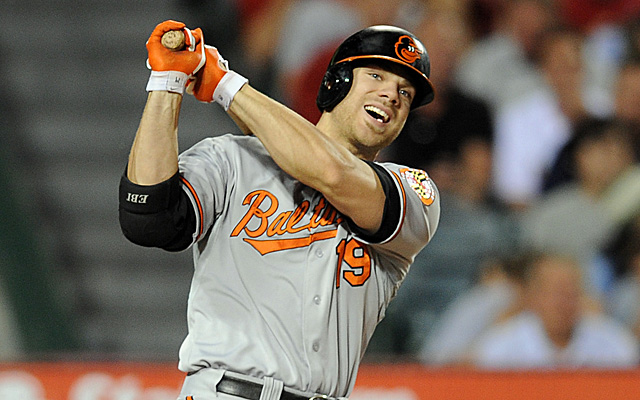 One of the lesser discussed reasons that certain top players are worth passing on is because there’s someone almost identical to them much later. Why take a guy who’s going to hit .285/35/100 in the first round when you can take a guy who can hit .260/35/100 in the fifth (will cover this in my first example)? It doesn’t make sense. When drafting early, you want guys you can rely on that have unique skill sets. Consistency and having an uncommon talent defines an early round pick for me. Here are some guys I’ve seen drafted way too high considering how similar another player is being drafted much later. Watch and learn:

We always knew Davis possessed some serious power. Twice in the minor leagues Davis hit 30+ HR. Then in his first full season with Baltimore, Davis launched 33 bombs. Heading into last year, that’s exactly what we thought he was: an above average power hitter. Well, 53 HR and 138 RBIs later, the industry has a different opinion of him. Why? Sometimes players just get hot for a whole summer and keep it going. Last year was a magical year for him but predicting him to hit 50 in back-to-back years is just crazy to me. Like most players coming off a career year, his numbers will regress somewhat to the mean. I have him pegged for about 35 HR and 100 RBI, which if last year never happened would have been an optimistic outlook. Obviously it did, and I applaud him for it, but a season like that happened for Luis Gonzalez also. Trumbo has now hit 29+ HR and 87+ RBI in three consecutive seasons. Davis had never hit over .270 at the major league level before last season and wasn’t exactly Ichiro in the minors either. Trumbo’s average is just a little bit lower but every other number might be the exact same. I see no point in reaching for Davis inside the top 10 when Trumbo’s ADP is almost 60 spots later. Even if you have to reach a round on Trumbo, the two may end up being the exact same player.

Pujols is on the decline while the Cards’ new 1B is on the rise. Once a sure thing for .300/30/100, Albert hasn’t accomplished that feat since 2010. Pujols hit a career low 17 HR last season and is still dealing with a bad foot. On the other hand, Matt Adams tore up the minors for years and now has earned himself a full time role in one of the best situations in baseball. One young, one old. One going up, one going down. I think you can figure out why this is a no-brainer to pass on Albert to get Adams 84 picks later.

Yelich’s minor league numbers suggest he’s one of the safest batting average bets of any prospect in a while. Having hit .300+ at essentially every level, I’d be hard pressed to project Gordon to hit for a much better average than the Marlin youngster. Yelich was called up last season and hit .288 while adding 4 HR and 10 STL in 240 AB. Gordon’s lack of elite power gives Yelich room to hit a comparable amount of homers. Hitting in front of Giancarlo Stanton, Yelich will have a good chance to score a decent amount of runs. While Yelich likely will have just a tick less in most categories, the two will be incredibly similar. If 5-10 R and 10-15 RBI less isn’t a big deal to you, then wait 90 more picks and scoop up Yelich as a Gordon alternative.

Tanaka is coming to the major leagues with an incredible amount of hype, yet his numbers don’t quite match the publicity. In 2013 with Rakuten (his Japanese team), he went 24-0 but didn’t eclipse an 8.0 K/9. Adjusting to the smaller baseball in the major leagues will be a challenge which will likely result in an even lower K/9. Ryu has already proven he can excel at the major league level with a 7.0+ K/9. Unlike Tanaka, Ryu will be pitching in the National League which basically is a half a run difference in ERA right there. Both pitch on excellent teams so projecting a dissimilar W/L record between the two seems misguided. Tanaka is being way overdrafted at pick 118 considering all the uncertainty. Wait 36 picks to take the pitcher who may end up finishing with superior fantasy numbers.

If you have any further questions or concerns, hit me up on Twitter @RSandersFR.