I’m a big fan or Palmer, but I think he’s going to disappoint you this week – photo from www.azcardinals.com

Carson Palmer will lead the Cardinals out in a really tough game this week as they bid to maintain a playoff run. Palmer was hurt last week and is officially Questionable but he is expected to start. Palmer had a decent game last week but the matchup was very favourable. Those who have used Palmer to lead them to the fantasy playoffs should be warned. I think this week Palmer will have a really rough ride, Tennessee have one of the best pass defences in the league. Add to that 2 of his main 3 receiving options (Housler (doubtful) and Floyd(Questionable) being banged up, I think Palmer may struggle to get over 12 points.

Andre Ellington started last week despite health issues and managed a TD in his once again limited role. Every week it seems Ellington does more with less carries, whilst Mendenhall plods along (against one of the worst rush Defences in the NFL Mendenhall had 17 carries for 41 yards and a goalline score…). If you prefer to rely on volume then Mendenhall may be the better play, as Tennessee allow the 4th most points to RBs. If you want to gamble on Ellington’s limited touches then he certainly has the more upside. This much is clear though, Arians’ refusal to give Ellington 18+ carries is killing his fantasy value. Both remain high flex options this week, but that’s more based on matchup than anything else.

Larry Fitzgerald bagged a TD but Michael Floyd was limited and is questionable for the game against Tennessee. I wouldn’t be too keen on starting Floyd whilst he’s hurt, though I’m a big fan of his usually. Fitz remains a WR2 even against the Titans but Floyd, if he plays, will be limited and is a risky WR3 play. In deeper leagues keep an eye out for Andre Roberts who will likely take Floyd’s targets if he is out of the game.

Rob Housler is doubtful to start, making Jim Dray the starting TE. Don’t start him though, he has nothing to offer a playoff fantasy team.

Cardinals D/ST should be able to put up top 10 numbers this week as they negate Chris Johnson and force Fitzpatrick into passes.

Russell Wilson struggled against the 49ers in a low scoring game (I am very pleased to write that), but he should bounce back against a softer defence this week. One thing I would be wary of is Wilson playing on the road. Almost all of Wilson’s worst few games have been on the road, whilst he is almost unplayable at home. I think Wilson can score on this Giants defence though and if the match is close Wilson can be the match winner. I’d say Wilson is a QB 10-14 this week.

Marshawn Lynch is a fantasy stud. Start him and watch the points pile up. A top 5 RB this week. Goldon Tate and Doug Baldwin both offer upside but a low floor – photo from www.zimbio.com

Percy Harvin is out once more, and doesn’t look likely to be in the frame for a week 16 start either, I would seriously consider dropping him if there’s a guy like Rod Streater on the waiver wire. At this point Golden Tate becomes the best WR in Seattle, though in PPR Doug Baldwin may be a capable flex player. Wilson likes to spread the ball around in Seattle and as such no one player has WR1 value though I think Tate can put up WR2 numbers this week against the Giants.

Luke Willson caught a 70 yard TD pass last week but he isn’t startable. Neither is Zach Miller. Stay away this week.

Seahawks D/ST are the best in football. Start them.

Colin Kaepernick was average in the win over Seattle, though he made several big plays which weren’t worth much in fantasy, including a big run to convert a 3rd down late in the game. Kaepernick should fare better against the Buccs, who allow 18.07 pts to opposing fantasy QBs (10th highest). If CK can get his game together then the 49ers should beat the Buccs comfortably. I’ll go out on a limb and say Kaepernick will score over 24 fantasy points this week, he’s done that only twice all season, but the matchup is good and the 49ers passing offence is completely different with Crabtree and Manningham back in the frame.

Frank Gore has hit a bit of a skid lately, but he looked good against Seattle’s mean run defence, rushing for 110 yards but failing to find the end zone. Gore broke out on a huge run in the first half, but his lack of top-end speed meant he didn’t find paydirt. Gore faces another tough run defence this week, but I think he can score 12-14 points with Kaepernick spreading the ball around and giving him space to work.

Anquan Boldin had 93 receiving yards and is averaging 9 targets per game over his last 4. With Michael Crabtree taking a lot of the coverage away from Boldin (who was the only WR Kaepernick ever threw to), he should continue to see these kind of games, and is a WR2 in PPR.  Crabtree himself hasn’t hit any big scores but has made some plays which suggest his injury is behind him. I think Crabtree is going to go off one week, and this could be it. It’s tough to cope with either Boldin or Crabtree but together they are incredibly hard to shut down. Crabtree is a top end flex option for me this week. Mario Manningham does a lot for the 49ers but not enough to warrant a fantasy spot.

Vernon Davis is on fire, scoring a TD in each of his last 4 games. Start him at will, he is a top 5 TE in this form almost every week.

49ers D/ST are a good start this week against the Bucs, led by Glennon.

Kellen Clemens is not worth starting, even in 2QB leagues I would be hesitant.

Zac Stacy has slowed considerably, and last week had just 25 yards off 14 carries. After such a superb start he appears to have hit a brick wall. Bear in mind his last 2 performances have been against some of the best run defences in the league though. The Saints have a good run defence, but it isn’t elite. If Stacy continues to see 18+ carries as he has in almost all of his starts, then he is always going to be fantasy relevant. I think he scores 16-20 points this week as the Rams will need to run the ball against the Saints to get some points and give Clemons room to work. 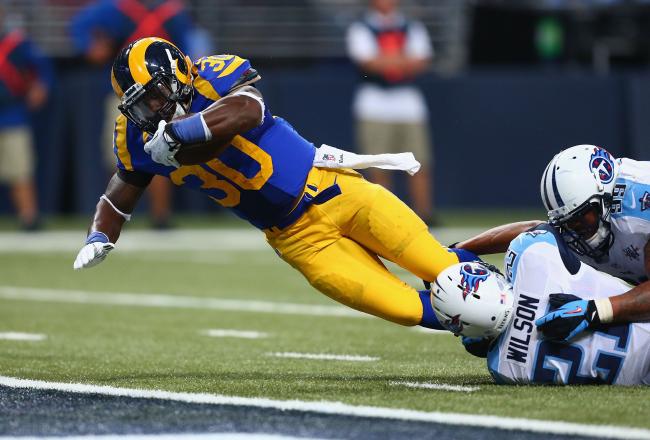 Stacy has struggled lately but should be back on form against the Saints – photo from bleacherreport.com

Jared Cook is not worth risking your fantasy season with. Keep him sat this week.

Rams D/ST v the Saints is a nightmare waiting to happen. Even if you are a Rams fan, I urge you to bench them and start anybody else.