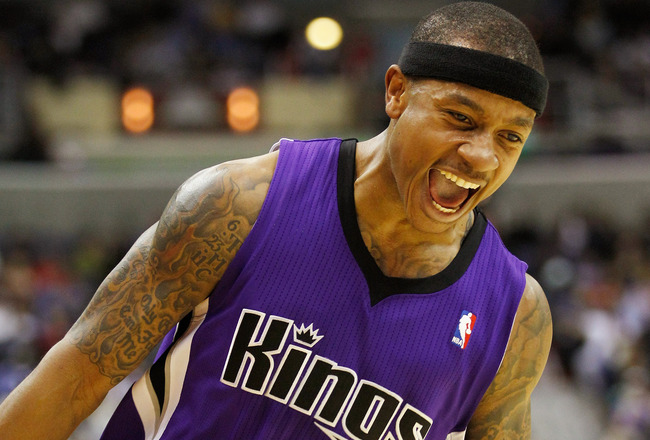 A monumental trade went down yesterday, all kinds of injuries have been plaguing the NBA and now there are rumors that Mike Woodson is on the hot seat. Man, the NBA is as happening as ever, isn’t it? Of course, tonight is no different.

Six games on the slate tonight. According to our friends over in Vegas, only one game looks to have spread within four (Washington/Denver). Interesting that Denver would be within one on the road with Ty Lawson already ruled out (some food for betting thought). Our highest over/under is Philadelphia/LAC with a line of 208. Two games are within four projected points of that one: Dallas/Sacramento at 206 and Portland/Utah at 204. As always, I prefer to pick from the higher scoring games if I can. As a result, two of my recommendations are from those three games tonight, but one of them is not. Every night, someone from one of the lesser games goes off, and I think I have found you a bargain tonight.

As always, if you need any more information or have any questions on yearly leagues, shoot them to me @RSandersFR on twitter. Now, let’s get to today’s picks! Here are the guys I will have in my lineup tonight and ones I will be throwing out from my list of possibilities. All prices are based on my favorite daily site (Draftkings).

Chris Paul – $9,500 – The best point guard in basketball matches up against the worst defense in the game. Sounds pretty enticing, huh? Oh by the way, Philadelphia will be without their starting point guard Michael Carter-Williams, who is the king of the pick-pocket this season. CP3 vs a backup just isn’t fair. Considering he is averaging 15.8 PPG, 11.3 AST and 2.2 STL in his last 6 games (against mostly first stringers), he should be in line for A MONSTER tonight.

Marcin Gortat – $6,400 – On most days, Gortat is just your average, run of the mill center. He produces nearly a double-double with a steal every few games and 1.5 BLK per contest. Tonight, however, his counterpart in the middle will be inactive. Unfortunately, Nene will not play due to a multitude of injuries that he wants to “take his time with.” Therefore, Gortat will not only get his, but should take some of the looks that were going to go Nene’s way. Don’t be fooled by the mediocre numbers, Gortat has a solid post game and can score on a pick-and-roll. John Wall has been very generous with the dimes lately, so I expect a double-double, and not one of the minimum requirements variety.

Isaiah Thomas – $5,900 – My play of the night is none other than IT2. The Rudy Gay trade yesterday made all kinds of noise, but quietly the big winner was Thomas. Sacramento sent Greivis Vasquez packing out of town and Thomas’ competition for minutes along with him. Even with Greivis in town, Thomas was the best PG on the roster. Just look at his numbers; he was averaging 17.8 PTS, 4.9 AST and 1.4 STL in under 28 min. From here on out, it’s time to shine Isaiah. Seriously, the sky is the limit for the talented, undersized IT2. It all begins tonight. Get him while his price is still cheap because it will soon be up there with the near-elites.

Rudy Gay – He’s not even listen on Draftkings yet, but even if he makes it to the list, he’s going to be overpriced. I don’t like guys playing the first game with their new team and I’m not even sure if he’s going to suit up. Until I see my first 20+ point game from him in a Kings uniform, I will not pay the $7,000+ price.

Trey Burke – $5,800 – Last time these two teams (Utah/Portland) met, Portland blew them out 130-98. Burke only played 16 minutes partially because of the score, but also because Damian Lillard beat him like a drum every play. If Burke can’t find any changes in game plan to stop Lillard, Ty Corbin is not going to let him play. Lillard scored 21 PTS in the first half alone that game. Oh, and not to mention, Burke was just 3-9 with 7 PTS and 1 AST on the offensive end. Portland does not present a favorable match up to Utah or Burke, so despite the decent price I think you have to avoid him.