Carson Palmer is throwing a tonne of picks lately, so unless your league doesn’t subtract fantasy points for them then it’s always going to be tough to peg him in – even if your other choice has a bye. However he does still throw the ball a lot (6th most in the league). This could always translate to points if he can get more accurate. Atlanta are allowing just over 20 pts per game to fantasy QBs, but I think Palmer’s protection is the key to his fantasy success and with Osi Umenyiora and company bearing down on him, I can’t see a successful outing here. Palmer may flirt with QB14-16 numbers but no more.

Andre Ellington was massively underutilised against the Seahawks, making for a very frustrating game if you started him. However Mendenhall shouldn’t eat into his carries this week as he’s doubtful for the game on Sunday. Ellington is looking at RB20-24 this week, with upside. I don’t think he’ll see over 15 carries. Stepfan Taylor would be the backup here but he’s likely not worth a start in all but the deepest leagues. Ellington has earned more touches but HC Bruce Arians appears reluctant to give him the load in Arizona – photo from www.fansided.com

Larry Fitzgerald is still Palmers only real outlet at receiver so whilst you have to prepare for disappointment, he’s worth a mid flex start this week. Floyd is worth owning, and likely only a WR3 in 16 team leagues this week. Roberts should sit.

Jim Dray and Rob Housler aren’t worth owning. Housler had his best outing last week, 5.3 points. He’s not doing anything like we all thought so bin him now and get another TE.

Cardinals D/ST shouldn’t be started this week against the Falcons, even with a missing Julio Jones.

Colin Kaepernick had a much better this week, adding 68 rushing yards and a score on the ground to bolster his score of 18.76. If Kaep continues to use his feet he is going to have QB1 upside this week. I like him as a QB5-8 this week, and he should get close to 20 points again.

Frank Gore reached over 100 all-purpose yards and a couple of scores last time out, and continues to be consistent, scoring under 10 points just once all season. The Jags are terrible against the run and Gore should get 100 yards on the ground this time out. He’s got a high floor of around 8 points and should get around 14 in all honesty. Sart him as a good RB2.

Anquan Boldin has seriously quietened down since his storming opener, but fear not, as he is still a big part of Kaepernick’s play. In PPR leagues he’s a high flex choice, and non-ppr should give him a low flex option. He’s going to catch 3-4 balls per game and against the Jags I like him to score a TD as well. I’ll project 14pts this week.

Vernon Davis now has 40 points over the last 3 weeks and 6 receiving touchdowns for the 49ers, the most on their team by a long way. Start Vernon this week as a top 5 TE.

Vernon Davis has forged a lethal combination with Kaepernick and is a top 5 TE for the remainder of the season – photo from www.isportsweb.com

49ers D/ST should be in for a D/ST5-8 performance this week against the Jags in London.

Sam Bradford has impressed me in in fits and spurts this year, but I’d be wary of expecting him to lead your fantasy team this week. He’s going to be facing the best defence in football this week, and anything over QB16 numbers would be a good turnout for the Rams triggerman.

Zac Stacy is averaging around 10 pts per game in the last 3 games, but he is facing his biggest defensive challenge yet. Stacy could be a flex option this week though as he does offer an outlet to Bradford in the passing game too. Daryl Richardson is still ownable but he’s not getting the snaps to warrant starting, especially this week.

Brian Quick was the only Rams WR to score over 3 pts this week, largely due to a big reception of 73 yards. Don’t rush to pick up Quick, and don’t rush to start any Rams WR this week. Austin is entering bust territory, and Givens and Pettis seem to have had a pair of big weeks but little else.

Jared Cook is still very disappointing and I’d be willing to drop him in 12 team leagues. Kendricks is far too reliant on TDs to warrant owning or starting.

Rams D/ST are not worthy of starting this week, even in 16 or 20 team leagues.

Russell Wilson was outstanding against the Cardinals, showing poise, leadership, awareness and physical skills in front of the nation on Thursday Night Football. He is going to be a great QB for a long time and is a fine fantasy QB as well. This week he should comfortably reach 15 points and could add another 10 with some rushing attempts thrown into his passing game. 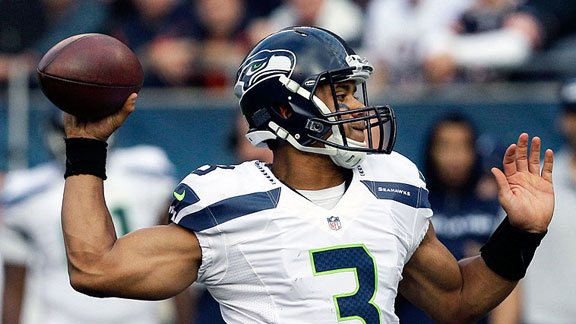 Wilson is just as electric for your fantasy team as he is for the Seahawks – photo from www.espn.go.com

Marshawn Lynch is the second best fantasy RB in football at the moment and facing a super soft run defence everything points to a monster game for him this week. Even backup Robert Turbin could be worth a low end flex spot.

Sidney Rice showed his face again last week and grabbed an early TD in the Rams game. Him and Golden Tate are the best WR options out there but a team more focused on rushing will render less than spectacular fantasy WRs. Both are worth a flex start this week, but neither appear to offer stability on a weekly basis. Note: Percy Harvin is out this week.

Zach Miller caught 5 passes including one touchdown last time out but his fantasy value is definitely restricted. This season he’s had 3 sub 5 point performances, been out twice and had two 10+ performances – Not the kind of fantasy TE you want to start, though owning him is not out of the question in deeper leagues.

Seahawks D/ST should be started as a top 10 D/ST this week.