The Premier League is coming to a hectic and enthralling conclusion, and it would take a brave soul to bet on what the outcome may be. Sunderland have 2 games in hand against most of their relegation rivals, but with their indifferent form will they be able to put them to good use? Manchester City similarly have 2 games in hand on their title rivals, but will it matter if they can’t stop Liverpool’s seemingly inexorable scoring machine at Anfield?

More importantly, what players can help push YOUR team towards a fantasy title, regardless of their position in the league? Here, we look at some studs and duds for gameweek 33.

In his last 6 Premier League games, Bony has had a direct hand in 6 goals, scoring 4 and assisting another 2. Bony’s start to the season was hardly the most auspicious, but after improving his European form in the second half of the season, he has managed to transfer that to the Permier League. Still just 25 and with plenty of score to adjust more the English game, Bony looks to be one of the league’s most exciting strikers heading into next season (provided Swansea can cement their Premiership status). Swansea have scored in each of their league games since the 2-0 reverse against West Ham on the 1st of February, and while it’s difficult to pin down if the team’s sudden lease of life is a result of Bony’s play or vice versa, the fact remains that Bony is playing great football to help his team, as well as yours. With a price tag of just £7.2mil on fantasy.premierleague.com, Bony should be in your lineup this weekend. 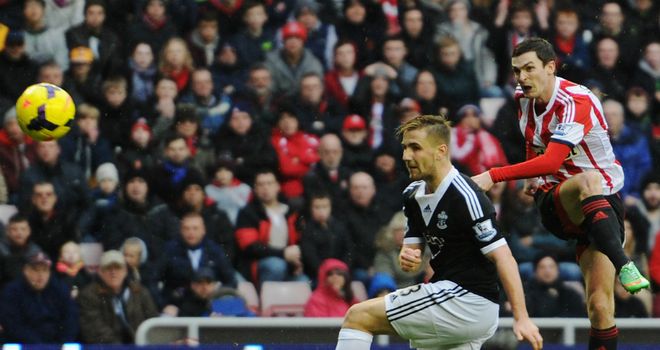 After coming on as a substitute against West Ham, scoring, and proving once again that he is unequivocally Sunderland’s best player, Johnson should be in line for a start against Tottenham on Monday. The former Man City winger is Sunderland’s top scorer, and will face up against a Spurs side which hasn’t kept a clean sheet in 10 games (both European and domestic). As a point of reference, Johnson’s £6.5mil price tag (again fantasy.premierleague.com) is almost £3mil less than Santi Cazorla (£9.4mil), who has one assist and 0 goals in his last 5 games. Johnson will be looking to make a late push to make England’s squad for the World Cup, and against Tottenham’s defensively shaky (to be diplomatic about it), Johnson has a great chance to look like he belongs on the biggest stage of all.

Luke Shaw is one of the most exciting young players in English football, and should be a mainstay as a top Premier League and international player for a long, long time. He has performed exceptionally in his first full season, and deserves all the plaudits coming this way. However, this week, we can’t recommend starting him against a Manchester City team chasing a league title and a (quite probably) returning Sergio Aguero. Even if Aguero doesn’t make an appearance, City’s plethora of attaching riches mean it’s exceptionally unlikely Southampton get close to keeping a clean sheet. City have also conceded just 9 goals at home this season, so it’s unlikely Shaw will add to his 0 goals and 2 assists to this point. We love Shaw, just not this week.

In a season contrasting Bony’s almost exactly, Giroud has gone off the boil considerably after making a blistering start to the campaign. Since his brace against Sunderland on the 22nd of February, Giroud has netted just once in the following five games. This week, Arsenal travel to Everton in a match bearing huge consequence on the 4th and final Champions League qualification spot. Everton have won 8 of their last 9 league games at home, Arsenal have won only 1 of their last 5 matches away from the Emirates. Having Aaron Ramsey back will help Giroud, but it’s unrealistic to expect the Welshman to have a huge impact upon his return from injury (if he even starts at all). Look for Giroud’s indifferent form to continue.