That’s right, you read correctly, and it’s not an overstatement. I said brand new superstar Alexander “The Mauler” Gustaffson. This will be Alexander’s first appearance since losing a razor thin decision to current Light Heavyweight champion Jon Jones this past September. The five round title fight became an instant classic, and was voted “Fight Of The Year” by basically every major MMA website. Despite losing it did prove that the quiet 26 year old Swede has fully arrived on the national scene. I honestly haven’t seen a fighters stock go up this much in a losing effort since 1976 when Rocky Balboa went the distance with Apollo Creed in the original Rocky. Alexander was as high as a 7 to 1 underdog heading into the world title fight against Jones. The whole match up felt like Alexander was surprisingly plucked into the title fight, mostly because Jon wanted to prove a point about picking on guys his own size for once. Everyone except Gustaffson and his camp expected Jones to walk right through the challenger, but I guess that’s why fights are fought in the octagon and not on paper. Gustafsson surprised everyone by stuffing all of Jones’s takedown attempts through out the five rounds, and showing off his impressive hand speed while they were standing up. In the end however he came up just short on the judge’s scorecards. There remains a healthy contingent of the MMA world out there that still thinks it was a bad decision, and he is the rightful champ. In order to give the fans the rematch they want to see he has to beat the largely unknown Jimi Manuwa in the UFC Fight Night main event. To make things harder on the Swede he has to beat Manuwa in his home country, the U.K. But make no mistakes about it, the real draw here for everyone but the British faithful is Gustaffson. He is already penciled in for another shot at UFC gold if he can take care of business Saturday. After his instant classic against the seemingly unbeatable Jon Jones, he is now considered must-see T.V. 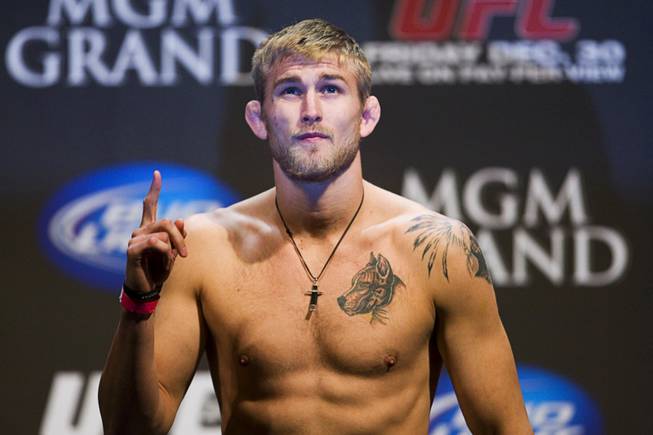 The U.K faithful have been talking about Jimi Manuwa and his petrifying knockout power since 2009. He now gets a chance to make his people proud as he takes on Alexander Gustaffson in the Main Event of UFC Fight Night 37. While he is still largely an unknown to most causal fans, his record is filled with devastating first round knockouts. Albeit against mid to low tier competition. Jimi didn’t start his MMA career until he was 28, and he is now 34, so if he’s going to make a memorable splash the time is now. The UFC is obliging him with a step up in competition, throwing him right into the very deep end of the division.“The Poster Boy” will walk in a massive underdog against Gustafsson, and right fully so. But he does have the power in his hands to shock the world with one clean punch if he can connect against the rangy Swede. The fans in attendance will be cheering on their countryman Manuwa, but can he prove all the hype surrounding him for years is warranted? Personally I think Jimi is in a win-win situation, if he even makes this a slightly competitive fight his stock can only go up. If he was able to pull off the gigantic upset however, he may be only one more signature win away from a title. When there are only 4-ounce gloves involved, upsets have a funny way of rearing their head. Everyone likes a good upset and with the power Jimi packs, he may be worth waging a few bucks on.

In the fight game the terms “explosive,” ‘dynamic,” and “blinding,” get used way too often, when they really shouldn’t be. I promise you this isn’t one of those times. When Melvin Guillard meets Michael Johnson in the Co-Main Event of the fight card, you will be seeing two of the most athletically gifted fighters the promotion has to offer. In many ways Guillard and Johnson are mirror images of each other. They are both undeniably talented, but very inconsistent. They are both undeniably talented, but very inconsistent. They both can end fights with lightening speed, and in an incredibly violent fashion. Yet both tend to find ways to get submitted in fights they’re both well in control of. Guillard has been in the game a lot longer than Johnson so maybe his ceiling isn’t as high as Michael’s is. At the same time maybe at this point of Johnson’s career, Guillard may very well be to seasoned for the up and comer. These two did train together for almost two years with the “Black-Zillans” fight team before Guillard decided to leave for a different camp; so they are certainly familiar with each other’s overall game. This bout was originally scheduled to be a rematch of Melvin Guillard taking on Ross Pearson before the Britt had to pull out due to injury and Johnson stepped in. While I’m sure the U.K faithful wouldn’t have been against cheering for their countryman Pearson, I think deep down inside they know they got the better fight here. This is one of those fights where it’s really, really hard to see it being anything other than a barnburner, so yes I am very giddy to watch these men square off. I have no idea which way to lean here, so I plan on not over thinking it and try to just keep up with both men’s blinding speed.

If you’re a real fight fan, it’s hard not to love Brad “One Punch” Pickett. The guy moves forward with reckless abandon throwing punches from his waist and seems to always deliver action; win or lose. But of course like with most of our favorite “all-action” fighters, his reckless style has cost him a few losses and a lot of damage along the way. After taking some brutal losses at 135-lbs, he now attempts to reinvent himself as 125-lb fighter at the slightly advanced age of 35. The reason this drop down to Flyweight is a pretty big deal is because he already owns a 2010 victory over the current 125-lbs champion, Demetrious “Mighty Mouse” Johnson. Pickett was originally scheduled to make his Flyweight debut against ranked contender Ian McCall, but because of injury he now takes on Irish stand out Neil Seery. Thanks in large part to already having a win over “Mighty Mouse,” and his always fan friendly style he could find himself in a title fight by the end of 2014. Assuming of course he safely makes the drop down to 125-lbs. Anytime Pickett is on a card he is must see TV fan for MMA fans, particularly now that he is again in the midst of meaningful title contention.

No, Gunnar Nelson doesn’t need a win to save his job with the UFC. However the undefeated prospect has lost a lot of his hype as of late.  The 11-0 Iceland native was being talked about by MMA legend Renzo Gracie, as the guy who was going to beat Georges St-Pierre when he got to the big show. Renzo wasn’t alone, everyone who trained with Nelson said he was the real deal, and he was going to take the UFC 170-lb division by storm. Since his UFC debut in 2012, he has only fought twice, and so far he hasn’t really blown down any doors. Sure he made quick work of DaMarques Johnson in his debut, but Johnson was woefully outmatched. In his last fight more then a year ago, Nelson looked very beatable against Jorge Santiago. He picked up the first decision victory of his career, and he also looked very hittable in the process. Since that fight injuries have kept the prospect on the sidelines and he now fights for the first time in 13 months. Sure even if he loses Saturday against Omari Akhmedov, Nelson is still only 25. He still has a lot of time in the sport to develop and carve out a meaningful career in MMA. But he does really need a statement win to remind the average fan why he was supposed to be a big deal when he signed on with the UFC in 2012. Out of sight, out of mind right? I’d say he needs a very impressive performance more than almost anyone else on the card at this point. Can he deliver against a very tough and composed Russian opponent? This is the downside of lofty expectations; the fans use them to measure you. Can Nelson come out and deliver on a main card spot Saturday night?  I think he certainly has too.