Behind The Helmet: Branden Oliver 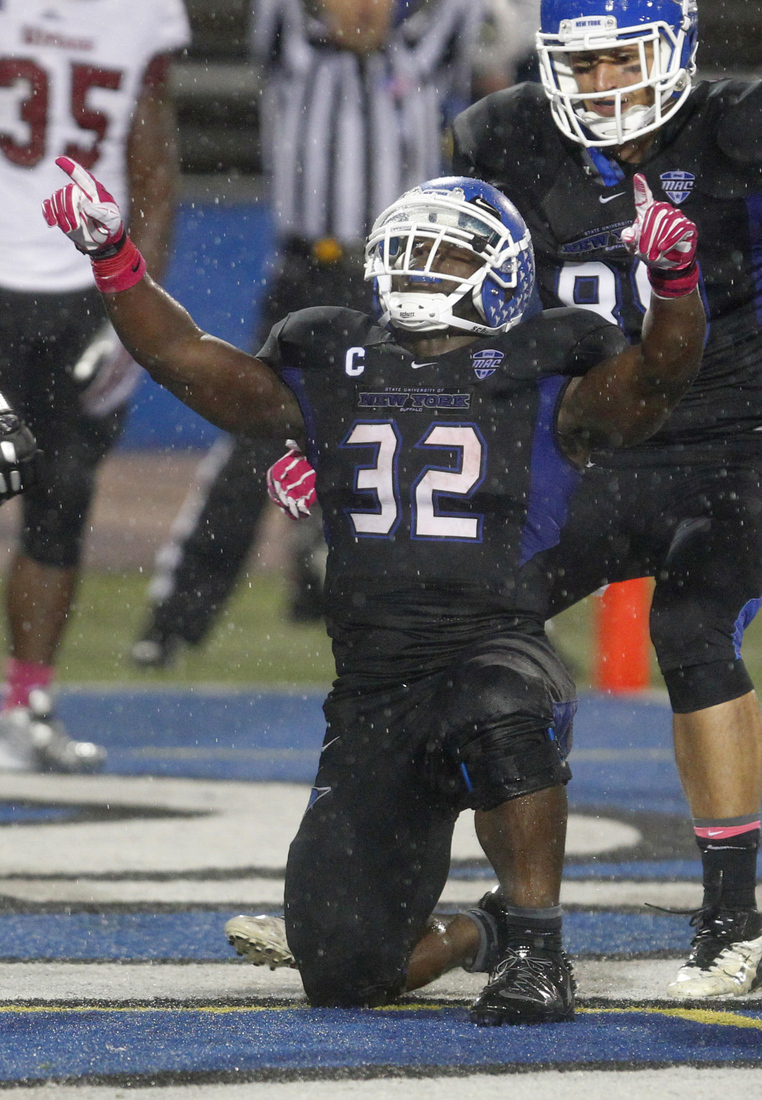 The Buffalo Bulls 2013 All-Mid-American Conference first-team player Branden Oliver is a product of Southridge High School near Miami, Florida. “BoDozer” is Oliver’s nickname around campus,  and he set records across the board in 2011: rushing attempts, all-purpose yards, and 100 rushing yards in consecutive games.  In 2012, Oliver suffered a significant injury, a grade-two MCL tear vs Kent State, and it caused him to miss five games and hinder him in four others. The 5’8 running back was back on track in 2013 posting 1535 yards on 310 carries an averaging 4.95 yards per carry while adding 15 touchdowns. Oliver is a man of deep faith, and attributes God for giving him this opportunity. Branden Oliver was extremely generous in giving me his time for a short interview.  A big thank you goes out to Brandon!

Ok, first off, I’d like to thank you for taking the time for this interview.

“I thank my Lord and Savior Jesus Christ for giving me this opportunity.”

That makes two of us. I must ask you about #Olivering and how it came about??

“I told God after my injury I would give him all the honor, praise, and glory when I got into the end zone no matter what the circumstances were, and I believe I’ve seen Adrian Peterson do it a couple times too.”

Always thankful/ big fan of it. What made you decide on attending Buffalo?

“Cool and Buffalo was my only offer.”

Oh, I wasn’t aware of that.  With that said, your recruiting class had Lamar Miller as well; how much did that motivate you or put a chip on your shoulder?

“Growing up in Miami it’s so competitive so you really don’t have a choice but to compete at your highest ability, and I always have a chip on my shoulder because I’m usually overlooked.”

An athlete with a chip on his shoulder is always dangerous. Did James Starks ever reach out to you after you broke his single season record?

He knows talent! Two questions left. Your cousin being Roscoe Parrish, has he been able to help you through this draft process?

“Nah, I’ve never really been in contact with him, I’ve tried plenty of times through my mom but no go.”

That’s a bummer, Since you are a Heat fan correct? Since I’m from Cleveland, it’s only fitting to ask you about Lebron coming back home??

“Lol yea I’m Heat fan but D-Wade has always been my favorite player since he stepped into the league and honestly, I don’t think Bron is leaving. But if he does I believe Wade will go back to doing what he used to do.  I don’t think his knees really hurt that bad, I believe it’s just Bron being the best so Wade doesn’t have to do much ’till crunch time.”

He does seem to have aged rather quickly, that’s all we have in Cleveland is hope. Well that’s it, you’re a class act, and I wish the best for you and your future. Thanks again — much appreciated.

“No problem man, thank you and God Bless.”

I’d like to extend another thank you to Branden Oliver for his time, very appreciated. Wish him the best moving forward!